Pathology courses are taught to undergraduate medical students to provide them with basic foundation for clinical sciences. However, there is hardly any form of assessment of how relevant and helpful these pathology courses are to the students in the clinical years and even beyond. The authors set out to determine the extent of use of the knowledge of pathology in students' appreciation of clinical medicine. The study involved final year medical students recruited from four accredited medical schools in Nigeria. Data was obtained using self-administered semi-structured questionnaires. A total of 310 final year medical students with mean(standard deviation) age of 22.5 (3.8) years participated in the study. Most useful pathology courses versus clinical courses for respondents were: 155 (50.0%) Morbid Anatomy and Haematology vs Obstetrics and Gynaecology; 181 (58.4%) Haematology vs Paediatrics; 239 (77.1%) Morbid Anatomy vs Surgery; and 246 (79.4%) Haematology vs Medicine. The proportion of respondents who indicated interest to pursue a career in pathology was 83 (26.8 %). Pathology remains relevant and very useful for students' understanding of clinical courses. However, further work needs to be done to elucidate steps required to attract the younger generation into this branch of medicine.

Pathology may be defined as the science of the causes and effects of diseases, especially the branch of medicine that deals with the laboratory examination of samples of body tissue for diagnostic or forensic purposes(1). It also refers to the study of abnormal anatomy, biochemistry, and physiology at gross (organ), tissue, cellular, biochemical, and molecular levels; for the purpose of diagnosis and management of diseases.

A good knowledge of pathology is essential to effective clinical practice. It is a medical specialty which deals with pathological processes underlying disease processes. In many medical schools, it is incorporated into the undergraduate medical school curriculum in the third or fourth year. Pathology generally has four arms/branches which are Chemical/Clinical Pathology, Haematology, Morbid Anatomy, and Medical Microbiology. Medical students are trained in these four areas while studying pathology as a basic and compulsory requirement for proceeding to the clinical courses. It thus serves as a first introduction to human disease processes in the undergraduate years.

Haematology: This is the branch of medical science concerned with diseases of the blood and blood-forming tissues(3). It deals with current and evolving knowledge of the pathogenesis, clinical and laboratory features, management and treatment of a wide range of blood and bone marrow disorders.

Morbid Anatomy: This is also known as Anatomic or Anatomical Pathology. This medical specialty is concerned with the diagnosis of disease based on morphology of cells and tissues, the macroscopic and microscopic examination of organs and tissues(4). The procedures used in Anatomic Pathology include gross and microscopic examination, immunohistochemistry, cytopathology, tissue cytogenetic, and in situ hybridisation among others.

Medical Microbiology: This arm of pathology works to support and oversee the prevention, diagnosis and treatment of illness caused by microorganisms (viruses, fungi, and parasites). Medical microbiologists strive to identify the best treatment for particular infectious diseases and give advice on the best samples to collect and also the technique of the sample collection to diagnose an infection, such as a swab, blood, cerebrospinal fluid or urine test(5). Medical Microbiology is also strongly integrated in the study and identification of strategies to combating antimicrobial resistance.

Evaluation of students' perception in the use of pathology is essential to ascertain their knowledge and understanding of the information passed in the course of pathology teaching. There is indeed a dearth of data in Nigeria regarding this subject. It is important to know if students have acquired adequate knowledge to help them in their clinical courses and how effective the knowledge gained is in aiding understanding of clinical courses.

In line with this evaluation, a study(6) in the United Kingdom has reported that the majority, 47(67%) trainees in their study felt that their undergraduate courses had not prepared them for their membership exams, and that they were disadvantaged in having to learn pathology from first principles rather than build on the basics they hoped to know already.

In terms of career choices among medical students, previous studies(7-10) both within and outside Nigeria, have documented low preferences of pathology as a career when compared with other sub-specialties. However, there is yet to be a description of the students' choices among the various components of pathology.

This study therefore aims to explore the extent of the use of the knowledge of pathology by medical students in their clinical years, and go further to characterise the pattern of students'career choices among the various components of pathology. This will help to provide much needed data and fill the currently existing gap in literature on this topic, especially in Nigeria.

Participants were recruited from the final year medical students of the participating universities who had been exposed to all aspects of clinical medicine. Data was collected using pretested self-administered semi-structured questionnaires. The questionnaire used was designed by the researchers. Participants completed the questionnaires after the purpose of the study was explained to them and confidentiality of data assured. The questionnaires were pretested using ten students, and then assessed for completeness of data, ease of filling the questionnaires, clarity of questions and appropriate response options. The final draft of the questionnaires used for data collection assessed socio-demographic characteristics like age, sex, institution and class of study. Seven questions were used to assess use of knowledge of pathology while two questions assessed possibility of pursuing a career in pathology.

Informed consent was obtained from participants and ethical clearance obtained from University of Nigeria College of Medicine Research Ethics Committee.

This was done using SPSS version 20. Continuous variables were presented as mean, standard deviation (SD), number and percentages while categorical variables were presented in frequency tables as counts (number) and percentages. The Chi Square (χ2) test of statistical significance was used to determine the relationship of age, sex, institutions, and career interest in pathology. All p-values were bidirectional, and a p-value<0.05 was considered statistically significant.

A total of 310 final year medical students participated in the survey giving a response rate of 74.2%. The age range among participants was 20 – 38 years with mean [standard deviation (SD)] of 22.5 (3.8) years. There was a slight male sex preponderance with a male (M) to female (F) ratio of 1.4 to 1, with males making up 58.7% of respondents. Majority were in the 20 – 25 years age group as shown in Table 1. Distribution of respondents according to institutions is as shown in Figure 1. All respondents were in the final year of study and have gone through all clinical postings. 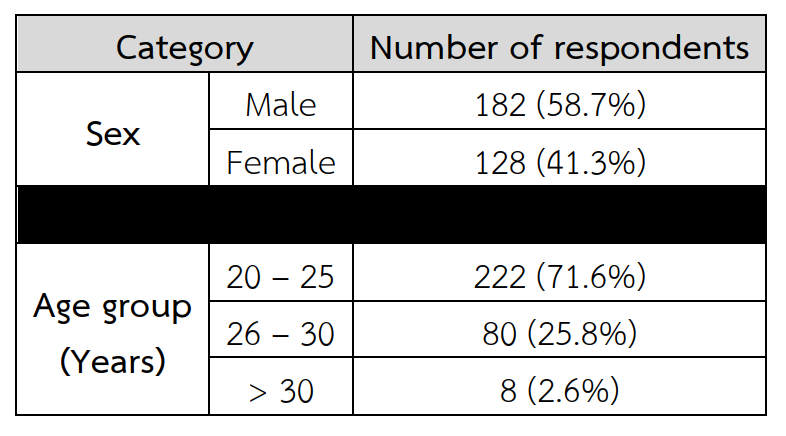 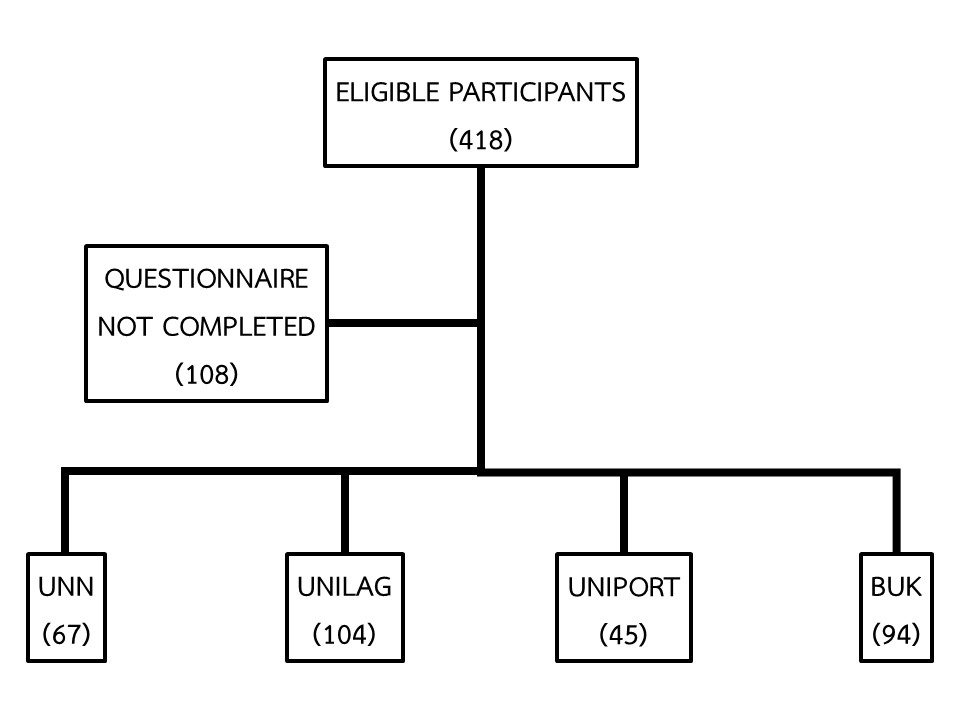 Of the 4 Pathology Departments, majority 273 (88.1%) stated that they enjoyed Haematology courses most. In responding to how often they encounter pathology in clinical courses, majority 251 (81.0%) indicated encountering Morbid Anatomy most often. Most respondents 224 (72.3%) revised Haematology after leaving pathology class.These are outlined in Table 2. 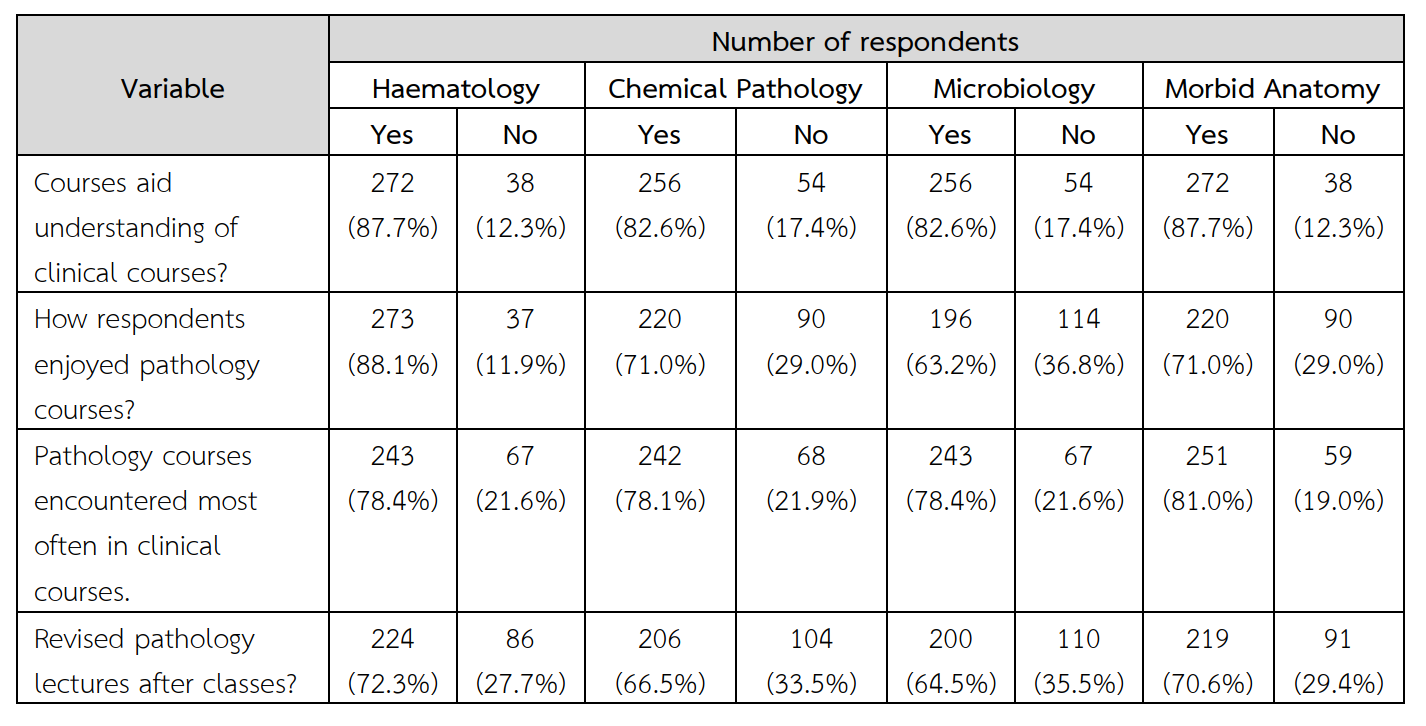 Table 3: Response of 310 participants to the most useful pathology courses in clinical classes.

Table 4: Area of concentration in event of re-learning pathology courses of 310 respondents. 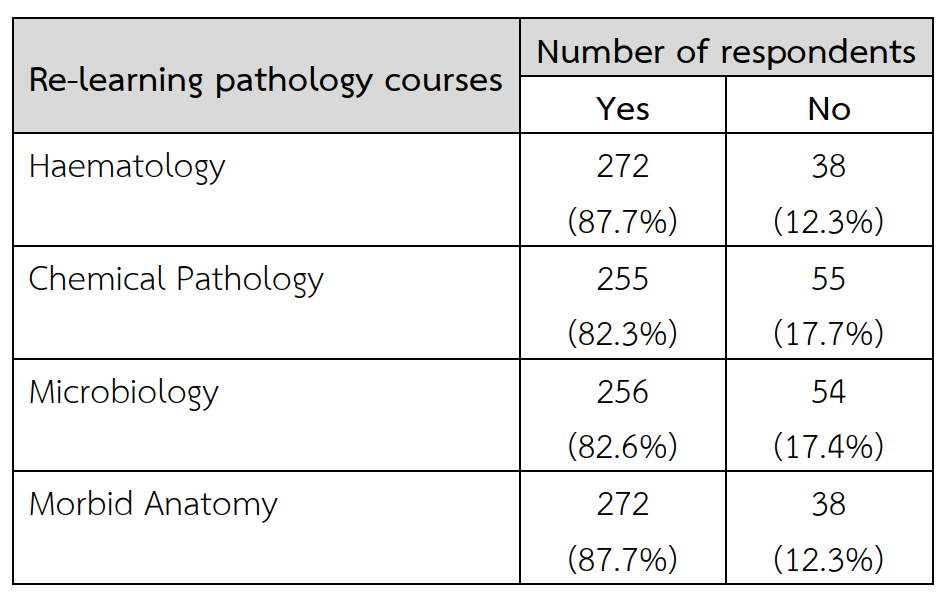 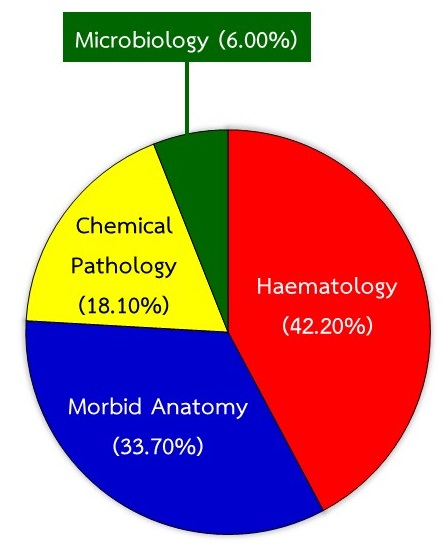 Figure 2: Potential career choices of respondents according to departments.

Table 5: Relationship of age, sex, institutions and career interest in pathology of 310 respondents. 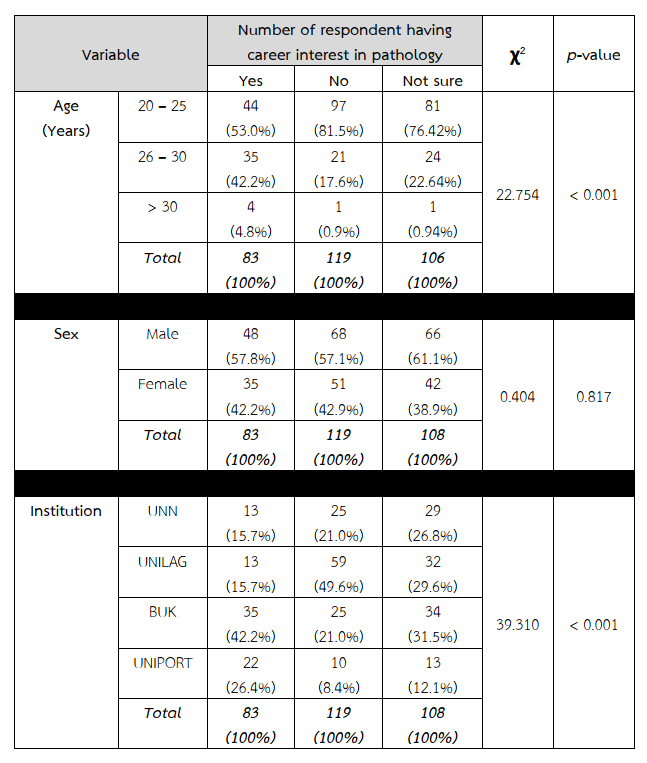 In the present study, there was a slight male preponderance among respondents. This is in agreement with other studies(9-11) carried out among medical students in Nigeria, and America(12) till 2017 when the trend changed in America with female medical students enrollees being more than their male conterparts(13). This is not surprising as medicine has long been a male-dominated profession.

The proportion of respondents who enjoyed Morbid Anatomy was 220 (71.0%). This contrasts with 65.5%(14)and 64.3%(15) of participants reported in two different studies who found Morbid Anatomy interesting. The course mostly enjoyed by participants was Haematology and this probably might have influenced their career choices as majority of those who indicated interest to pursue a career in pathology chose Haematology. This is equally a good feedback for the lecturers in Haematology as it seems that their positive influence may have translated into stimulation of career interest in students. Another explanation to this may be that out of the four arms of pathology, Haematology is mostly involved in direct patient-care as it often has the highest patient load when compared with Chemical Pathology and Microbiology which are also involved in direct patient-care. As medical students often view medical practice as basically direct patient-care, their career choices are usually influenced along that line.

The proportion of respondents who indicated interest to pursue a career in pathology is higher than 2.0% recorded by Ossai et al(9) in 2016. This could mean a renewed interest in pathology as a career choice among medical students. Again, the wider coverage of the current study might account for the difference. A statistically significant greater proportion of respondents from BUK indicated interest in pursuing a career in pathology. This is commendable on the part of pathology lecturers in BUK for stimulating their students' interest as pathology has long been a specialty with low students' career preference.

Though there is a dearth of data on this topic but among the four arms of pathology, Morbid Anatomy has been the most widely studied in terms of students' career choices. The reason for this is not clear but this observation might encourage researchers in the other arms of pathology to carry out more research in their respective specialties. In the current study, 33.7% of participants indicated interest to pursue a career in Morbid anatomy. This is higher than 12.7%(14) and 21.3%(15) recorded by previous researchers in Nigeria. The study by Vhriterhire et al was done in two institutions in the same geopolitical zone of Nigeria while the study by Ojo et al was carried out in a single institution, and these could account for the differences seen. However, the higher proportion of participants who enjoyed Morbid Anatomy as a course and those who indicated career interest in Morbid Anatomy in the current study is a positive picture which may depict renewed interest among students in Morbid Anatomy. Most respondents indicated they would concentrate on Haematology and Morbid Anatomy if they were to re-learn Pathology(Table 4). This could be explained by the observation that both courses were the most cited in responding to the question on the most useful pathology courses versus clinical courses(Table 3). The observations captured in Tables 3 and 4 give great insight to how much pathology courses aid students in appreciation of clinical courses, hence this study calls for more emphasis to be placed on the teaching and learning of pathology by both lecturers and students.

The study of pathology remains very fundamental in medical education. However this study portrays the rubrics of the relationship between pathology and clinical courses in terms of students' perception and use of knowledge gained in clinical years. Again, though previous studies have demonstrated low interest in pathology as a career choice but this study goes further to characterise medical students' pattern of career choices between the four arms of pathology.

Strengths and Limitations of Study

It would have been interesting to know the factors influencing the career choices of the respondents. However, despite these limitations, the major strength of this study is the multi centre representation of four major geopolitical zones in Nigeria.