Protective effect of angiopoietin 2 on cardiomyocytes against simulated ischaemic injury

Angiopoietin 1 (Angpt1) and Angiopoietin 2 (Angpt2) are vascular growth factors that play important roles in vascular angiogenesis and adult vasculature maintenance. Previous studies reported that Angpt1 reduced the size of myocardial infarction in in vivo myocardial infarction experiment in rats, while Angpt2  protein levels increased in myocardial infarction areas. However, it is not clear whether the role of Angpt1 and Angpt2 protect ischemic cardiomyocyte. This research aimed to examine the effects of Angpt1 and Angpt2 on survival of cardiac myoblast cells (H9c2) after ischemic simulation. Initially, H9c2 cells were cultured and pretreated with Angpt1 and Angpt2 at the concentrations of 400, 600 and 800 ng/mL. After the pretreatment, the cells were exposed to simulated ischaemic solution for 90 minutes. Angiopoietin toxicity and cell viability analysis were performed. The results showed that pretreatment with Angpt2 at the concentration of 800 ng/mL significantly increased the cell viability compared to that of the stimulated ischaemic group (p < 0.050). However, there was no significant different in the cell viability between Angpt1 pretreatment and the control group. In summary, pretreatment with Angpt2 works as a cardioprotective molecule in the context of cardiomyocyte ischaemia.

Ischaemic heart disease is one of a leading cause of death globally. Treatment of myocardial ischaemia is a restoration of myocardial blood flow to the heart muscle or reperfusion. Myocardial reperfusion techniques including percutaneous coronary intervention and antiplatelet and antithrombotic agents has been intensively developed to restoration of myocardial blood flow. However, the protection of myocardial injury after ischaemia is still required. From previous studies, it has been reported that angiopoietin-Tie system plays an important role in vascular angiogenesis, vascular quiescence, and vascular survival. Angiopoietin (Angpt) is a ligand of Tie receptor and consists of four subtypes; Angpt1, Angpt2, Angpt3, and Angpt4. Angpt1 is well elucidated as a vascular protective molecule for vascular stability(1,2). Unlike Angpt1, Angpt2 is more versatile and dynamic functions as a vessel-destabilizing molecule(3). However, the role of the angiopoietin-Tie receptor system in cardiovascular disease is not well known, especially in myocardial damage. Some studies reported that Angpt1 and Angpt2 are involved in pathophysiology of cardiovascular diseases(4). Previous studies showed that plasma Angpt2, but not Angpt1, levels were higher in patients with ST-segment elevation myocardial infarction (STEMI)(5-7). In addition, research data demonstrated that excessive Angpt2 overexpression exacerbated myocardial fibrosis(8,9). However, Dallabrida et al. reported that Angpt2 also stimulated myocardial survival but is less efficiency than Angpt1(10). Thus, the effects of angiopoietin system and its mechanism is not well understood. Cardiac myocyte apoptosis and necrotic myocyte cell death are the results of myocardial ischaemia caused by imbalance of myocardial oxygen supply and demand. Recent study reported myocardial ischaemia-reperfusion induces disbalance of angiopoietins. Angpt1 was likely to protect myocardial ischaemia, while Angpt2 had mysterious effect on cardiac myocytes but the mechanism is still unclear.

There are currently limited data about the effects of angiopoietin and its mechanism on cardiomyocyte survival during ischaemia. The signaling pathways responsible for this phenomenon is needed to be explored. Therefore, this study aimed to examine the effects of Angpt1 and Angpt2 on rat embryonic ventricular myocardial cell line (H9c2) during myocardial ischaemia. The experiments are performed to test the hypothesis that Angpt1 would reduce myocardial damage after ischaemia as well as Angpt2 would aggravate or protect cardiomyocyte subjected to simulated ischaemia.

This research will help to understand the roles of Angpt1 and Angpt2 in myocardial ischaemia and extend the knowledge in development of selective angiopoietin inhibitor for blocking its interaction with their receptor.

The rat embryonic ventricular myocardial cell line or H9c2 (ATCC number CRL-1446) were cultured in complete medium; Dulbecco's modified Eagle's medium (DMEM) containing 1500 mg/L of NaHCO2 supplemented with 10% heat-inactivated foetal bovine serum (FBS) and 1% penicillin-streptomycin. Cells were incubated with 5% CO2 at 37 °C. Cells were subcultured for subsequent experiments when 80% confluence was reached. For cell toxicity analysis, cells were cultured and divided into 24-well plates at density of 50,000 cells/cm2. After 1 hour of serum deprivation, cells were ready for further experiments.

H9c2 cells at density of 50,000 cells/cm2 in 24-well plates were treated with various concentrations (400, 600 and 800 ng/mL) of Angpt1 and Angpt2 for 1 hour before simulated ischemia. Simulated ischaemia was induced by incubating the cells with a simulated ischaemic solution containing 140 mM NaCl, 6 mM KCl, 1 mM MgCl2, 1 mM CaCl2, 5mM HEPES, 10mM 2-deoxy-d-glucose, and 10 mM sodium dithionite(11). Cells cultured in complete medium was used as a control group.  Cells were exposed to simulated ischaemic solution at 37 °C in an atmosphere with 5% CO2 for 90 minutes.

In order to determine cell viability of cardiomyocyte with simulated ischaemic condition, MTT assay was performed. After 90 minutes of simulated ischaemia, the solution was removed and cells were washed once with phosphate buffer saline (PBS). MTT solution at the concentration of 0.5 mg/ml was added and incubated at 37 °C for 2 hours. After that, the supernatant was gently removed and dimethyl sulfoxide was used to solubilise the purple formazan crystals. The absorbance of the samples was measured using a microplate reader at the wavelength of 570 nm.

Effect of angiopoietins on cell viability:

Effect of the simulated ischaemia in different durations on cell viability:

H9c2 cells were subjected to simulated ischaemia with ischaemic solution. Cells were incubated with the ischaemic solution at various durations including 0, 30, 60, 90 and 120 minutes, and MTT assay was performed. Figure 2 shows that the number of cells treated at every duration were significantly lower than that of the control group. In addition, the number of cells treated at 90 and 120 minutes were significantly lower than those of the 30 and 60 minutes of simulated ischaemia. Therefore, the optimal simulated ischaemia duration of 90 minutes was selected for the subsequent experiment.

Effect of angiopoietins on H9c2 cell viability after simulated ischaemia:

H9C2 cells were pretreated with different concentrations (400, 600 and 800 ng/ml) of Angpt1 and Angpt2 for 1 hour. After 90 minutes of simulated ischaemia, MTT assay was performed. Figure 3 shows that the number of cells pretreated with 800 ng/mL of Angpt2 was significantly higher than that of the simulated ischaemic (sI) group, approximately a 20% increase. In addition, at 800 ng/mL of Angpt2 pretreatment, the cell viability was significantly higher than those of the Angpt1 groups. 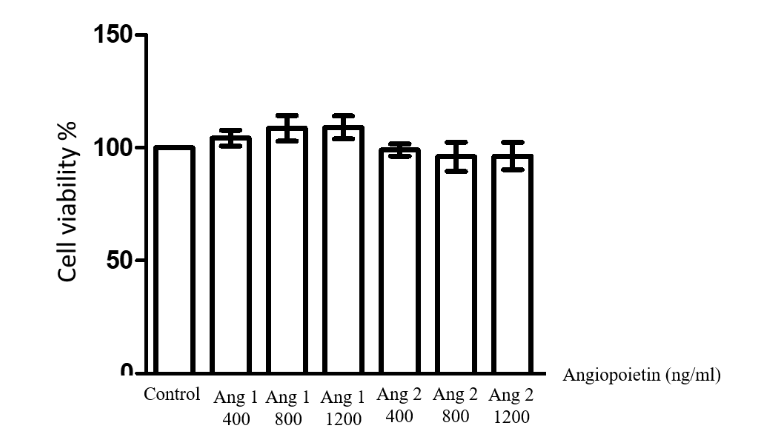 Figure 1 Determination of H9c2 cell viability after treatment with different concentrations of Angpt1 and Angp2 (400, 800 and 1,200 ng/mL). The results are expressed as mean ± standard error. Three experiments with independent cell preparations were performed. 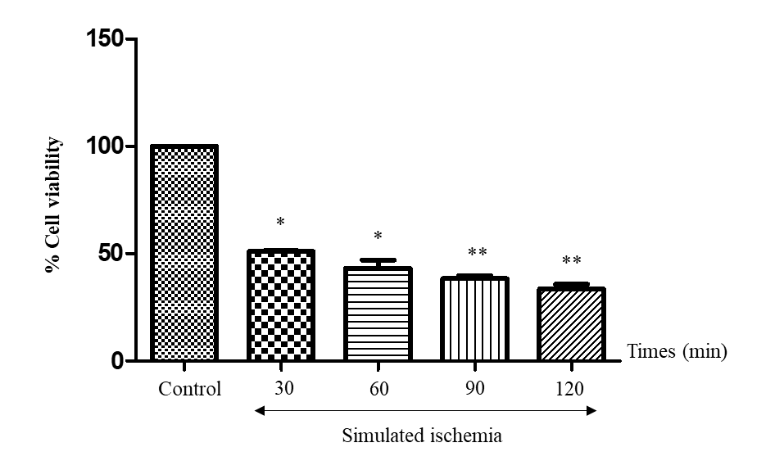 Figure 2 Determination of H9c2 cell viability after simulated ischemia at different durations (30, 60, 90 and 120 minutes). The results are expressed as mean ± standard error. Three experiments with independent cell preparations were performed. 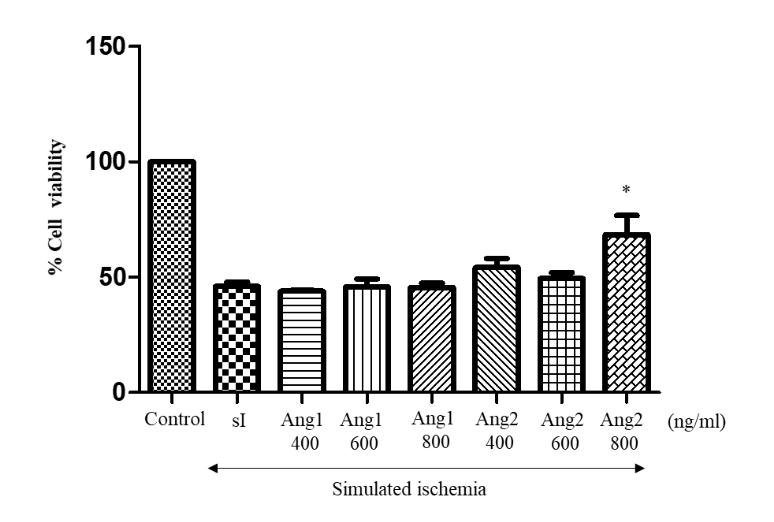 Figure 3 Effects of Angpt1 and Angpt2 on H9c2 cell viability. The results are expressed as mean ± standard error. Three experiments with independent cell preparations were performed.

The cardiac myocyte mass loss following myocardial ischaemic-reperfusion (I/R) injury remains the leading cause of morbidity and mortality worldwide. Therefore, molecules that can preserve myocyte viability are candidate therapeutic targets to limit myocardial I/R injury. The present study demonstrates that exogenous human recombinant Angpt2 could preserve cardiac myocyte viability in vitro model of simulated ischaemia. The results show that there is significant difference in cell death following simulated ischaemic injury between the untreated group and the cells treated with 800 ng/mL of Angpt2. The data indicates that Angpt2 could suppress simulated ischaemic solution-induced cell death, whereas Angpt1 had no protective effect in this model. Thus, this study reveals that 800 ng/mL of Angpt2 could reduce cardiomyocyte death following simulated ischaemia injury.

The result was consistent with the previous study which reported that 800 ng/mL of Angpt2 could be an apoptosis survival factor for endothelial cells by activation of the phosphatidylinositol 3′-kinase (PI3K)/Akt signal transduction pathway(12). It was also reported that 400 ng/mL of Angpt2 could enhance endothelial cell survival through pro-survival PI3K/Akt pathway(13) and also promote angiogenesis in vitro through the direct activation of Tie2 receptor signaling during prolong exposure or at high concentrations of Angpt2(14). Likewise, Sandhu et al. performed in vivo left coronary artery ligation in rat to induce myocardial ischaemia. They found an increase in Angpt2 and decrease in Angpt1 expression, whereas Tie2 expression remained unchanged(15).

These data indicated the elevation of Angpt2 responded to hypoxia or inflammatory in the ischaemic heart. In turn, Chen et al.(9) suggested that myocardial Tie2 expression was decreased during ischaemia and could be suppressed by high Angpt2 level which was relevant to the studies of Shyu et al.(1) showing the increased Angpt2 expression at the infarct size of rat myocardium. These evidences supported that Angpt2 also increased after ischaemia-reperfusion in the rat ventricular myocardium.  However, several studies reported that Angpt2 had a deleterious effect in myocardial I/R injury that predisposed to abnormal vascular remodeling, inflammation, cardiac hypoxia and infarction(8).

Our findings suggest that the physiological role of Angpt2 is more complex than previously recognised. Further studies should elucidate the molecular mechanism responsible for cardioprotective effect of Angpt2 on myocardial survival against ischaemic-reperfusion injury.

In conclusion, the present study demonstrates that human recombinant angiopoietin2 could protect cardiomyocytes against myocardial ischaemic injury in in vitro cytotoxicity model.