Background: Tuberculosis of the placenta is a rare condition which mainly occurs in the immunosuppressed individuals especially in acquired immune deficiency syndrome (AIDS) and hematologic malignancy9. Tuberculosis can spread to the fetus via hematogenous or cervicovaginal route and result in congenital tuberculosis.
Case report: We report a case of 25-year-old primigravida, who had stage IV diffuse large B-cell lymphoma of the gastric antrum. She presented with preterm premature rupture of membranes (PPROM) and developed acute respiratory distress syndrome (ARDS) of uncertain etiology after Caesarean section. She died 12 days following delivery of acute respiratory failure. Subsequent autopsy findings revealed diffuse organizing alveolar damage in the lung, with disseminated tuberculosis of the liver, spleen, peri-pancreatic lymph nodes and placenta. The infant delivered prematurely at 31 weeks gestation with 1685 gram birth weight. Despite extensive investigations showing negative results for TB culture, the infant was diagnosed as congenital tuberculosis and treated with anti-TB drugs. At one-year follow up, the infant was in good health and showed normal development.
Keywords: disseminated tuberculosis; diffuse large B-cell lymphoma; pregnancy; placental tuberculosis; congenital tuberculosis

Tuberculosis (TB) is one of the most important public health problems in Thailand. The prevalence of TB in Thailand is estimated at 142 per 100,000 population and ranked 62th in the world among the TB burden countries1. This high prevalence has been associated with human immunodeficiency virus (HIV) infection. Twenty percent of TB patients were HIV positive1,2, although other conditions causing immunosuppression were not documented in these studies1,2. Women of childbearing-age with HIV infection are at increased risk for genito-urinary system or placental tuberculosis, which may be transmitted to the fetus during pregnancy or delivery, resulting in congenital tuberculosis3.

A Thai 25-year-old primigravida, gestational age 31 weeks, who was a known case of stage IV diffuse large B-cell lymphoma of gastric antrum involving bone marrow, left lobe of liver and pancreas diagnosed at 21 weeks of gestation. She had completed 3 cycles of chemotherapy, the last of which was completed 18 days prior to admission. She had no prior symptom suggestive of tuberculosis.

In the last admission, she presented with three-day history of uterine contraction, bloody vaginal discharge and fever. Physical examination revealed a fever of 38.8°C, heart rate of 116/min, respiratory rate of 28/min and blood pressure of 110/70 mmHg. Breech presentation was detected with fetal heart rate of 156/min. An open cervical os and leakage of both membrane and clear yellow amniotic fluid was noted on vaginal examination. Preterm premature rupture of memebranes (PROM) was diagnosed with suspected chorioamnionitis due to maternal fever. During hospitalization in Ramathi-bodi hospital, antibiotics were administered and the day after admission the patient underwent Caesarean section (CS) due to PROM with maternal fever.

At CS a single vital female fetus was delivered, with a normal birth weight of 1,685 grams (expected range at 31 weeks = 1375±281 grams).4 APGAR scores at 1 and 5 minutes were 8 and 9, respectively. Intraoperatively the amniotic fluid was yellow, cloudy and had a foul odor. The placenta was sent for histological investigation. On gross examination, the intact placenta measured 13x11x2 cm with a trimmed weight of 270 grams. Fetal and maternal surface were grossly unremarkable (Fig. 1A). The cut surface was spongy, moist and brownish red. (Fig. 1B). Placental membranes were translucent white and glistening without specific lesion. The umbilical cord was 15.5 cm. in length and 1 cm. in cross-sectional diameter and showed no specific lesions, with three normal vessels.

Microscopic examination revealed tiny foci of microabscess in the intervillous spaces, compatible with focally acute intervillositis (Fig. 1C), and neutrophilic infiltratation at the rim of villi, compatible with acute villitis (Fig. 1D). No formed granulomas were seen. Numerous acid-fast bacilli were found in the intervillous microabscess (Fig. 1E). Despite lack of placental culture, polymerase chain reaction(PCR) from formalin fixed paraffin-embedded placental tissue confirmed the diagnosis of M. tuberculosis (Fig. 2A-B). GMS,    organisms (not shown). There was no evidence of PAS, Brown&Brenn stains were negative for chorioamnionitis and funisitis. 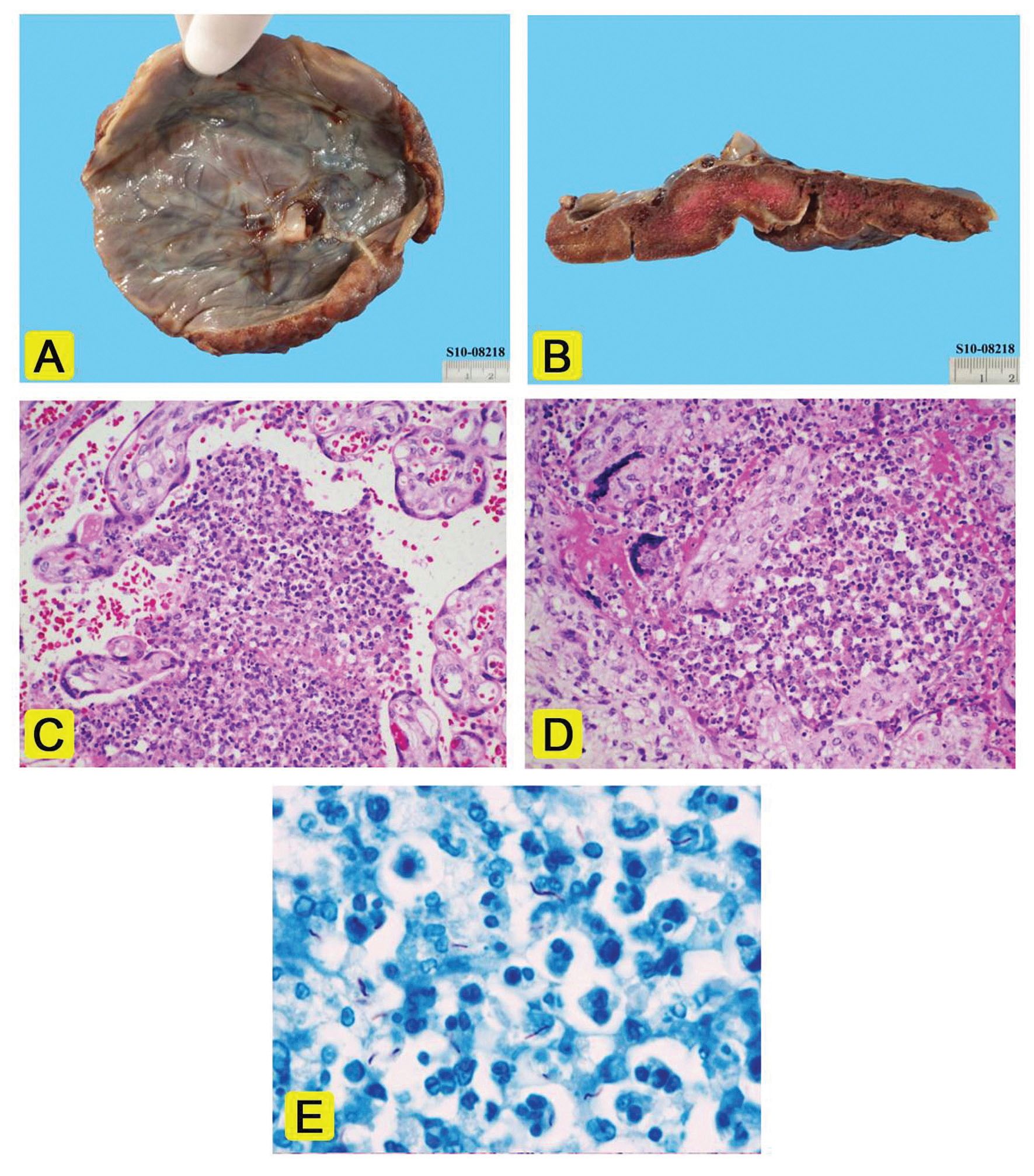 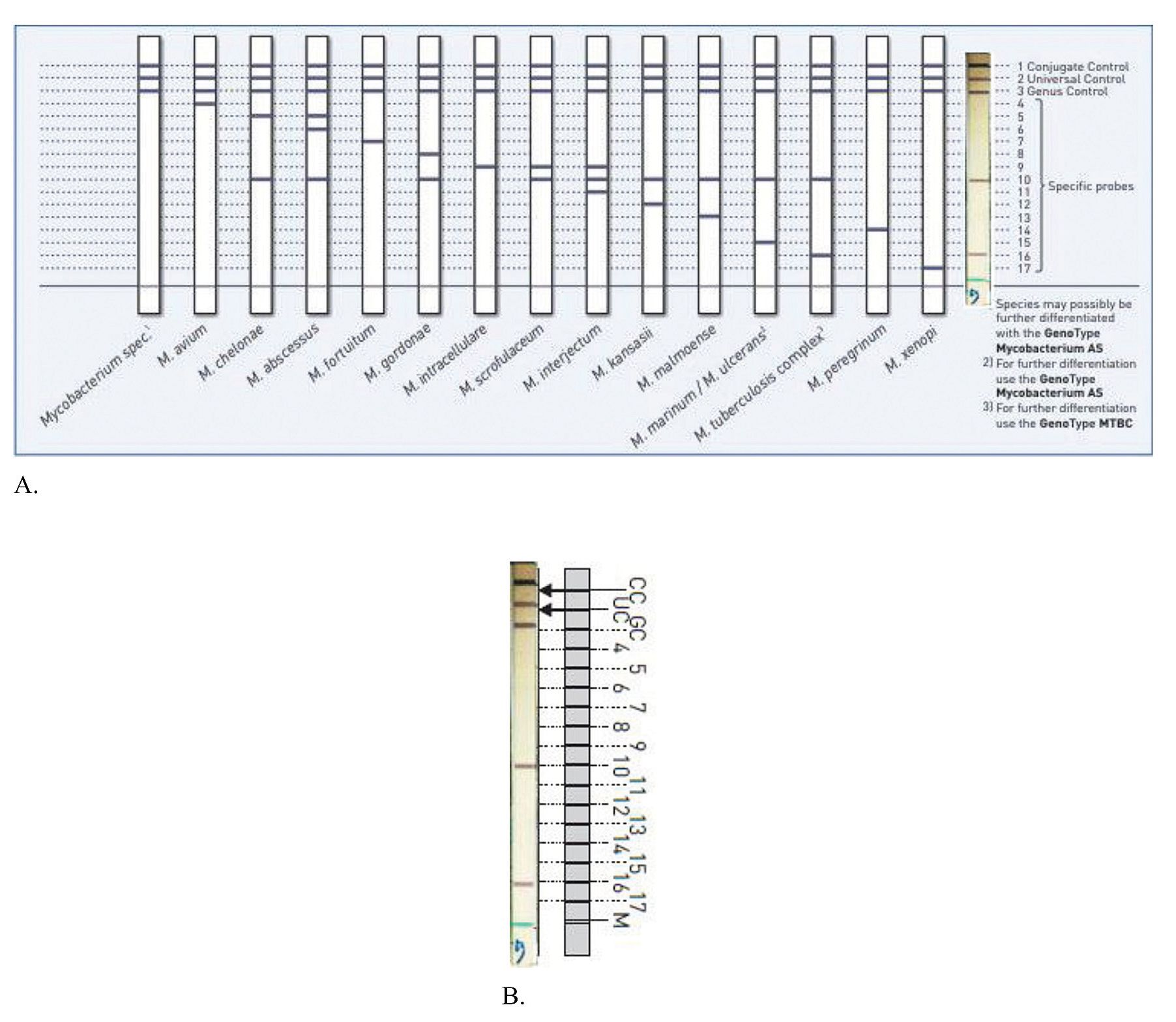 Figure 2 Polymerase chain reaction (PCR) forM. tuberculosis form paraffin-embedded placental tissue. The Genotype Mycobacterium CM (Hain Lifescience, Nehren, Germany) is a reverse hybridization line-probe assay, targeting the 23S rRNA gene region. This test is capable of identifying 15 mycobacterial species (2A). We performed the test directly on placental tissue. Although the test has been validated for use on cultured mycobacteria, it proved useful in this case in which the mycobacterial load in the tissue was high enough to retrieve a PCR product and the hybridization pattern was clearly identified as M. tuberculosis complex (2B).

Three days after cesarean section the mother developed fever with acute respiratory distress syndrome (ARDS). Possible etiologies included sepsis from chorioamnionitis, chemotherapy-induced interstitial pneumonitis and lymphomatous involvement. Laboratory investigation for H1N1 influenza virus, cytomegalovirus, bacteria, and fungi were all negative. Broad spectrum antibiotics were administered, but with no response in the clinical course. She developed spontaneous pneumothorax and pneumomediastinum from air leak syndrome due to severe diffuse alveolar damage on the 7th day of admission15. Intercostal chest drain insertion was done. Five days later she developed acute respiratory distress syndrome (ARDS) and finally expired due to respiratory failure. Postmortem examination to determine the definite cause of ARDS was performed. 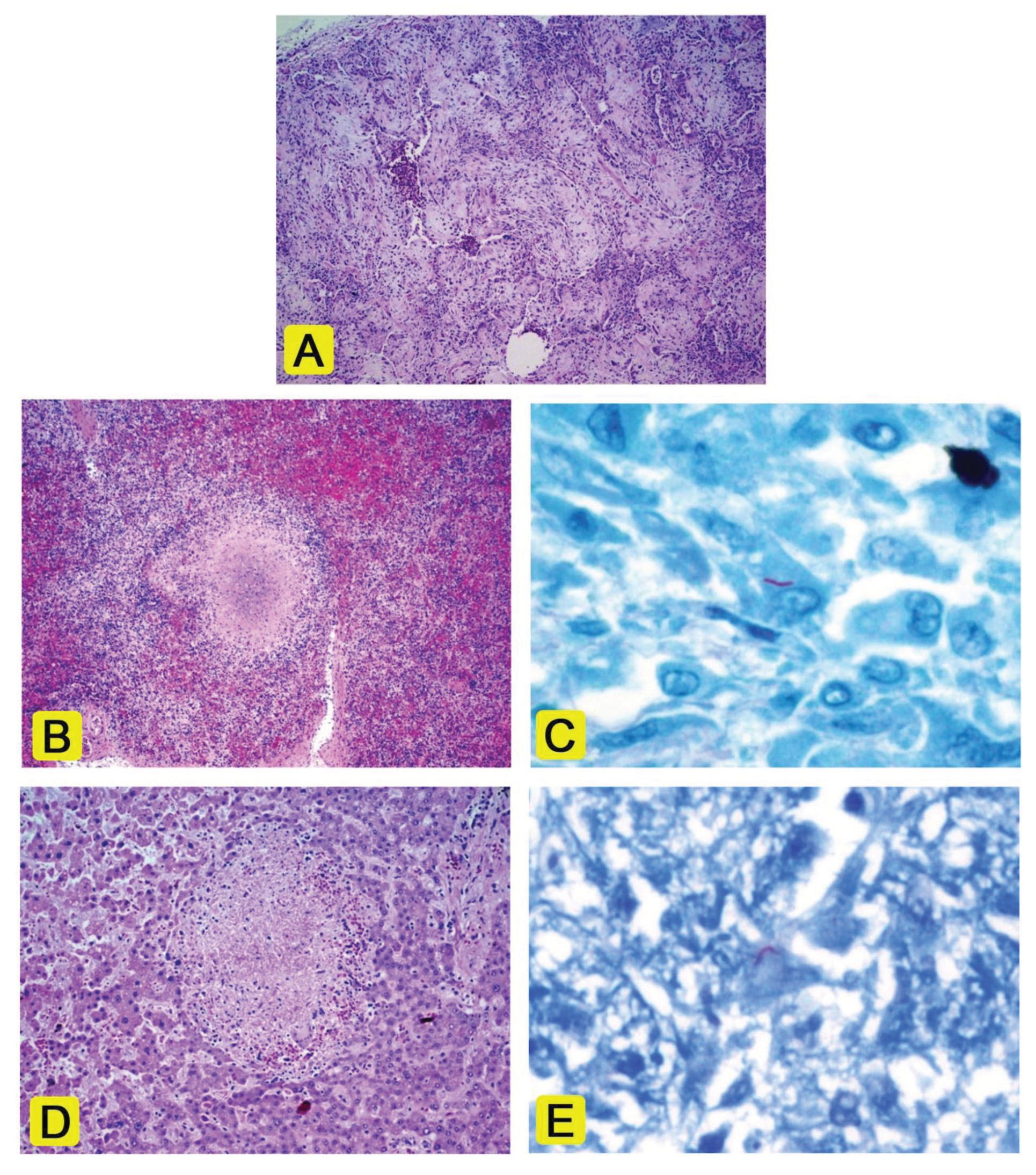 Autopsy findings revealed diffuse fibroblast plugging and intensive interstitial fibrosis with chronic inflammation, compatible with organizing stage of diffuse alveolar damage (Fig. 3A). Granulomas were not seen in the lung. Staining for acid-fast bacilli was negative (not shown). Polymerase chain reaction (PCR) for M. tuberculosis was negative. Lung tissue PCR for H1N1 virus and other common 17 viruses were negative. The cause of diffuse alveolar damage was assumed to be from chemotherapy-induced interstitial pneumonitis. Bilateral visceral pleural rupture with subpleural hemorrhage and adjacent microinfarction of distal lungs were noted (not shown), caused by high pressure of distal airway due to intensive fibroblast plugging as a result of severe diffuse alveolar damage. It was called “air leak syndrome” 15

The gastric antrum showed a 3-cm. submucosal mass of diffuse large B-cell lymphoma (not shown). Metastasis was present in left liver lobe and lymph nodes from peripancreatic soft tissue, paraaortic and perivesical soft tissue (not shown). Bone marrow involvement was not found, probably representing a response to chemotherapy. Post mortem revealed no granuloma in the bone marrow. Small caseous granulomas with acid-fast bacilli were found diffusely in the spleen (Fig. 3B, 3C) and rarely in the liver (Fig.3D, 3E). Two small caseous granulomas were found in the peripancreatic soft tissue lymph nodes with numerous acid-fast bacilli (not shown).

The neonate developed jaundice of prematurity. Due to the suspicion of chorioamnionitis, prolonged PROM, maternal fever and fetal tachycardia, she received antibiotic prophylaxis, but still developed neonatal sepsis. Intravenous followed by oral antibiotics were administered. Urine, blood and CSF cultures were negative. She was discharged at age 37 days. Notably, on the postnatal day 40, the neonatologist noticed the maternal autopsy results. Therefore congenital tuberculosis was suspected. Extensive investigations was performed from 49 days of age. Chest radiography was normal. AFB staining from a gastric aspirate was negative. Tuberculin skin test was not conducted since the patient had prior BCG (Bacillus Calmette-Guerin) vaccination, which might cause a false positive result13. Although the infant had no proven tuberculous lesions, and there were no definite criteria for diagnosing congenital tuberculosis, latent tuberculous infection was diagnosed as a result of intrauterine tuberculous exposure (see table 1) Antituberculous monotherpay (isoniazid) was started and continued for 9 months. Recently she experienced failure to thrive according to the head circumference and weight for age were between the 3rd to 10th percentiles. The most likely cause was inadequate feeding. Other organ systems appeared normal. Nutritional supplementation was started.

Placental tuberculosis is a rare condition. It was first reported for over a hundred year ago by Aldred et al since 1904, with subsequent studies by Boesaart (1959), Kaplan et al (1980) and Sarkar et al (1996). Most patients were immunosuppressed individuals such as those with hematological malignancy and more recently AIDS9. The placenta may be grossly normal or may contain firm, white plaques. Characteristic histopathological findings vary from caseating/non-caseating granulomas with or without giant cells, in the chorionic villi or intervillous space. Acute intervillositis may be present. Local villous destruction by granulomas may be seen. The decidua may show extensive necrosis, non-specific chronic deciduitis and granulomas in the placental floor, which suggested direct transmission from decidua to placenta. Acid-fast bacilli may be found in intervillous fibrin, villous stroma or fetal vessels.10, 11 In fetal infection, caseating granulomas in the lungs and acid-fast bacilli in the liver, spleen, and kidneys could be found 11. The present case showed a microabscess in the intervillous space with partial villous destruction. Placental TB was diagnosed due to presentation of numerous acid-fast bacilli in the intervillous microabscess (Fig 1C,1D,1E).

Interestingly, the findings lead to a concern of congenital tuberculosis of the infant, possibly transmitted via the hematogenous route during pregnancy. The revised diagnostic criteria for congenital tuberculosis by Cantwell, 1994 was applied (see table 1)7. Regardless of the lack of definitive diagnostic criteria including a lack of proven tuberculous lesions in the neonate, and no typical clinical manifestations of tuberculosis in the first weeks of life (such as lymphadenopathy, respiratory distress, hepatosplenomegaly, abdominal distension or abnormal chest radiography), congenital TB was suspected and treated due to the positive diagnosis of placental TB (criterion 3)14.

Congenital tuberculosis is a rare condition. Only 300 cases were reported since 1989 and additional 18 cases were reported from 2001 to December 2005 [3]. The modes of transmission are (i) intrauterine: hematogenous via the umbilical vein, aspiration or ingestion of infected amniotic fluid; (ii) intrapartum: aspiration of tuberculosis amniotic fluid or cervicovaginal secretions at birth; (iii) postpartum: breast feeding, inhalation or ingestion of infected respiratory droplets3, 56.

In Thailand, only 9 cases of congenital tuberculosis were reported by Tawee et al , 20038 and 1 case by Chulapong et al, 20042. None of these reports state placental examination.

Disseminated mycobacterial infection is typically associated with defective cellular immunity such as AIDS and lymphoreticular malignancies, usually when the CD4+ count is <50 pL. In such patients, macrophages are unable to kill the intracellular mycobacteria since they lack of CD4+ T-cells to secrete IFN-gamma and TNF- a. These cytokines are necessary for macrophage activation to against mycobacteria. The relatively impaired cell-mediated immunity in the pregnancy state also leads to susceptibility of tuberculosis12.

Tuberculosis of the placenta is a rare condition which is usually associated with AIDS and hematological malignancy. Fetal transmission usually occurs via hematogenous route and results in congenital tuberculosis. However, it is difficult to diagnose as the mother may have minimal symptoms and the infant show nonspecific symptoms3. If congenital tuberculosis is suspected, full investigation should be considered including chest radiography, tuberculin skin test, AFB staining from gastric aspiration, and, if indicated, biopsy of lymph node and liver, CSF culture or polymerase chain reaction (PCR) for tuberculosis are required3,5, 7 8 13. This case demonstrates tuberculosis of the placenta in the immunocompromised patient due to malignant lymphoma and subsequent chemotherapy shortly before delivery. Congenital tuberculosis was diagnosed on the basis of placental tuberculosis, although the infant lacked signs or a positive laboratory diagnosis of tuberculous infection. The infant subsequently showed good health and normal development after antituberculous prophylaxis.

The authors would like to thank: Wasana Kanoksilp, M.D., instructor of Anatomical Pathology from Department of Pathology Faculty of Medicine, Ramathibodi Hospital,, Mahidol University, Bangkok, Thailand for autopsy consultation; Mr. Thanwa Wongsuk, a medical technologist from the same Institute for performing PCR; and the 1st base sequencing Int., Malaysia for the support of PCR process.

6.    Elizabeth Whittaker, Beate Kampmann. Perinatal tuberculosis: new challenges in the diagnosis and treatment of tuberculosis in infants and the newborn. Early Human Development 2008: 84; 795-799.