Acute myocardial infarction in young patients with non-obstructive coronary arteries is rare and has been rarely reported in the literature. We report herein a case of an obese young man presented to the emergency department with typical chest pain, ischaemic ECG changes, and elevated cardiac troponin T concentrations, in whom coronary angiogram revealed nearly normal coronary arteries. The cause of increased troponin in this patient is not known but may involve microvascular spasm, possibly mediated through endothelial dysfunction frequently encountered in obese patients. Since these patients have been reported to be at high risk of future coronary events, the treatment of obesity and its associated coronary artery disease risk factors should be intensified and an adoption of a healthy lifestyle should be initiated as early as possible.

In the past decades, measurements of cardiac troponin concentration have been proved to be reliable methods for diagnosis of acute myocardial infarction (AMI) and for prognostication in acute coronary syndrome (ACS) patients. The introduction of sophisticated immunoassays in recent years has led to troponin testings with improved analytical performances that fulfill the guidelines recommended by the international cardiology societies(1). According to these guidelines, the diagnosis of an AMI can be made by the presence of elevated cardiac troponins and typical symptoms or electrocardiographic changes consistent with myocardial ischaemia in patients with (type 1 AMI) and without obstructive coronary artery (type 2 AMI), as well as in those underwent percutaneous (type 4 AMI) or surgical revascularization procedures (type 5 AMI). In this context, it should be noted that although AMI may represent a frequent cause of increased cardiac troponins, this can be seen in several other conditions in chest pain patients including myopericarditis, pulmonary embolism, aortic dissection and stress cardiomyopathy. Thus, cardiac troponins are specific markers of myocardial cell damage but are non-specific with respect to the aetiologies of their elevations(2).

The present study reports a case of a young male patient with obesity presenting with typical chest pain and elevated cardiac troponin T (cTnT), in whom cardiac catheterization has revealed a non-obstructive coronary angiogram. The possible causes and mechanisms of increased cardiac biomarkers in this patient will also be described and discussed.

A 48-year-old man came to the emergency department with a complaint of retrosternal chest pain of around 5 minutes of duration which occurred during walking. The chest discomfort was accompanied by diaphoresis and dizziness, but he denied any shortness of breath, nausea or vomiting. Similar symptoms have repeatedly occurred in the past 2 days. There was no family history of coronary heart disease but a history of taking lipid-lowering and antihypertensive medications in the past 6 months. His body mass index (BMI) and waist circumference, determined prior to the medical treatment, were 31.49 and 100 cm, respectively. At this time point, his blood pressure was slightly elevated at 147/86 mmHg.

The electrocardiogram showed sinus rhythm, with a heart rate of 93 beat per minute, as well as abnormal Q wave in the leads II, III and aVR, and flattened T wave in the anterolateral leads. The echocardiographic assessment has revealed no wall motion abnormality, with left ventricular ejection fraction of 72%. Cardiac troponin T, determined with a high-sensitivity assay (Roche Diagnostics) on the Cobas 602 analyzer, was 501 ng/L (99th percentile reference limit of 14 ng/L). Based on these results and in accordance with the 2015 ESC guidelines(3), it was decided to proceed to invasive procedure with cardiac catheterization which has revealed a non-obstructive coronary angiogram (Figure). Accordingly, a diagnosis of myocardial infarction with non-obstructive coronary arteries (MINOCA) was made. Troponin measurements on the next days (Table) have shown a falling pattern, thus confirming the diagnosis of an AMI. Determination of N-terminal probrain natriuretic peptide (NT-proBNP) (Roche Diagnostics) has shown an increased concentration of 1451 ng/L (cut-off level for the age of < 50 years is 450 ng/L). D-dimer (BioMerieux SA) level was 293 ug/L (normal < 500 µg/L). 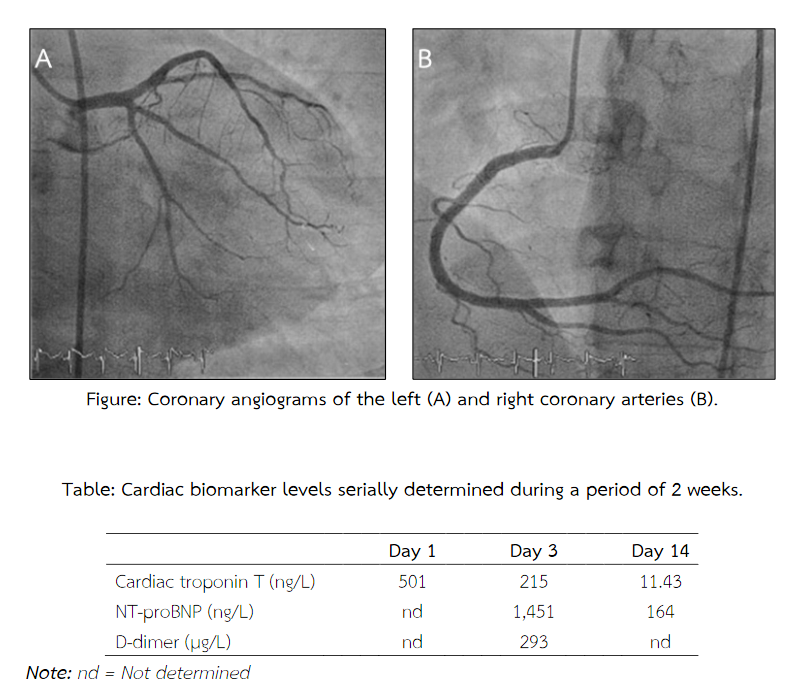 The treatment with lipid-lowering and anti-hypertensive medications was continued and intensified, and aspirin was added. He was recommended to adopting a healthy lifestyle, which consists mainly of a healthy diet and regular physical activity. Six months after discharge from the hospital, the patient has achieved a significant weight reduction and was free of any cardiac symptoms.

AMI in young people, defined as the age of less than 45 years, is not uncommon and has been reported to occur in 6.8% of all AMI cases registered in a Spanish epidemiological study(4). In a study by Gupta et al., AMI hospitalisation rates, determined between 2001 and 2010, did not decline for young women and men aged 30 to 54 years which were in contrast to those obtained from older people. The absolute number of discharges for AMI among women even increased, thus indicating the importance of considering AMI with non-obstructive coronary arteries in the young patient group(5).

The young AMI patients have been reported to have a rising trend in the prevalence of cardiovascular risk factors, especially hypertension and diabetes mellitus(5). However, it has been shown that AMI patients with normal coronary arteries exhibited a lower BMI, a similar systolic blood pressure and a favourable lipid profile as compared to the patients with coronary heart disease (CHD)(6). Since our patients has received lipid-lowering and anti-hypertensive medications for a long time, it is not possible to determine the prior extent and severity of these risk factors. Nevertheless, he had a BMI of > 30 and a history of sedentary lifestyle which currently are accepted as important CHD risk factors.

At present, measurements of cardiac troponins have become the preferred biochemical methods for the diagnosis of AMI, thereby replacing CK-MB measurements. The advent of high-sensitivity immunoassays with improved analytical sensitivity has allowed for increased clinical sensitivity for the early detection of myocardial infarction. This was, however, associated with reduced clinical specificity(2). In the case of our patient, several causes of increased cardiac troponins in chest pain patients with non-obstructive coronary arteries are to be considered. The first is viral myopericarditis, especially those that occur in young persons. However, although laboratory investigations of viral infection were not performed in our patient, he was free of recent febrile illness and the ECG findings of the presence of Q waves and flattened T waves are not typical of the disease which usually shows a widespread ST-T segment elevation(7). Pulmonary embolism as another possible cause of elevated cardiac troponin can be ruled out by the absence of risk factor such as the deep venous thrombosis and a negative D-dimer test(8). Stress (takotsubo) cardiomyopathy is a recently described acute chest pain syndrome that is associated with release of cardiac troponin in a rising and falling pattern, ischaemic ECG changes, and a non-obstructive coronary angiogram. Nonetheless, this syndrome can also be ruled out by the absence of a history of physical or emotional stress, male sex, and by the absence of apical and midventricular akinesia and preserved contraction of the basal segment on echocardiogram(9). Other causes of MINOCA include coronary artery anomalies or dissection(10).

In our opinion, the most likely cause of increased troponin T in our patient can either be the epicardial coronary artery spasm or coronary microvascular constriction or spam. The former, however, is not likely the cause since it is usually associated with angina at rest and a transient ST segment elevation on the ECG(11-12). Coronary microvascular spasm, on the other hand, is characterised by ST-segment changes during spontaneous or provoked angina, in the presence of normal or slightly diseased coronary arteries. The condition has been described to occur in about 25% of patients with chest pain and non-obstructive coronary artery disease (NOCAD)(13). Nevertheless, the limitation of the present study is that we have not performed the acetylcholine test which can reliably and safely be used to distinguish the two entities from each other(14).

The potential pathophysiological mechanisms of the disease mainly include an impairment of endothelium-dependent vasodilatation due to reduced nitric oxide production and release, as well as enhanced vasoconstrictor activity owing to abnormalities in cardiac adrenergic innervation, both of which result in coronary microvascular spasm and reduced microvascular blood flow(13,15). In this context, it is important to note that in all the clinical conditions mentioned above, cardiac troponins may show a rising and/or falling pattern mimicking an AMI. In addition, the troponin increases in these patients are usually of similar magnitude as compared to those in non-ST-segment elevation myocardial infarction (NSTEMI) and thus, cannot be used to distinguish the one from another. Nevertheless, troponin levels may have some prognostic significance that should be determined in future investigations.

AMI with non-obstructive or normal coronary arteries is not uncommon and can be found in relatively young patients with a relatively high prevalence of cardiovascular risk factors. Since these patients have been shown to be at high risk of subsequent coronary events during a long-term follow-up(16), they should be followed closely and the search for the cause of troponin elevation should be comprehensive. In addition, the treatment of coronary artery disease (CAD) risk factors should be intensified and adoption of a healthy lifestyle should be initiated as early as possible.