Background: Pentalogy of Cantrell is a rare congenital syndrome characterized by defects involving the supra-umbilical abdominal wall, lower sternum, anterior diaphragm, pericardium, and the intra-cardiac anomalies. The ensuing congenital heart disease is a source of major morbidity. The full spectrum of the syndrome is rare while incomplete expression of the syndrome and its variants are well-recognized.
Case presentation: A 6-day-old male neonate with an incomplete form of Cantrell pentad was reported. At 22 weeks’ gestation, prenatal sonography indicated omphalocele and ventricular septal defect (VSD) with a double outlet right ventricle (DORV). The patient was referred to Khon Kaen University Hospital (Srinagarind Hospital) in Northeast Thailand. Amniocentesis revealed 46,XY. He was bom full-term by normal delivery. His congenital defects were confirmed; however, he died 2 days after surgical correction of the abdominal wall and diaphragm defects. The distinct findings relevant to pentad were noted.
Keywords: Incomplete pentalogy of Cantrell, diaphragmatic hernia, double outlet right ventricle, omphalocele

Pentalogy of Cantrell is a rare disease, with multiple congenital thoraco-abdominal malformations (1) a midline supraumbilical abdominal wall defect; (2) a defect of the lower sternum; (3) a defect of the diaphrag-matic pericardium; (4) a deficiency of the anterior diaphragm, and (5) congenital cardiac anomalies1.

It was first described by Cantrell et al. in 19581. The incidence of the syndrome is about 1 in 65,000 live births2. The condition is believed to be caused by a failure in development of the lateral mesoderm; which occurs when the embryo is about 14-18 days old, when the splanchnic and somatic mesoderm is dividing and developing1. The failure of the lateral mesodermal folds to the midline resulting in sternal and abdominal defects while failure of the septum transversum to develop causes defects in the anterior diaphragm and peri-cardium as well as abnormal development of the myocardium from the splanchnic mesoderm1. Organs may eviscerate through the resulting sternal and abdominal wall defects (Figure 1), making prenatal diagnosis of the syndrome feasible by ultrasonography. The full spectrum of pentalogy is a rare occurrence while the incomplete expression of the syndrome; the combinations of two or three organ defects included in the pentad with either intracardiac and abdominal wall defects or a sternal abnormality3, and its variants are well-recognized3-4’5. Pathogenesis trisomy 13, and 18 has not been fully elucidated. It occurs sporadically, but has also been recorded in twins6,7 and in patients with trisomies 13, 18 and Turner syndrome89. Herein we report an incomplete form of the syndrome in a neonate. The distinct findings relevant to pentad—including the congenital heart anomalies similar to TOF—are highlighted.

A male, full-term infant was born by normal delivery to a 25-year-old woman (gravida 2, para 1). The child was the second for the parents; the first gravida was aborted for an unknown cause at 15 weeks’ gestation. The mother denied any exposure to known teratogenic agents. The parents were not consanguineous. The infant underwent prenatal sonography at 22 weeks: the diagnosis was omphalocele and intracardiac anormalies (VSD with DORV), so was transferred in his last trimester to Srinagarind Hospital for antenatal care. The pregnancy proceeded to term even after amniocentesis revealed the 46,XY karyotype. At birth, the infant had central cyanosis and an abdominal wall defect with omphalocele (5 cm), containing a partial extra-corporeal liver (Figure 1A). The abnormal 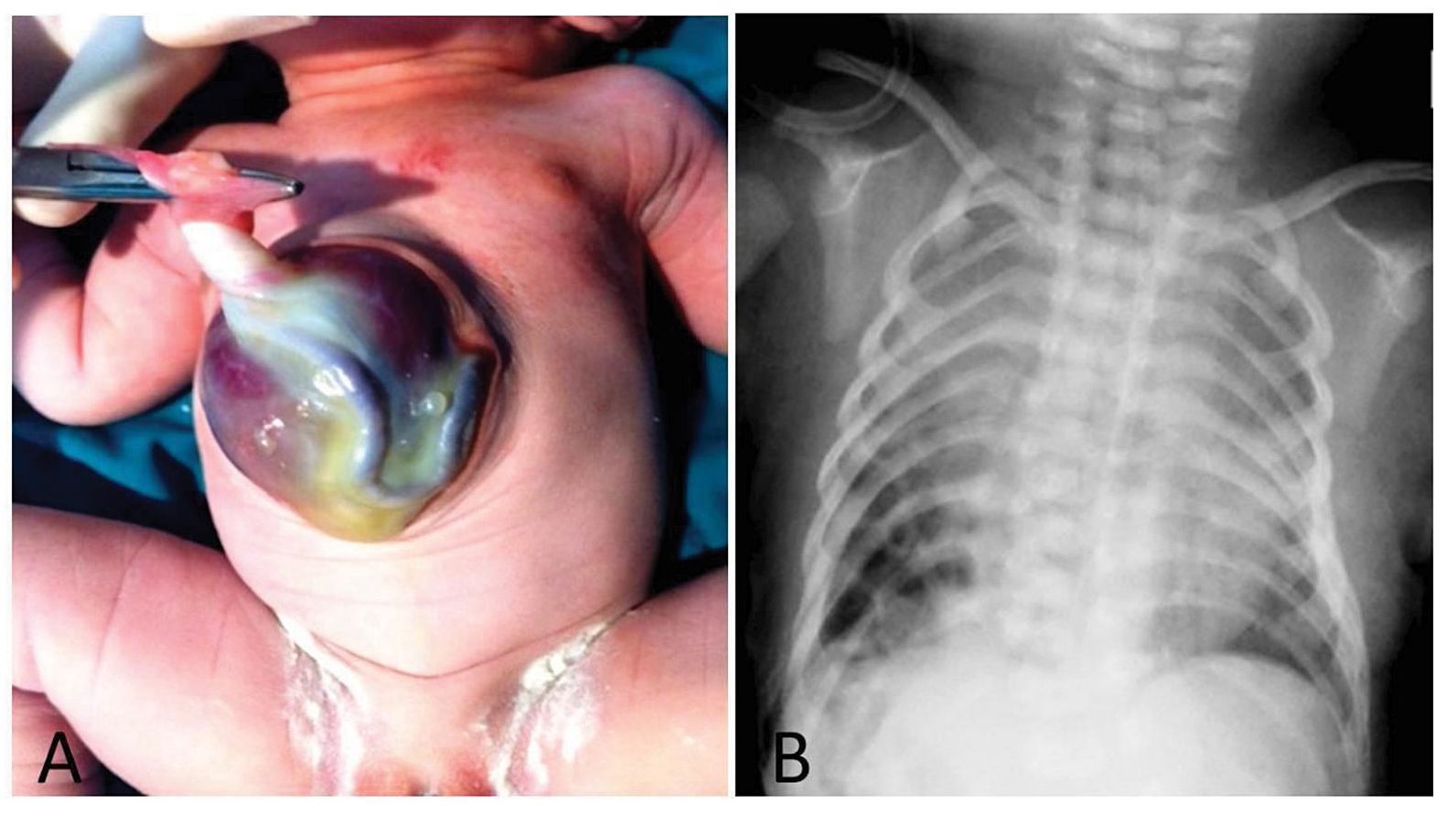 Figure 1 Infant with incomplete form of pentalogy of Cantrell: (A) supraumbilical abdominal wall defect— an omphalocele, containing extracorporeal liver with an umbilical cord insertion at the sac near the upper margin of the defect; (B) diaphragmatic defect—plain film of chest showing bowel gas pattern at lower right lung field with displacement of cardiac shadow heart sound was a SEM grade II at LLPSB. A chest X-ray revealed bowel gas at the right lung field (Figure 1B) and ultrasound demonstrated a small defect at the anterior part of the diaphragm. Echocardiography suggested tetralogy of Fallot (TOF) anomalies and the differential diagnoses included DORV with VSD. The infant underwent surgery to repair the diaphragmatic hernia and close the omphalocele. The patient died two days after surgery.

We described a neonate with a normal karyotype, diagnosed before birth as an incomplete pentalogy of Cantrell with complex intracardiac defects. The infant died on the sixth postnatal day, 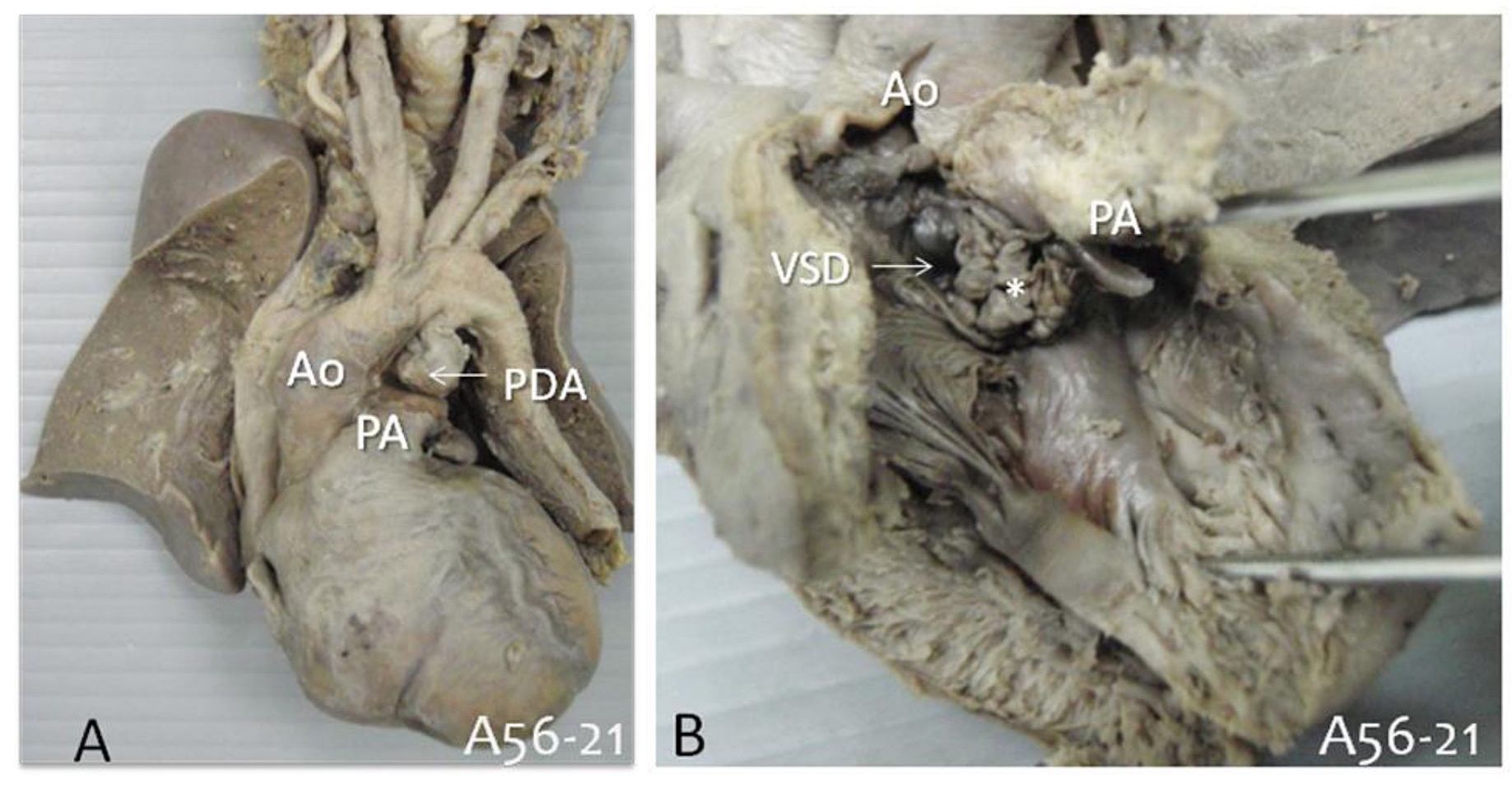 2 days after surgical intervention to repair the abdominal wall, and diaphragm defects. The pathological findings confirmed the diagnosis, as we found evidences of abdominal wall and diaphragmatic defects and intracardiac anomalies (TOF-type DORV). A literature review of patients with pentalogy of Cantrell (33 cases with complete form and 23 cases incomplete form), the following types of congenital heart disease were noted: VSD (12/33 and 8/23 cases); ASD (7/23 and 5/23 cases) and TOF (6/33 and 3/23 cases), DORV (0/33 and 3/33 cases10. Among these 56 patients various other associated anomalies were reported, including: (a) craniofacial and central nervous system anomalies (cleft lip and/or palate, encephalocele, and hydro cephalus) in 13/56 cases; and, (b) limb defects (clubfoot, absence of tibia or radius, and hypodactyly) in 10/56 cases10. Associated intrabadominal anomaly is uncommon and found in only 1/56 cases (agenesis of the gall bladder, and polysplenia10. This report supports the proposal by Carmi and Boughman[5] that pentalogy of Cantrell should be included among the defects of the ventral midline developmental field rather than abnormal segmental development, as previously suggested by Cantrell1. Prenatal detection of an omphalocele, associated with multiple midline defects, should alert the practitioner to the possibility of pentalogy of Cantrell and also OEIS complex11. The OEIS complex is characterized by a combination of omphalocele, exstrophy of the bladder, an imperforate anus, and spinal defects. Cytogenetic analysis is necessary at the time of prenatal diagnosis of pentalogy of Cantrell. Families tend to terminate affected pregnancies because of the intracardiac defects associated with this syndrome, which can reduce post-natal and post-surgical survival11,12. Nevertheless, successful two-stage repair of the TOF (associated with pentalogy of Cantrell) has been reported13, and one-stage repair of pentalogy of Cantrell is technically feasible14. Some children with mild thoraco-abdominal abnormalities have survived into adulthood15. The information of chromosome analysis is useful in family counseling and can influence perinatal management of affected fetuses. Importantly, pentalogy of Cantrell has a negligible recurrence risk16.

The authors thank (a) the family for permission to describe/share this case, (b) the Department of Pathology and the Faculty of Medicine for support, and (c) Mr. Bryan Roderick Hamman for assistance with the English.