Rhinosporidiosis of maxillary sinus: an unusual site – a case report

Conflict of interest: The author declares that he/she has no conflicts of interest with the contents of this article.

Rhinosporidiosis is a rare and chronic infestation caused by fungus Rhinosporidium seeberi, seen in India and Sri Lanka and is hyperendemic in southern parts of Tamil Nadu. It predominantly affects mucus membrane of nose and nasopharynx causing polypoidal growth(1). We report of a case of Rhinosporidiosis presenting as nasal polyp and affecting maxillary sinus. Caldwell-Luc operation was performed.

A 32-year-old female patient came to the outpatient department of Otorhinolaryngology with complaint of nasal obstruction since 1 year. She has recurrent episodes of nasal blockage and rhinorrhoea since 1 year. There was no history of otalgia, epistaxis or no other contributing medical history. Anterior rhinoscopy revealed pinkish polypoidal yet friable looking mass filling right nasal cavity. Nasal mucosa was swollen, congested with non-pulsatile, non-expansile polyp like mass with it. X-ray examination of the paranasal sinuses showed haziness of maxillary sinus on right side with soft tissue mass in right nasal cavity. A differential diagnosis of polyp, cholesteatoma, fungal infection of maxillary sinus was put forward. Caldwell-Luc operation was performed and parts of polypoidal growth, affected mucosa and cheesy looking material was removed and all of these tissues were sent for histopathology. 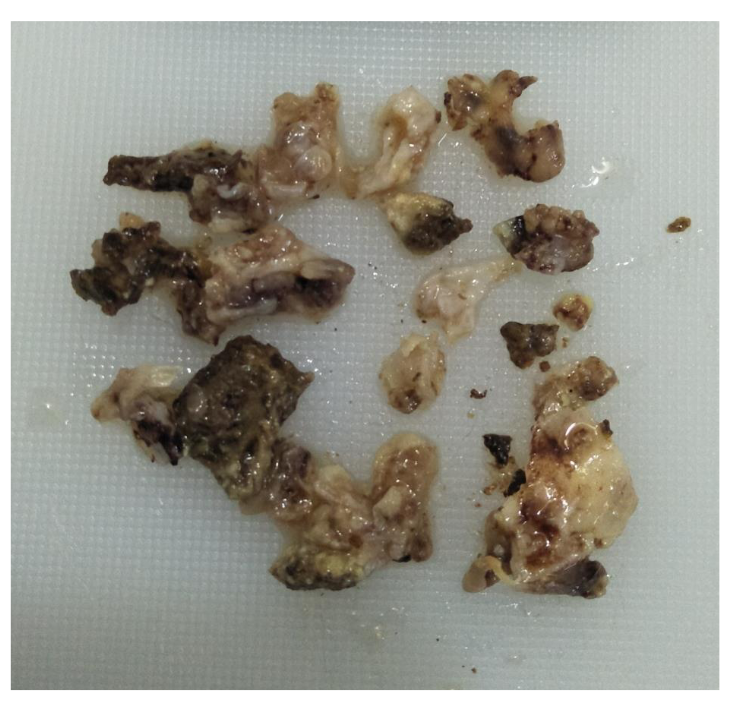 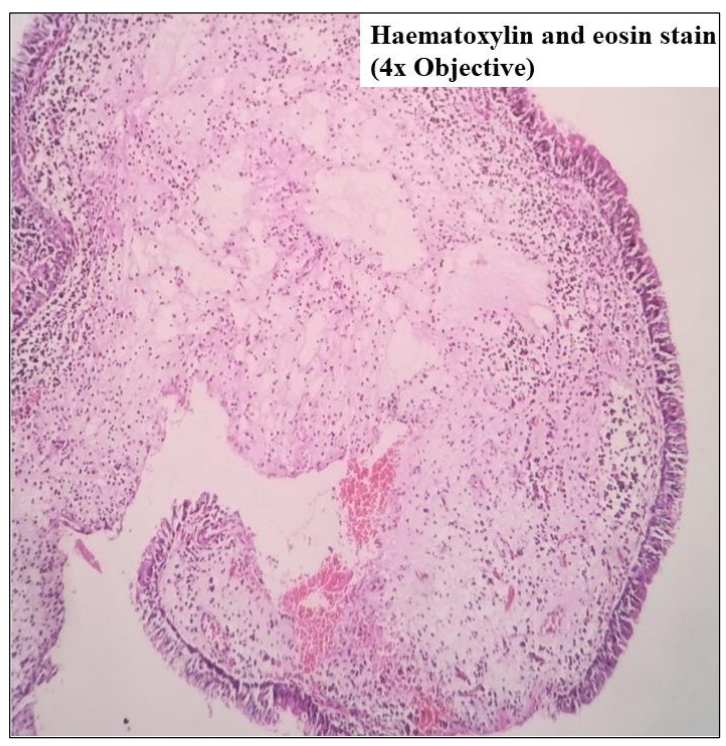 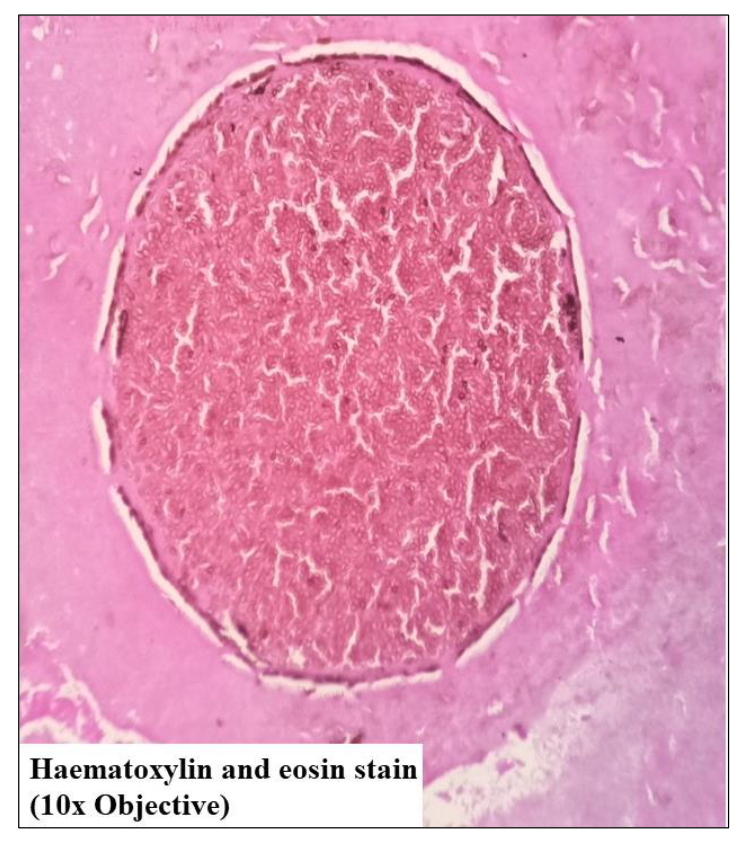 Figure 3 Large thick-walled sporangium with numerous endospores within it. 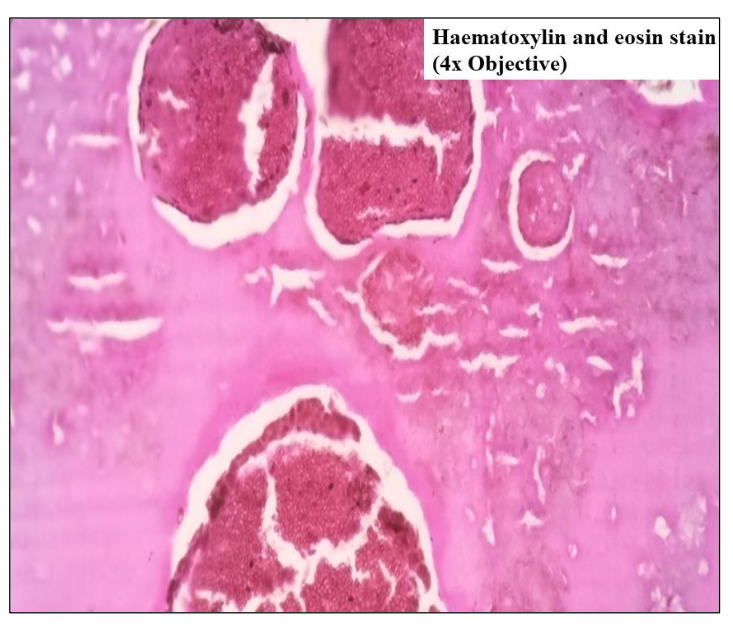 Rhinosporidiosis is a chronic infectious granulomatous disease of the upper respiratory tract characterised by the formation of polypoid masses(2). It affects all ages but is most common in the third and fourth decades. The most common sites are nasal mucosa, nasopharynx, oropharynx and nasolacrimal duct. The most common symptoms are nasal obstruction, epistaxis, and rhinorrhoea. Other sites of involvement may include the larynx, tracheobronchial tree, oesophagus, conjunctiva and ears.

Habitual bathing in rivers and ponds has been strongly associated with rhinosporidiosis(3). Water and soil are believed to be the reservoir of infection, given the increased incidence of disease found in sand workers, paddy cultivators, and people bathing in stagnant muddy waters.  Mode of transmission is through water or dust, from which the endospores penetrate the nasal mucosa, mature into sporangium within the submucosal compartment, and after maturation burst with release of sporangia into surrounding tissue.

The biological agent has a mature stage that consists of large, thick-walled spherical structures (called sporangia) containing smaller "daughter cells (called sporangiospores or endospores)"(4). Sporangia containing innumerable endospores seen with haematoxylin and eosin stain; organisms also stain with periodic acid–Schiff, mucicarmine and Gomori methenamine silver stains(2,4). Since it is primarily a disease affecting the orofacial region, it is of great value to the oral physician, oral radiologist and oral surgeon, and a necessary differential to be kept in mind for sinonasal masses. As all attempt to cultivate the causative organism in vitro has been unsuccessful, the diagnosis depends on clinical and histopathological findings(2,5).

Surgical excision is the mainstay of treatment. It has been advocated that a wide surgical margin is necessary to reduce the risk of recurrence, though this may be associated with significant morbidity like haemorrhage and nasal septal perforation. Because of this, limited surgical excision with cautery of the base of the lesion has been attempted, and to further reduce the risk of recurrence(4).

Systemic dapsone therapy is used as an adjunct to surgical intervention and helps in preventing recurrences in immunocompetent patients and is known to prevent recurrence by arresting the maturation of sporangia and promoting fibrosis in adjacent tissues(4).

The rhinosporidiosis must be taken as a differential diagnosis of the nasal polypoid lesions or sinonasal mass. The intranasal lesions must always be evaluated with details, by making a critical anamnesis and always considering the patient's origin. Histopathological examination is necessary to find out aetiological factor(6).