Neuroendocrine Tumor of the Gallbladder with Hepatic Metastases: A Case Report

Case presentation: A 68-year-old woman presented with hepatic metastasis. She had been performed cholecystectomy at a provincial hospital for symptomatic gallstones and was diagnosed as poorly differentiated adenocarcinoma of the gallbladder. The follow-up hepatic segmentectomy revealed a malignant small round tumor composed of nests of cells containing small nuclei with fine granular chromatin and inconspicuous nucleoli. The tumor cells were immunoreactive for chromogranin A. Metastatic small cell carcinoma was diagnosed. The gallbladder lesion was reviewed and the diagnosis was revised to neuroendocrine carcinoma (NEC), small cell type.

Conclusion: Neuroendocrine tumors/NEC of the gallbladder are uncommon and clinically and surgically indistinguishable from carcinoma of the gallbladder. Patients usually present with the common gallbladder symptomatology. This tumor has a bad prognosis and it is essential that the correct diagnosis be made on radiographic and histopathological grounds with immunohistochemical confirmation.

Neuroendocrine tumors (NETs), by definition, are epithelial neoplasms with predominant neuroendocrine differentiation.1 The tumors arise from enterochromaffin cells which are distributed throughout the body. The two major sites of predilection are the gastrointestinal system (64.3%) and the bronchopulmonary tract.2 According to the WHO Classification of Tumours of the Digestive System 2010, such neoplasms are classified into NETs G1 (carcinoid) and G2, and neuroendocrine carcinoma (NEC), large cell and small cell types, depending on mitotic counts and Ki-67 index. 3 4

The primary site of origin, histological pattern, tumor size, lymphovascular space invasion, growth pattern, and hormone production are important parameters for the determination of prognosis and the prediction of survival rates of NETs.5

According to the Surveillance, Epider-miology and End Result (SSER) program of the United States National Cancer Institute, only 278 cases of gallbladder NETs have been reported from 1973 to 2005, representing 0.5% of all NETs (0.2% of gallbladder cancers). This study reported that gallbladder NETs showed the same clinical and surgical findings as carcinoma and the prognosis was poor.6- 7 The five year survival rate for carcinoid/NEC was 36.9% whereas the small cell cancer variant showed 0% survival rate7

We describe a case of gallbladder NET in a 68-year-old female patient with hepatic metastasis.

A 68-year-old woman was referred from a provincial hospital for a single liver metastasis. She had undergone laparoscopic cholecystectomy for gallstone. The operation turned into an open cholecystectomy due to severe adhesions around the gallbladder. The histopathological diagnosis was a poorly differentiated adenocarcinoma. Physical examination at our hospital showed a healed surgical scar at the right upper quadrant and soft abdomen. Complete blood counts revealed no anemia but leukocytosis with neutrophilic predominance. Liver function tests showed mild increase in AST and ALT with negative viral hepatitis profiles. Tumor markers, including carcinoembryonic antigen and CA19-9, were normal.

Abdominal computed tomographic (CT) scan (Fig. 1) showed heterogeneous enhancing masses measuring 3.0 x 3.1 cm and 2.0 x 2.6 cm in axial diameter in hepatic segments 4a and 5; which are likely to be metastatic lesions. Many enlarged lymph nodes in the portocaval and right-sided gastrocolic regions were involved. 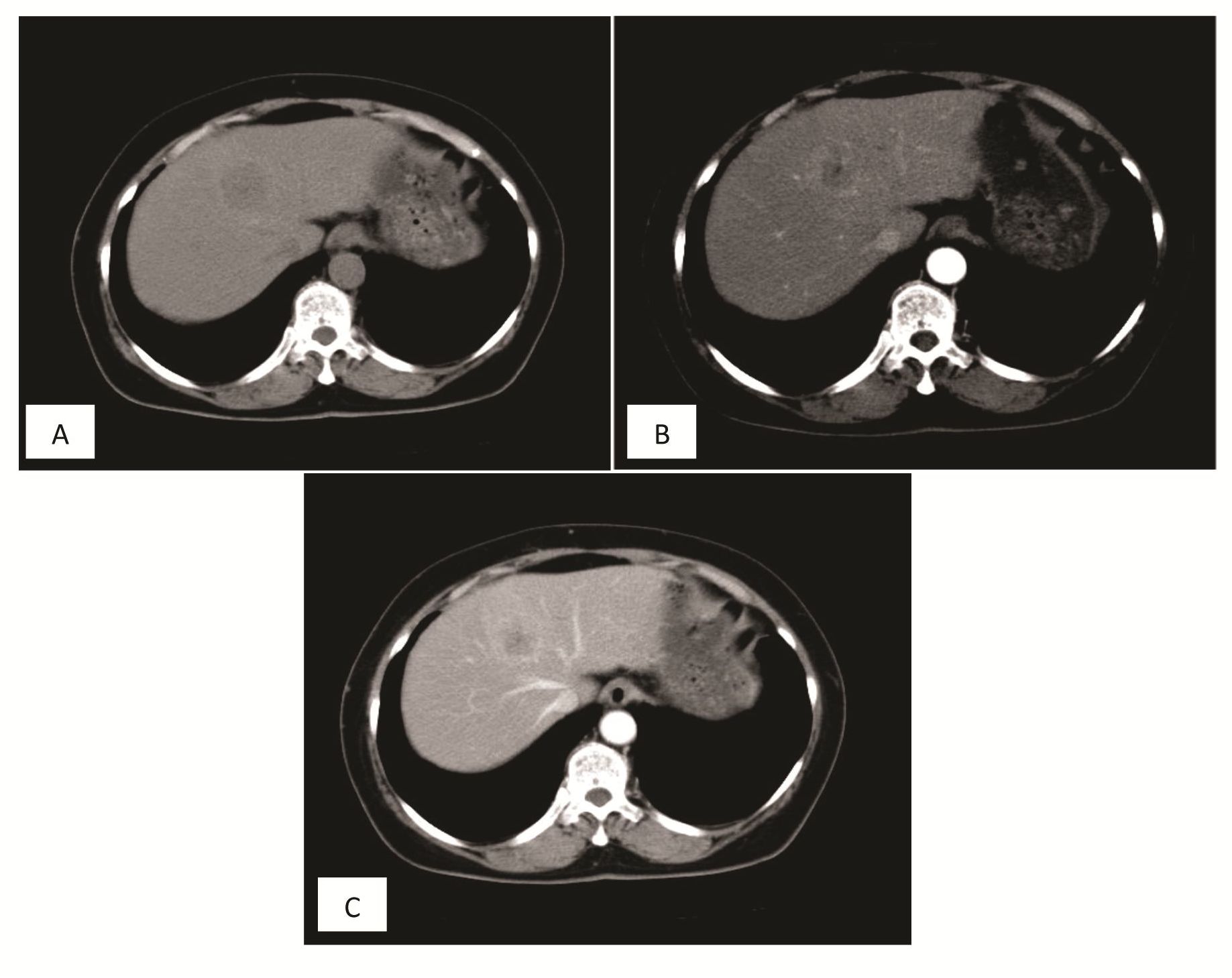 Figure 1 CT scan of the liver lesion
A.    Nonenhanced image shows a round hypodense lesion in hepatic segment 4a.
B.    Contrast enhanced hepatic arterial phase shows a hypervascularized mass in hepatic segment 4a.
C.    Contrast enhanced portovenous phase shows loss of enhancement of the mass which becomes hypodense relative to adjacent parenchyma.

The patient received a hepatic segmentec-tomy with lymph node dissection. Macroscopically, the liver segment showed a bulging, firm, round mass measuring 3.5 x 3.0 x 2.3 cm, with a solid tan-brown appearance (Fig. 2). Histopathological examination revealed a malignant small round cell tumor composed of round to oval-shaped, small-sized tumor cells arranged in nests with fibrovascular septa (Fig. 3). The tumor cells had small nuclei with inconspicuous nucleoli and finely granular chromatin. Immu-nohistochemically, the tumor cells were positive for CK7 and chromogranin A, but negative for CK20 and synaptophysin. The diagnosis of metastatic small cell carcinoma was made. Since the chest film and chest CT scan were negative, the gallbladder lesion was reviewed.

The gallbladder was infiltrated by similarlooking malignant small round cells with identical immunohistochemical profile (Fig. 4). The Ki-67 count was 23% comparable to mitotic counts (22/10 high power fields). The diagnosis was revised to NEC and the liver lesion was diagnosed as metastatic NEC, small cell type. The patient was treated by chemotherapy and referred to the local hospital for long-term management. 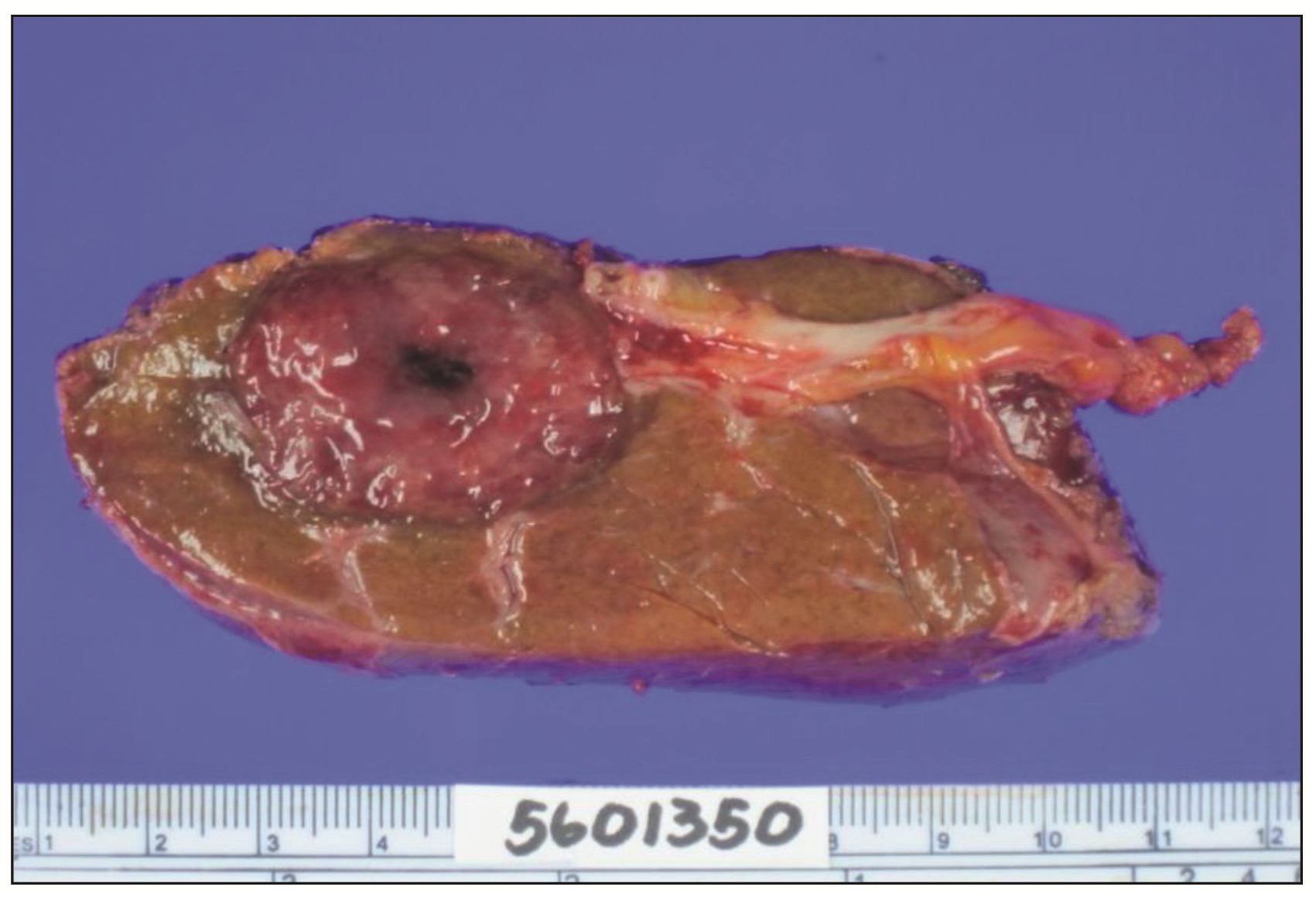 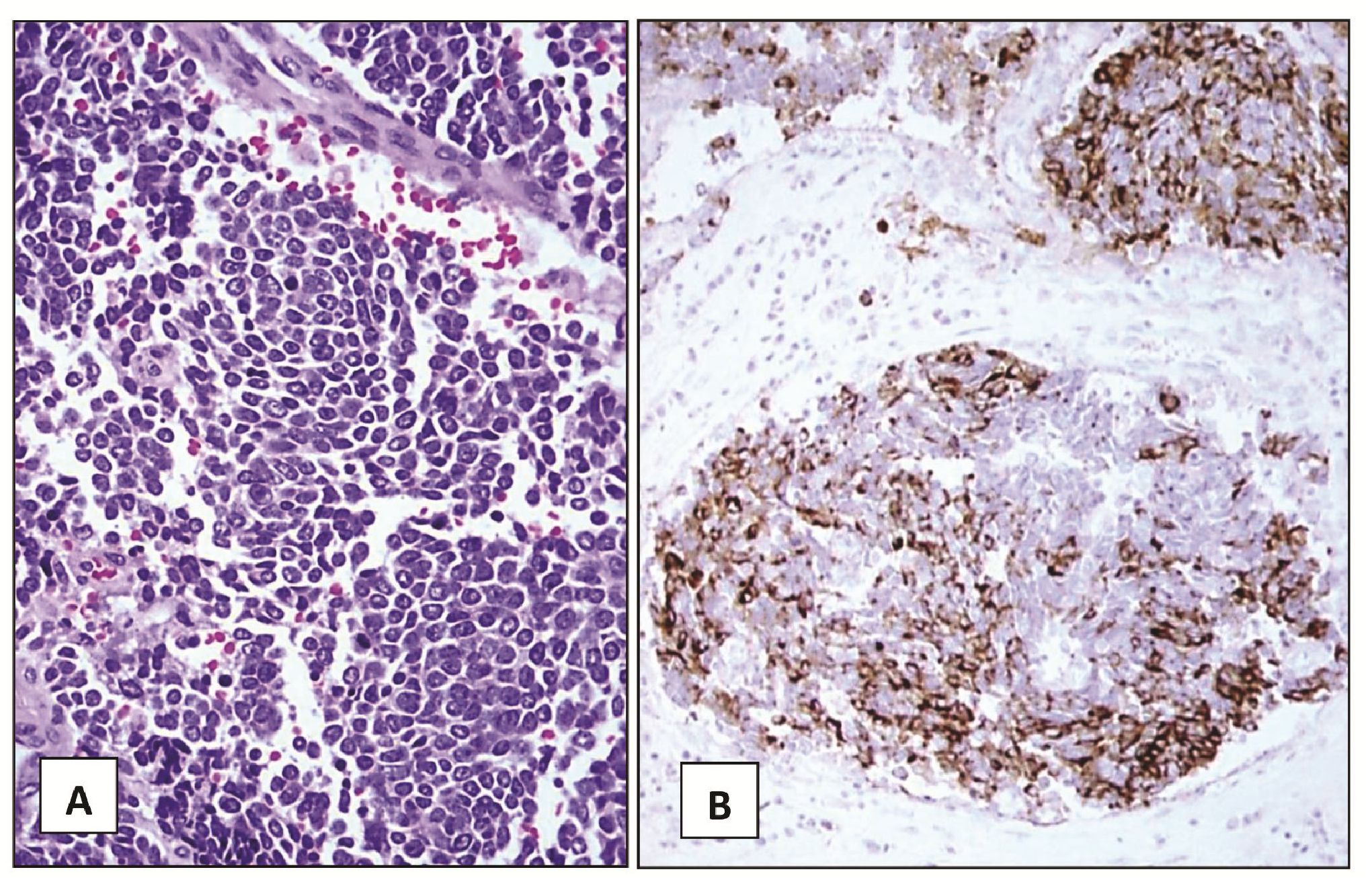 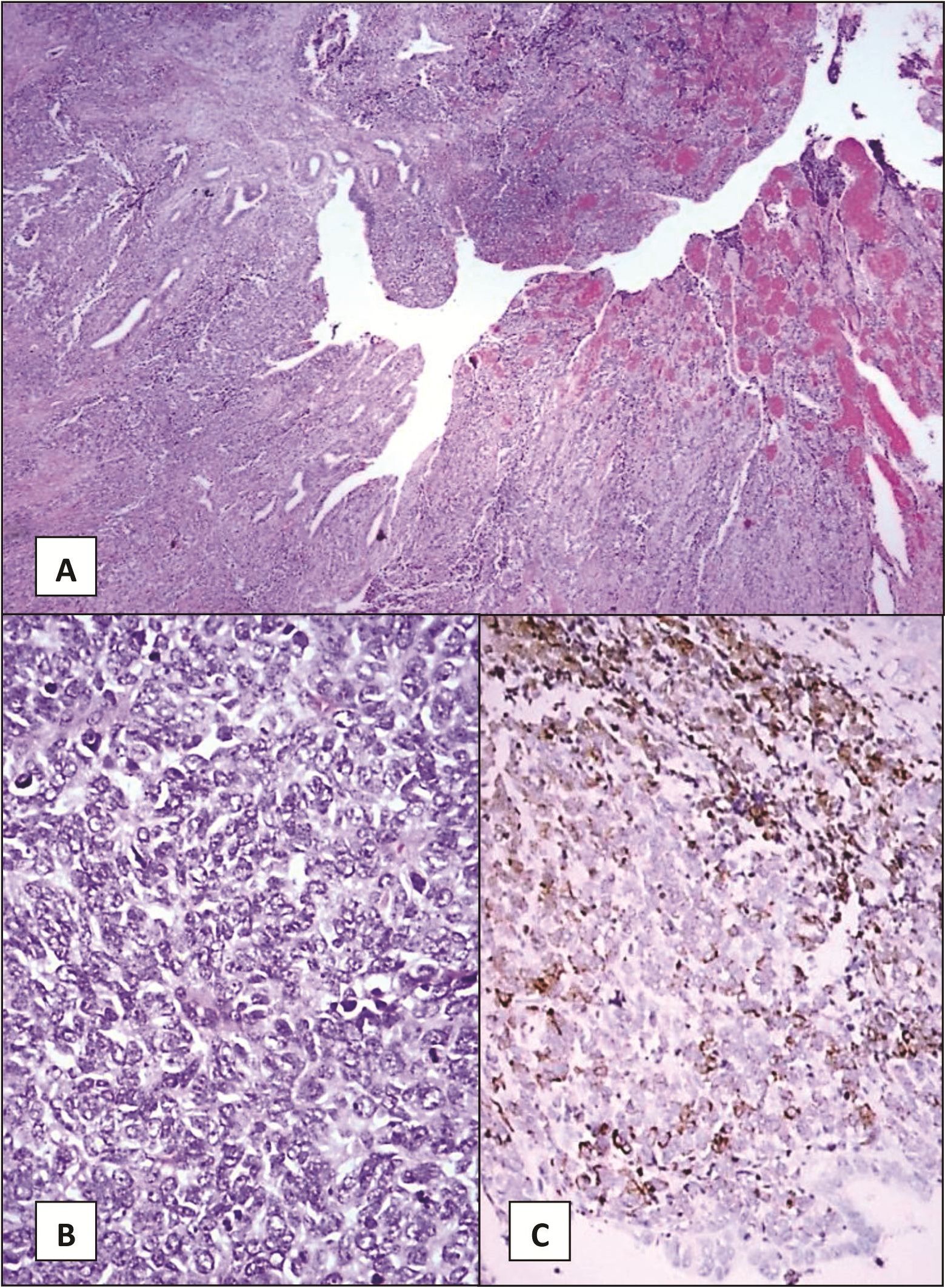 Figure 4 Gallbladder, cholecystectomy.
(A)    The gallbladder wall is infiltrated by nests of malignant small round cells. The mucosal surface is ulcerated and shows granulation tissue. (H&E, 40X)
(B)    Small round tumor cells exhibit small nuclei, inconspicuous nucleoli and small amount of cytoplasm (H&E, 200X)
(C)    The tumor cells are immunoreactive for chromogranin A (Immunostain, 100X)

Primary NETs of the gallbladder are uncommon and the diagnosis is rarely made preoperatively.7 Patients usually present with non-specific symptoms such as upper abdominal pain, abdominal discomfort or jaundice. Carcinoid syndrome was documented in only 0.1% of cases.7 Many cases of gallbladder NET are diagnosed incidentally with acute or chronic cholecystitis.7 Our patient was initially diagnosed to have poorly differentiated adenocarcinoma of the gallbladder until the metastatic hepatic tumor was detected. The diagnosis was revised to NEC, small cell type.

Neuroendocrine tumors of the gallbladder originate from neuroendocrine cells found in foci of intestinal metaplasia in the gallbladder epithelium. The metaplastic change can result from irritation by gallstones with or without associated chronic inflammation.7 Clinical and surgical findings cannot distinguish gallbladder NET from the garden variety carcinoma. The findings from ultrasound commonly show a well-defined mass with heterogeneous echogenicity at the gallbladder fundus.

One study showed that the metastatic rate was on average 43.5% for all types of NETs.8 For the carcinoid type, it was 42.6% and for the variant group (poorly differentiated NECs, small cell and large cell types) it was 45.9%. The two most common sites of metastasis were liver and lymph nodes (88% each), followed by lung and peritoneal cavity (23% and 19%, respectively).9

We describe a rare case of NET of the gallbladder. These tumors are clinically and surgically indistinguishable from garden variety carcinomas of the gallbladder. Radiographic investigations and histopathological examination are essential for making a correct diagnosis for further management. So far no matter how aggressive the treatment, the prognosis for gallbladder NETs is poor and the five year survival rate is worse than for NETs from other locations.

5.    Silvia Mezi et al. Neuroendocrine tumors of the gallbladder: a case report and review of the literature. Journal of Medical Case Reports. 2011; 5: 334.