Hemorrhage is a frequent cause of sudden and unexpected natural death. Rapid loss of about one-third of the circulating blood volume in the adult results in hypovolumic shock and sudden death1. Retroperitoneal hemorrhage due to a rupture of an abdominal aortic aneurysm is the most common extracardiac cause of sudden natural death2. This diagnosis is easily recognized by gross examination. A dark red mound projecting forwards over the lumbar spine and bulging at the root of mesentery are good hallmarks for diagnosis1, 2. Retroperitoneal hemorrhage may also originate from other rare causes such as rupture of vessels due to a pancreatitis complication. However, a sudden cause of death from retroperitoneal hemorrhage due to pancreatitis is rare and forms the basis for presenting this case.

A 73-year-old male suffered from triple vessel coronary artery disease and the coronary artery bypass graft operation was performed. He was uneventful until four days after discharge, he developed sudden unconsciousness at home and was immediately delivered to Ramathibodi hospital. Nevertheless, he was declared death on arrival. There was no history of trauma or abdominal pain prior to arrival.

The autopsy revealed massive diffuse retroperitoneal hemorrhage. Intraperitoneal hemorrhage was also observed, it was estimated 100 ml. The abdominal vessels and the major branches showed no perforation, aneurysm, and thrombosis. The pancreas revealed acute necrotizing pancreatitis with fat necrosis (Figure 1). It was prominently at head. Pseudocyst was not found. Peripancreatic arteries revealed absence of pseudoaneurysm and bleeding point. Gallstone and stone in bile duct was not seen. Other organs in abdomen revealed unremarkable change. 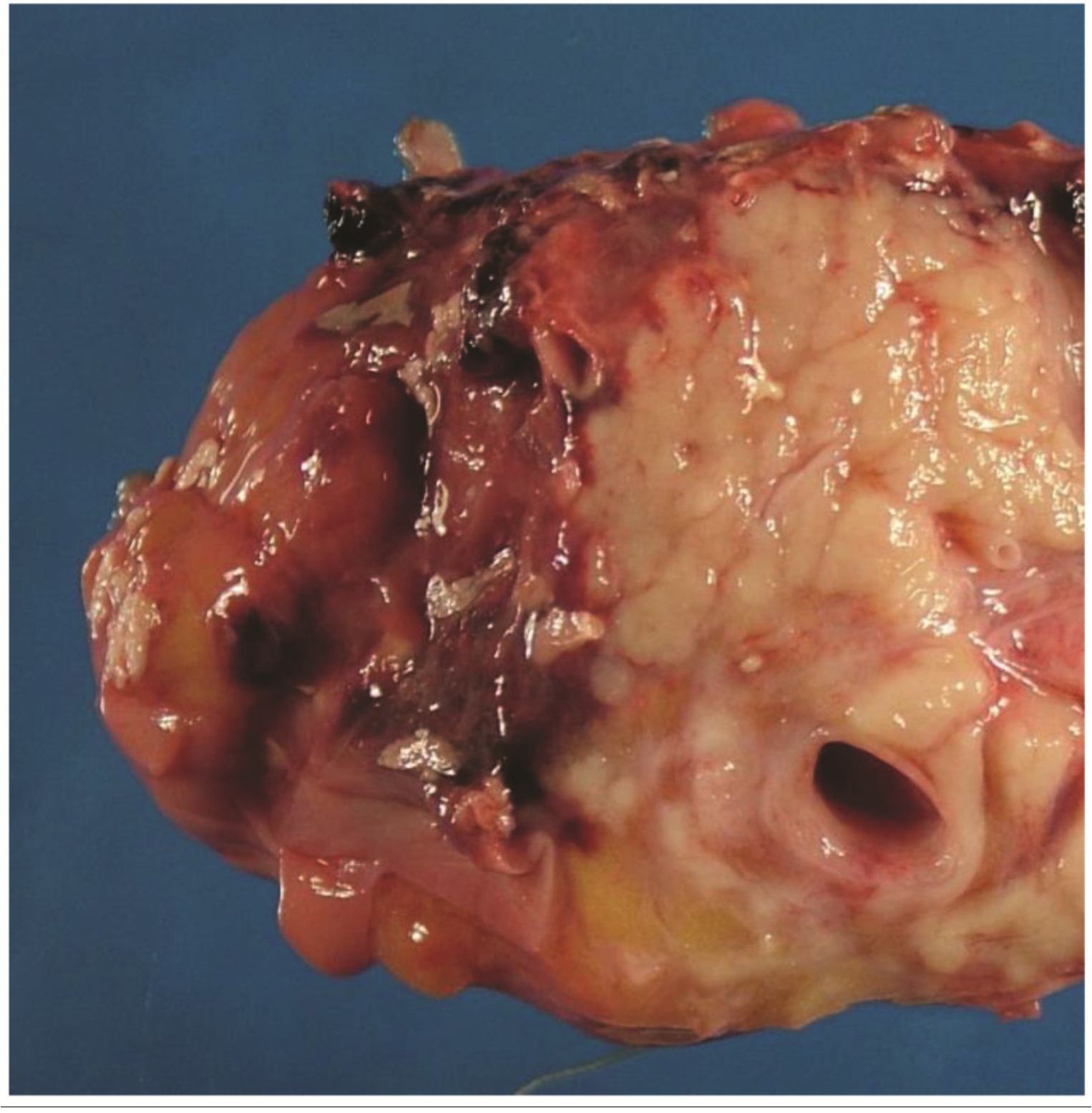 All coronary artery bypass grafts were patent. The myocardium showed multiple foci of old and recent myocardium infarction. Histological examination at head of pancreas around the bleeding site showed necrosis of pancreatic acini and ducts. Concomitant infiltration with numerous lymphocytes admixed with patchy areas of polymorphonuclear leucocytes was noted. Fat necrosis and interstitial hemorrhage were also noted. The findings were consistent with acute necrotizing pancreatitis. The most important findings were that peripancreatic muscular artery at the head of pancreas showed infiltration with numerous acute inflammatory cells and this vascular wall showed necrosis and rupture (figure 2,3). The elastic stain demonstrated that the disruption of elastic lamina at the rupture site. 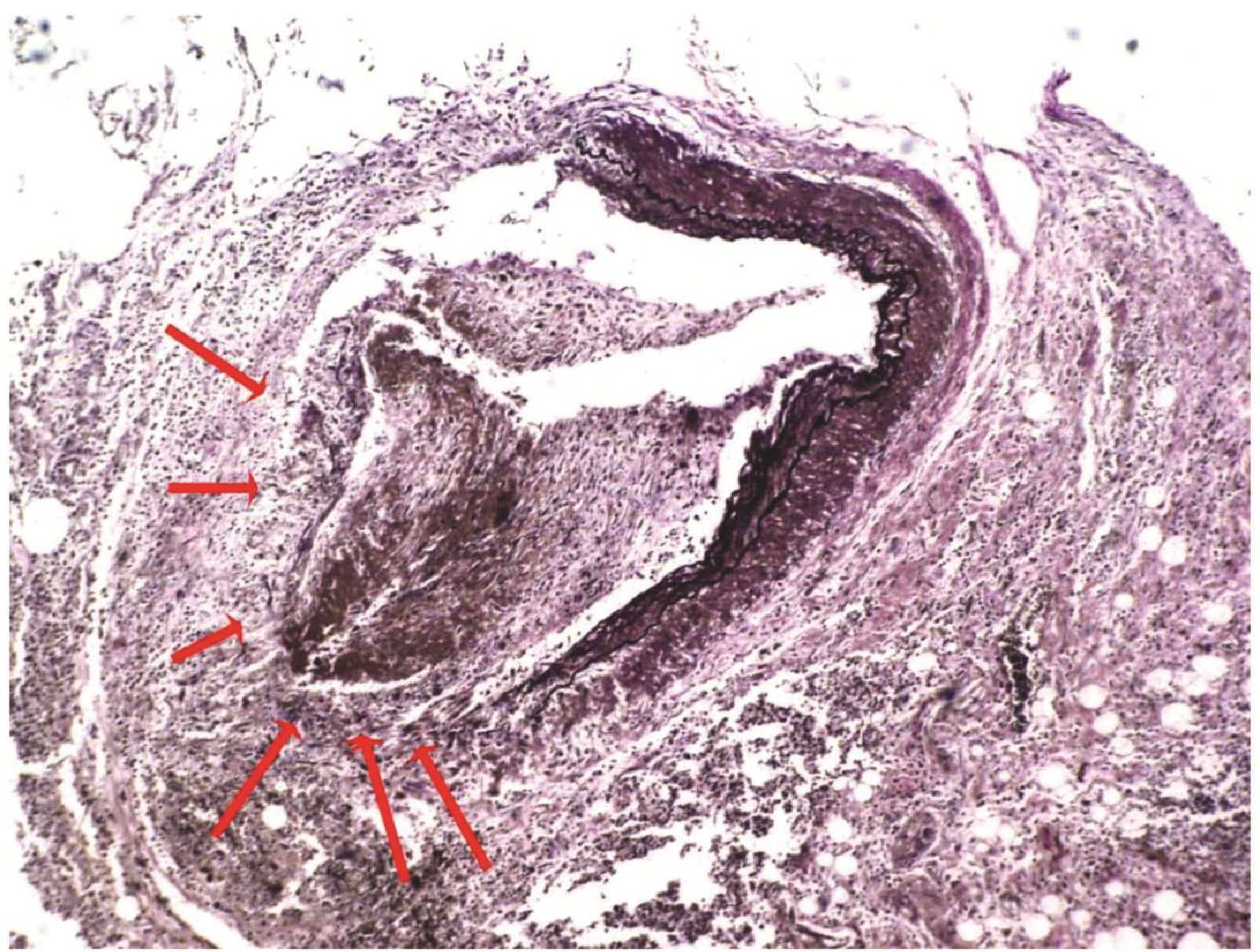 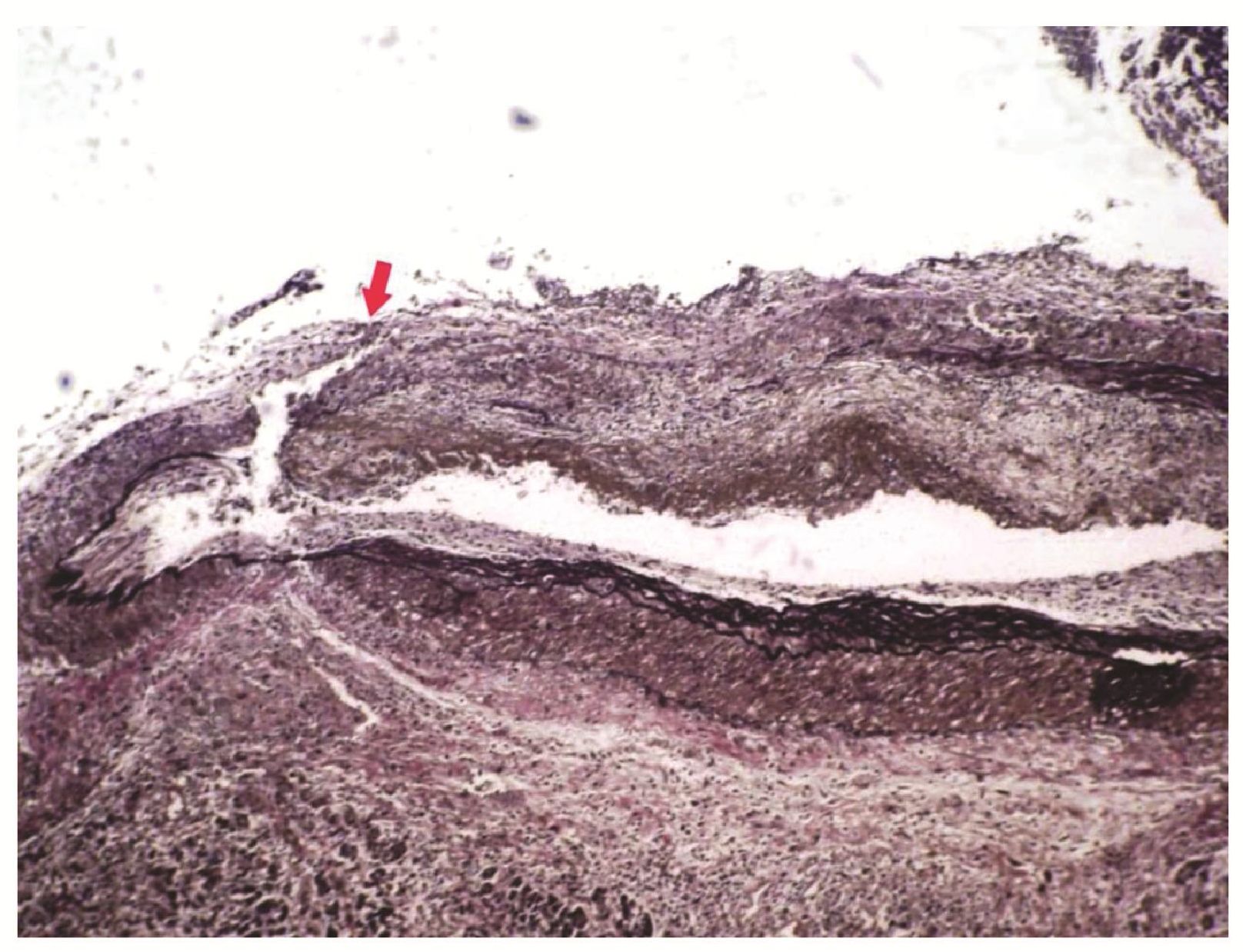 Retroperitoneal bleeding is frequently caused by trauma or rupture of an abdominal aortic aneurysm. However, this case was caused by necrotizing pancreatitis. In patients with necrotizing pancreatitis, the mortality rate was high, namely up to 17%3. Vascular complications in pancreatitis are rare and the pseudoaneurysm is the most common one4. There were many reports regarding rupture of pseudoaneurysm which were associated with either acute or chronic pancreatitis4-7. Other pancreatic complications, such as pseudocysts, may cause erosion of vessels and eventually result in hemorrhage4,7,8. These complications were not found in our case.

Major vessel erosion without pseudoaneurysm formation resulting in severe bleeding into the gastrointestinal tract, retroperitoneum and peritoneal cavity were previously reported8. Acute pancreatitis may result in vascular damage via fat necrosis, vasculitis, or thrombosis which may eventually cause vascular rupture with or without pseudoaneurysm in the lesions5-11. There have been many case reports regarding retroperitoneal hemorrhage associated with pancreatitis but none of these mentioned the sudden death from this complication. Our case appears to be the first case report of sudden death from retroperitoneal hemorrhage due to rupture of arterial vessel in the process of acute necrotizing pancreatitis

There were many vessels responsible for bleeding or pseudoaneurysm in pancreatitis: gastroduodenal artery, superior and inferior pancreaticoduodenal artery, dorsal pancreatic artery, hepatic artery and branches, left gastric artery, gastroepiploic artery, splenic vein, and portal vein5-8,11,12. Splenic, gastroduodenal, and superior pancreaticoduodenal arteries were the most common affected vessels7,8,12. In this case, the bleeding point was not found grossly because of massive hemorrhage obscuring peripancreatic area. Nevertheless, the point of bleeding was identified in the microscopic section and revealed rupture of the peripancreatic muscular artery at the head of pancreas. This shows that the histological examination is very important for determining rupture site especially when it is very small and easily missed in the gross examination.

Acute pancreatitis is characterized clinically by the presence of acute and constant pain in upper abdomen, but it may be more localized to the right upper quadrant, epigastric area, or occasionally left upper quadrant13,14. Pain might last for several days, radiate to the back, and be associated with nausea and vomiting13,14. Surprisingly, our present case had no abdominal pain which may be due to the matter that the pain was obscured by the presence of the previous surgical wound at chest wall locating near the upper abdomen.

Necrotizing pancreatitis with fat necrosis may erode the vessels and cause retroperitoneal hemorrhage. We proposed that when retroperitoneal hemorrhage is detected in a sudden and unexpected autopsy case, the examiners should realize that the pancreatitis may be one of the possible causes and histological examination is required for determining the rupture or bleeding site, especially when the gross examination cannot detect the bleeding site.

12.    Balachandra S, Siriwardena AK. Systematic appraisal of the management of the major vascular complications of pancreatitis. Am J Surg. 2005;190:489-95.