Adrenal cortical adenoma arising in adrenohepatic fusion is an exceedingly rare occurrence. It can potentially be misinterpreted as hepatocellular carcinoma as they share radiologic and histologic similarities. We report an incidental subcapsular adrenal cortical adenoma arising in adrenohepatic fusion tissue in segment 7 of the liver in a 60 year-old female. The tumor contains all three components of adrenal cortical tissue (predominantly zona fasiculata-like area), with positive immunoreactivity for Melan-A, calretinin, a-inhibin and CD56; Hep-Par-1, glypican-3 and chromogranin A are negative.

Adrenohepatic fusion is (AHF) is defined as adhesion of the liver and right adrenal cortex with close intermingling of the respective parenchymal cells. It is a type of adrenal heterotopia and usually involves the right adrenal gland and right lobe of liver. Only a few cases of adrenal cortical adenoma (ACA) arising in AHF have been reported. Most cases are asymptomatic (non-functioning tumors), being detected incidentally on radiologic studies which usually reveal arterial enhancement and rapid venous washout during portal phase. Thus, hepatocellular carcinoma (HCC) is always a radiologic differential diagnosis. Moreover, histologic findings of ACA arising in AHF can mimic those of HCC. We report a rare case of ACA arising in AHF with radiologic, pathologic and immunohistochemical correlation.

A 60 year-old Thai female with diabetes mellitus, hypertension and dyslipidemia underwent computerized tomographic angiography (CTA) for coronary artery disease surveillance. An incidental subcapsular nodule was detected in segment 7 of the right hepatic lobe. Magnetic resonance imaging (MRI) revealed a 1.2 cm-diameter, fat-containing nodule with rapid arterial enhancement in arterial phase and rapid venous washout in portal phase without Primovist® (Hepatocyte specific contrast agent) uptake. The radiologic differential diagnoses were steatotic hepatocellular adenoma and HCC with fatty metamorphosis. The intra- and extrahepatic biliary tract, gallbladder and pancreas were unremarkable. She was asymptomatic with no known risk factors for HCC. Physical examination was unremarkable. The complete blood counts and liver function tests were normal. Surgical removal was performed in view of suspicion of malignancy. Intraoperatively, the right adrenal gland was found adhered to the nodule in segment 7 of the liver. Limited hepa-tectomy and partial resection of the adrenal gland were performed. Review of the preoperative MRI revealed attachment between the right adrenal gland and segment 7. Postoperative MRI showed no tumor recurrence with normal appearance and position of the residual right adrenal gland. 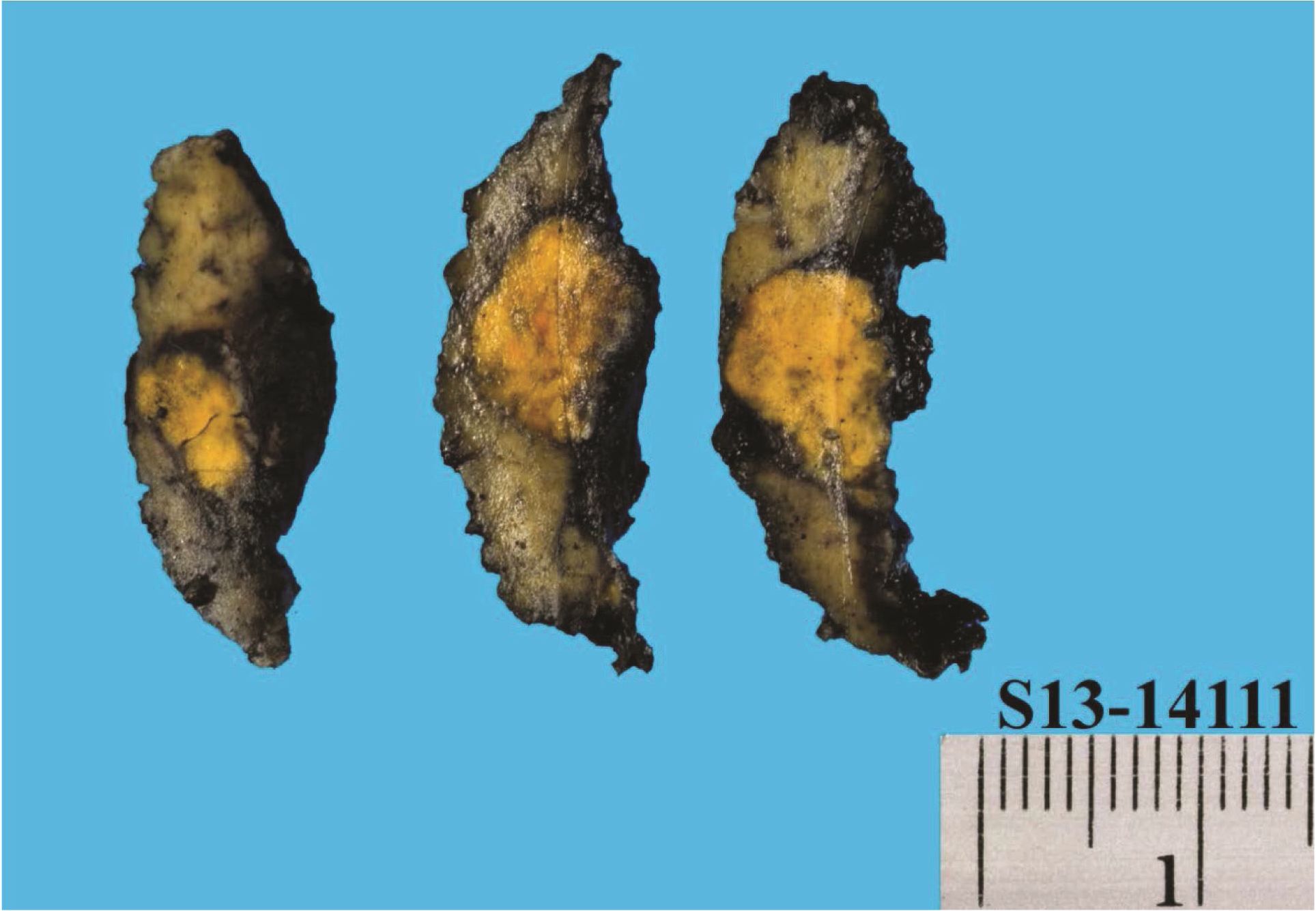 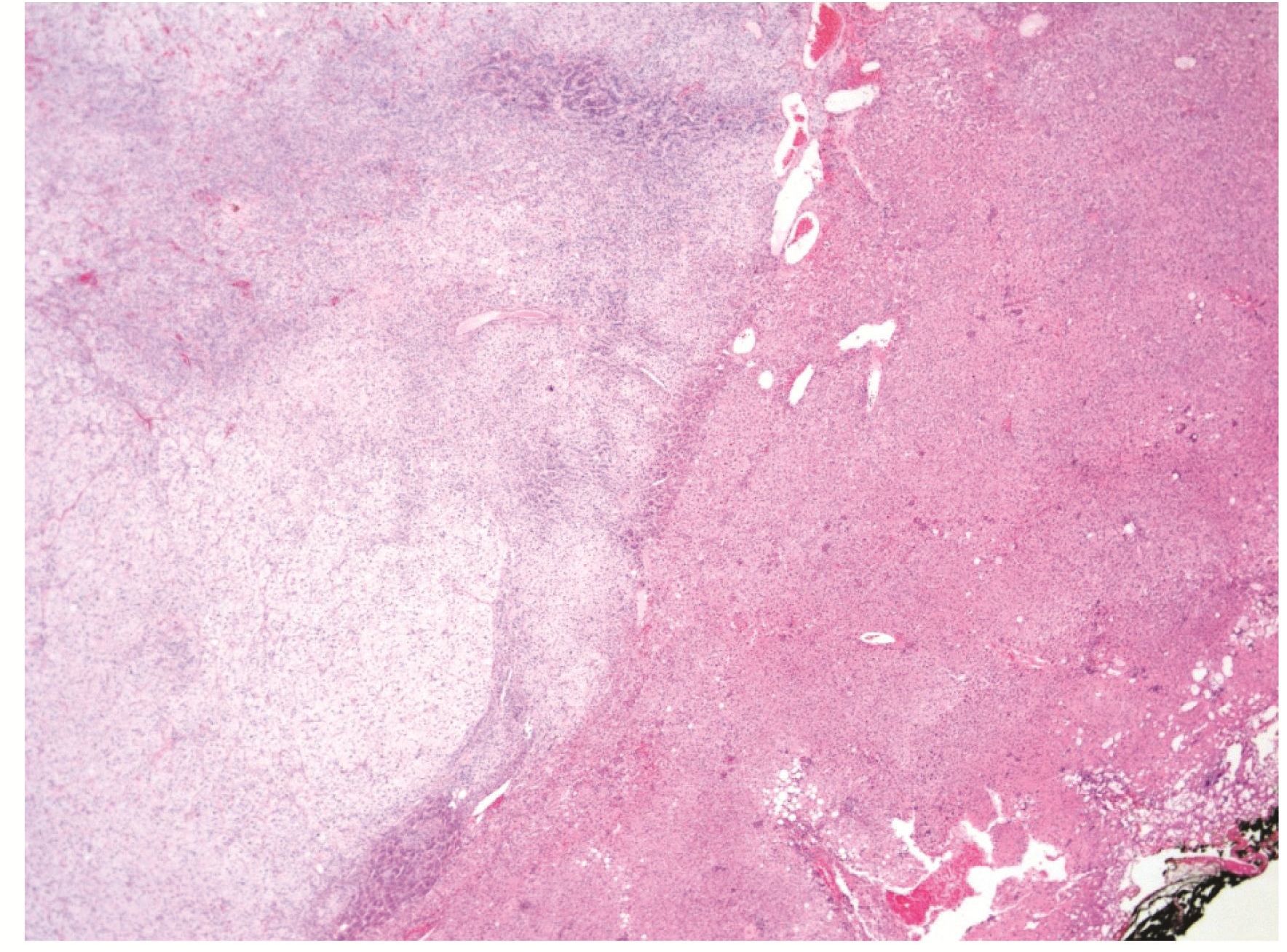 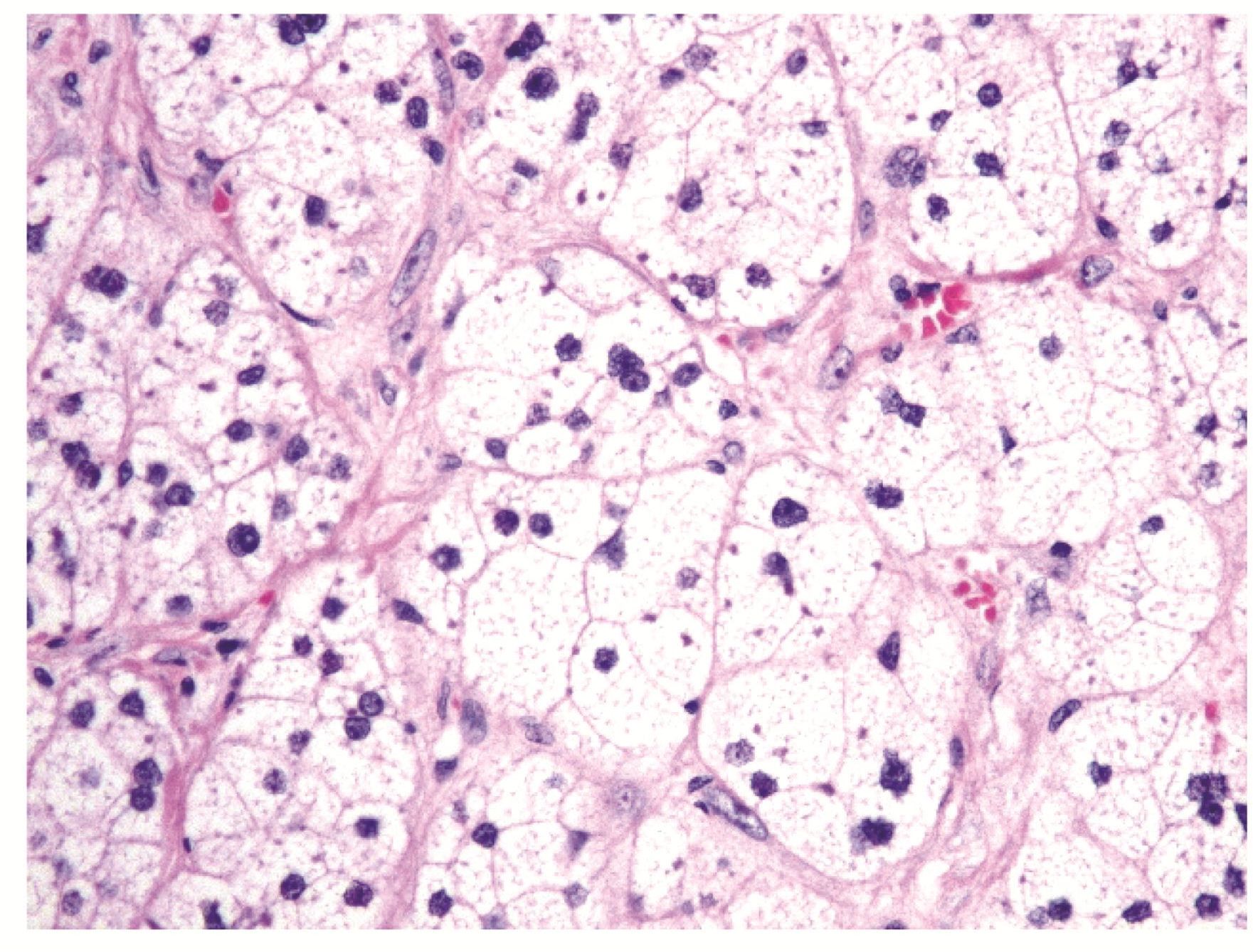 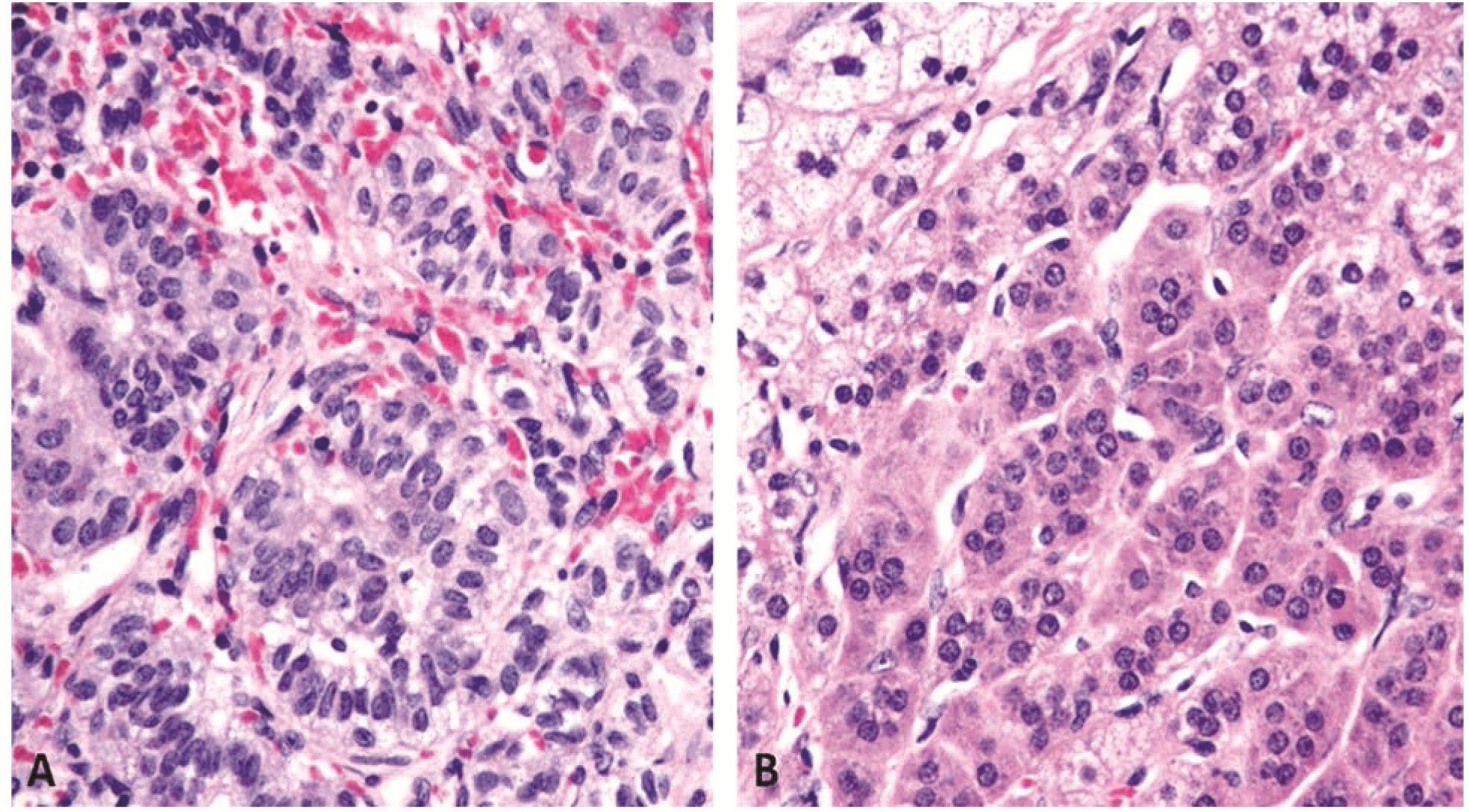 Immunohistochemical studies revealed the tumor to be positive for CD56 (diffuse strong), and Melan-A and calretinin (predominantly in ZF-like parts). The ZG-like area was positive for vimentin. Weak cytoplasmic positivity for a-inhibin and syn-aptophysin was observed in the ZR-like area. No immunoreactivity of chromogranin A, HepPar-1, glypican-3, Cam5.2, EMA and S100 protein was noted. The Ki-67 labeling index was less than 1%. 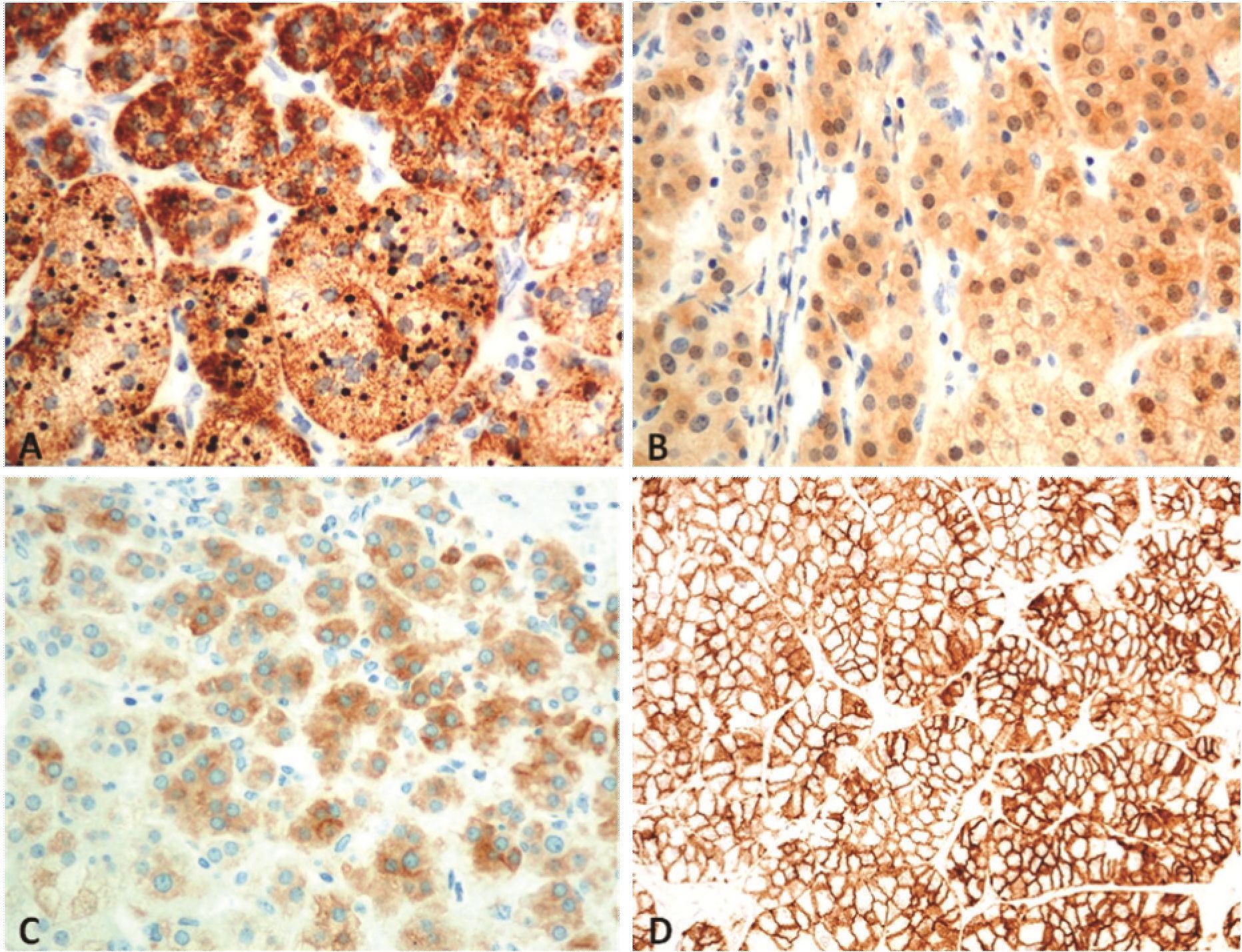 The abnormal developmental anomalies of adrenal glands are classified into two groups. The first group is ectopic or accessory adrenal tissue, known as adrenal rest tissue. It is fragmented from the parent adrenal gland on the same side during development. It may contain only cortical tissue or both cortical and medullary tissue, depending on whether the fragments break off before or after migration of neural medullary tissue into the cortex2. The second group is adrenal heterotopia which occurs very rarely. It happens when the primordial adrenal does not separate from the coelomic epithelium. The heterotopic adrenal gland is the only adrenal gland on that side that is partly or wholly incorporated into contiguous organs such as the kidney or liver. Heterotopic adrenal gland clinging to the liver is further subdivided into adrenohepatic fusion and adrenohe-patic adhesion.

In an autopsy study by Honma (1991)1, AHF was identified in 63 of 636 unselected autopsy cases (9.9%). Its incidence was much higher in older age groups, suggesting that AHF may be an ageing phenomenon.

ACA arising in AHF is extremely rare. We found only four previously reported cases (Table 1). Most cases occurred in females in the 4th- 6th decade as asymptomatic incidental findings discovered on radiologic studies. One case, however, presented with primary aldosteronism4. Interestingly, all reported cases were from Asia.

The radiologic and histologic findings could deceptively mislead pathologists into making a diagnosis of HCC with clear cell/fatty change. We would like to point out that clinical history, gross examination, histologic findings and immunohisto-chemistry are helpful to separate the two tumors.

Patients with HCC tend to have a clinical history of etiologic risk factors of HCC (e.g. chronic viral hepatitis, chronic alcoholism, non-alcoholic steatohepatitis, and food contamination with afla-toxin)5, and physical signs of chronic liver disease. Serum a-fetoprotein levels may or may not be significantly elevated. ACC arising in AHF almost always presents as an incidental finding. Rarely, it may be associated with steroid hormone-related syndrome.

Radiologic findings of AC A arising in AHF usually consist of a hypervascularized mass with enhancement in arterial phase and rapid venous washout during portal phase3, 6 7; this is difficult to differentiate from HCC. The tumor in our case also appeared to be a fat-containing lesion; the preoperative radiologic differential diagnosis were hepatocellular adenoma, HCC with fatty metamorphosis, and hepatic angiomyolipoma.8, 9 10

The gross appearance of a bright yellow subcapsular tumor (resembling adrenal cortical tissue) associated with solid attachment of the adrenal gland to the right lobe of the liver are highly suggestive of ACC arising in AHF.

However, in some cases immunohistochem-ical confirmation may be warranted. ACC immuno-reacts with Melan-A, calretinin and inhibin. HCC is positive for Cam 5.2, HepPar-1 and glypican-3.

In conclusion, we report a case of 60 year-old female with an incidental ACC arising in AHF.

The rarity of this tumor and the radiologic and histologic similarities with HCC make it a potential diagnostic pitfall. Close clinicopathologic correlation should lead to the correct diagnosis.