A 41-year-old man was found suspended 15 cm above the floor, hanging from the long handle-bars of a two-wheel ‘walking behind’ tractor. The floor was downward sloping and muddy, which caused the tractor to dig into the floor, raising the long handle bars under the arms of the victim, and pushing him against a pillar. This occurred in the basement of the house. Being crushed in this basement with low ceiling, and between the machine and the pillar, resulted in compression of the thoraco-abdominal area, causing traumatic asphyxia. Investigation of the scene and analysis of the situation were able to clearly identify the position and location of the injuries found in the victim, and the cause of these injuries. This is a case of fatal thoraco-abdominal compression. The death scene investigation and autopsy findings revealed the cause and manner of death to be accidental traumatic asphyxia. This type of accident is prone to occur in Thailand if there is no prevention because many Thai farmers have this style of house design and always keep their tractors and other farm implements under the basement with low ceiling.

Asphyxia is defined as any condition that leads to tissue oxygen deprivation. Traumatic asphyxia is a type of mechanical asphyxia, where respiration is prevented by external pressure on the body, inhibiting respiratory movements and compromising venous return from the head. Conditions such as compression of the thoraco-abdominal area under a heavy weight and wedging of the body within a narrow space or large crowds have been reported1 3.

Autopsy findings in such cases will include intense facial congestion and swelling with florid petechiae of the conjunctivae, face and upper chest1,2. The most widely accepted explanation is that the crushing injury puts pressure on the mediastinum and the heart. This pressure forces blood out of the right atrium in a retrograde fashion into the valveless innominate and jugular veins. This results in a sudden and rapid increase in the pressure of the small venules and capillaries of the face and head, resulting in petechial hemorrhages4.

A 41-year-old man was found suspended 15 cm above the floor of the space under the house, compressed by the long handle bars of a two-wheel ‘walking behind’ tractor. He was in a vertical position compressed against a pillar (Figure-1) and under the ceiling of the basement with low space under the house. The height from the floor to the ceiling was 160 cm. The ceiling was actually the underside of the house floor. This house was where he had been living and the tractor was kept in this under-floor space, together with other stored items.

The victim was taken to the Forensic Department of Naresuan University Hospital for further examination. The victim measured 154 cm in height and 40.1 kg in weight. 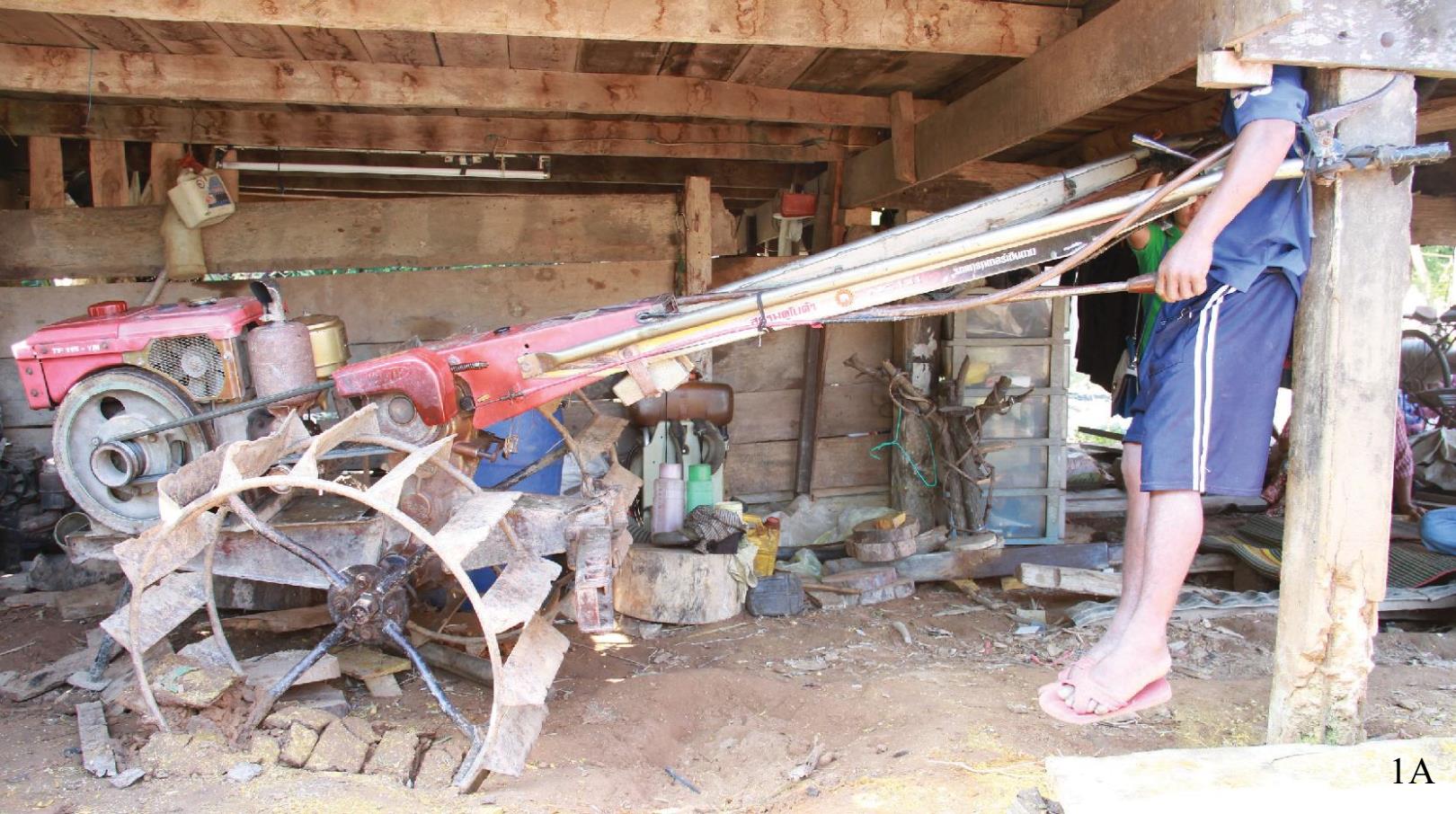 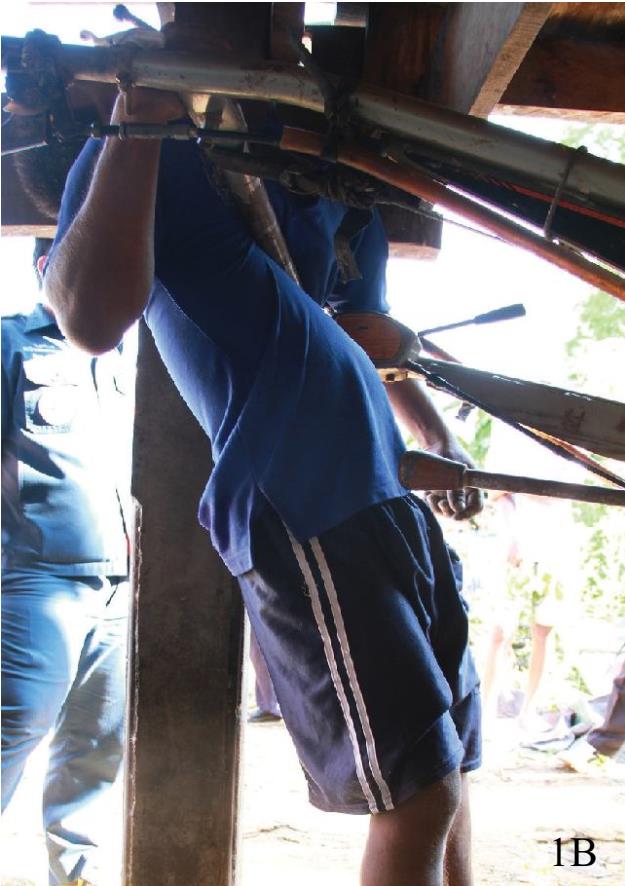 Figure 1 1A and 1B: Victim compressed by handle-bar of two-wheel walking behind tractor with pillar of the basement. 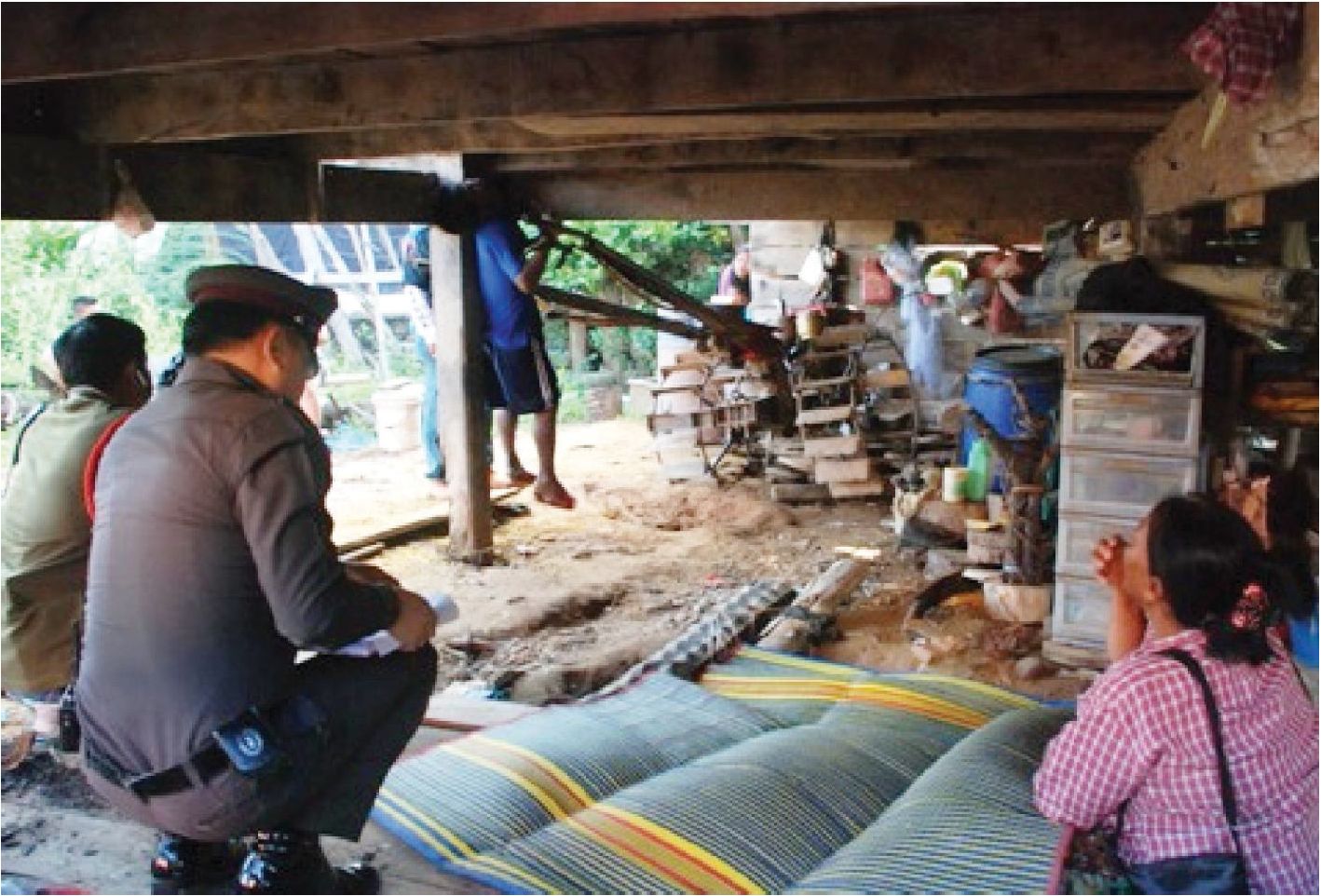 Figure 2 Showing the basement that the fanners always keep the tractor and any stuff. 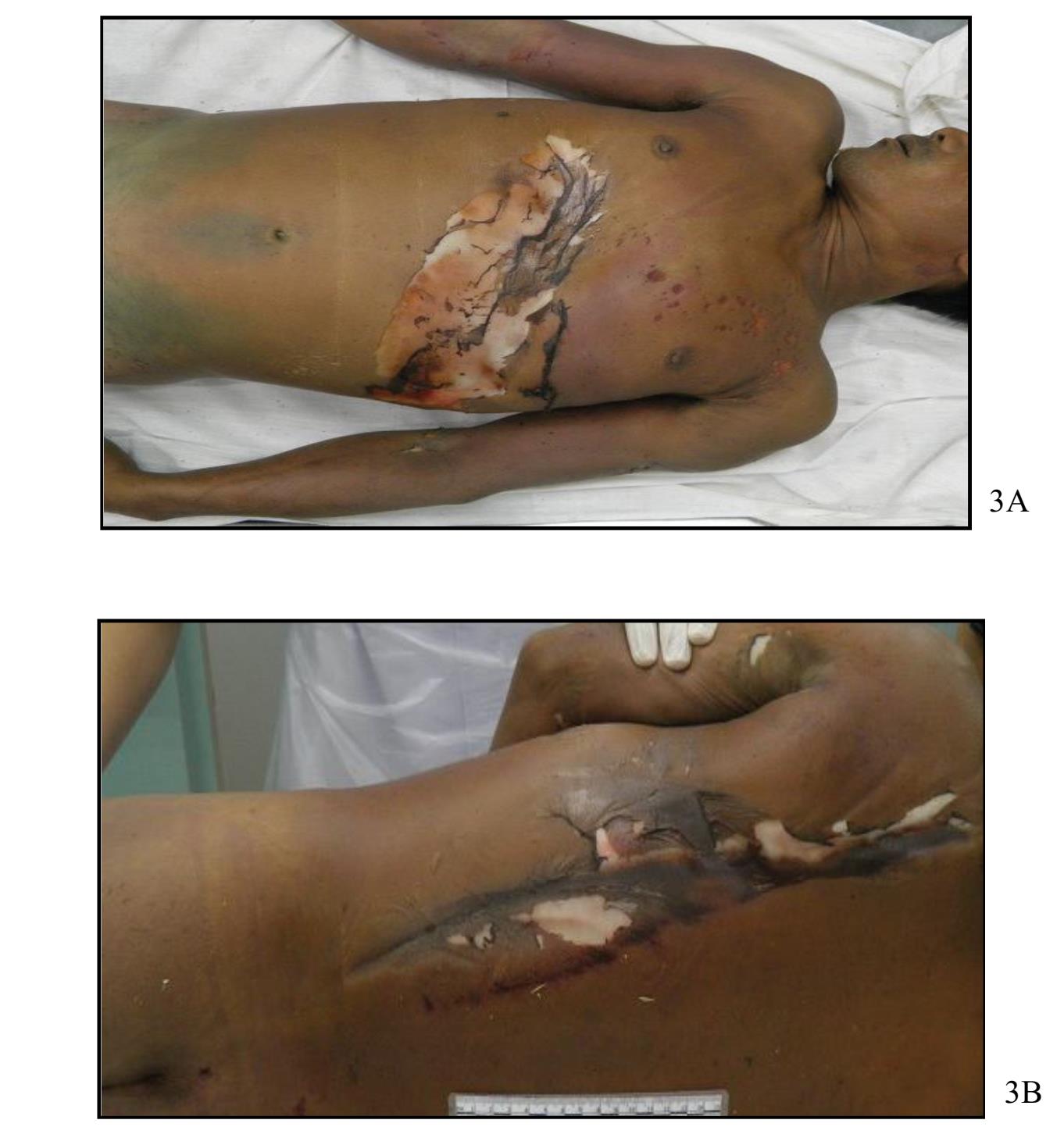 Figure 3 3A and 3B: Showing the linear postmortem abrasion on the front and back of chest wall

On gross physical examination; the face, neck and upper part of the chest were congested and petechial hemorrhages were observed on the conjunctivae and skin around the eyelids with prominent lividity on both legs. Postmortem abrasions were found along the epigastrium and just below the left chest wall area in transverse fashion measuring 10x20 cm. A group of postmortem insect-bite wounds on the left upper chest wall measured 0.4-1.0 cm in diameter. Postmortem abrasions along the left side of the back in longitudinal fashion measured 4x50 cm. Greenish discolorated skin was observed on the lower abdomen. Intramuscular and subcutaneous hemorrhages were present in the chest wall during autopsy. The left sixth to tenth and the right fourth to ninth ribs showed fracture-sites on the anterior aspect and adjacent to the spine. The fractures were accompanied by minimal bleeding in the surrounding soft tissues and muscles. The brain weighed 1,200 g with normal appearance on both gross and microscopic examination. Gross examination of both lungs revealed congestion with moderate contusion areas at both lower lobes. The microscopic examination of the lung tissue showed interstitial and alveolar hemorrhage. Tracheal mucosa showed no abnormality and no airway obstruction. The heart weighed 220 g. There was no abnormal pathology in gross and microscopic appearance. The aortic arch and valves appeared normal. All organs in the abdomen were severely congested with early decomposition.

Analysis of the blood specimen revealed none of the substances screened for in the systematic toxicological methods.

Given the outcome of the crime scene investigation together with the autopsy findings, manner and cause of death were established as accidental traumatic asphyxia due to blunt chest trauma from an agricultural machine injury.

We proposed that this accident was due to the matter that the victim started the engine and drove the tractor out of the site by changing gear into reverse position by mistake. The machine became out of control and pushed the victim’s body back against the pillar and upward against the low ceiling. He was thereby crushed into the suspended position as seen in the scene.

Traumatic asphyxia or Perte’s syndrome results from a severe crush injury of the thorax. The first explanation for the development of the syndrome was offered by Tardieu in 1866, when he stated that “punctiform ecchymosis of the face, neck and chest are caused by the effort in which resistance to suffocation manifested itself’ u.

Even though, the typical pathological features of crush asphyxia include intense purple congestion of the head and neck with petechial hemorrhages of the face, neck, upper chest and conjunctivae, features were not seen in our case, there were evidence showing that some people who die of traumatic chest compression may not have petechiae69.This may be due to the fact that chest compression is great enough to impair the left heart function as well as the right. Increased cephalic venous pressure will not develop in this scenario because even though the venous return is impaired, the input arterial pressure is also compromised.

There were many causes responsible for traumatic asphyxia including entrapment beneath or in motor vehicles or heavy machinery, crushing in large crowds caused by the wedging of the body within a narrow space when the members of the crowd were panic, surge or ‘stampede’. Crush asphyxia has been described in all of these scenarios6-8.

Torso compression was found to be the most common mechanism of asphyxiation of victims within vehicles6. Although it was suggested that the mortality in crush asphyxia may be influenced by the presence of other injuries, concomitant injuries may be useful as markers for the severity of compression8. Byard et al stated that the pattern of pathological findings of traumatic asphyxia was not influenced by the presence or absence of concomitant serious or lethal injuries8. As alcohol may impair a victim’s ability to judge a situation or to extract him or herself from unsafe circumstances; it is important to detect the level of alcohol in toxicological examination. However, even though it was reported that crush asphyxia cases following vehicle accidents was significantly associated with alcohol use6. Other causes including malfunction of the modified engine of the vehicle and malfunction due to inappropriate maintenance were also put into consideration.

The cause of death in our case was determined to be accidental traumatic asphyxia without other associated fatal factors. No evidence of neck compression, use of drugs, alcohol, or other causes that could lead to death were found.

Although the report of traumatic asphyxial death from other agricultural machines was reported, the traumatic asphyxial death from ‘walking behind’ tractor as seen in our case has not been reported in the literature. We would like to emphasize that this type of accident is prone to occur again in Thailand because Thai farmers frequently have this style of house design and always keep their tractor and other farm implements under the basement low space under the house. The safe way to prevent this accident is to keep the tractor in a garage or other building with ample space above and around while the machinery being operated.

The authors wish to thank Dr.Supinda Sirilak and Research Unit of Medical Faculty of Nar-esuan University for their informative suggestions and Mr.Roy Morien (Naresuan University language clinic) for editing English.