Adrenal myelolipoma - case report of an incidentaloma of the adrenal gland

Adrenal myelolipomas are rare benign tumours of the adrenal gland which are usually asymptomatic in nature. The reported incidence of this tumour is 0.08 to 0.2% from all primary tumours of the adrenal glands. With the advent of imaging techniques such as ultrasonography, computed tomography and magnetic resonance imaging almost 15% of the adrenal masses are incidentally diagnosed as myelolipoma, hence these tumours are also called as incidentalomas. Here we present such a unique case of incidentaloma in an otherwise healthy female. Since the size of the tumour detected on contrast-enhanced computed tomography (CECT) was large, surgical resection was done. The confirmatory diagnosis was made on histopathological examination of the resected specimen.

Adrenal myelolipomas are rare benign tumours of the adrenal gland composed of variable mixture of mature adipose and haematopoietic elements. These tumours are usually asymptomatic in nature. It was first described by Gierke in 1905. Later, in 1929 Charles Oberling named these tumours as 'formations myelolipomatoses'(1). The reported incidence of this tumour is 0.08 to 0.2% from all primary tumours of the adrenal glands. With the advent of imaging techniques such as ultrasonography, computed tomography (CT) and magnetic resonance imaging (MRI), almost 15% of the adrenal masses are incidentally diagnosed as myelolipoma, hence these tumours are also called as 'incidentalomas'(2).

The age of presentation varies from 50 to 70 years with an equal gender predilection. Adrenal myelolipomas are usually unilateral and are non-secretory in nature. Most of the patients are asymptomatic. Symptoms such as flank pain and abdominal discomfort are seen in few patients because of pressure of surrounding structures(3).

Here we present such a unique case of an incidental finding of a rare benign adrenal tumour in an otherwise healthy female. Since the size of the tumour detected on contrast-enhanced computed tomography (CECT) was large, surgical resection was done. The confirmatory diagnosis was made on histopathological examination of the resected specimen. The present case has an unusual presentation as the patient was in the fourth decade of life (38 years old) and the dimensions of the adrenal myelolipoma were larger than 4 cm. Although, the patient was not having any symptoms of a hormone-secreting tumour, the patient presented with abdominal pain.

A 38-year-old female presented to the Surgery Outpatient Department (OPD) with the complaints of pain in left lower abdomen since last one year. The pain developed insidiously and was moderate in intensity. Her menstrual history was normal and no significant past history was present. On physical examination, the abdomen was soft and no guarding or rigidity was seen. However, there was tenderness in the left lumbar region. Her pulse and blood pressure were normal. Routine blood examinations and biochemical parameters were within normal limits. She was advised CECT to rule out the any significant renal diseases causing pain in lumbar region. CECT revealed a well-defined lesion of fat attenuation with few enhancing soft tissue components in the left suprarenal region measuring 7.3 x 4.2 x 2.3 cm in size, displacing the left kidney slightly inferiorly. No evidence of calcification, haemorrhage or necrosis was noted within the lesion. The features were suggestive of left adrenal myelolipoma. Based on CECT findings and considering the large size of the tumour, surgical resection was done. The resected specimen was sent for further histopathological examination.

Grossly the specimen of adrenal gland measured 7 x 5 x 2.5 cm with partly attached fibrofatty fragment on external surface. The cut surface showed a well-circumscribed growth greyish yellow to tan brown in colour with few small haemorrhagic spots (Figure 1). Microscopy revealed a well-circumscribed tumour (Figure 2A) composed of lobules of mature adipocytes separated by fibrous septae. There was presence of intervening haematopoietic elements containing erythroid precursors, myeloid precursors and megakaryocytes (Figure 2B). No atypical cell was seen. Based on the characteristic morphological features, the diagnosis of adrenal myelolipoma was confirmed.

The post-operative period of the patient was uneventful and no further follow-up was done. 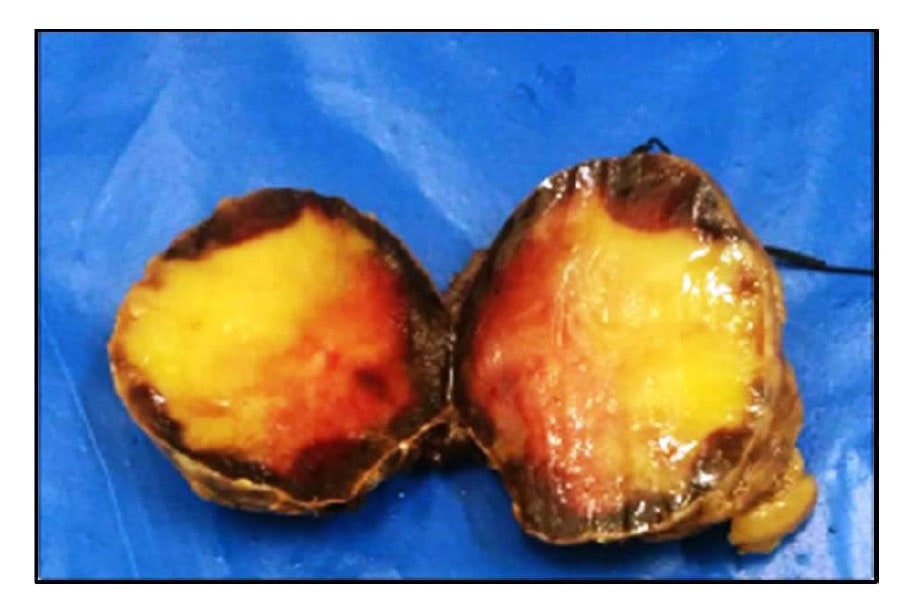 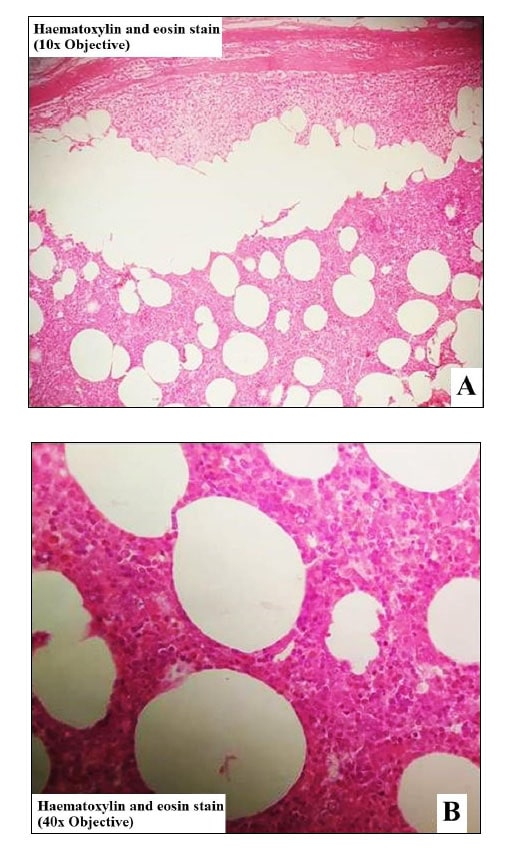 Figure 2 Histopathological features of the resected adrenal tumour [haematoxylin and eosin (H&E) stain]. The tumour was encapsulated by fibrous tissue. The adrenal cortical parenchyma was compressed at the periphery of the tumour (A, x100). This adrenal mass was composed of lobules of mature adipocytes along with intervening haematopoietic elements (B, x400).

Adrenal myelolipoma is an uncommon benign tumour of the adrenal gland, usually presenting as unilateral adrenal masses(1,2). These tumours are composed of mature adipose tissue admixed with haematopoietic cells(3). Adrenocortical cell metaplasia in response to stimuli such as inflammation, infection or stress had been considered as one of the described mechanism for the pathogenesis of this entity(4). Conditions such as Cushing's disease, obesity, hypertension and diabetes are often found to be associated with adrenal myelolipomas. It has also been proposed that these factors also play a role in development of this lesion(5).

Imaging techniques - ultrasonography, CT and MRI are effective in diagnosing adrenal myelolipoma. In cases of large size of the tumour in CT, the differential diagnoses of benign lesions (i.e. renal angiomyolipoma, retroperitoneal lipoma and adrenal teratoma) and malignancies (i.e. liposarcoma and adrenocortical carcinoma) also need to be considered as these lesions are fat containing. In such cases where the diagnosis is not possible using radiologic imaging modalities, fine needle aspiration cytology (FNAC) can be performed(3). The presence of a lipomatous tumour or any atypical cell can be ruled out with FNAC. However, in the present case, FNAC was not required as suspicious features of malignancy were not noted radiologically.

A thorough pathological evaluation - gross and microscopic examinations plays an important role in making a definite diagnosis and also to exclude malignancy. Serial sections of the tumour 1 cm apart is required for proper examination of the tumour so that malignancy is not missed(3). Management of this lesion is based on size of the tumour and also on whether the tumour is symptomatic or not. Conservative treatment is advised in tumours less than 4 cm in size. Surgery is advised in symptomatic tumour or rapidly growing tumours. Tumours greater than 6 cm in size also require surgical resection in order to avoid symptoms such as abdominal pain(2) as seen in our case. There are reports of spontaneous rupture and haemorrhage of the lesion causing cardiovascular shock(6). Hence, proper treatment plan is important.

Adrenal myelolipomas are rare clinically silent benign tumours. Careful and thorough histological assessment of the tumour is important for diagnostic confirmation and excluding malignancy. The treatment should be cautiously planned in order to avoid life threatening complications such as cardiovascular shock which may occur due to spontaneous rupture of the tumour.