Myoepithelial carcinoma, also known as malignant myoepithelioma, is mainly encountered in the salivary glands and, at a lower incidence, in the sweat glands (skin), breast, soft tissue, bone and very rarely in the lung. Pulmonary myoepithelial carcinoma was first described by Higashiyama et al. in 1998, and to the best of our knowledge, only 15 cases have been reported in the English literature so far. The reports are that of 13 adults and 2 paediatric cases. Herein we report a case of a matrix producing clear cell primary pulmonary myoepithelial carcinoma in a 64-year-old male patient who presented with chronic cough and respiratory distress. The characteristic histomorphological and the immunohistochemical features of the tumour were used to further discuss the distinct clinicopathologic features, differential diagnosis, treatment and prognosis of the entity. 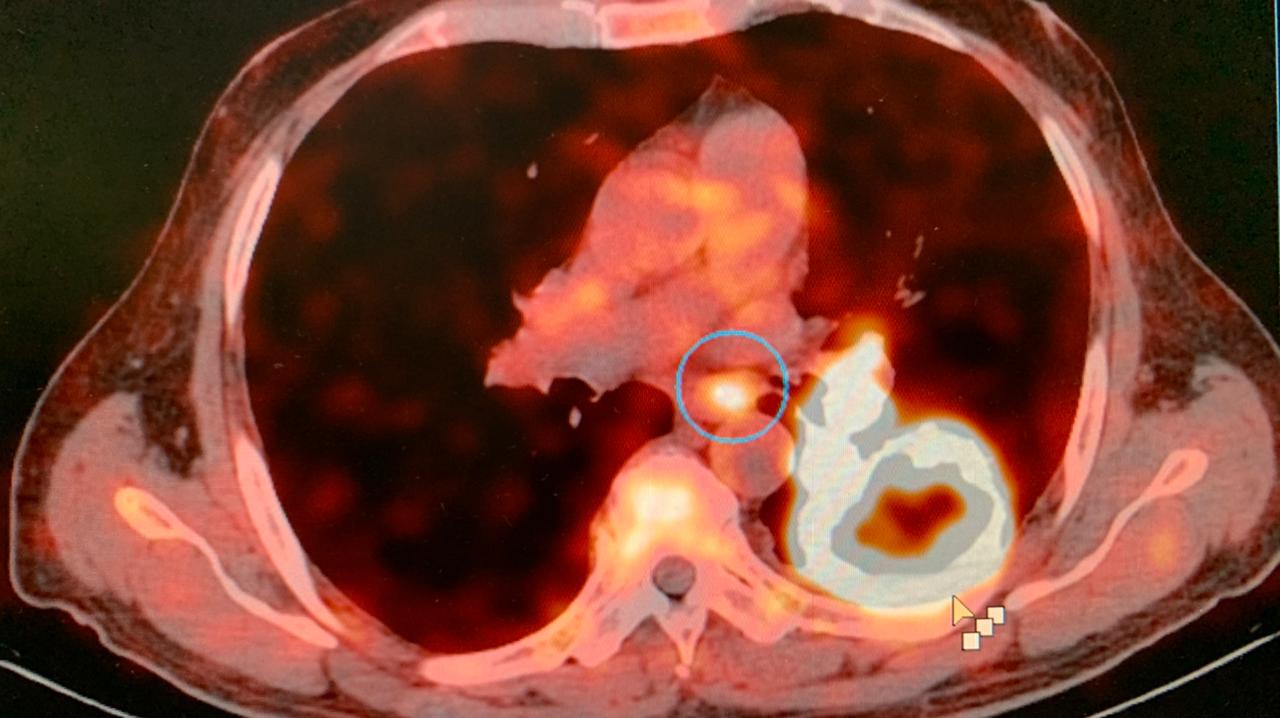 Figure 1 Positron emission tomography – computed tomography (PET-CT) of the chest. There was abnormally increased tracer uptake in enhancing peripheral areas of a thick-walled cavitary lesion in the superior segment of the lower lobe of the left lung, extending to the hilum (white arrow) and metabolically active discrete mediastinal lymph nodes (blue circle).

Immunohistochemistry showed diffusely strong positivity for p63 (Figure 5) and moderate positivity for S100 (Figure 6). There was negative immunoexpression for CD10, CD117, CK7, HMB-45, synaptophysin and TTF1. With the above histomorphological and immunohistochemical features, the diagnosis of primary myoepithelial carcinoma of the lung, clear cell type was given. Due to poor health conditions, surgery was not done, and the patient was put on chemotherapy. For 9 months, the patient shows no progression of the disease and is alive with the disease. 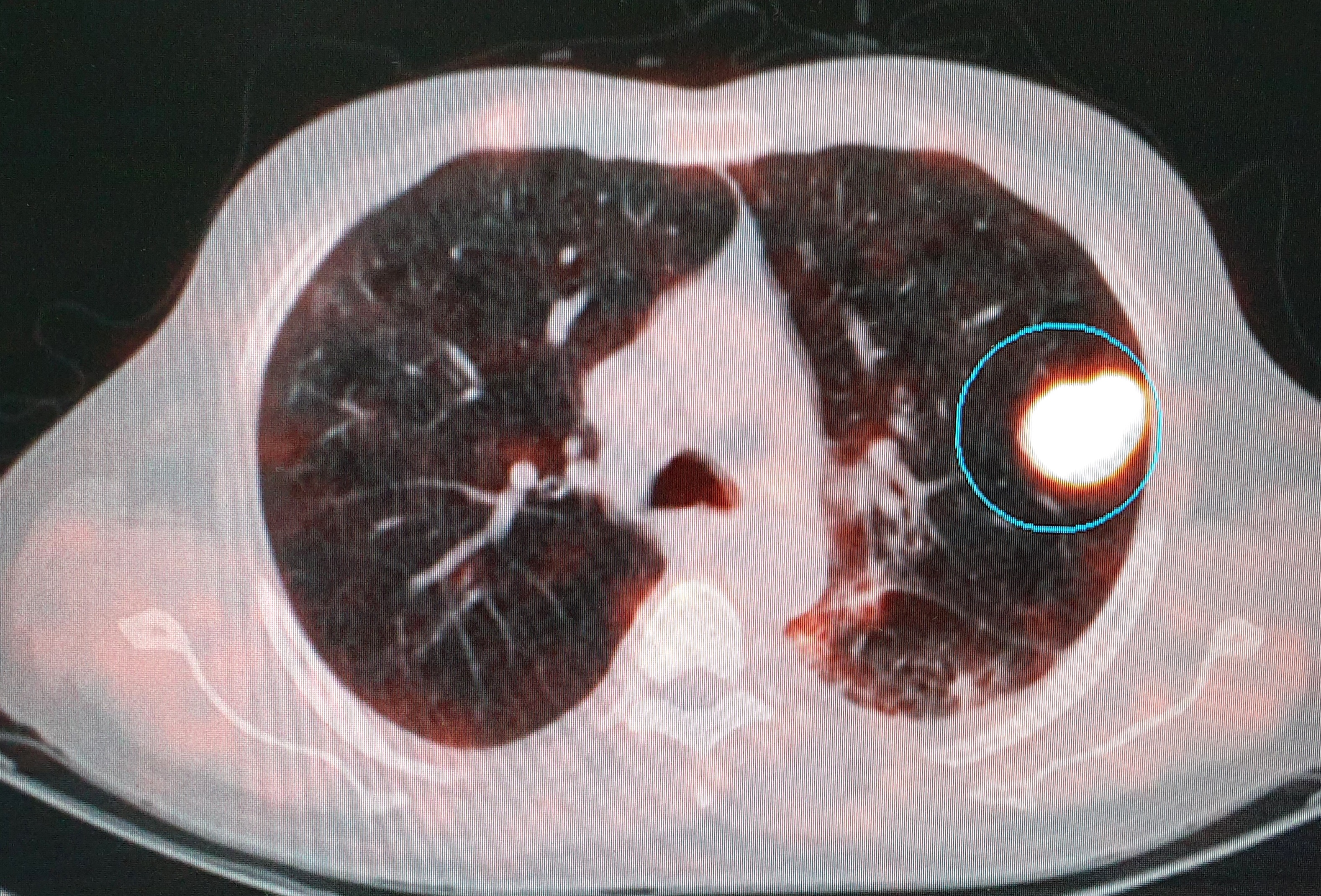 Figure 2 Positron emission tomography – computed tomography (PET-CT) of the chest. There was nodular soft tissue density lesion with lobulated margins in the anterior segment of the upper lobe of the left lung (blue circle). 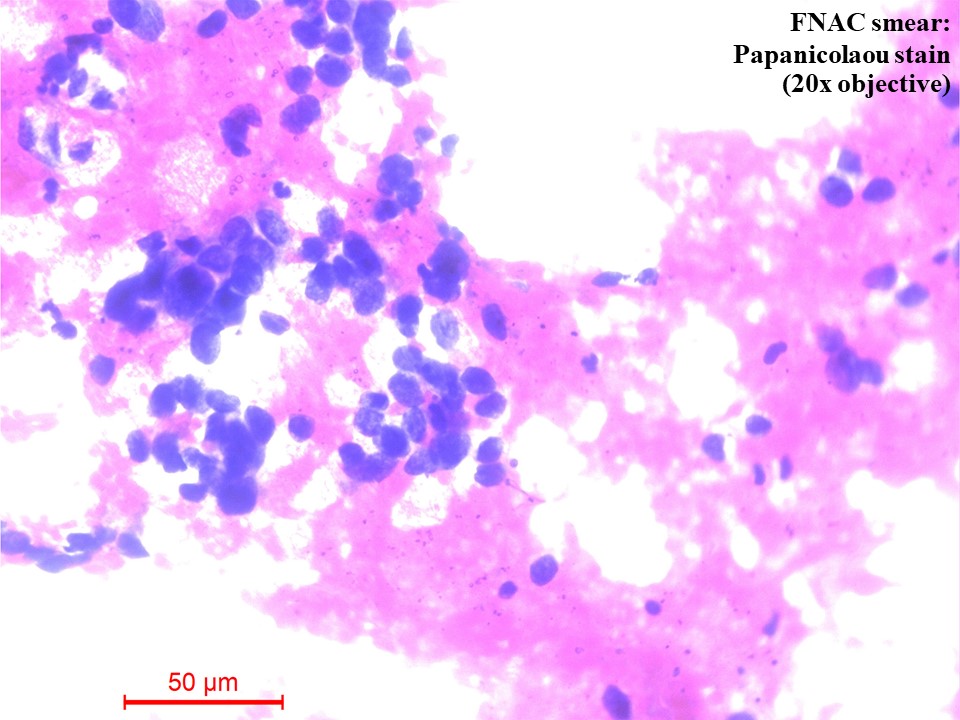 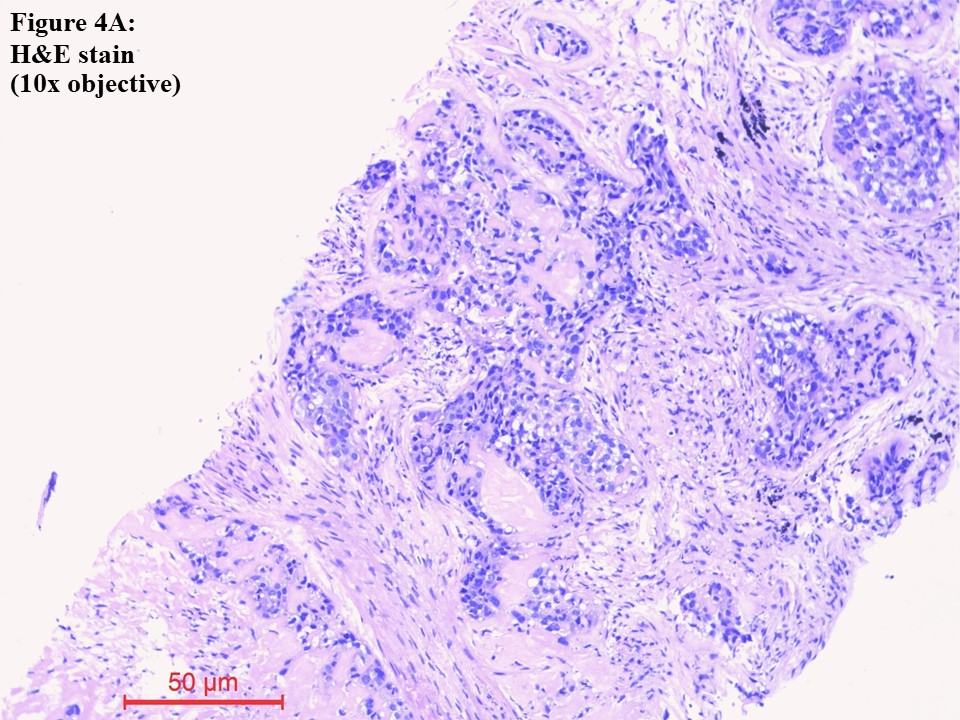 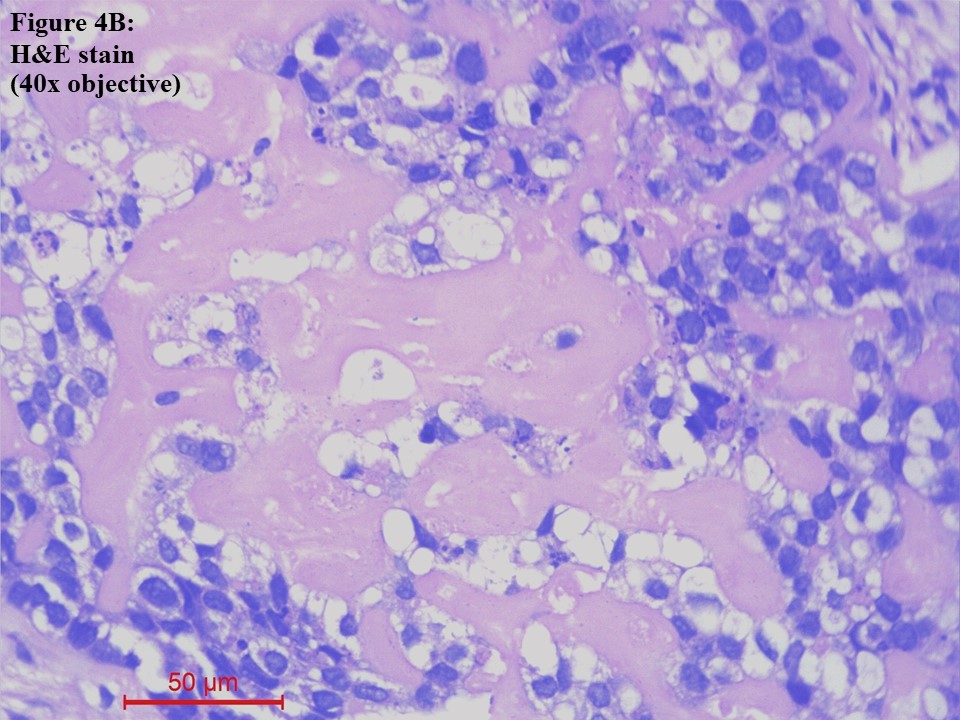 Figure 4 Lung tissue obtained from Tru-Cut biopsy [haematoxylin and eosin (H&E) stain]. (A). The lung tissue was infiltrated by a neoplasm arranged as cords, nests and fused glands in blobs of an acellular pale eosinophilic matrix (10x objective). (B). The cells had moderately pleomorphic hyperchromatic nuclei and a moderate amount of pale eosinophilic to clear cytoplasm (40x objective). 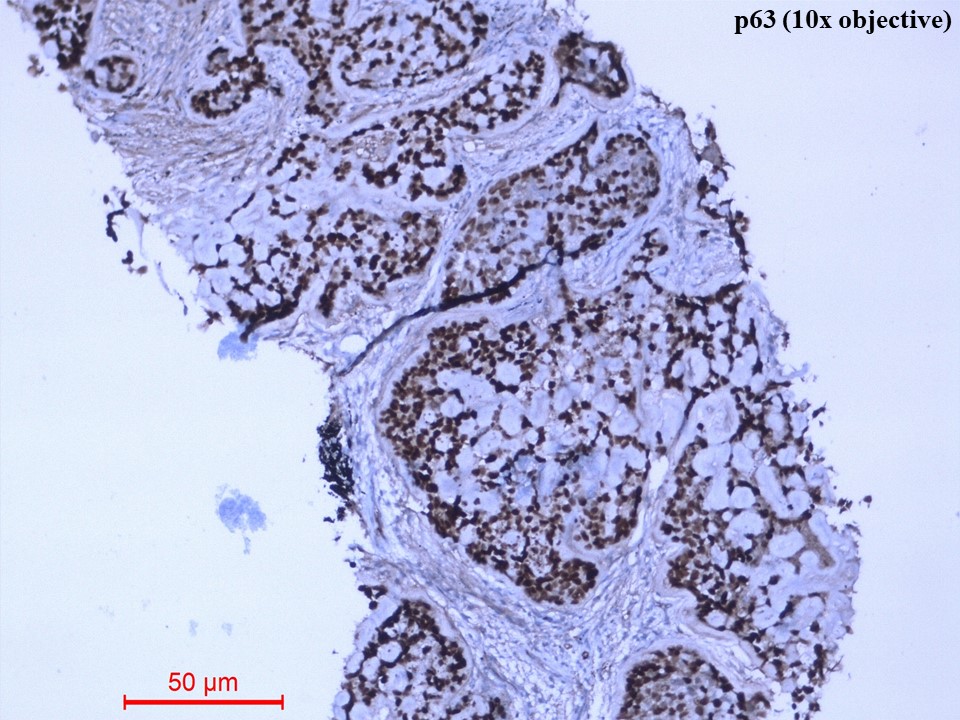 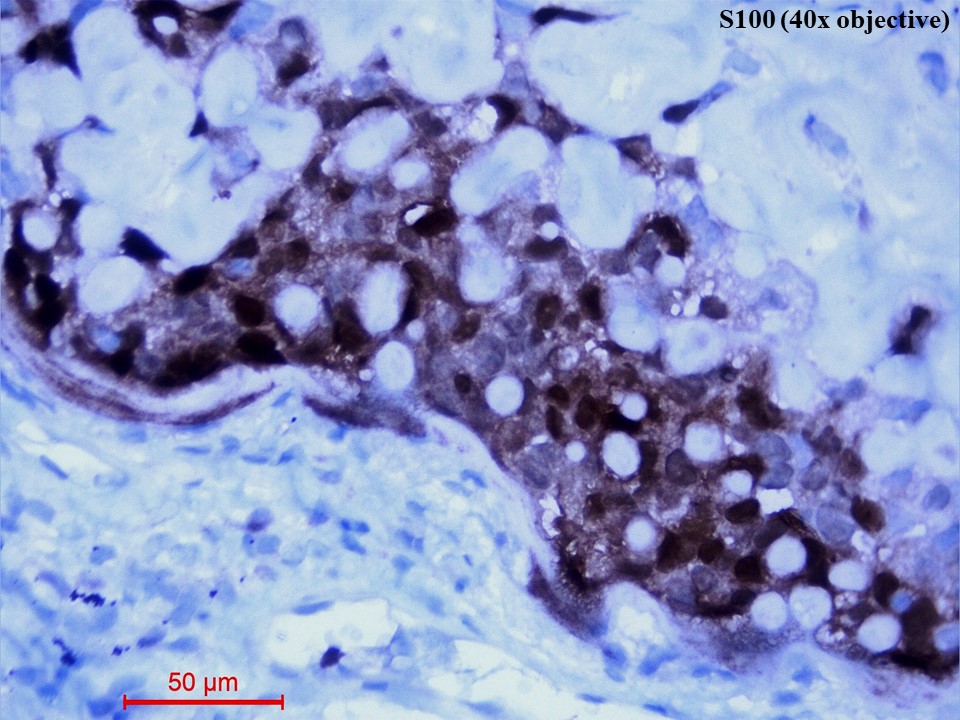 To the best of our knowledge, only 15 cases of primary pulmonary myoepithelial carcinoma have been reported in the English literature(9). The clinical data of these reported cases are shown in the Table. Adult cases range in age from 24 to 76 years old (mean age of 55.5 years) and paediatric cases are that of 7- and 13-year-old girls. The male-to-female ratio is 7:8. Six out of 16 cases have a history of smoking. Five cases presented as endobronchial mass and 11 cases had peripheral mass. Except 2 cases, all underwent resection. Six cases had metastasis. One case had a recurrence. Seven cases were alive without disease. Five cases were alive with disease. Two cases died of the disease. One case died due to other cause. However, two cases had unavailable follow-up data. 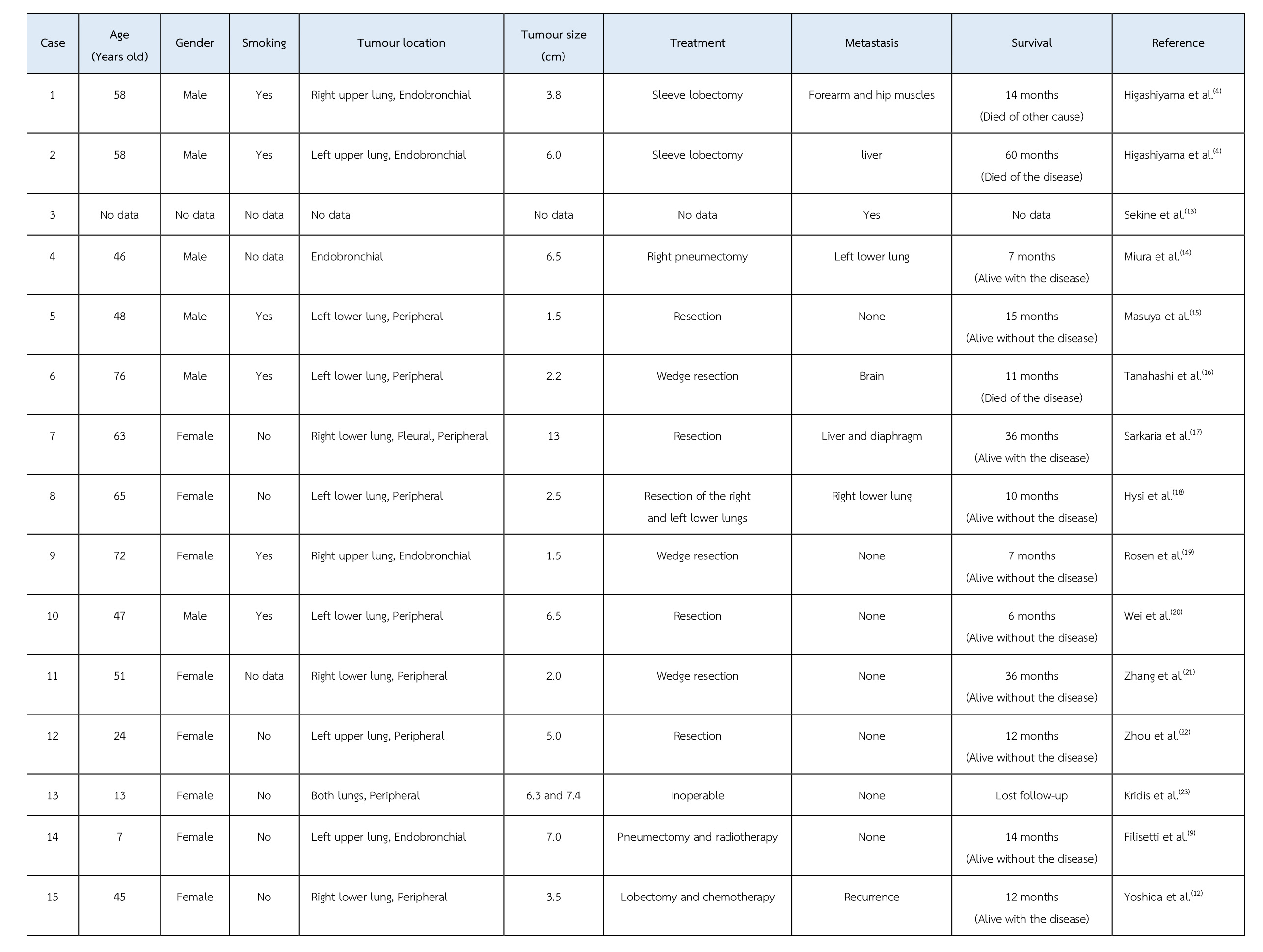 Myoepithelial carcinoma in the lung presents as either an endobronchial mass or a peripheral mass. The tumour develops from both the central and the peripheral bronchial glands. Grossly, the tumour is usually well-circumscribed, ranging from 1.5 to 20 cm, with a yellow-tan, sometimes glistering cut surface(6,10). Myoepithelial carcinoma is a malignant tumour that is entirely composed of myoepithelial cells with variable cellular morphologies, including spindle (most common), epithelioid, plasmacytoid, or clear cells (least common) along with a variable stromal component. It can be differentiated from myoepithelioma by the following criteria, i.e nuclear atypia, multinucleation, prominent nucleoli, high mitotic rate (an average of 13 mitoses per 10 HPFs) and necrosis. The tumour cells express epithelial markers (EMA and pan-CK) and at least one myoepithelial marker [caldesmon, calponin, glial fibrillary acid protein (GFAP), p40/p63, S100 and smooth muscle actin (SMA)](10). They will be negative immunostainings for CK7 (showing the absence of epithelial/glandular differentiation) and TTF1(6).

Frequent EWSR1 and FUS rearrangements(11) and case reports with SMARCB1 loss(12) are also seen. It is seen that specific histomorphological findings can be related to specific gene fusion products. Tumours with EWSR-PBX1 fusion were characterised by spindle cell proliferation with clear cytoplasm, while EWSR-ZNF444 translocation is seen in the epithelioid type of tumour cells. In a few cases with clear cell morphology, no specific fusion partners for EWSR were detected(11). SMARCB1 loss is found in the case with rhabdoid morphology(12).

Treatment for myoepithelial carcinoma is surgical resection. Unfavourable cases are also treated with chemotherapy and radiotherapy(12). Since the reported cases on this entity are very few, the knowledge regarding treatment is also limited. This tumour can metastasise to brain, contralateral lung, liver and soft tissue. A lower mitotic count is a favourable prognostic factor of clinical outcome and survival in primary myoepithelial carcinoma of the lung(6).

This tumour consists of round or oval clear cells with abundant glycogen containing cytoplasm, which shows strong diastase-sensitive PAS positivity. Nucleoli may be prominent. Stroma is scanty with prominent thin-walled sinusoidal vessels. Mitosis and necrosis are extremely rare. Malignancy should be suspected if the tumour is infiltrative or shows significant mitotic activity. Immunohistochemistry shows positive for HMB-45 and S100. There is negative immunoexpression for pan-cytokeratin cocktail AE1/AE3, CK7, CK20 and p63/p40(24).

These tumours are of salivary gland origin. The tumour cells form sheets, nests, and cords. No definite glandular formation is seen. Stroma has thick parallel strands of fibrous tissue associated with the hyalinised and myxoid substance. Cells are polygonal to round with abundant pale eosinophilic to clear cytoplasm, bland nuclei with fine chromatin, small or inconspicuous nucleoli(25). Some cells show intranuclear pseudoinclusions, usually no necrosis, nuclear pleomorphism, or increase in mitosis. The periphery of the tumour shows chronic inflammatory infiltrate. Immunohistochemistry shows positivity for pan-keratin, CK7 and p63. Cells are negative for CD10, CK20, chromogranin, synaptophysin, HMB-45, napsin A, PAX-8 and TTF-1, and consistently negative for the myoepithelial markers like S-100, SMA and calponin. Molecular testing shows EWSR1-ATF1 fusion, which is also seen in clear cell sarcoma of soft tissue and angiomatoid fibrous histiocytoma(26).

Squamous cell carcinomas are tumours characterised by keratinisation and/or intercellular bridges. They arise from bronchial epithelial cells through squamous metaplasia/dysplasia. The 2004 WHO classification had 4 variants of squamous cell carcinoma, i.e. clear cell, small cell, papillary and basaloid(28). The 2015 WHO classification had no longer recommendation on this classification(10).  Clear cell is considered to be more of a cellular change than a pattern and can occur in all histological categories of squamous cells. Immunohistochemistry shows positivity for CK5/6, p40 and p63, and negative for calponin, CK7, CK20, other myoepithelial markers like S100, SMA and TTF1(28).

This tumour reveals specific histomorphology and immunohistochemical markers for their cells of origin(12).

In conclusion, clear cells and matrix-producing lung tumours should raise the suspicion of myoepithelial carcinoma. Since the available data regarding this rare entity is very minimum, big data case studies have to be undertaken for better treatment modalities and outcome of the disease.