Sclerosing Polycystic Adenosis of the Parotid Gland: Report of A Case with Multifocality

Sclerosing polycystic adenosis (SPA) is a rare tumor-like lesion of the salivary gland that bears a histomor-phological resemblance to fibrocystic disease and sclerosing adenosis of the breast. The lesion is widely considered to be a pseudoneoplastic inflammatory process. However, foci of epithelial dysplasia and carcinoma in situ can occur in the lesion. We report a case of 16-year-old Thai female with multifocality of SPA arising in the right parotid gland. Grossly, the masses were well-circumscribed, firm, and whitish yellow discoloration with scattered small cysts. Microscopic examination revealed partially encapsulated masses composed of multiple irregular lobules containing cystically dilated ducts and foci of ductal and acinar proliferation embedded in sclerotic collagenous stroma. There were multiple foci of intraductal epithelial hyperplasia with focal cytological atypia. Immunohistochemical staining for calponin and smooth muscle actin demonstrated intact myoepithelial layer around each ducts and acini, which was an important clue in diagnosis this lesion.

Sclerosing polycystic adenosis (SPA) is a rare tumor-like lesion of the salivary gland that bears a histomorphological resemblance to fibrocystic disease and sclerosing adenosis of the breast. This entity was first described by Smith et al. in 1996. They published a case series of 9 patients from the Armed Forces Institute of Pathology [1]. The etiology, pathogenesis and true nature of SPA are still controversial. Even though the lesion has been widely considered to be a pseudoneoplastic inflammatory process, the debate that it may represent a neoplastic process was raised, particularly after Skalova et al. had succeeded in demonstrating monoclonality of SPA by using a Human Androgen Receptor (HU-MARA) Iocus as a marker [2]. To the best of our knowledge, there have been about 60 cases of SPA published in the international literature [1-23] after the first report. The large majority of cases occurred in the parotid glands and the remainder arose in the submandibular and minor salivary glands [3, 4]. A peak incidence was in the fifth decade of life [3, 4]. Females were affected more frequently than males [1, 4, 5]. The patients typically presented with slow-growing masses in the salivary glands, which were usually solitary, but possibly multiple or co-exist with other benign salivary tumors [3]. However, synchronous bilateral involvement has not yet been reported.

Here, we report a case of a 16-year-old female with multiple SPA in the parotid gland.

A 16-year-old Thai female came to hospital with a problem of recurrent enlarged right parotid gland of 3 years’ duration. Four years prior to this admission, she had undergone superficial parotidectomy because of the painless enlarged right parotid gland. At that time the pathological diagnosis was chronic sialadenitis. One year after surgery, she had a mass about 1 cm in diameter at the same site without any symptoms. The lesion gradually enlarged during the period of 3 years and prompted her to see the doctor. The physical examination revealed three separated masses occurring in the right parotid gland. Excisional biopsy of all masses was performed. The specimens were submitted for histopathological examination, and consisted of three well circumscribed, firm, whitish yellow masses measuring 3.8x3x3 cm, 3.3x2.8x2.5 cm and 2.8x2x1.8 cm. Cut surfaces of the masses showed well circumscribed, firm, whitish yellow tissue with scattered tiny cysts ranging from 0.1-0.2 cm in diameters (Fig.l). 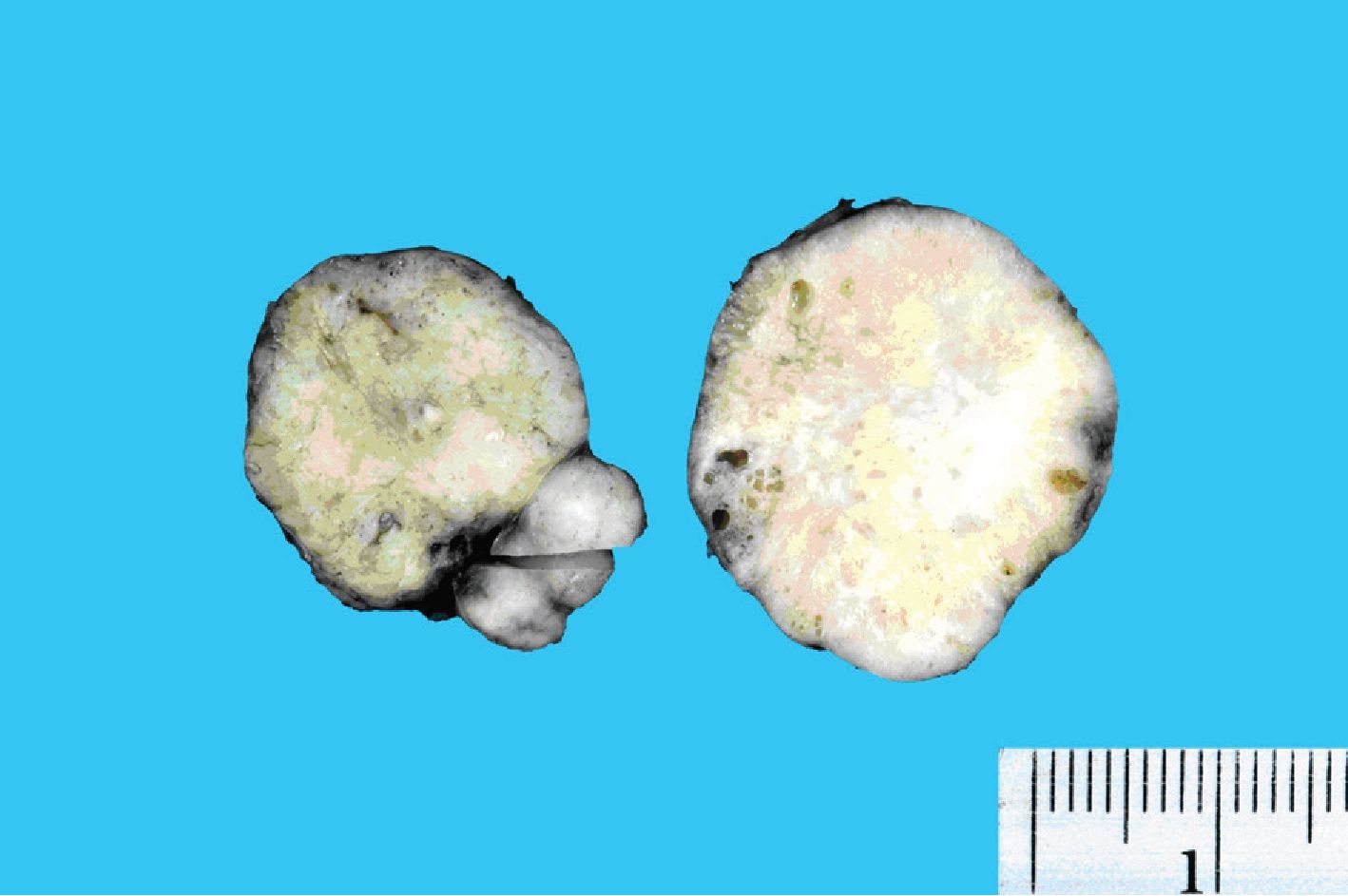 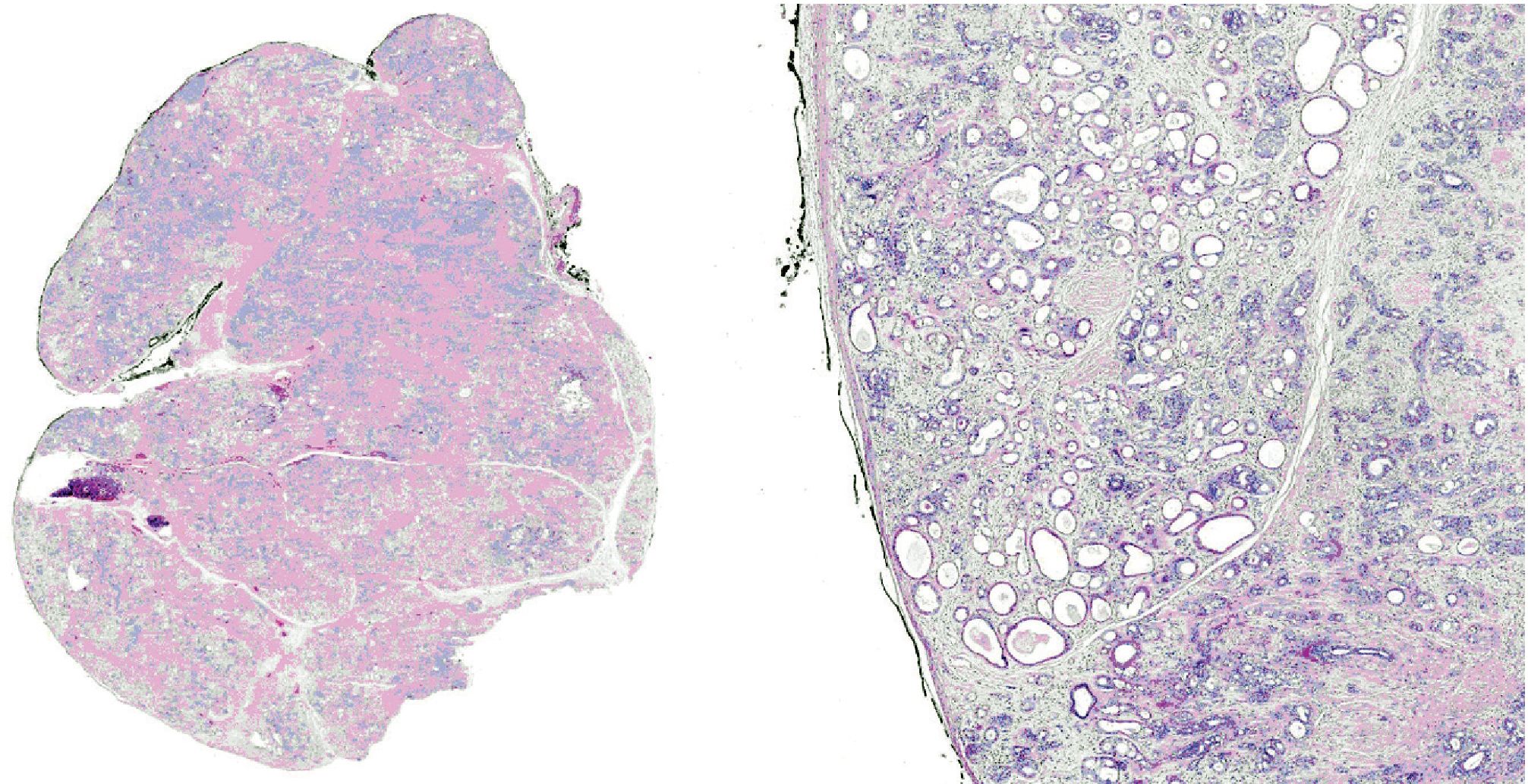 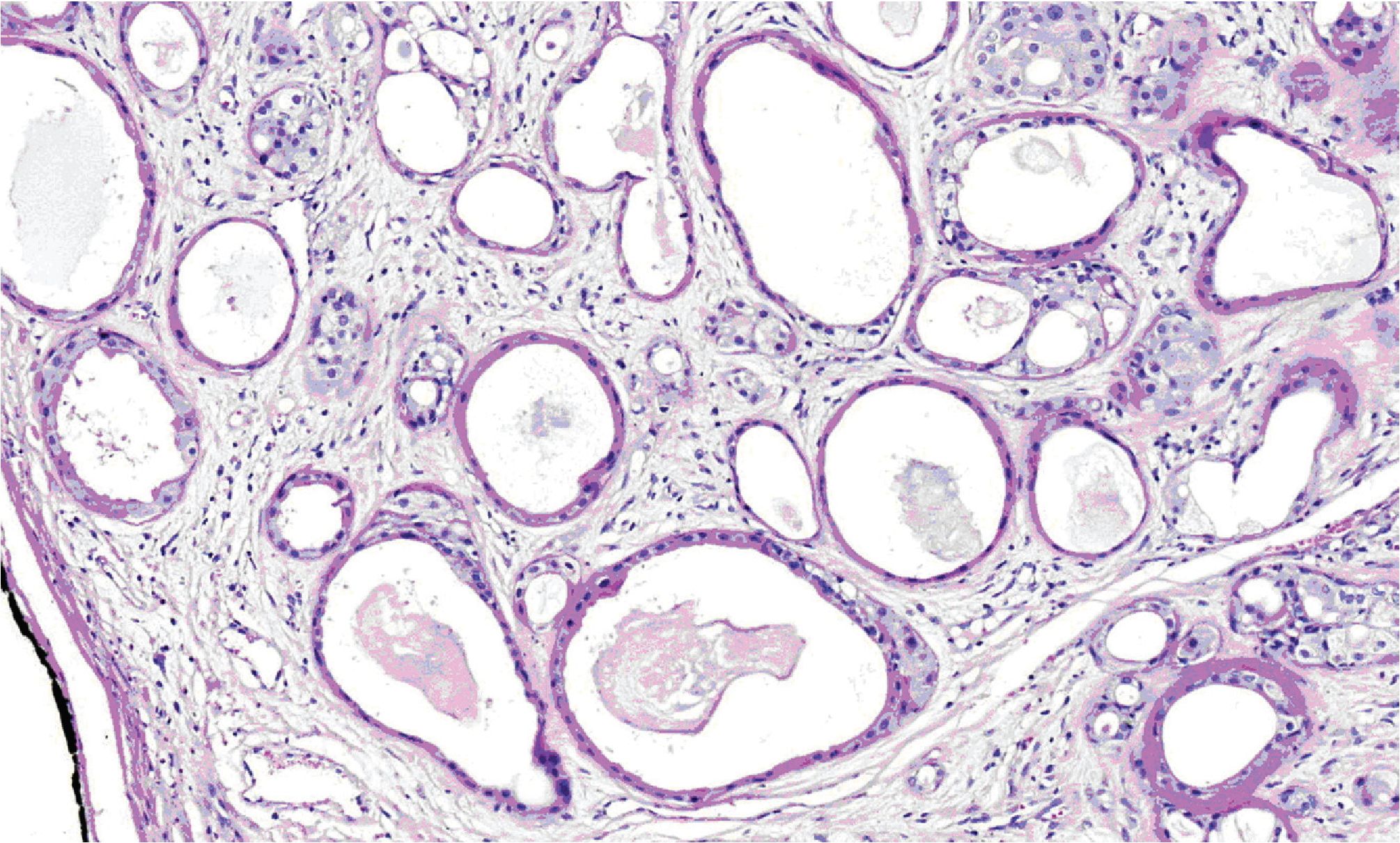 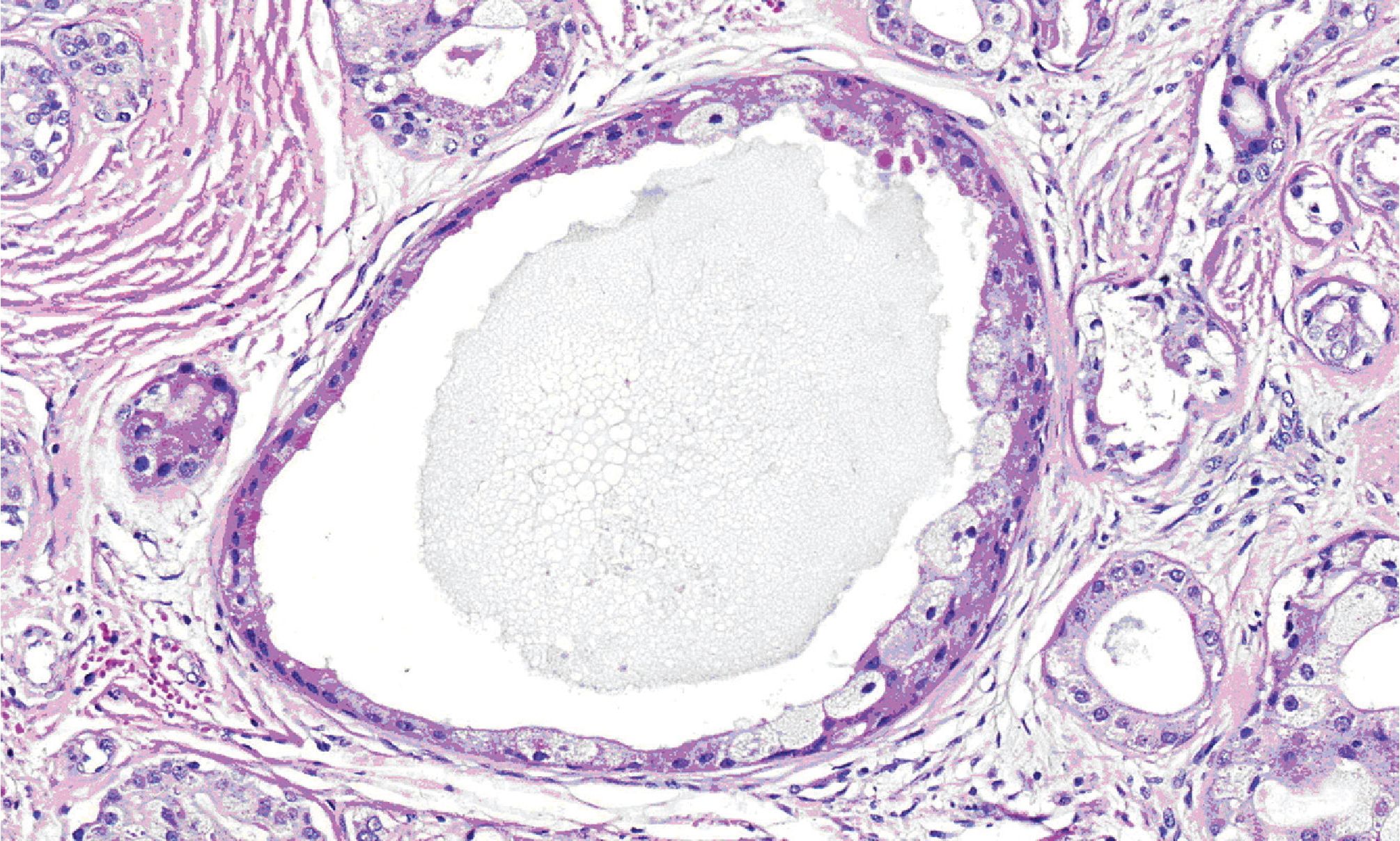 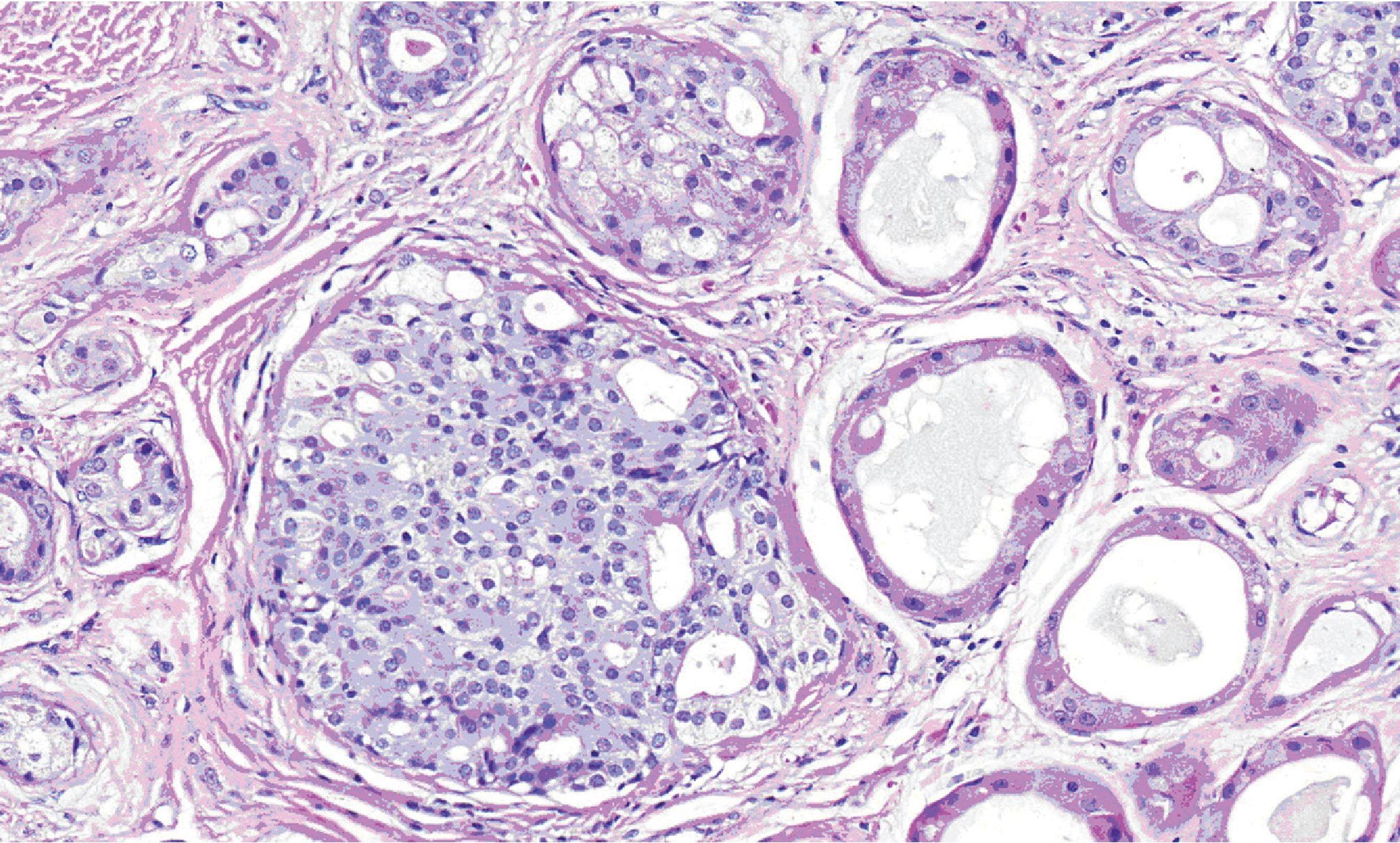 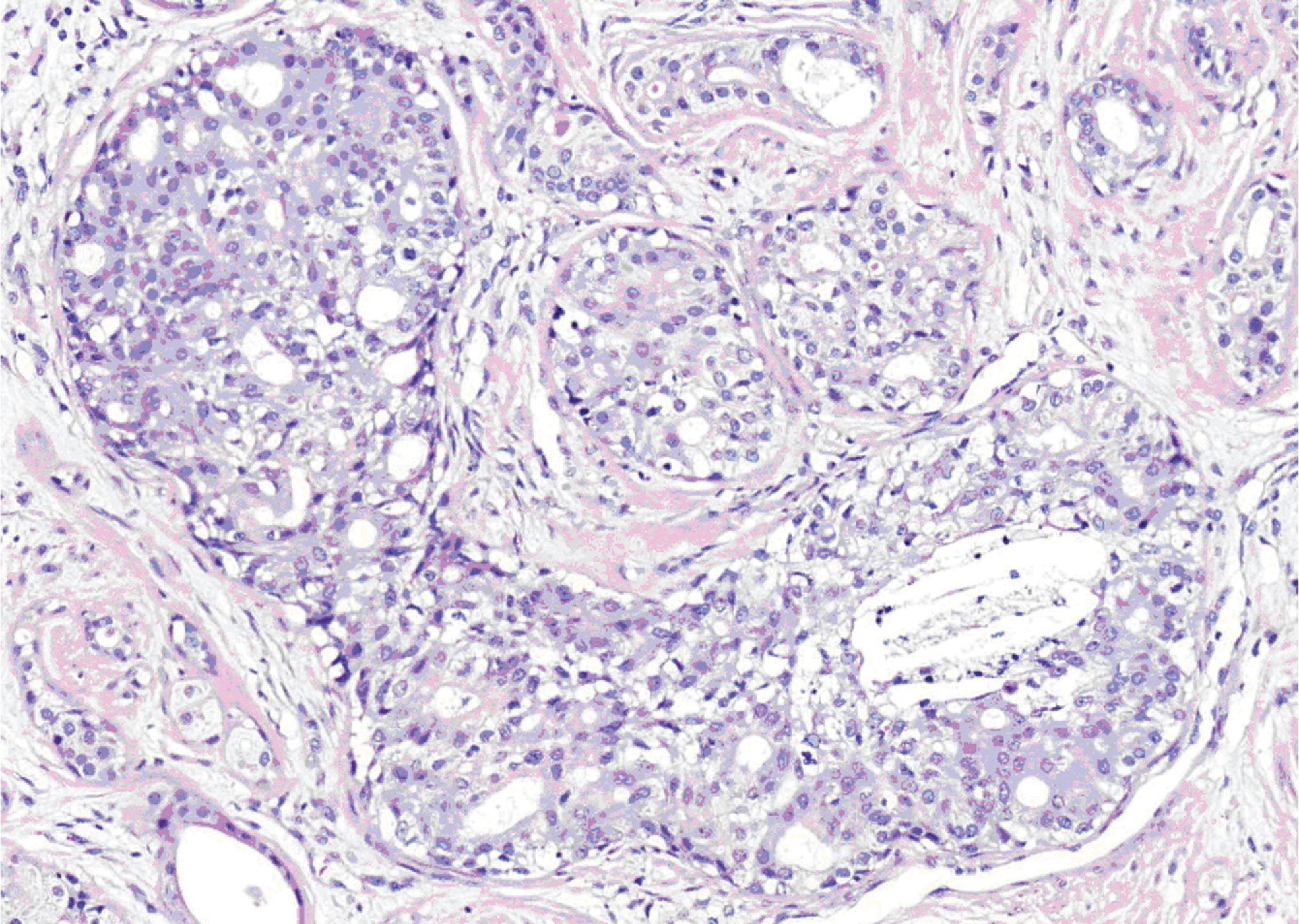 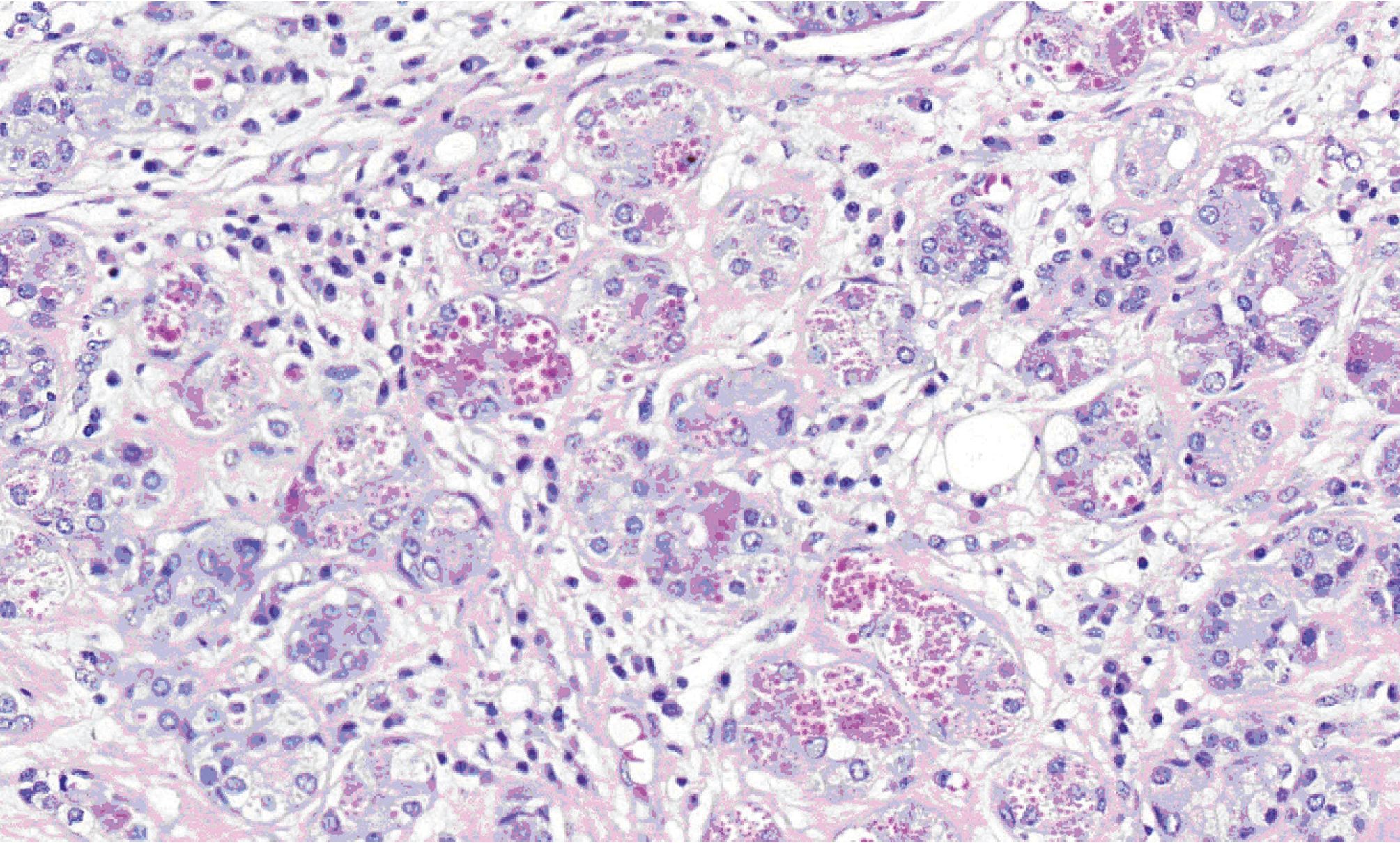 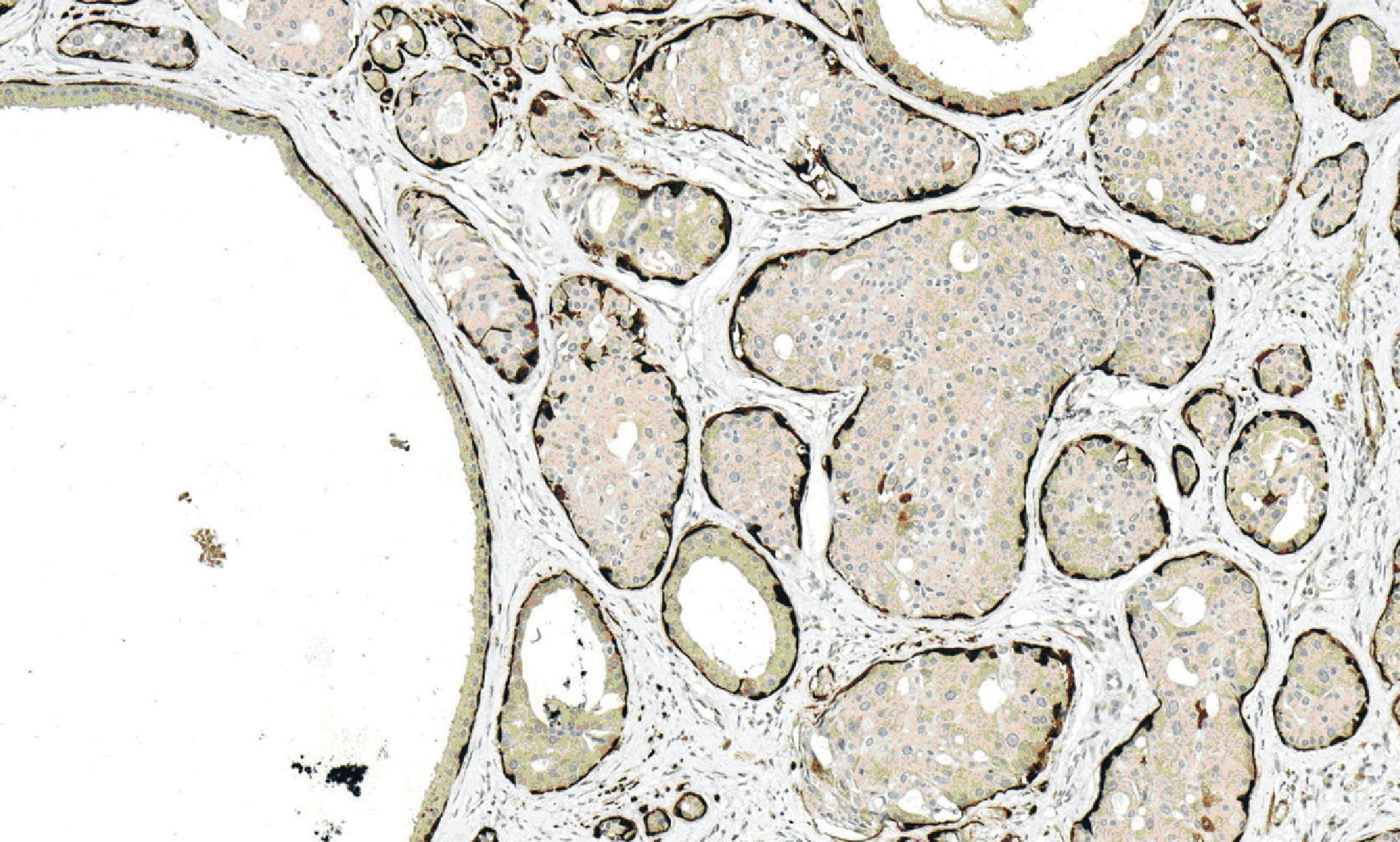 In 1996, Smith et al. first described and named the term “Sclerosing polycystic adenosis (SPA)” for a distinct tumor-like lesion of the major salivary glands. They reported a case series of 9 patients presented with slow-growing masses in the parotid (8 cases) and submandibular glands (1 case) from the Armed Forces Institute of Pathology [1]. In 2006, Gnepp et al. reported the largest series of SPA with a total of 16 cases including the first case of minor salivary gland origin [3]. Up-to-date, there should be 64 cases in the international literature if include our case [1-23]. Based on the clinical features of these reported cases, the patients have a wide range of ages from 9 - 84 years with a peak incidence during the fifth decade of life [3, 6]. The mean age of diagnosis by our review is 45 years. Female is preponderance (37cases of female and 27 cases of male). Size of the lesions ranges from 0.3 - 11.8 cm [3, 24]. The parotid gland is the most common location (76.56%) followed by submandibular (7.81%) and minor salivary glands (15.63%). The latter sites include buccal mucosa (3 cases), palate (2 cases), retromolar region (2 cases), and nasal septum (1 case) [3, 7, 8, 9]. One case of minor salivary gland origin did not describe a specific site in the oral cavity [10].

Those developing in the major salivary glands typically present with slow- growing mass with or without associated pain. The lesions are usually solitary, but multiple lesions or synchronous association with other benign salivary tumors (pleomorphic adenoma, oncocytoma, Warthin’s tumor, and combined sebaceous lymphadenoma-Warthin’s tumor) can occur [3, 11].

Grossly, SPA is well-circumscribed, firm or rubbery mass with scattered multiple small cysts surrounded by normal salivary gland parenchyma. The lesion can vary in color ranging from white-tan to yellow-white.

Microscopically, the lesion is unencapsulated or partially encapsulated and consists of multiple irregular lobules containing proliferation of ducts and acini in a background of densely fibrotic stroma. The ductal component frequently demonstrates cystically dilated with flattened to cuboidal cells lining. The ductal cells often develop metaplastic change into a variety of cell types including vacuolated, apocrine, foamy, mucous, squamous and sebaceous-like cells. The acinar cells usually contain abundant coarse eosinophilic granules, which are positive for PAS staining and resistant to diastase enzyme. Intraductal epithelial proliferation can occur ranging from minimal to florid hyperplasia forming a solid or cribriform growth pattern. These proliferating epithelial cells can develop variable degree of dysplastic change ranging from mild dysplasia to carcinoma in situ [12, 13, 20]. In addition, atypical hyperplasia of acinic cells may present, which can be mistaken for acinic cell carcinoma. However, lobular architectures of these atypical ducts and acini are preserved. Up-to- date, there has not been a report of invasive carcinoma arising in SPA.

In our present case, we found multiple foci of florid intraductal epithelial hyperplasia. Some of them showed mild cytologic atypia. However, severe dysplastic change that fulfilled the histopathologic criteria for the diagnosis of carcinoma in situ is not observed.

Immunohistochemically, almost entire ductal and acinar structures are surrounded by myoepithelial cell layer, which is immunoreactive with calponin, smooth muscle actin, P63, S-100, and glial fibrillary acidic protein [12, 25]. The ductal and acinar cells are positive for cytokeratin, but negative for CEA, p53, and HER-2/neu. EMA, s-100, and antimitochondrial antibody variably express in ductal cells, while acinar cells with coarse eosinophilic granules react for GCDFP-15 [12, 25]. Estrogen and progesterone receptors positivity have been studied and showed varying results of reactivity [2, 12, 13].

The etiology and pathogenesis of SPA are controversial, initially point to the reactive postinflammatory process. However, regarding the presence of epithelial dysplasia and carcinoma in situ, together with the demonstration of monoclonal-ity of SPA by Skalova et al. [2], there was a debate as to whether SPA represented a neoplastic process. In 2010, Swelam et al. were the first group that found the evidence of EBV viruses in SPA and postulated the role of EBV in the pathogenesis of the lesion [8]. However, the study was limited by the small number of cases (total 3 cases). Despite, their finding of EBV viruses in SPA, there has been no other report that supports their hypothesis.

The treatment of choice for SPA is adequate surgical excision. Although about 30% of the followup cases have recurred, it was generally considered to be the result of inadequate excision or multifo-cality of the lesion than the true recurrence. In our present case, since the patient underwent superficial parotidectomy before mutifocal lesions of SPA developed. Unfortunately, we did not have chance to review the previous specimen. However, we believe that we are coping with the recurrent lesion.

In summary, sclerosing polycystic adenosis is an uncommon tumor-like lesion of the salivary glands with a benign behavior. However, clinically and histologically may be mistaken diagnosed as malignant neoplasm.

25. Gnepp DR. Sclerosing polycystic adenosis of the salivary gland: a lesion that may be associated with dysplasia and carcinoma in situ [Commentary]. Adv Anat Pathol 2003; 10: 218-222.