Primary sinonasal mucosal melanoma is a rare neoplasm. Like in other sites of malignant melanoma, the histopathology is variable and when lacking of melanin pigment, particularly in small biopsy specimen mimicks many neoplasms. Immunohistochemical staining plays an important role. Many immunomarkers, including S-100, HMB-45 and Melan-A should be included in a panel of immunohistochemistry to increase the sensitivity of detection of melanocytic differentiation, particularly in sinonasal region. Furthermore, expression of several aberrant immunophenotypic markers in malignant melanoma should be aware of in order to prevent misdiagnosis. This is an unusual case of sinonasal mucosal melanoma in a 50-year-old male, showing plasmacytoid appearance with CD138 expression. The tumor was also focally and weakly positive for S-100 immunostaining. These findings may lead to wrong diagnosis of plasma cell neoplasm.

Primary sinonasal mucosal melanomas are rare neoplasms compared with their cutaneous counterpart. They have variable histopathologic features, mimicking many neoplasms. Moreover, some malignant melanomas show absence of melanin pigment (amelanocytic melanoma) or contain minimal amounts of pigment that can hardly detected in biopsy specimen, causing more difficulty in diagnosis. Immunohistochemical staining plays an important role to help and confirm the diagnosis. However, interpretations should be done carefully due to limitation of sensitivity of melanocytic markers in addition to aberrant immunophenotypic expression of melanoma. This is a case report of an unusual nasal mucosal melanoma showing plasmacytoid morphology and aberrant CD138 expression.

A 50-year-old-male patient was referred to Ma-harat Nakhon Ratchasima Hospital due to left nasal mass. He had a history of intermittent fever, tenderness in the left nasal cavity with nasal obstruction and difficulty in breathing for 3 months. Two weeks later, he developed occasional episodes of epistaxis and nasal discharge. Neither loss of appetite nor weight was complained. Physical examination showed a large dark brown mass occluded the left nasal cavity. No enlarged lymph node was noted. The patient showed no skin lesion and had no past history of malignancy. The biopsy specimen of the nasal mass consisted of multiple pieces of grey brown and dark brown tissue, measuring 2.5x2.5x0.3 cm. in aggregate. H&E sections revealed numerous plasmacytoid tumor cells, possessing eccentric round nuclei with indistinct nucleoli and moderate amounts of eosinophilic cytoplasm, arranged in loosely cohesive sheets (figurel). Extensive necrosis and hemorrhage were seen but melanin pigment was not recognized. Equivocal spindle-shaped tumor cells were focally seen.. The initial panel of immu-nohistochemical stainings showed negative AE1/ AE3, bovine keratin , LCA, S-100, and diffusely positive vimentin and CD138 (figure2). Kappa and lambda immunostainings were performed later due to positive CD138 and both showed negative results. The case was revised and reinterpreted S-100 as focally positive and raised the suspicion of melanoma. HMB-45 was therefore requested and revealed diffuse positive staining (figure3). Malignant melanoma was entertained as final diagnosis. Further investigations included computed tomography (CT) and magnetic resonance imaging (MRI) and displayed a 3x6.2 cm. mass in the left nasal cavity extending to the left ethmoidal sinus with left maxillary and frontal & sphenoid sinuses without intracranial involvement. The patient underwent lateral rhinotomy with medial maxillectomy. Multiple pieces of light brown tissue, measuring 5x5x3.5 cm. in aggregate were sent for histological examination and tumor cells showed similar histologic and immunophenotypic features to those of previous biopsy. The diagnosis of malignant melanoma was still confirmed. 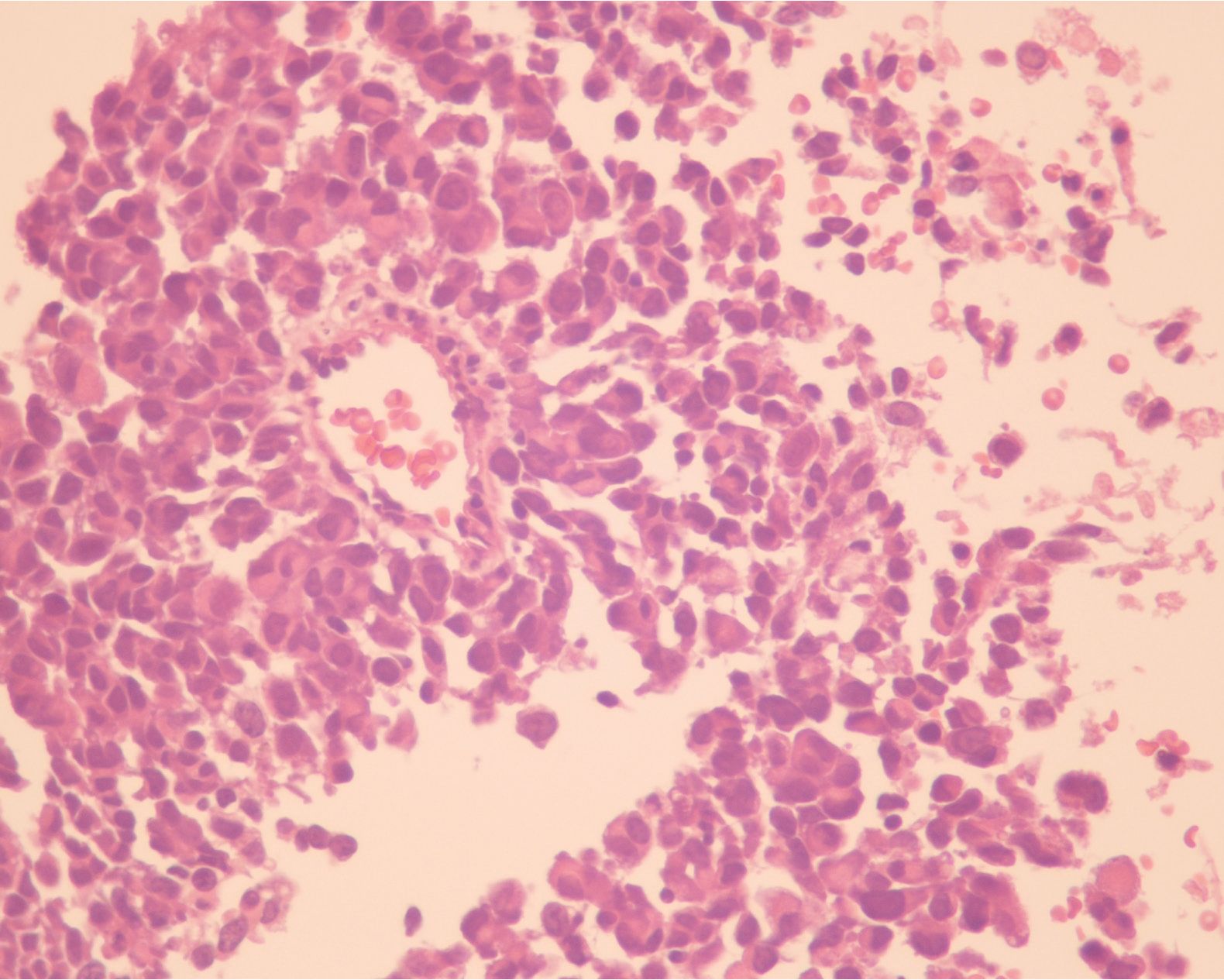 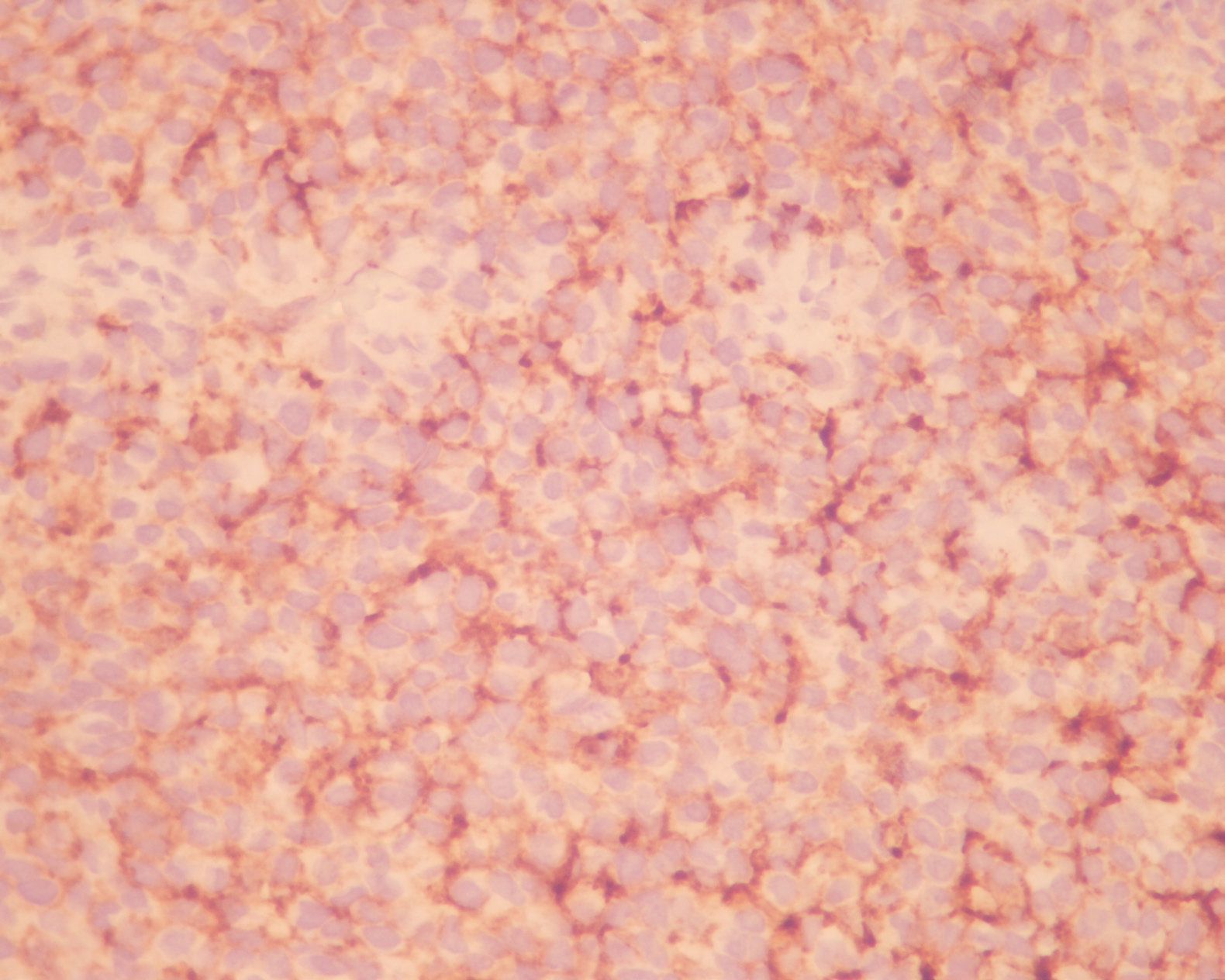 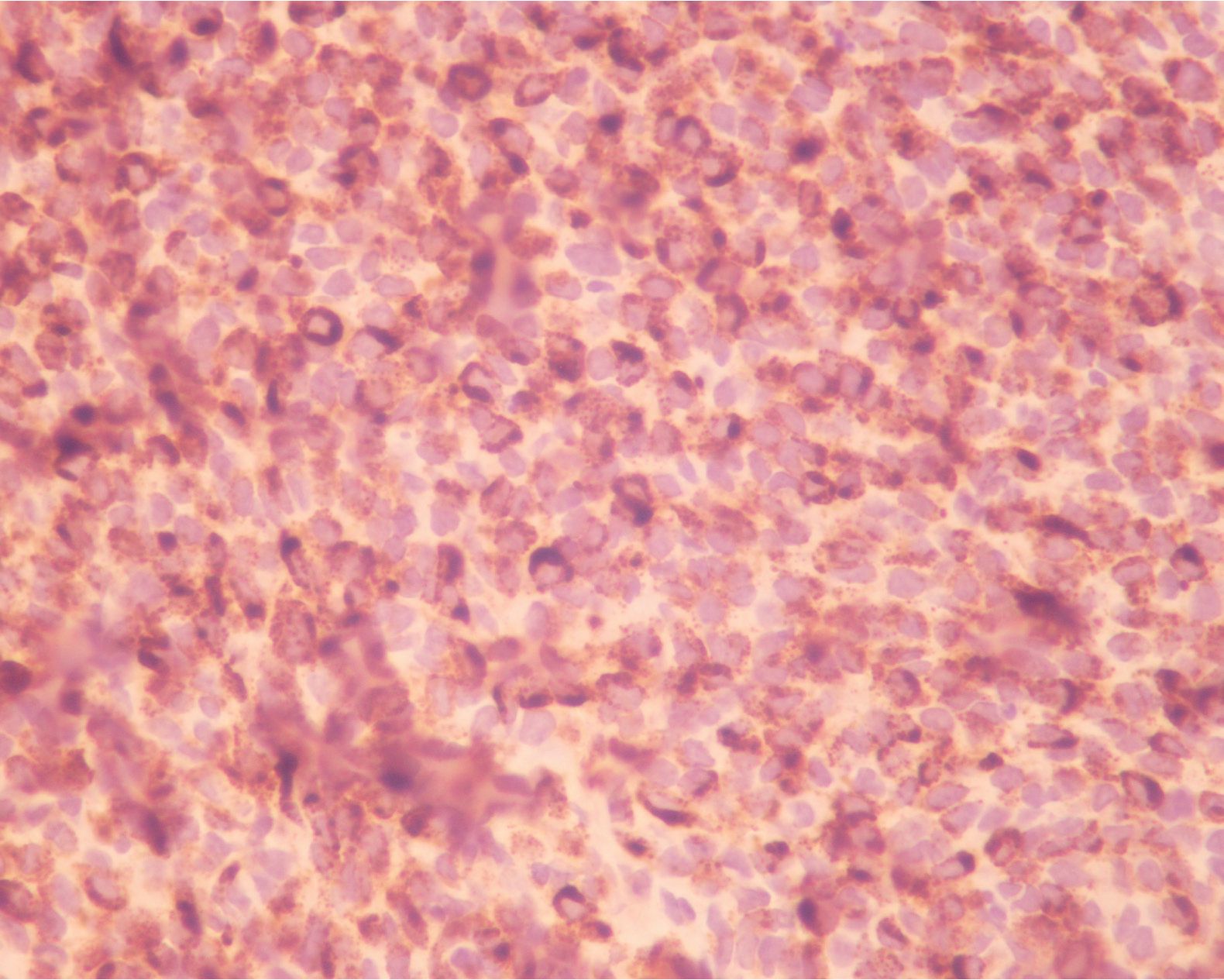 Figure 3 The tumor cells were diffusely and strongly immunoreactive with HMB45.

DISCUSSION AND REVIEW OF LITERATURES

Primary mucosal melanoma is a rare neoplasm accounting for 0.3-2% of all malignant melanomas (1-3). Head and neck region is the major site for mucosal melanoma(1,4-6). Sinonasal melanoma is considerably common and accounts for about 7% of all sinonasal neoplasms(6-9) Nasal cavity is the most common site(4-7) predominantly at the nasal septum(3-6,8,10-11). Primary sinonasal mucosal melanoma was presumed to arise from mucosal melanocytes migrated from neuroectoderm(1,6-7), The melanocytes were believed to have an important role in antimicrobial and immunological functions rather than pigmentation(7). The pathogenesis of this lesion is still poorly understood; inhaled carcinogen particularly formaldehyde has been suggested to play role (1,7,12). Sinonasal melanoma usually occurs in the sixth or seventh decade of life and rarely before the fourth decade (1,3-4,12). The youngest age as reported by Thompson LDR(1-3,5,8,10,12) et al was 13 years old. Most reports found somewhat male predilection although Khademi B(4) et al concluded that no significant difference between men and female after analyzing the data obtained from reported series in the literature review. Our case presented with epistaxis and nasal obstruction which are the most frequent presenting symptoms in most reported series(1,4,7-8,10-12). The patients may also present in advance state with lymph node metastasis(4,9-10) .

Diagnosis of malignant melanoma with presence of melanin pigment is not problematic, however, about 50-70% of nasal melanomas may show only focal and weak pigmentation(1,8,12). As in this case, small number of tumor cells contained melanin pigments and were not identifiable in the biopsy specimen. It is noteworthy that the gross specimen of having dark color of the nasal mass is most likely due to hemorrhage rather than melanin pigments. Furthermore, diverse histomorphology of sinonasal melanoma, including small cell, spindle cell, pleomorphic cell, epithelioid cell, plasmacytoid cell, rhabdoid cell, undifferentiated cell and mixed patterns has been described similar to cutaneous melanoma(1,2,6,12-15). Therefore, amelanocytic melanomas with cytologic variability are often difficult to recognize and they must be differentiated from other neoplasms, including olfactory neuroblastoma, lymphoma, plasmacytoma, undifferentiated carcinoma and sarcomas(1-2,6,10,13,15-16). In this situation, immunohistochemical stainings play an important role. S-100, HMB45 and Melan-A are currently the three most useful and widely utilized immunomarkers to identify melanocytic differentiation1^9-1^. For primary melanomas, S-100 im-munomarker is the most sensitive marker(6,17-18) and found to be positive in approximately 95-100% of the cases in comparison to 86% and 84% with HMB-45 and Melan-A immunostaining, respectively(2). However, HMB45 and Melan-A are more specific markers(8,16). Yu CH(2) et al found that HMB-45 may be a more sensitive marker than S-100 and displayed higher staining intensity in primary oral and nasal mucosal melanomas. Additionally, Melan-A immu-nomarker was also found to be positive in S-100 and HMB-45 negative primary sinonasal melanomas reported by Snyder ML et al(3). However, some studies still found S-100 as the most sensitive im-munomarker for sinonasal melanoma(10,12). In this case, the biopsy specimen, plasmacytoid cells were focally stained with S-100 immunomarker but diffuse staining of HMB-45. In the resected surgical specimen, majority of tumor cells were spindle which were diffusely immunoreactive with S-100 and only focally immunoreactive with HMB-45. These may be assumed that the immunophenotypic expressions were likely to vary upon the cell morphology and sites of lesions. Blessing K et al(17) studied on melanocytic immunomarkers in melanoma variants and found diffuse positive S-100 and patchy positive HMB-45 in majority of desmoplastic/ spindle cell melanomas; the findings were consistent with our case. Atypical melanomas, with other morphologic features including small cell, signet ring cell and rhabdoid cell often failed to express S-100 in the literatures(6,19-20). Cases of Plasmacytoid melanoma were rarely reported in the literature and some of them showed negative S-100(21) similar to our case. Additionally, Discrepancy of immunostaining patterns between biopsy and resected specimens in this case should remind us about intratumoral immunophenotypic heterogene-ity(8,19) that may affect accuracy of diagnosis especially for small biopsy specimen.

Malignant melanomas can express several aberrant immunophenotypic stainings for markers of other tumors including cytokeratin, desmin, glial fibrillary acidic protein, a-smooth muscle actin, carcinoembryonic antigen, epithelial membrane antigen, KP1, VS38, factor XIIIa, synaptophysin and chromogranin(1,6,9,11,19,22). Although majority of malignant melanomas are focally positive for these immunomarkers, diffuse and strong staining does not exclude the possibility of them. CD138 expression which is widely used as the plasma cell marker was also reported in up to 50% of melanoma by O’Connell FP et al(23). They also showed moderate to strong membranous staining. However, all of these positive cases with unspecified sites exhibited epithelioid feature. Only two cases with specified sites of plasmacytoid melanoma with CD138 expression were documented in the literatures: one from elbow(24) and the other from lymph node in the lumbar region(21). The case from lymph node was proved to be metastatic plasmacytoid melanoma from the esophagus. So, this reported case may be the first case of nasal mucosal melanoma showing plasma-cytoid areas with CD138 expression. All two cases in the literatures were misdiagnosed as plasma cell neoplasms at the beginning. The case from lymph node was also S-100 negative. CD138 immunostain-ing in both cases was focally positive. This may remind us regarding aberrant expressions of melanoma which might be misled as plasma cell neoplasm since most of the latter tumor always shows diffusely and strongly positive for CD138 immunostaining(23). Although the tumor cells in this present case were diffusely immunoreactive with CD138, they showed moderate intensity of staining. The notion that spindle cell feature of this tumor may lessen the chance of being plasma cell neoplasm may not be true since Heikal NM et al and Gauer IC et al(25) reported two cases of plasma cell myeloma with spindle cell morphology. The significance of the expression of CD138 for biologic behavior of the melanomas is still unclear and need further clarification(21).

The treatments of sinonasal melanoma include surgery, radiotherapy, chemotherapy and immunotherapy. There was no statistically significant difference in survivals between patients managed by surgery alone and surgery with combined therapy in the literature(1,4,7,10). However, radiotherapy could provide better local control(26). Chemotherapy was applied principally in the treatment of disseminated disease and for palliative purpose(13). The prognosis of sinonasal melanoma was usually poor(1,5,8). Age >60 years, presentation with obstructive symptoms alone, tumor size>3 cm., location in maxillary sinus, ethmoid sinus and nasopharynx, invasion of surrounding structures, undifferentiated histology, cervical lymph node involvement, distant metastasis, incomplete resection and recurrence of the tumor were poor predictive factors(1,7-8). Lung, liver and bone were the most frequent sites of metastasis(1). The 5-year survival rates for patients with sinonasal melanoma ranged from 25-42%(1,7,10).

Primary sinonasal mucosal melanoma comprising plasmacytoid cells with CD138 expression may mimic plasma cell neoplasm. Awareness of this aberrant expression in combination with consideration in a panel of immunohistochemical stainings including S-100, HMB45 and Melan-A should prevent the error in diagnosis.