Low grade central osteosarcoma (LGCO) is a rare subtype of osteosarcoma which represents 1-2% of osteosarcomas (1). This tumor usually affects the long bones, especially distal tibia and proximal femur in the age group between second and third decades (1). LGCO can mimic benign lesions on the plain radiographs (2, 3, 4). The prognosis of LGCO is much better than conventional type high grade osteosarcoma with 5 years survival more than 90% of cases (1, 5). To our best knowledge, LGCO involving pelvic bones is rather unusual. We therefore report a case involving ilial bone which appears to be the first case at this location of which comprehensive imaging studies were performed.

A 36-year-old male had developed pain in the left pelvic area one year prior to observing a slow-growing mass at this location which lasted for almost two years. Physical examination revealed ill-defined mass at left hip area. No gait deficit was detected. Plain radiograph revealed a large permeative mixed osteolytic-osteoblastic lesion involving peripheral half of the left iliac wing with cortical breakthrough and hair-on-end periosteal reaction (figure 1). 99mTc bone scintigraphy revealed strong radioisotope uptake in the entire left ilium extending down to the left acetabulum (figure 2). The magnetic resonance imaging (MRI) showed a marrow-replacing lesion at the left ilium with cortical destruction, sunray periosteal reaction, along with a large accompanying soft tissue mass. The lesion extended down to involve the continuing acetabulum (figure 3, 4). CT scan (figure 4 C) disclosed osteoid matrix within the mass. All findings were suggestive of osteosarcoma. Plain radiographs and CT of the chest revealed absence of metastasis. The open biopsy was performed and the initial diagnosis was conventional osteosarcoma, fibroblastic type. However, this case was reviewed thoroughly and the diagnosis was changed to LGCO. The tumor was removed by internal hemipelvectomy of left pelvic bone. The margins of resection were reportedly free of lesion by histologic examination. The radiographs of the resected specimen were shown on figure 5. The gross specimen showed a well-defined white solid mass measuring 16x12x9 cm enmeshed in the nearby skeletal soft tissue (figure 6). The histology of both biopsy- and resected specimens revealed well trabeculated woven bones surrounded by cellular spindle cells having mildly atypical hyperchromatic nuclei and occasional mitotic activity (figure 7A and 7B). Neither high grade nor dedifferentiated foci were detected. Immunostains using anti-MDM2 and CDK4 antibodies demonstrated positive nuclear stainings (figure 8A and 8B), supporting the diagnosis of LGCO (6). After surgery he was referred to the registered provincial hospital for follow-up. Recently we have been verbally acknowledged that he developed pulmonary metastasis. No information regarding recurrence of this tumor was known. 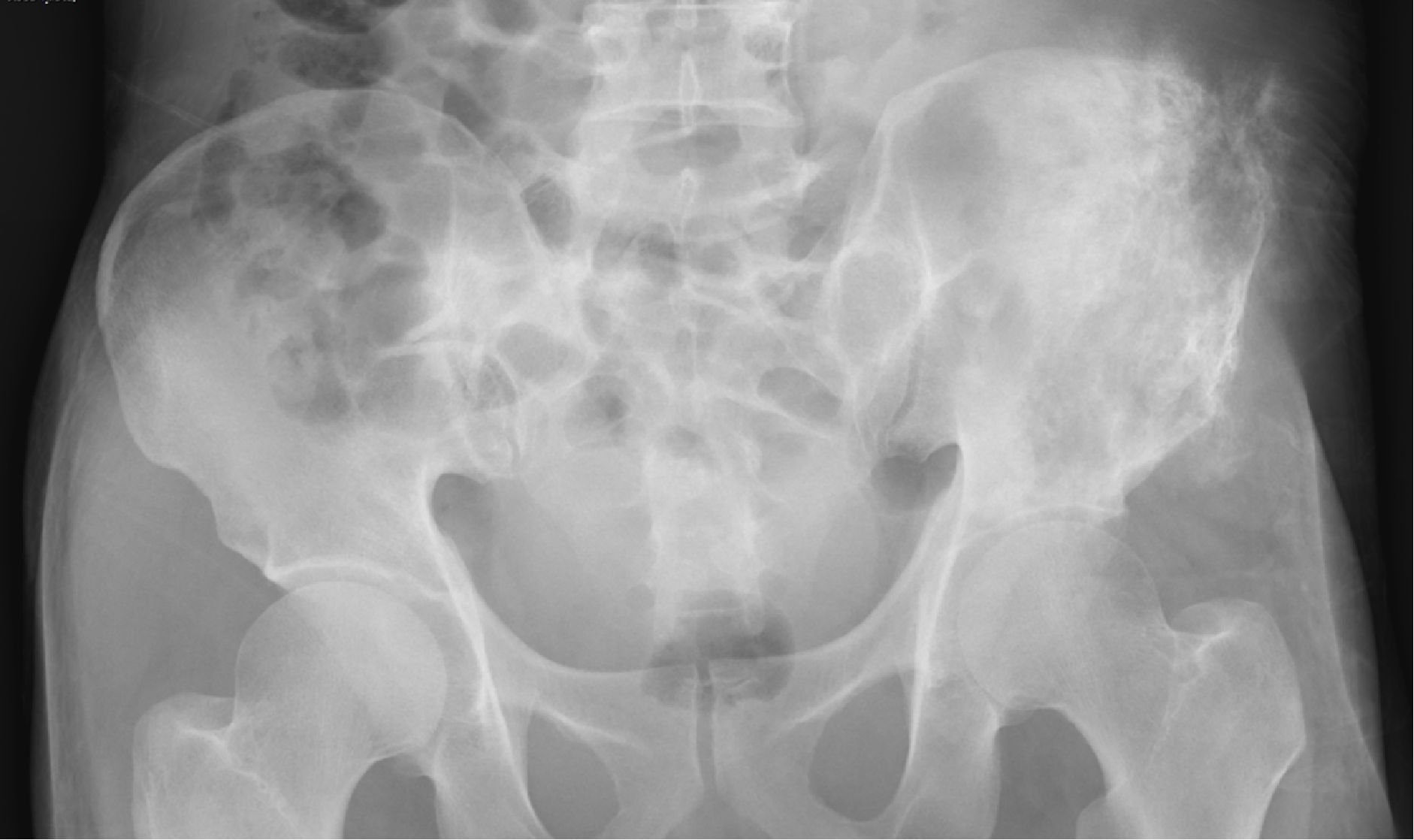 Figure 1. A large mixed osteolytic and osteosclerotic lesion involved peripheral half of the left iliac wing that breaking through cortex with hair-on-end periosteal reaction and a wide area of cloud-like osteoid matrix.

LGCO is a less aggressive type of osteosarcoma predominantly arising in long bones with limited potential for distant metastasis (1, 5). Marginal excision often resulted in local recurrence (1, 5). Wide excision with adequate margin provided low chance of local recurrence (1, 5). Many reports mentioned that recurrent tumors often transform to a higher-grade osteosarcoma (dedifferentiated LGCO) and possess higher metastatic potential (1, 4, 5, 6). Chemotherapy (neoadjuvant or adjuvant regimens) and radiotherapy did not appear to have substantial benefit in the treatment of LGCO (1, 4, 5, 6, 8). To our best knowledge, low grade osteosarcoma of pelvic bones was rarely reported in the literature (2, 7), our case appears to be the first comprehensive imaging illustrations for this particular site.

Figure 3. Coronal MR images on Tl-weighted (A) and T2-weighted with fat suppression (B) sequences revealed bone destruction of the left ilium accompanied by a large soft tissue component. No definite involvement of the left hip joint was demonstrated. 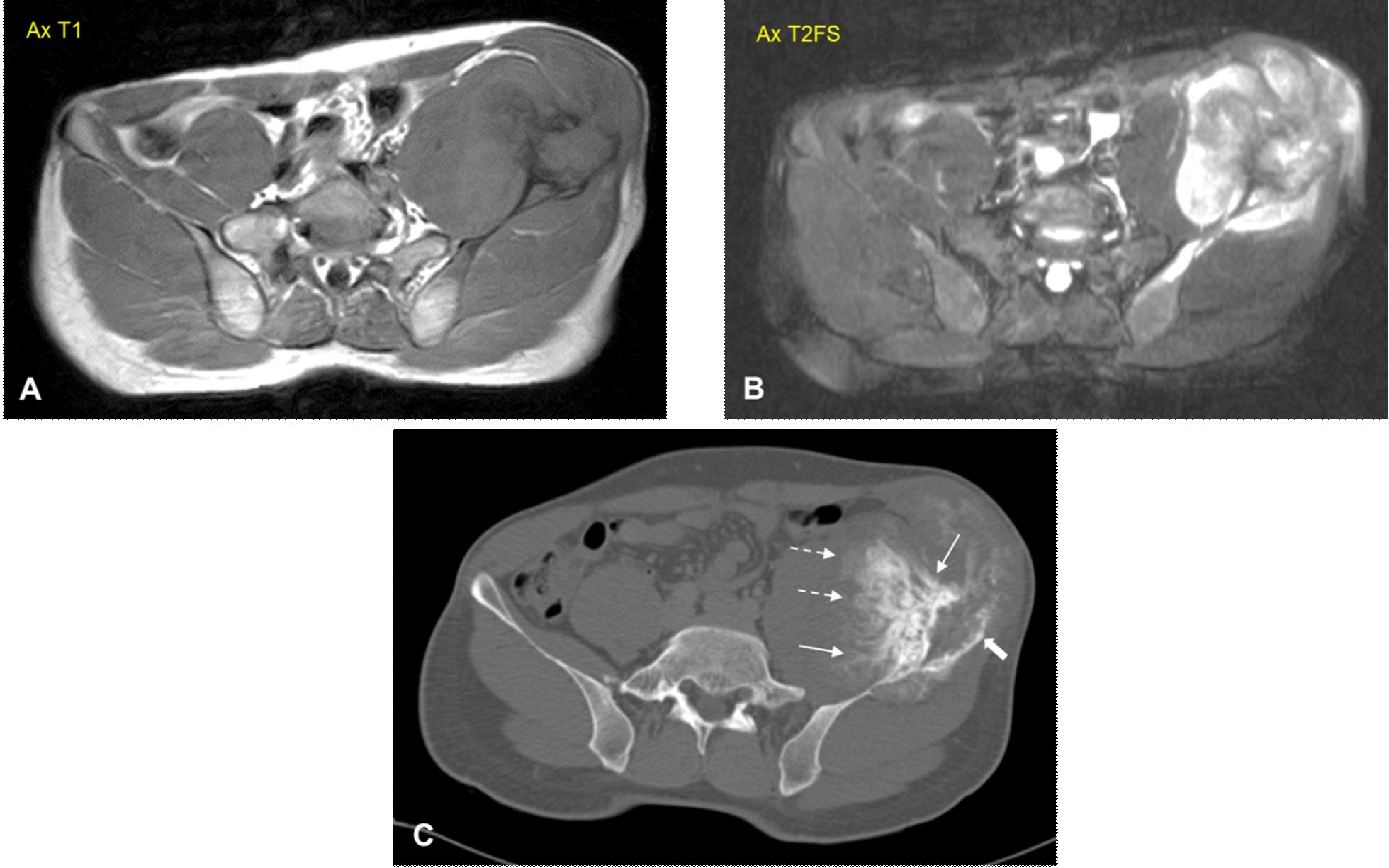 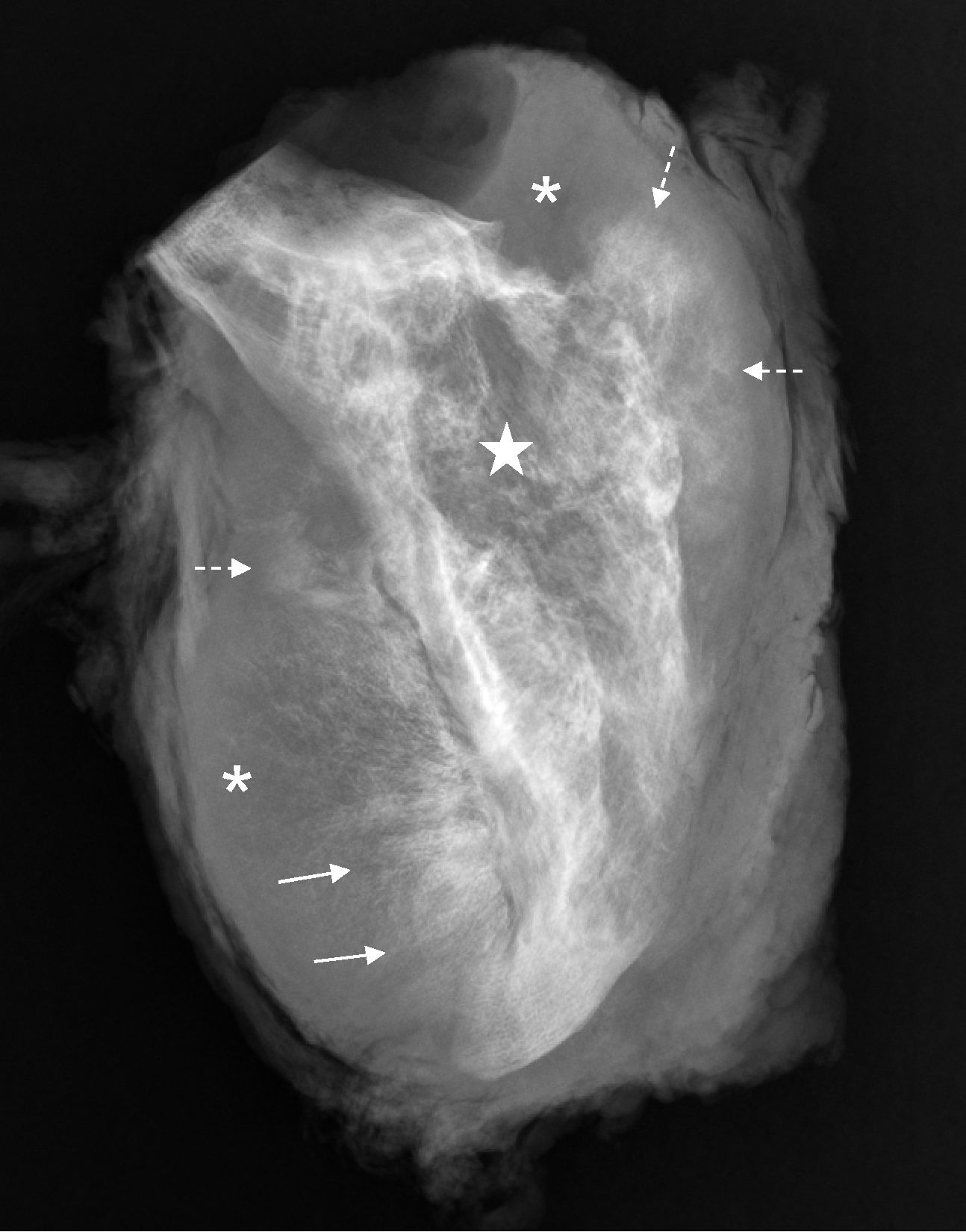 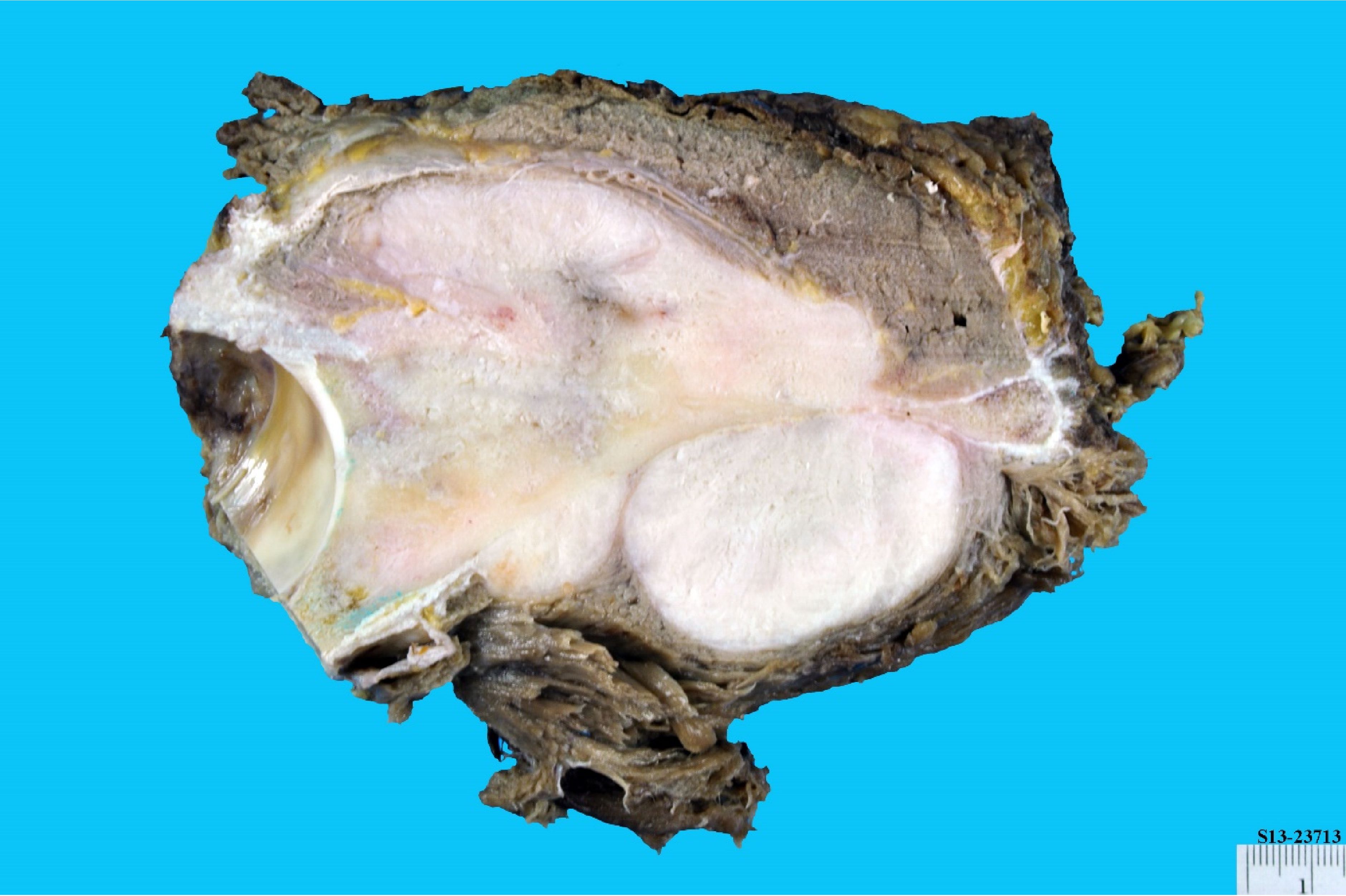 Differential radiologic diagnosis of LGCO includes benign fibro-osseous lesions: fibrous dysplasia, nonossifying fibroma, desmoplastic fibroma and conventional osteosarcoma. The presence of aggressive imaging features on plain radiographs such as cortical destruction, and aggressive-type periosteal reaction provides helpful clue for differentiation of LGCO from benign fibro-osseous lesions. However, almost one third of LGCO in a study of 90 cases did not show features of malignancy on plain radiographs (2). In contrast, CT and MRI are helpful in every instance in identifying cortical disruption and soft tissue component, which are the key characteristics of malignancy (2, 3). Our rare case of LGCO of the left ilium demonstrated such imaging features on both plain radiographs and MRI. In addition, mixed osteolytic-osteosclerotic radiographic pattern in our case was classified as the least common subtype of LGCO (2). Interestingly, there was another case of LGCO arising in the nearby rare location of sacral bone merely revealed a large well defined, expansile, mixed osteolytic-osteosclerotic lesion without cortical disruption or periosteal reaction (7).

By histologic examination, diagnosis can be particularly difficult on biopsy specimens when only the fibroblastic stroma is obtained without the osseous component. The differential diagnosis by histologic appearance includes fibrous dysplasia and conventional fibroblastic type osteosarcoma. The characteristic of LGCO in differential diagnosis from fibrous dysplasia is the permeative growth pattern against preexisting host bone (4). In contrast to the conventional high grade fibroblastic osteosarcoma, spindle cells in LGCO often show bland nuclei or mild nuclear atypia with absence or presence of minimal mitotic figures. The key factors in differential diagnosis of LGCO from benign fibrous or fibro-osseous lesions of bone are the presence of cortical disruption and soft tissue extension (2, 3, 4). Immunohistochemical stains for MDM2 and CDK4 were shown to be sensitive and specific markers for the diagnosis of LGCO, and helped distinguish LGCO from other benign fibrous or fibro-osseous lesions of bone (6). Similar to other low grade sarcoma, dedifferentiation of LGCO cases has been reported in majority of the recurrent tumor and 10-36% of primary LGCO (1, 5, 8, 9). Interestingly, dedifferentiated component of LGCO also demonstrated positivity to MDM2 and CDK4 immunostaining, confirming the value of these markers for aiding the diagnosis of LGCO (9).

Concerning our LGCO case, we did not observe high grade component by histologic examination of the resected specimen and all surgical margins were free from tumor. This patient was not placed on neither radiotherapy nor chemotherapy after acknowledgement of the report of LGCO. However, he developed pulmonary metastasis finally. As far as we knew of the incubation period between tumor resection and metastasis was less than three years which seemed to be shorter than those reported cases (1, 5, 8, 9 ). However, the clinical course of the present case was quite similar to a case having lesion at similar site reported by Malhas et al ( 10 ): the patient developed recurrences and finally pulmonary metastasis 15 months after enbloc resection of ilial bone with reconstruction of fibula grafts. Since cases at this location were still scarce, it may be difficult to deduce as to whether pelvic lesions have worse prognosis than those of extremities. However, it is noteworthy to address.

In summary, we described a case of LGCO arising in a rare location of ilium with comprehensive imaging illustrations. LGCO is a rare subtype of osteosarcoma which can be histologically misdiagnosed as other benign or malignant bone lesions. The awareness of this entity should lead to avoid the over and under treatment.