Heart transplant for multiple recurrences of familial cardiac myxomas in an adolescent patient: a case report and literature review

Cardiac myxoma is the most common primary cardiac neoplasm occurring in all age groups. After resection, familial cardiac myxoma is more likely to recur than that arises in sporadic fashion. In this report, we describe an adolescent patient experiencing multiple recurrences of cardiac myxomas and underwent heart transplant. This is the first report of such a case at our institution.

Primary cardiac tumours are rare, with an incidence rate of 0.0017% to 0.19% in unselected autopsies(1). The majority of these tumours are benign. Rhabdomyomas and myxomas are the most common primary tumours of the heart in children and adults, respectively.

Cardiac myxoma is the most common primary neoplasm of the cardiac muscle commonly arising from the endocardium. It can be detected in all age groups (prenatally to 97 years old). Mean age at presentation is between the fourth and seventh decades of life. More than 90% of cardiac myxomas occur sporadically. Less than 10% of them are associated with Carney complex (myxoma syndrome), which is an autosomal dominant pattern of inheritance. This tumour is commonly seen in younger patients without sex predominance(2).

High recurrence rate is reported for familial cardiac myxomas; nevertheless, multiple recurrences are very rare(3). In this report, we describe a patient having multiple recurrences of multicentric cardiac myxomas and underwent cardiac transplantation. This is the first report of such a case at King Chulalongkorn Memorial Hospital. The study was approved by the institute's ethics committee (COA No. 293/2018 and IRB No. 109/61).

In 2010, a 10-year-old girl was referred to our hospital due to a mass in left atrium and congestive heart failure. Two months earlier, she developed subacute progressive dyspnoea, which was worsened by exertion. She also had orthopnoea and chest tightness. Initial physical examination revealed right ventricular heave and thrill, pansystolic murmur grade 4/6 at apex, and hepatosplenomegaly. Chest x-ray displayed cardiomegaly and pulmonary venous congestion. Neither rash nor endocrinopathy was identified. Her father had recurrent cardiac myxoma with cerebral embolic stroke. He underwent two episodes of surgical removal in 2003 and 2010. Other family members were healthy. She was diagnosed as familial cardiac myxoma. Surgical removal of the mass was performed.

Two years after initial resection of the mass, she developed acute onset of right leg pain and pallor along with new onset of hypertension. Five intracardiac masses were also identified. Two of them were in left atrium. Others were in left ventricle, pulmonary vein, and interatrial septum. She was diagnosed as recurrent cardiac myxomas, acute right superficial femoral artery, and bilateral renal artery embolism with bilateral renal infarction. Surgical removal of masses, fasciotomy, and embolectomy were performed. Bilateral renal infarction was clinically improved by medical treatment. A right ventricular mass was noted in 2 years after the second episode of surgical removal. Excision was done. In three years afterward, she developed multiple intracardiac masses and underwent heart transplantation.

During the course of gross examination, six intramural masses (0.8 – 3.5 cm in the greatest dimension) are identified (Figure 1). Four of them are in the right ventricle. One of them is in the left atrium. The other mass is in the left ventricle. All of these masses are of solid subtype showing globular, with a smooth and shiny surface. The cut surface is variegated. Whereas most of them show mucoid appearance with tan white cut surface, some of them displayed dark red discolouration (Figure 2).

Microscopically, these masses reveal several clusters of myxoma cells, which are characterised by cytologically bland, plump spindle cells possessing oval nuclei and eosinophilic cytoplasm. These cells are around small blood vessels which are surrounded by oedematous stroma (Figure 3).

Her body was sent for autopsy. The heart shows multiple foci of myocardial necrosis with adjacent loose fibrocollagenous stroma containing some lymphocytes (Figure 4). These lesions account for approximately 30% of the myocardium. These lymphocytes reveal CD3 immunoreactivity. Subendocardial myocytolysis is occasionally seen. The aorta and coronary arteries are unremarkable. Scattered fibrin thrombi are also observed within pulmonary capillaries and glomeruli.

Figure 3 Histologic section of a myxoma (Haematoxylin and eosin, x400).

Figure 4 Autopsy finding of the heart (Haematoxylin and eosin, x200).

Primary cardiac neoplasms are very uncommon in children and adolescents. The clinical presentation is varied, including dyspnoea, chest pain, and cyanosis. Cardiac myxoma is the one of the most common cardiac neoplasms in this subpopulation. According to a systematic review, its prevalence is highest in 10 – 18 years of age. After being resected, this tumour rarely recurred(4).

Less than 10% of cardiac myxomas are presented in the context of Carney complex(2). Its diagnostic criteria are listed in Table 1(3). The patient and her father were presented with cardiac myxomas which were histologically proven. Neither endocrinopathy nor spotty skin pigmentation was identified. This is consistent with the diagnostic criteria of Carney complex. Cardiac myxomas occur at a younger age comparing with those of sporadic cases, multicentrically, and in any, or all, cardiac chambers.

Table 1 Diagnosis of Carney complex needs the presence of two manifestations of the disease listed or one of these major criteria and one of the supplemental criteria.

Multiple recurrent familial cardiac myxomas are previously reported (Table 2)(5,7-20). These tumours usually occurred in female with varied age of onset, ranging from 10 to 73 years old. The most common site at initial presentation was left atrium. All of these patients were treated with tumour resection. None of them underwent cardiac transplantation. Cardiac myxoma is a rare underlying heart disease underwent heart transplant. Comparing with the previously reported cases, the current case was presented with the early-onset disease. Among Asian countries, common causes of end-stage heart diseases to undergo heart transplant were comparable with those of the global registry. Ischaemic cardiomyopathy, non-ischaemic cardiomyopathy, and valvular heart disease were leading causes for recipients to undergo heart transplant, respectively(21). 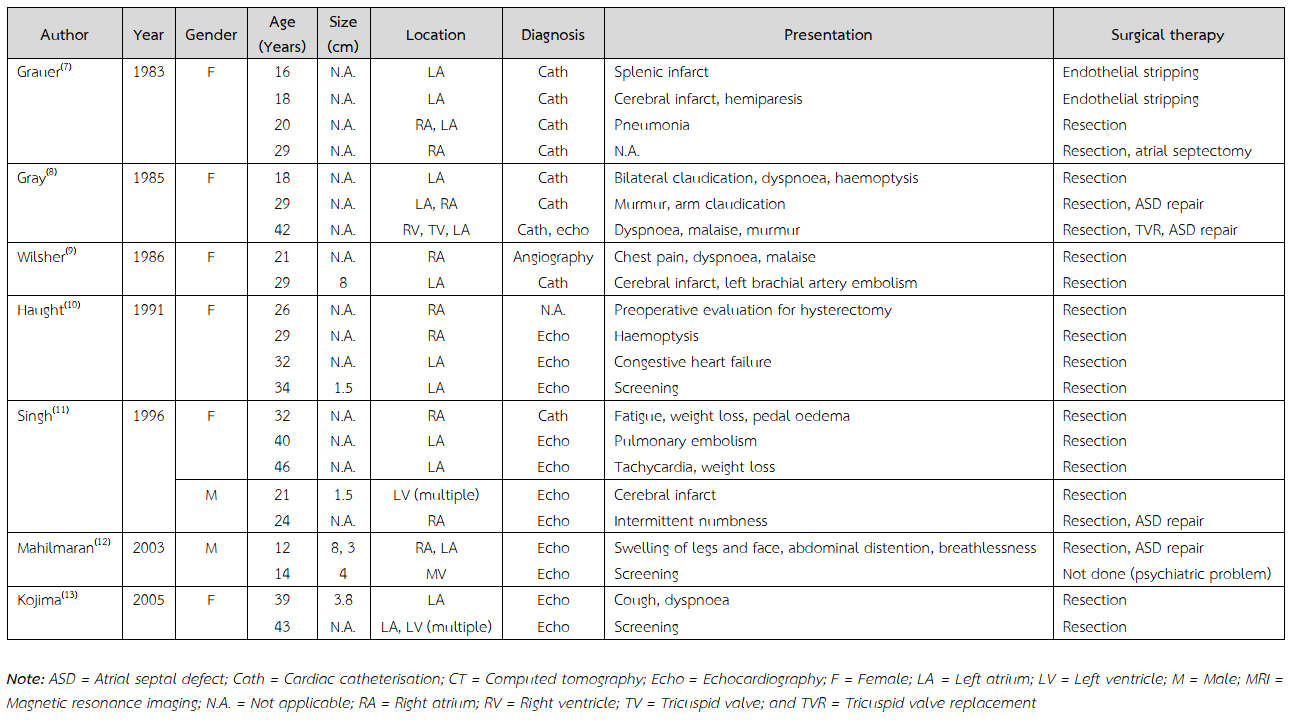 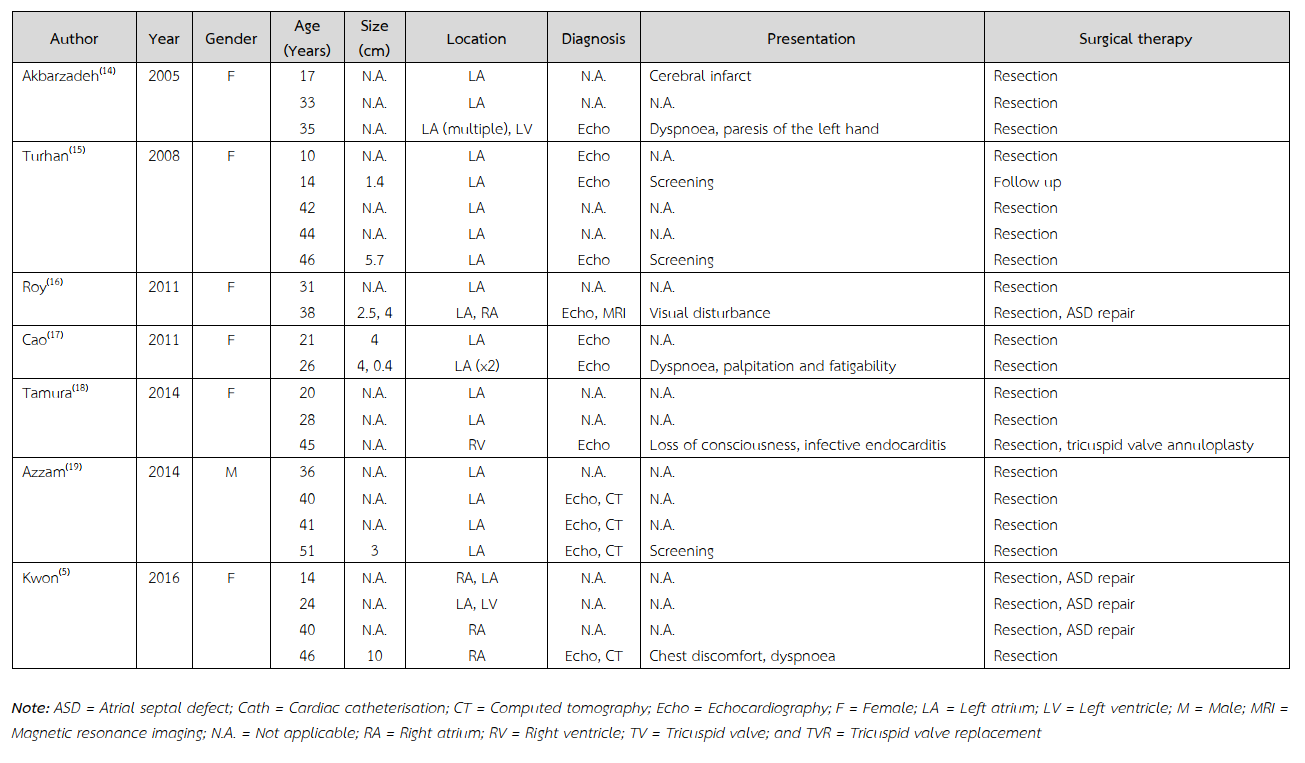 We presented a case with multiple recurrences of familial cardiac myxomas who underwent heart transplant at our institution. Multifocal and recurrent cardiac myxomas seem more common in younger age group who has a family history of tumour. After nine months of heart transplantation, she passed away as a result of acute cellular rejection and septic shock.