Primary testicular NK/T-cell lymphoma is rare. We report a 61-year-old Thai man who presented with right testicular abscess clinically but tissue obtained from incision and drainage was proven to be NK/T-cell lymphoma. The lymphoma cells were small to medium in size and showed angiocentricity with associated necrosis. The lymphoma cells were CD3+ (cytoplasmic), CD43+, CD56+, TIA-1+, Ki-67+ (nearly 100%) and EBV encoded RNA (EBER)+. Clinical staging was IE. CHOP chemotherapy and intrathecal methotrexate for primary CNS prophylaxis were administered with partial reduction of the testicular mass. However, 5.5 months after diagnosis, the patient developed left testicular enlargement and left facial palsy caused by leptome-ningeal involvement. The patient died of progressive disease 9 months after diagnosis. The clinical course in this patient was aggressive, similar to those described in the literature review except for the uncommon CNS involvement. Based on 19 cases of primary testicular lymphoma (including the present case) and 15 cases of testicular involvement by NK/T-cell lymphoma elsewhere, the former seem to be less aggressive than the latter but the difference is not statistically significant in either overall median survival (32 vs. 16 weeks, p = 0.086) or mean survival (29.4 vs. 17.9 weeks, p = 0.083).

A previously healthy, 61-year-old, Thai man had presented with a right testicular mass for 4 months and later he experienced testicular pain and fever. He was diagnosed as having testicular abscess at a local hospital. Incision and drainage (I&D) was performed and oral antibiotics were given. The tissue with some necrotic debris was obtained and submitted for microbiological study and pathologic examination. The microbiological study yielded no growth of microorganism but the pathologic diagnosis given by a pathologist at a private pathology laboratory based on histologic findings only was malignant round cell tumor, suspicious of malignant lymphoma. Immunohisto-chemistry was recommended for further evaluation. The patient was then referred to Siriraj Hospital for further management.

Three weeks after I&D, the patient attended the outpatient department service of the Division of Urology, Department of Surgery at Siriraj Hospital. No other significant clinical history was obtained except for night sweats. Physical examination revealed an enlarged right testis, measuring 15 cm. in maximal diameter. The small healed I&D wound was noted. No lymphadenopathy or organomegaly was detected. Complete blood count and blood chemistry results were within the normal ranges. The histologic sections and corresponding tissue blocks were submitted to the Department of Pathology for review. The diagnosis was extranodal NK/T-cell lymphoma, nasal type, according to the WHO classification (2008) [6].

Two weeks after the first visit at Siriraj Hospital, the patient underwent bone marrow examination and computed tomography (CT) of the chest and whole abdomen for clinical staging which corresponded to stage IE. Cerebrospinal fluid (CSF) was also obtained and no lymphoma cells were detected. The International Prognostic Index (IPI) was low (IPI = 1). So, 10 days after a definite diagnosis or 37 days after I&D, the patient received CHOP regimen and intrathecal methotrexate administration for primary CNS prophylaxis. The patient refused both orchiectomy and local radiotherapy. A week later, the right testicular mass reduced in size to 9x6 cm. Two weeks later, the ear, nose and throat (ENT) region was examined at the Department of Otolaryngology. No abnormalities were detected. Partial response to CHOP chemotherapy was obtained after the fourth course of CHOP as the right testicular mass reduced in size to 5.2 cm.

in maximal diameter. But, after the fifth course of chemotherapy, the right testicular mass grew up to 7 cm. and, 3 weeks after the seventh course of chemotherapy or 5.5 months after diagnosis, the patient developed generalized bone pain and additional left testicular enlargement to 10 cm. in maximal diameter. Oral prednisolone (20 mg./day) was given as a palliative treatment. Three days later, the patient developed left facial palsy caused by leptomenin-geal involvement as lymphoma cells were detected in the CSF. He received palliative oral chemotherapy and further intrathecal therapy (hydrocortisone, methotrexate, and Ara-C) twice weekly without any improvement. A week later, CT of the brain revealed a subacute lacunar infarction at left basal ganglion and enhancing soft tissue lesions at both nasal cavities and paranasal sinuses. The patient also developed pain at both legs that progressed to be cauda equina syndrome, requiring urinary bladder catheter dwelling. During admission and while receiving palliative treatment, the patient developed febrile neutropenia and influenza A pneumonia but he recovered eventually from pneumonia. During this time, the right and left testes measured 6 cm. and 10 cm. in maximal diameter respectively. Local irradiation was given at both testes for a 10 day period and discontinued as the patient asked for only palliative care. He was discharged 7.5 months after diagnosis and received palliative medication including oral prednisolone (20 mg./day), morphine syrup and antipyretics. During this terminal phase, the patient had suffered from progressive fatigue, muscle pain, bone pain, anorexia and fever. He died of progressive disease 9 months after diagnosis at a local hospital.

The malignant round cells described in the original pathology report appeared to be small to medium-sized lymphoma cells, showing diffuse infiltration with angiocentricity and multifocal necrosis. Immunohistochemistry demonstrated that the lymphoma cells were CD3+ (cytoplasmic), CD43+, CD56+, TIA-1+ and Ki-67+ (nearly 100%). Other markers were negative including betaF-1, CD4, CD5, CD8, CD20, CD34, CD68, CD117, myeloperoxidase and TdT. Diffuse and strong positivity with in-situ hybridization for EBV RNA (EBER) was noted in the lymphoma cells. (Figure 1) Molecular genetic study for rearrangement of TCR genes was performed but the target fragment was not successfully amplified due to insufficient DNA quality. Finally, the diagnosis of extranodal NK/T-cell lymphoma, nasal type, was given according to the WHO classification (2008) [6]. Lymphoma cells were found in the CSF at the time of left facial palsy, indicating leptomeningeal involvement. Only few cells had few azurophilic granules. (Figure 2) 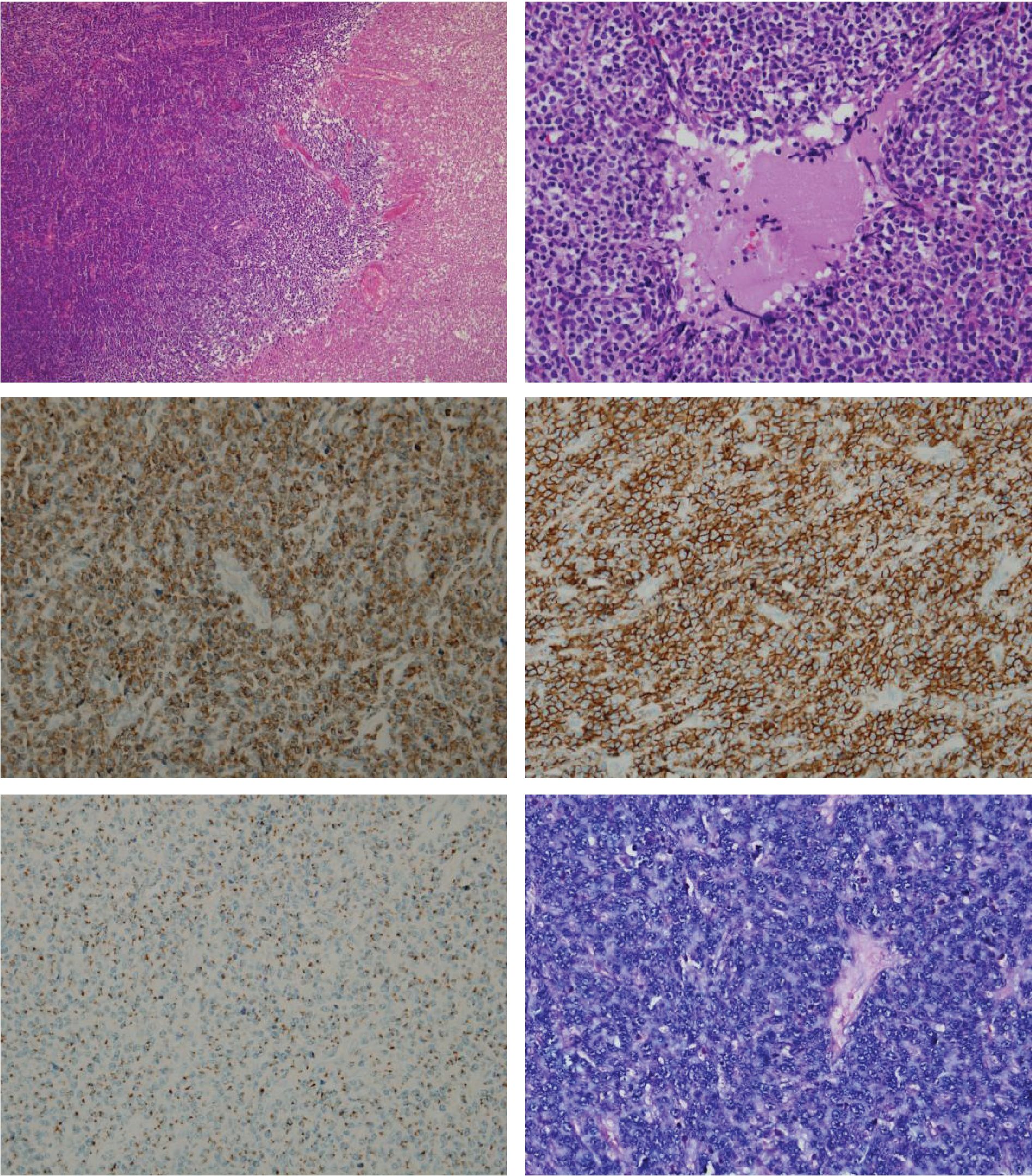 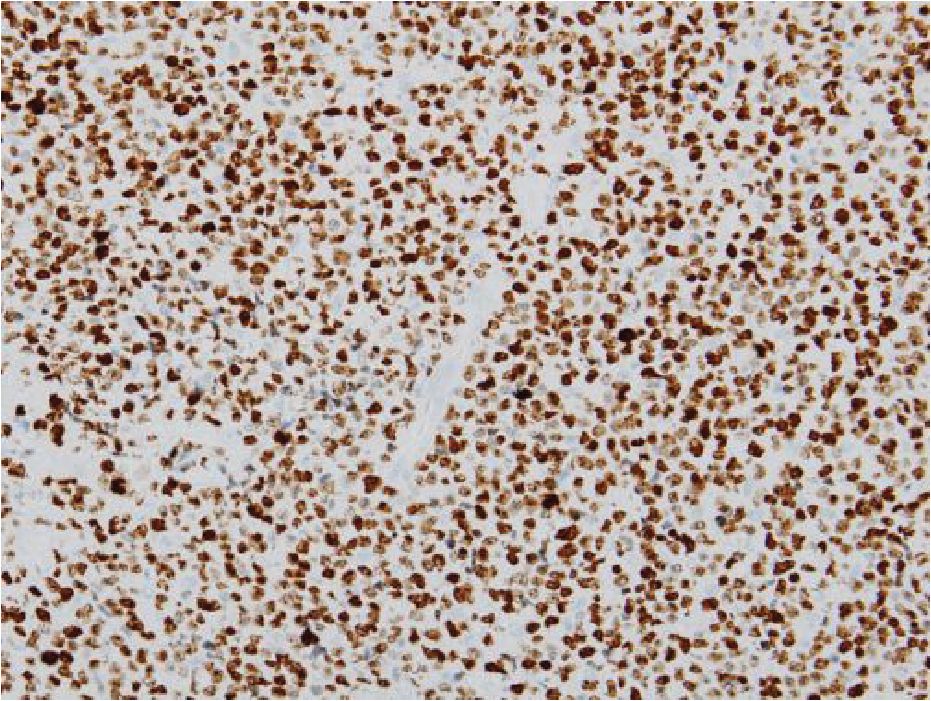 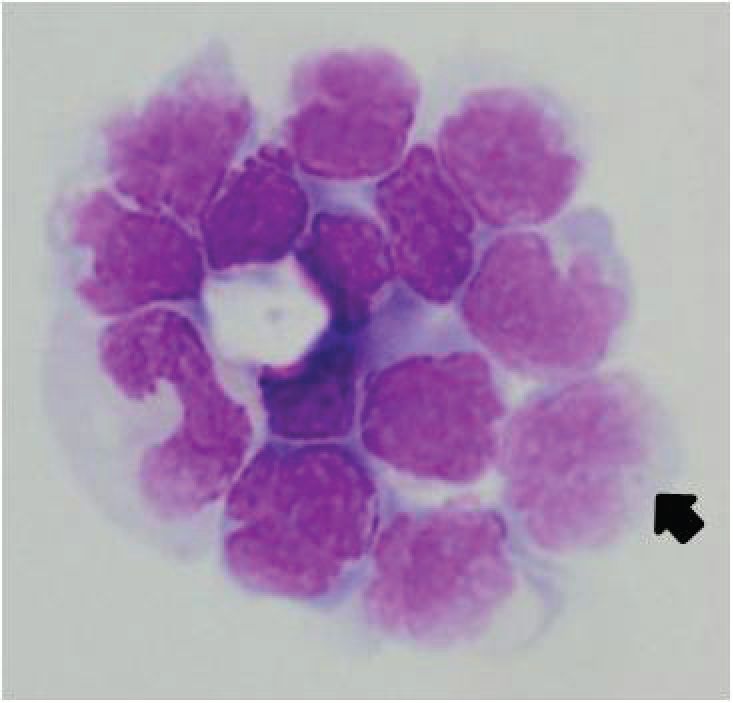 The diagnosis of nasal-type NK/T-cell lymphoma requires the conventional approach according to the WHO classification (2008) [6]. After clinical staging work-up, the lesion was localized to the testis and the morphologic, immunopheno-typic and genetic findings confirmed that this is primary testicular NK/T-cell Lymphoma. Azurophilic granules recognized in Wright or Diff-Quik stained cytologic preparation will be very helpful to indicate NK-cell or cytotoxic T-cell phenotype of the lymphoma cells despite the nuance of cytologic features including lymphoblastic, small, small to medium, medium, medium to large and large pleomorphic or anaplastic cells. Syncytial aggregates or small clusters of large pleomorphic cells can be seen in fine needle aspiration [7]. It is noteworthy to be aware that azurophilic granules may be found in only some of the lymphoma cells [8]. In this present case, azurophilic granules were hard to find in the CSF. In the histologic sections, the tissue necrosis caused by lymphoma cells infiltrating around the blood vessel (angiocentricity) as well as angiode-struction is a salient feature described in this particular type of lymphoma [6, 8]. But in some case reports, only coagulation necrosis and ulceration were described [9]. Softening of tissue following necrosis occurred in the testicular mass then led to the clinical impression of testicular abscess in the setting of a testicular mass with pain and fever as diagnosed at a local hospital in the present case. Thus, testicular lymphoma should be kept in mind when encountered with testicular abscess. Tissue obtained from incision and drainage should be submitted not only microbiological study but also pathologic examination.

From the compilation of three large series of 98 cases of nasal-type extranodal NK/T-cell lymphoma (non-nasal site) from Hong Kong, Singapore and Korea, only 9 cases had testicular involvement (9.2%) or approximately 5.5% of all nasal-type extranodal NK/T-cell lymphoma of both nasal and non-nasal sites. None of these 9 cases had CNS involvement. All patients died of disease shortly, varying from 1 to 40 weeks. The patients usually showed a good initial response to chemotherapy but commonly relapsed [8, 16, 17]. In contrast to the pattern of dissemination of diffuse large B-cell lymphoma of the testis, regional lymph node involvement is quite uncommon in primary testicular NK/T cell lymphoma, even with widely disseminated disease [18]. 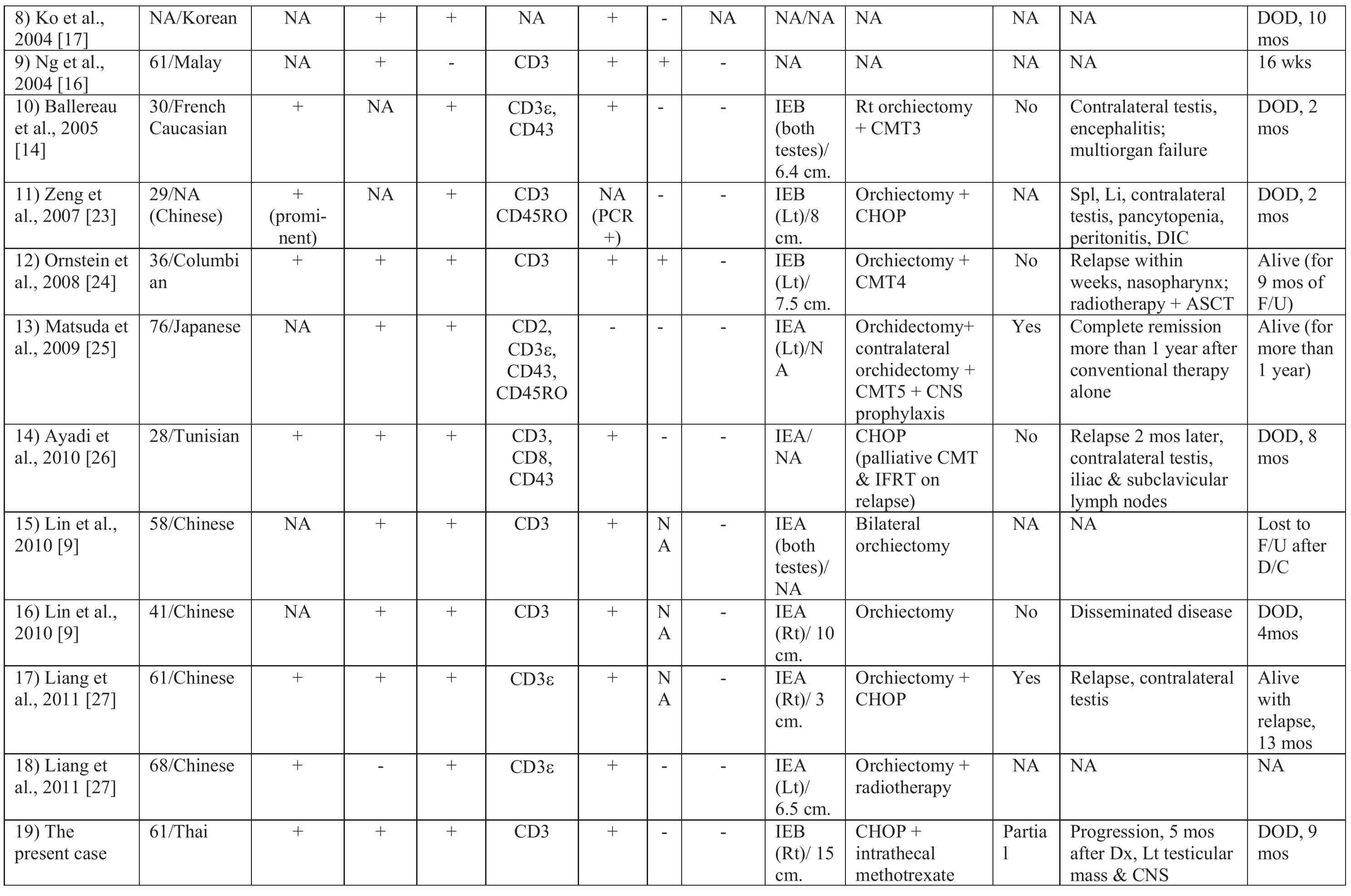 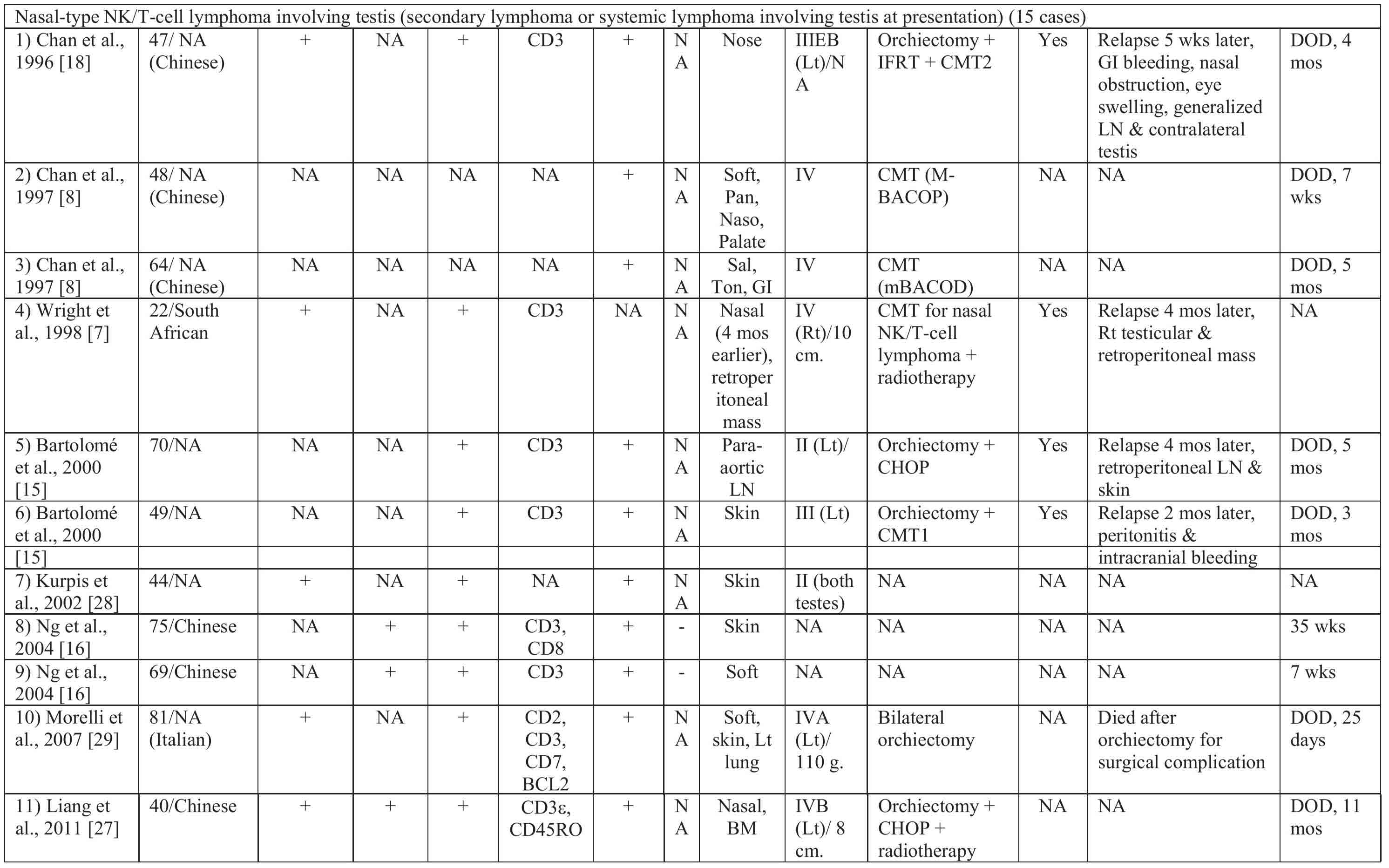 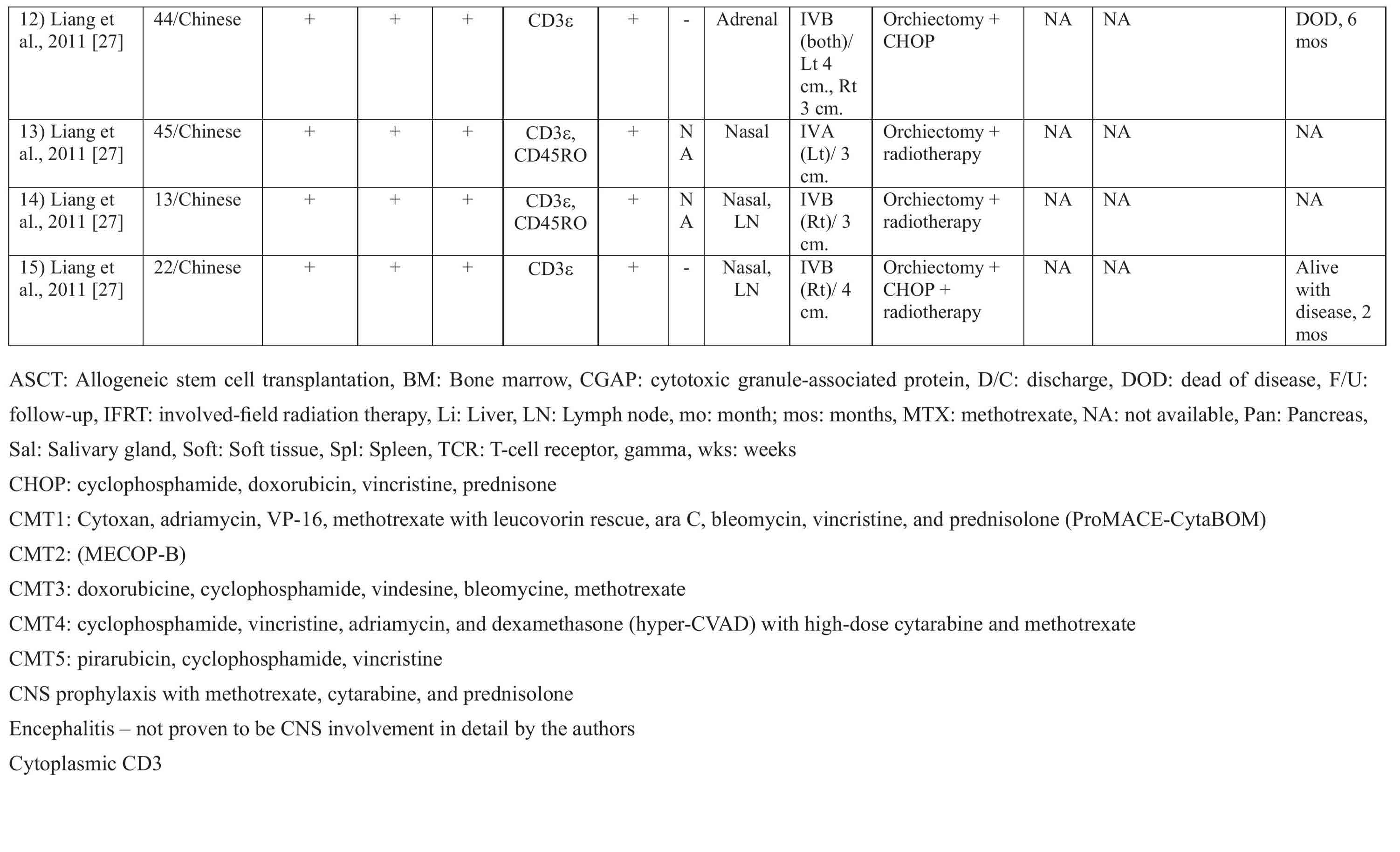 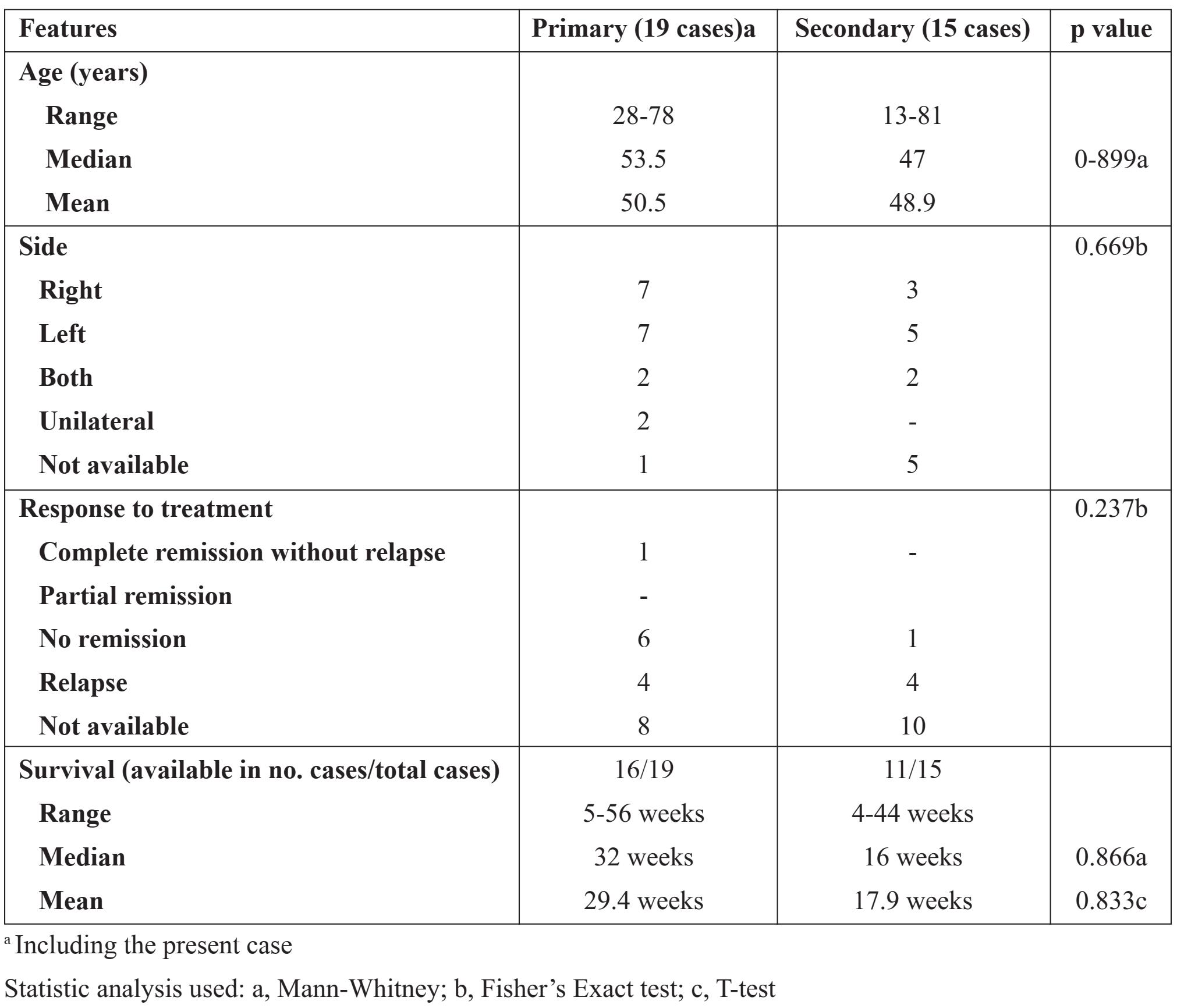 It may be arguable that this is in fact patients with progressive disease, already disseminated at the beginning [18]. A case reported by Sun et al. as aggressive NK-cell lymphoma/leukemia [19] initially presented as primary testicular lymphoma but the disease relapsed 5 months after treatment as leukemic phase. In this particular case, azurophilic granules were described in the lymphoma cells but neither immunostaining for cytotoxic granule associated protein nor in situ hybridization for EBER was performed. Nevertheless, this particular case was often included in the literature review as the first case report of nasal-type NK/T-cell lymphoma of the testis.

Relapse has been reported up to 40% of patients with stage I or II disease of primary nasal NK/T-cell lymphoma who received only local irradiation. Lymphomatous involvement at distant sites such as the skin, gastrointestinal tract and testis is quite common, suggesting occult dissemination in these sites but unable to detect by conventional clinical staging procedure [30]. It is possible that patient who presents with testicular or other primary non-nasal NK/T-cell lymphoma should undergo a thorough ENT examination and even PET/CT scan to search for any occult nasal NK/T-cell lymphoma. If nasal involvement is documented, the patient should receive treatment as advanced disease. The use of L-asparaginase in recent regimens of combination chemotherapy has resulted in substantial improvements in outcome in high-risk, refractory or relapsed patients. High-dose chemotherapy and hematopoietic stem-cell transplantation with autologous or allogeneic hematopoietic stem cells may be beneficial to selected patients. Prognostication of patients with clinical prognostic models, such as modified NK prognostic model, and circulating Epstein-Barr DNA load may be useful in the stratification of patients for various treatment modalities [30].

The authors declare that they have no conflict of interest.

1. Sukpanichnant S. Analysis of 1983 cases of malignant lymphoma in Thailand according to the World Health Organization classification. Hum Pathol 2004;35:224-30.