Biopsy remains the only most reliable tool for establishing a definite diagnosis of prostatic carcinoma. In the prostate-specific antigen (PSA) screening era, the rate of prostate needle biopsies substantially increases which has resulted in detection of very small tumors. In the same time, a variety of benign structures or lesions are also obtained. These benign structures or lesions sometimes can simulate prostatic adenocarcinoma and can cause confusion in diagnosis. False-positive diagnosis may lead to serious clinical, psychological, and medico-legal consequences. In this communication the author would like to summarize common benign mimickers of prostatic adenocarcinoma for general pathologists. Common benign mimickers of prostatic adenocarcinoma that may be seen in biopsies are listed in Table 1.

Figure 1
A) Rectal tissue in biopsy. The crypts of Lieberkuhn may look like malignant prostatic acini.
B) Higher power of A) showing goblet cells and lamina propria, not fibromuscular stroma of prostatic tissue

Rectal tissue (Fig 1) is frequently present in transrectal needle biopsy specimens of the prostate gland since it is necessary to pass the biopsy device through rectal canal. These fragments, particularly when distorted, may cause confusion and expert consultation may be required. Schowinsky and Epstein reported 16 needle biopsies of prostate gland with distorted rectal tissue sent for confirmation.5 Blue-tinged intraluminal mucinous secretion, prominent nucleoli, mitotic activity, extracellular mucin, and adenomatous changes were features mimicking prostatic carcinoma. They concluded that the presence of lamina propria, rectal tissue on a detached fragment, associated inflammation, goblet cells, and muscularis propria were useful diagnostic clues in confirming that they were distorted rectal fragments.

Cowper’s glands may be occasionally obtained in prostatic biopsy. They are small, paired bulbomembranous urethral glands that may be mistaken for prostatic carcinoma (Fig 2).6,7 Typically, they are composed ofclosely packed uniform acini lined by benign cells with abundant apical mucinous cytoplasm. Exclusion is based on the fact that the lining cells show negative immunoreactivity for PSA and prostatic alkaline phosphatase.8 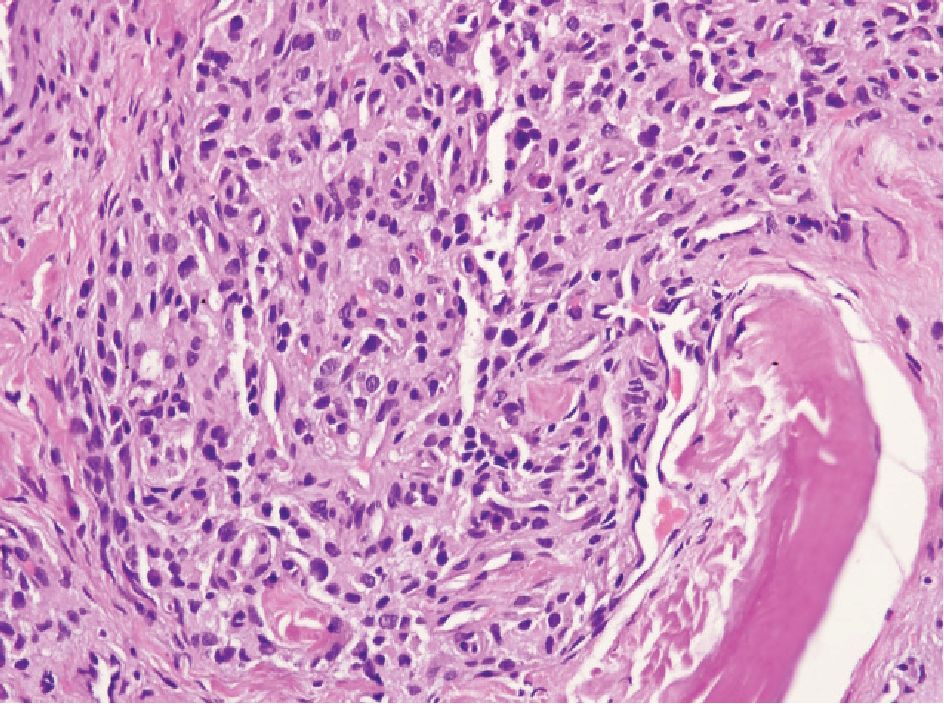 Paraganglion can be located within the peripheral prostatic stroma but more commonly in periprostatic tissue. Occasionally, it can be encountered in biopsy specimens and can cause diagnostic problem.9,10 It is characterized by small, solid nests of cells with clear or amphophilic cytoplasm (Fig 3), resembling Gleason pattern 4 prostatic adenocarcinoma. The cells may show hyperchromatic nuclei but nucleoli are not present. In problematic case, immunostain for chromogranin is helpful since they are neuroendocrine cells.

Seminal vesicle and ejaculatory duct tissue is at times included in needle biopsy specimen. They are composed of numerous small glands and can look like small acinar carcinoma.11 The presence of hyperchromatie nuclei and striking pleomorphism (Fig 4) is of practical importance. Golden-brown lipofuscin pigment is usually identified in the cytoplasm and can strongly support the diagnosis although the same pigment can rarely be found in normal, hyperplastic, preneoplastic (PIN), and malignant prostatic tissue.12,13,14 It is when the cellular atypia and pigmentation are not prominent that a significant diagnostic challenge will occur. Negative prostate-specific antigen (PSA) and prostatic acid phosphatase (PAP) and positive 34PE12 immunostains can be sufficiently confirm that these are seminal vesicular and ejaculatory ductal epithelial cells.15

Atrophy is a very common benign change, often seen in the peripheral zone where carcinoma commonly occurs. Therefore atrophic acini are easily obtained at the time of biopsy (Fig 5). Atrophy is a lesion that sometimes is over-interpreted as carcinoma.16 Atrophy is commonly associated with chronic prostatitis. Atrophy maintains a lobular architecture seen in low power with uniform cells and lacks nucleoli. When distorted, it can look very much like small gland carcionoma and immunostain for basal cells should be performed.

Basal cell hyperplasia (Fig 6) is typically seen as part of nodular hyperplasia which commonly arises in the transition zone,17 but can also affect the peripheral zone.18 It, therefore, can be present in biopsy specimens, causing confusion in diagnosis.

The term “crowded acini” is occasionally used by some authors to represent simple focal collection of groups of acini usually with small size, that does not display a nodular feature as adenosis. The presence of basal cells in these lesions excellently confirms their benignancy.

Figure 8 A) and B) Simple non-specific prostatitis associated with artifact may lead to questionable malignancy. Exclusion may require immunohistochemical study.

Inflammatory processes can lead to glandular distortion and nuclear atypia to an extent that they are mistaken for malignant acini. Inlammatory cells and macrophages can, by themselves, look like tumor cells. Non-specific prostatitis, in which lymphocytes and plasma cells are prominent, can resemble poorly differentiated individual tumor cells (Fig 8).7 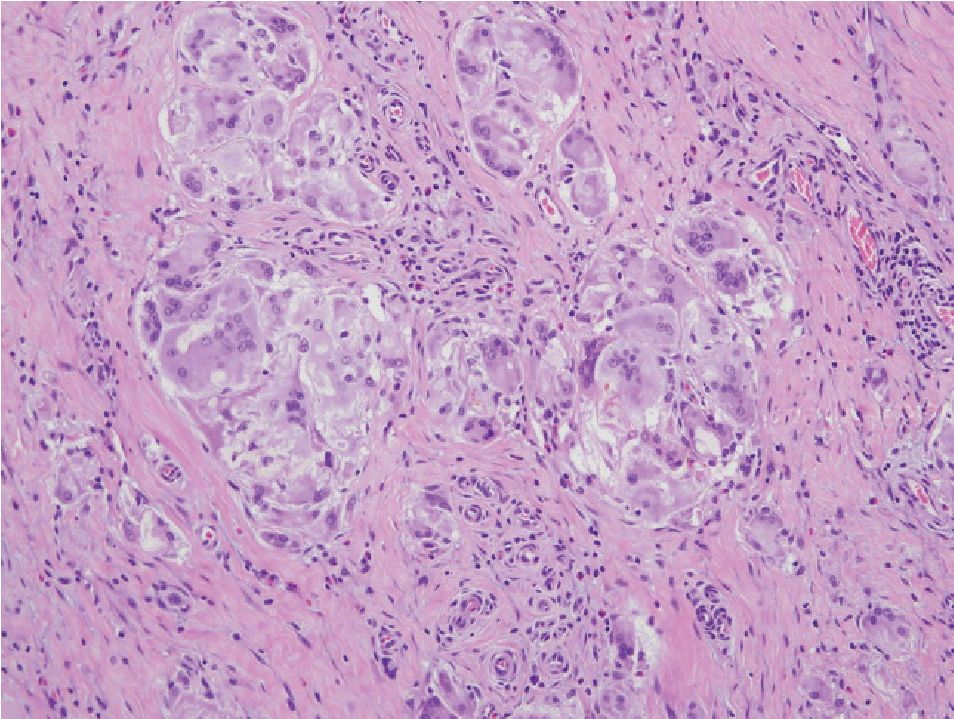 Figure 9 Granulomatous prostatitis showing grouping of macrophages. The presence of other chronic inflam matory cells. Multinucleated giant cells, and, in certain cases, foreign body, will had to recognition of inflammatory process

Figure 10 A) and B) Xanthogranulomatous prostatitis showing mainly foamy macrophages but lacking acinar configuration. Epithelial and histiocyte markers can separate these conditions.

Granulomatous prostatitis (Fig 9) may simulate adenocarcinoma.22 This form of prostatitis may be induced by infection, particularly bacterial and fungal, by surgical procedures or may be idio-pathic.23,24 Xanthogranulomatous prostatitis (Fig 10) is defined as a chronic inflammation with aggregation of lipid-laden histiocytes admixed with other chronic inflammatory, cells of the prostate. It may mimic high-grade adenocarcinoma.25

Figure 11 A) Malakoplakia involving the prostate ( H&E). B) Michaelis-Gutmann’s bodies ( Kossa stain) appearing as brown to black spherical bodies are definite for diagnosis.

Malakoplakia is also a granulomatous inflammation associated with bacterial infection, most commonly caused by E.coli, occasionally occurs in the prostate.26 It is characterized by diffuse sheets of histiocytes admixed with other inflammatory cells, mainly chronic (Fig 11). Early lesion may look like carcinoma. Recognition of this lesion requires pathologist’s awareness since confirmation is simple. Demonstration of Michaelis-Gutmann bodies by von Kossa stain, available in most institutes, is final.

Figure 12 A) Intestinal metaplasia of prostatic acini, resembling Cowper’s gland. No duct is present. B) Intracytoplasmic mucin demonstrated in mucincarmine stain is helpful in diagnosis.

Mucinous metaplasia (Fig 12) is sometimes identified in prostatic biopsy obtained from an atrophic gland.27 It is possible to cause confusion with small acinar carcinoma (the same mechanism that happens to Cowper’s gland). Simple mucicar-mine stain can highlight intracytoplasmic mucin of the acinar metaplastic lining cells, not intraluminal mucin commonly found in prostatic adenocarcino-ma.28

It is important that the surgical pathologists have to pay great attention when facing with prostate needle biopsy. Careful microscopic examination, along with the awareness that many pitfalls exist, will result in a correct diagnosis. They should not hestitate to move to further immunohistochemical study and/or to seek expert consultation since false positive diagnosis, an undesired occurrence, is extremely awful.