The effect of calcitonin upon the proliferation of giant cell tumor; Preliminary of 9 cases

Giant cell tumor is one of the most common primary bone tumors in adult. Current therapy is still curettage and bone graft packing with adjuvant chemical and thermal cautery. However, the rate of recurrence is rather high ranging from 20 to 85 % and many attempts have been made to decrease this rate. Some investigators showed that the cells of giant cell tumor share similarity to osteoclasts in terms of phenotypic expressions and calcitonin receptor. In addition, calcitonin was reported to cause regression and degeneration of this tumor. Our study is aimed to evaluate the effect of calcitonin upon this tumor by comparing the number of positive cells in PCNA staining between pre and post calcitonin administrations. The result revealed significant decrease in number of positive cells after calcitonin given with p<0.001

Giant cell tumor is one of the most common primary bone tumors in adult. Giant cell tumor accounted for 5.12% of primary bone tumors and 22.7% of benign bone tumor [1]. Giant cell tumor at Ramathibodi Hospital, Thailand is 7% of primary bone tumors. It is the second most common bone tumor following osteosarcoma [2]. Current therapy is curettage and bone grafting with adjuvant therapy using chemical or thermal cautery. Even though these types of treatments yielded acceptable result, local recurrences were still a common problem, especially in grade 3 group ( Campanaci grading system ). Local recurrence rate in this grade 3 group was about 20-85%. Radiotherapy has favorable result, but there is a chance of malignant transformation to secondary sarcoma. To our knowledge, chemotherapy or newly developed therapy which can reduce local recurrent rate is still challenging. Calcitonin is peptide hormone, released from parafollicular C-cells of thyroid gland in hypocalcemic state, was known to inhibit bone resorption by inactivating osteoclast and make cell morphologic change and result in loss of cell mobility [3,4,5]. It is our aim to study the effect of calcitonin upon giant cell tumors by using technique of PCNA staining to compare the proliferative activity of cells in giant cell tumor before and after calcitonin treatment.

All cases of giant cell tumor patients at Ramathibodi Hospital during May 1st 2000 and January 30th 2002 were included in this study. The study was approved by hospital ethical committee. All cases were biopsied by our senior orthopaedist and histopathological diagnosis was done by our senior orthopaedic pathologist. After the diagnosis of giant cell tumors was made, patients were given a daily dose of synthetic salmon calcitonin (MiacalcicR ) 100 IU subcutaneously for 14 days. After finishing 14 days of calcitonin administration, patients were performed definitive surgery by the same senior orthopaedist. Types of operation were depend on tumor stagings. The surgical specimens which obtained from first and second operations were submitted to the same pathologist for pathological diagnosis. Immunoperoxidase stainings by using monoclonal antibody PCNA (Immunotech) were performed. The nuclear stainings of epithelial cells of colonic mucosa were used as control. Ten high power fields (40x ) per each slide were randomized, captured and saved by using software Olympus CW 95. Countings of the staining cells were performed by the same investigator and used Soft ware Image Pro Plus which can mark cells that have been counted ( Fig. 1). Cell counting was done by one investigator, whom was blinded for clinical information in every specimen. The measurements for each group of cells were expressed by mean +SD. Comparing proliferative activity of cells between before and after calcitonin administration was performed by using paired t-test 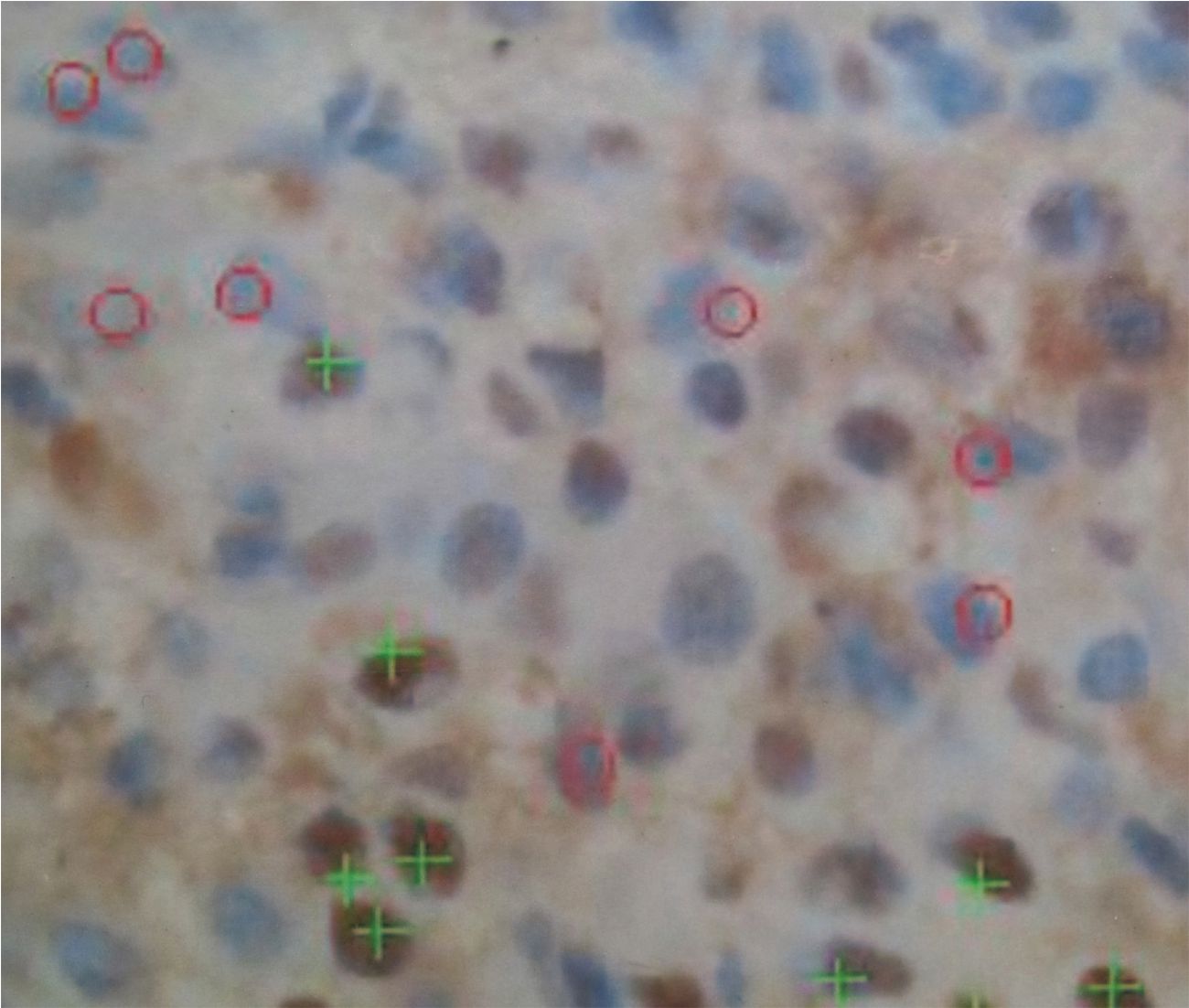 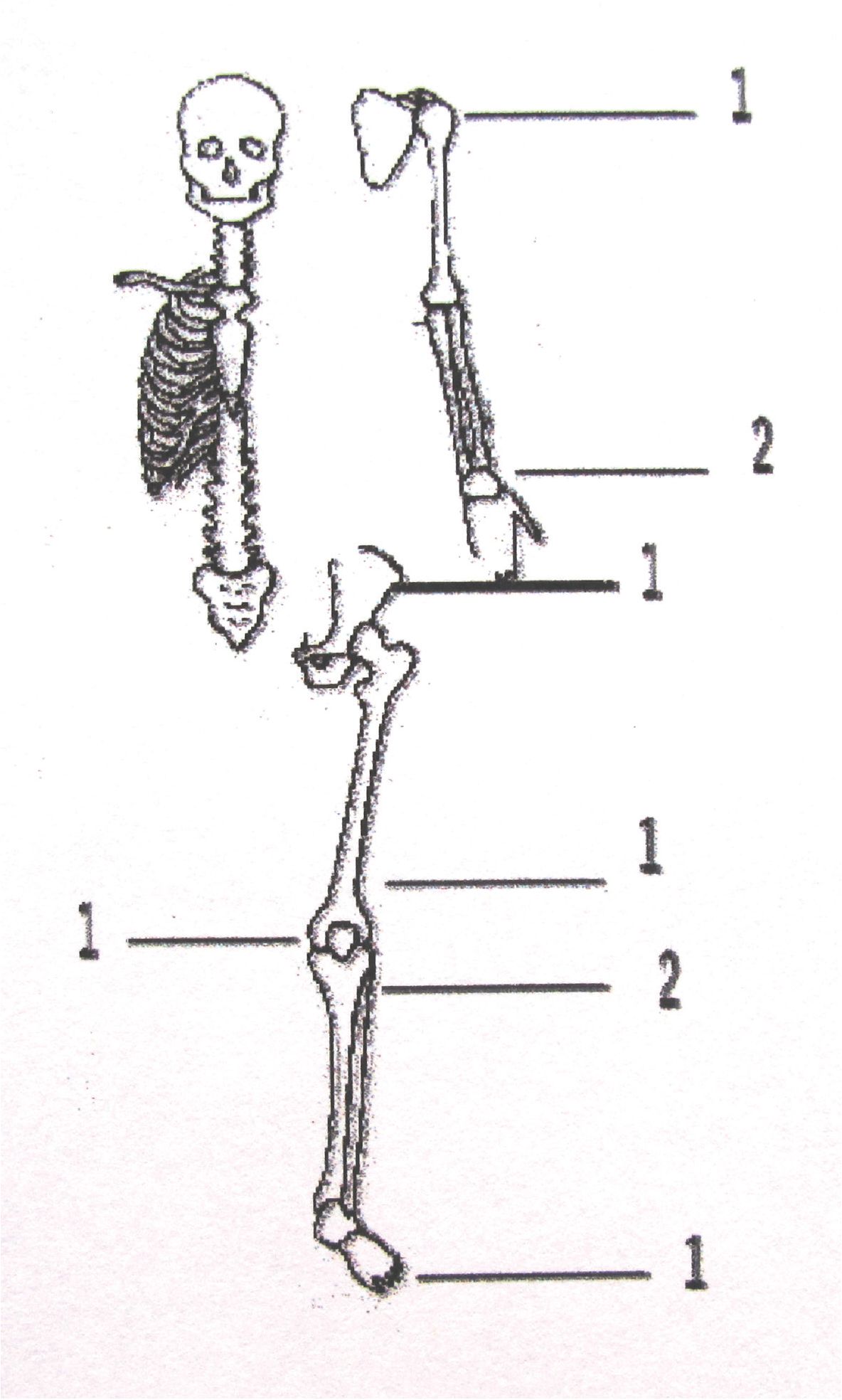 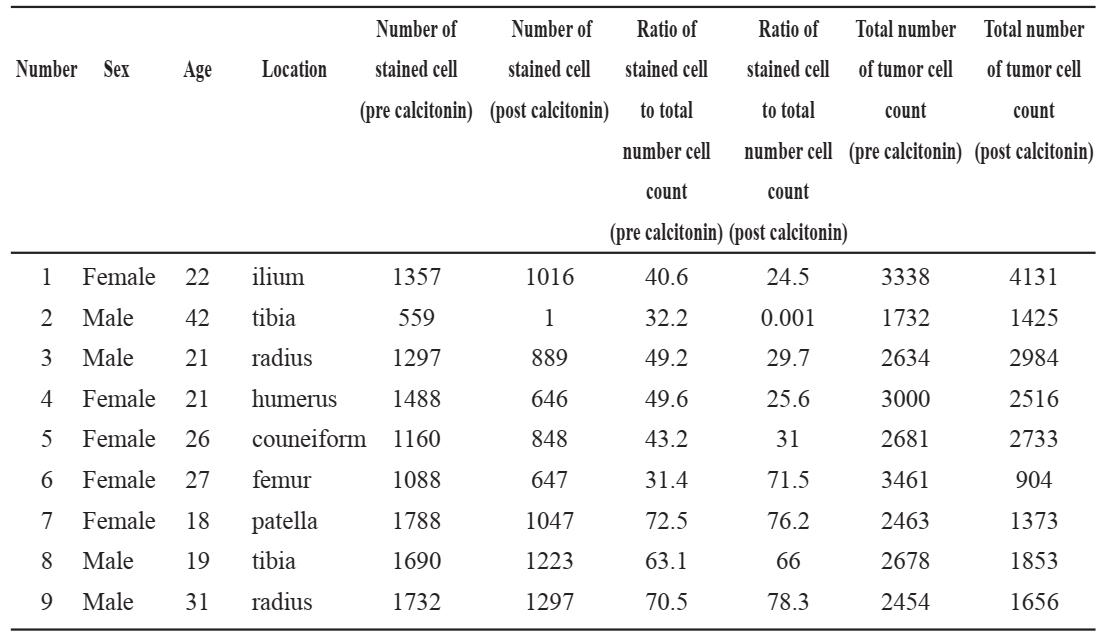 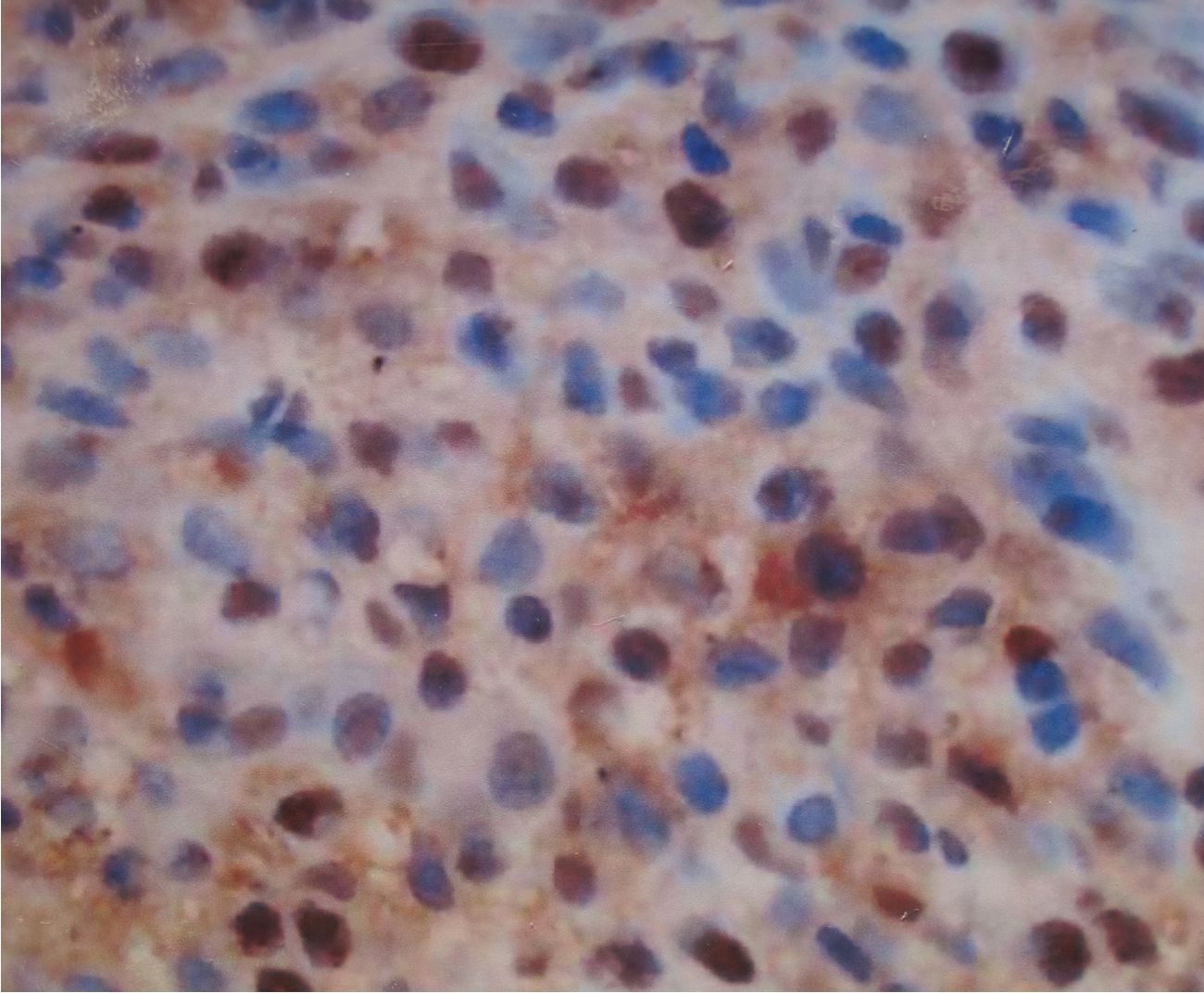 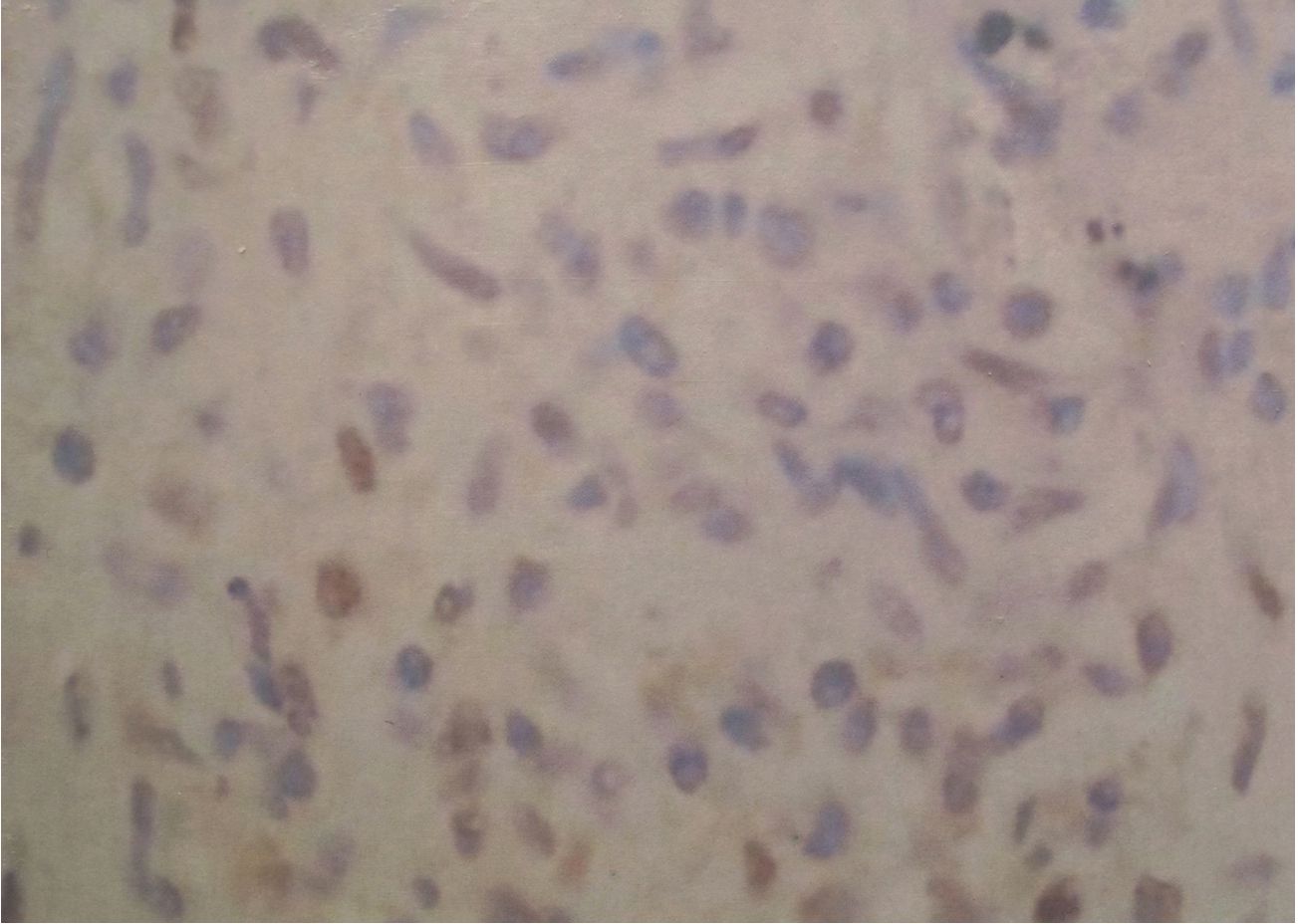 This study is a pilot study and requires further study with increasing more patients. It also requires a longer period of time of follow-up to evaluate tumor local recurrent rate after treatment. However this study clearly showed that mainly spindle tumor cells were affected and decreased proliferation after calcatonin administration, which corresponded with our proposed hypothesis.