Human leucocyte antigen B27 (HLA-B27) is a major histocompatibility complex class 1 molecule that is strongly associated with ankylosing spondylitis. The polymerase chain reaction with sequence specific primers (PCR-SSP) is currently used for the discrimination of HLA-B27 allele types resulting from single base substitutions. However, this technique is a multi-step, time-consuming task and increases the chance of post-PCR contamination. The main objective of this study is to determine the HLA-B27 genotypes using quantitative real-time polymerase chain reaction (Q-PCR) followed by melting curve analysis. Genomic DNA (gDNA) was isolated from 50 outdated peripheral blood samples stored at -20 °C in the Molecular Genetics Laboratory, Department of Pathology, Phramongkutklao College of Medicine, Bangkok, Thailand. These blood specimens were previously collected from 25 patients each who were HLA-B27 negative and positive in PCR-SSP. The genotyping of HLA-B27 was detected in the isolated gDNA by a Q-PCR assay with melting curve analysis. All HLA-B27-positive blood samples yielded either a single peak or double peaks at 87.28 ± 1.36 °C. Only one peak for an endogenous reference gene (human beta-globin gene) was detectable at 84.90 ± 0.09 °C in all HLA-B27-negative blood samples. The Q-PCR followed by melting curve analysis is reliable for the DNA typing of the HLA-B27 alleles and could be used to an alternative to a conventional PCR-SSP method.

Ankylosing spondylitis (AS) is a form of arthritis that effects the spine(1). It causes inflammation of the spinal joints that can lead to severe and chronic pain. Human leukocyte antigen B27 (HLA-B27) is associated with AS, including ocular diseases, rheumatic diseases and inflammatory bowel disease. Approximately 95% of patients with AS have HLA-B27 compared with only 8% of healthy individuals. Several methods have been developed for the identification of the HLA-B27 allele(1), i.e. serology, polymerase chain reaction (PCR), including the standard PCR with sequence-specific primers (SSP). However, PCR is a time-consuming process and also requires post-PCR manual procedures(2). Currently, the application of real-time PCR or quantitative PCR (qPCR) with a double-stranded DNA binding SYBR Green dye has facilitated the rapid detection and amplification of PCR products(3,4). The aim of this study was to develop of the qPCR analysis for HLA-B27 allele test in routine work.

The real-time PCR was performed on qTower3-Real-Time PCR thermocycler (Analytik Jena AG, Germany). A total volume of 12 µL of each mixture consisted of 5 µl of SYBR Green I (EXPRESS SYBR™ GreenER™ qPCR Supermix, universal; Invitrogen, USA); 4 µL of detection mix containing the primer E91S and 136AS specific for HLA-B27, primer BG1 and BG2 specific for ß-globin(3); 1 µL of distilled water; and 2 µl of DNA template. The real-time PCR amplification protocol for this reaction consisted of an initial denaturation step at 95 °C for 5 sec, and 45 cycles of 95 °C for 4 sec, 68 °C for 1 min, 95 °C for 45 sec, 58 °C for 1 sec and final extension at 72 °C for 33 sec. After amplification was complete, a final melting curve analysis (Tm) was followed by the generation of a thermal gradient from 60 °C to 95 °C with a ramp rate of 5 °C/s. HLA-B27 positive samples give a unique melting peak at 87.28 ± 1.36 °C. Therefore, HLA-B27 negative samples showed a single temperature curve at 84.90 ± 0.09 °C representing the ß-globin(5,6). 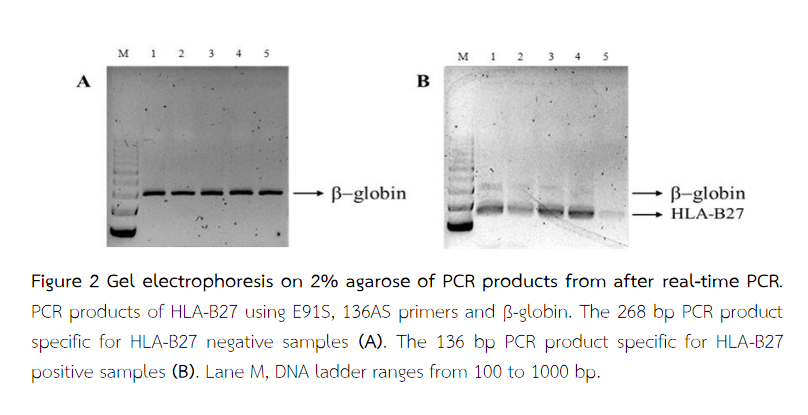 We compared the results of 50 genotyped individual with our previous original PCR method. All genotypes were completely concordant. However, conventional PCR requires post-PCR manipulations that increase the risk of cross-contamination between samples. These post-PCR steps are laborious, especially when large numbers of samples and cost-effective(6,7). Thus, we are starting point for development of a real-time PCR. Real-time PCR is one of the methods used to detect for HLA-B27 allele in patients suspected to have AS and related diseases. Real-time PCR is much more accurate than PCR. Real-time PCR substantially reduced the labor-intensive steps and the total processing time when compared to the usual time required for PCR. It is therefore a suitable in routine laboratory practice(8).

The real-time PCR assay is possibly reliable for the detection of HLA-B27.