Physicians' knowledge, attitude and practices towards autopsy in a Nigerian tertiary hospital

The post-mortem examination is a hospital service necessary to diagnose the cause and circumstances surrounding patients' death. This study assessed the knowledge, attitude and practices of physicians towards autopsy. Descriptive cross-sectional study of physicians that completed a semi-structured questionnaire assessing their knowledge, attitude and practices towards autopsy. Data collected were analysed. A total of 206 physicians participated. Most were young (69.4%), resident doctors (81.6%), in surgical specialties (52.9%) and Christians (72.8%). Majority had good knowledge (91.7%), positive attitude (81.1%) and positive practices (81.6%) of autopsy. Significant variables associated with good autopsy practices include age 35 years and above (OR = 3.23, 95% CI = 1.56-6.67, p = 0.002), Christianity (OR = 4.69, 95% CI = 2.24 – 9.84, p < 0.001) and positive attitude (OR = 21.15, 95% CI = 8.91 – 50.25, p < 0.001). Some physicians had poor knowledge, negative attitude and poor practices to autopsy. These physicians should be targeted in trainings on autopsy practices.

The autopsy or post-mortem examination is the gold standard of unravelling the mysteries about patients' health when fatalities occur(1-3). It involves the systemic dissection of the patient's corpse after death exclusively for medical and medico-legal reasons(4,5). The autopsy is done to establish the cause of death, detecting lesions that were not obvious on clinical examination and investigations, ascertaining the exact progression of the disease, proper staging of diseases such as malignancies, clarifying diagnostic controversies especially when reports of investigations vary and seem to contradict one another and confuse or confound the managing team(6,7). Autopsies also help to resolve relatives' doubts about the management of their deceased loved ones(8,9). Though the benefits of the autopsy seem interminable, there has been reduction in the rates of autopsy request by clinicians worldwide in the last three decade particularly(9-11). Reasons adduced for the decline include the over-reliance of clinicians on the over-hyped versatility of the investigative capacity of the modern sophisticated medical equipment such as computerised axial tomography scanning and medical resonance imaging equipment, the certainty of diagnoses by medical experts, non-assent by relations, religious prejudices and poor communication between the clinicians and the pathologist(12-14). There is also the subtle fear of medical litigations arising from autopsy revelations of misdiagnoses, missed diagnoses, clinical negligence and medical malpractice(15,16). The assumed judicial role by the self-righteous pathologist with inflamed academic pride to criticise and condemn the clinicians has also caused irritable withdrawal by clinicians demonstrated by failure to request for post-mortem examinations even in coroner's cases(16,17). The poor attitude of some pathologists to conduct autopsies with due diligence and generate a post-mortem correspondence to address the reservations of the clinicians has also led to the lack of interest in the autopsy by the clinicians(17,18). The failure of clinicians to request for clinical autopsies has resulted in sharp reductions in the conduct of autopsies by pathologists in many jurisdictions with resultant poor knowledge of the role of post-mortem examination in the care of patients among healthcare providers, undergraduates, physicians in training, postgraduate students of the health professions, young medical specialists and of course has emboldened the ignorance of the lay public(18,19). The result of the reduction in refusing to request, assessing and conducting post-mortem examination is an evidence of the failure of clinical systems pathology(19). Clinical systems pathology enables the rational design and testing of effective personalised predictive medical intervention and preventive measures for optimum patient centered care(20).

This study assessed the knowledge, attitude and practices of physicians working at the Obafemi Awolowo University Teaching Hospital Complex, Ile-Ife, Nigeria to autopsy.

This is a descriptive cross-sectional study of physicians working at the Obafemi Awolowo University Teaching Hospital Complex, Ile-Ife, Nigeria. The hospital has several medical, surgical, laboratory departments including the Department of Morbid Anatomy and Forensic Medicine with full complements for histopathology, toxicology and forensic autopsy including embalmment services. The hospital serves as a referral centre for Osun State and other States in the South western part of Nigeria and beyond.

Inclusion criteria were all physicians working at the various clinical departments including the emergency, clinics and wards.

Exclusion criteria were physicians who did not consent to participate or who were not on duty during the study period.

The sample size of 100 was calculated using an appropriate statistical formula for descriptive health studies [n=Z2pq/d2] with 12.5% physicians previously consented to autopsy and non-responders were taken into consideration(7,21).

Eligible physicians after an informed consent completed a self-administered pretested semi-structured questionnaire that assessed autopsy knowledge, attitude and practices. The physicians were allowed to complete the questionnaire in their spare time at their convenience. Questionnaire information were anonymised.

The ethical approval was obtained from the Ethics and Research Committee of the Obafemi Awolowo University Teaching Hospital Complex, Ile-Ife, Nigeria.

Data obtained were analysed using SPSS version 16. Simple descriptive and inferential statistics were done. Test of significance was conducted using appropriate statistical methods. Bivariate regression analysis was performed to evaluate socio-demographic variables and other variables that are independently associated with good autopsy practices. Odd ratio (OR) and 95% confidence interval (CI) were presented and used as measures of the strength of association. Significant level was put at p < 0.05. 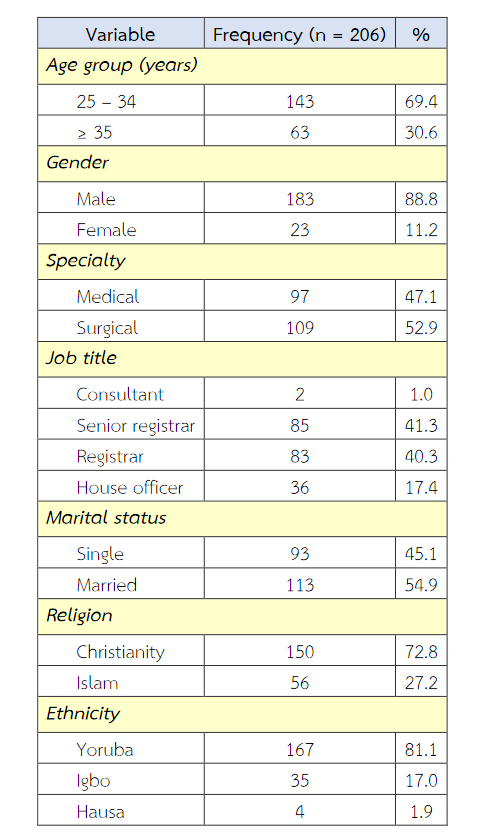 Table 2 reported the knowledge, attitude and practices towards autopsy. Majority had good knowledge (91.7%), positive attitude (81.1%) and good practices (81.6%). All the participants correctly defined autopsy with specific uses identified as medicolegal (87.9%), cause of death (82.5%) and deaths excepted from autopsy including those occurring in suspected haemorrhagic viral diseases (81.6%) and HIV/HBV (80.1%). Majority were willing to consent for autopsy for self (82.0%) and relative (71.8%). Also, majority believed that doctors should observe autopsy (66.0%) and were willing to counsel family to allow autopsy (64.1%). Majority have ever requested for autopsy in line of practice (81.5%), with challenges faced in autopsy request including delay in obtaining family consent (57.2%), or refusal of family in allowing autopsy due to religious practices (23.0%) and cultural belief (19.8%). Suggested solutions to these challenges include Increasing community awareness about autopsy (90.8%) and waived procedural fees when payment is a problem (58.3%). 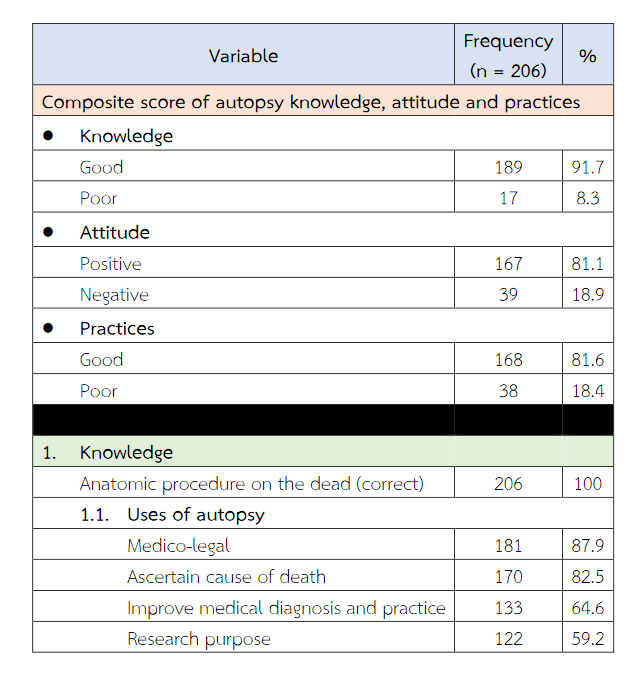 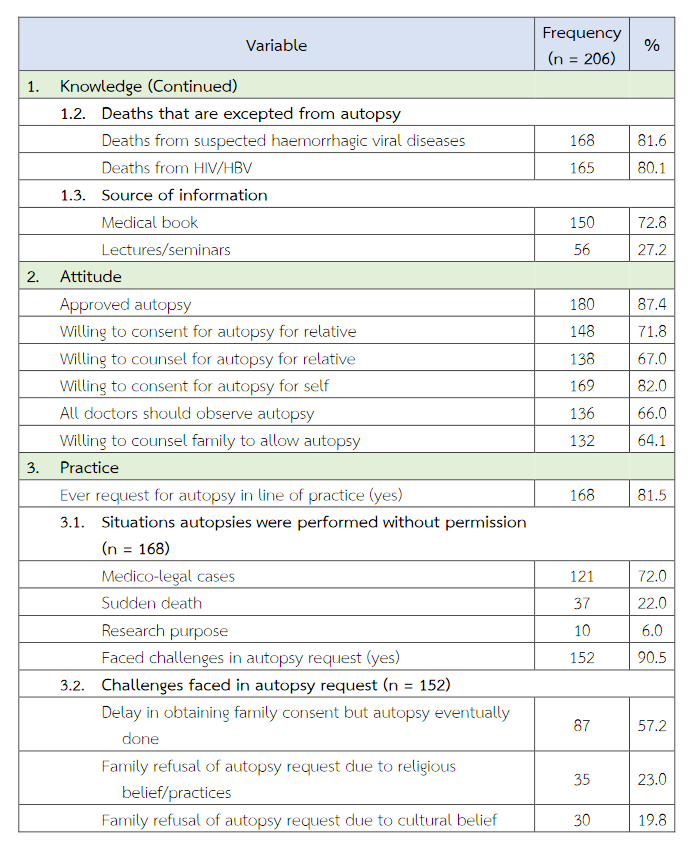 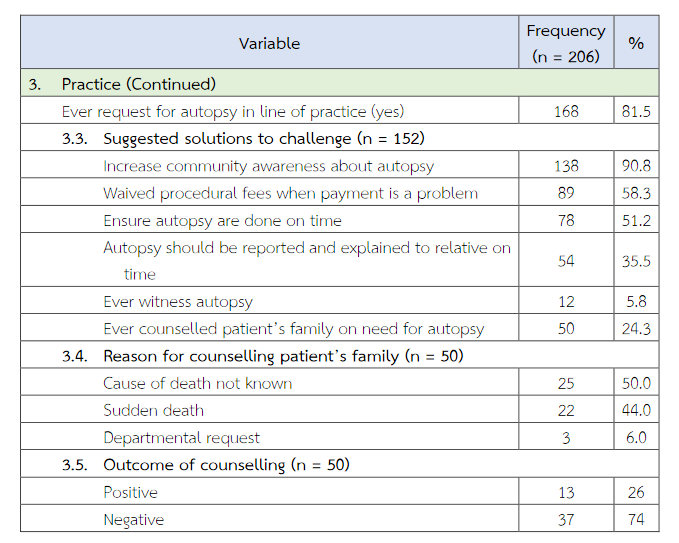 This study assessed the autopsy knowledge, attitude and practices of physicians working in a teaching hospital. This study finding reported that physicians have good knowledge, positive attitude and good practices towards autopsy. This finding differs from recent studies that reported that autopsy is no longer routinely requested by physicians for several reasons which included fears of litigations from family and other aggrieved parties(7-11). However, this study found that autopsy is rather requested for to avoid litigations, ascertain the definitive cause of death and improve medical diagnosis and practice.

Table 3 Bivariate analysis of selected variables and autopsy practices among the study population. 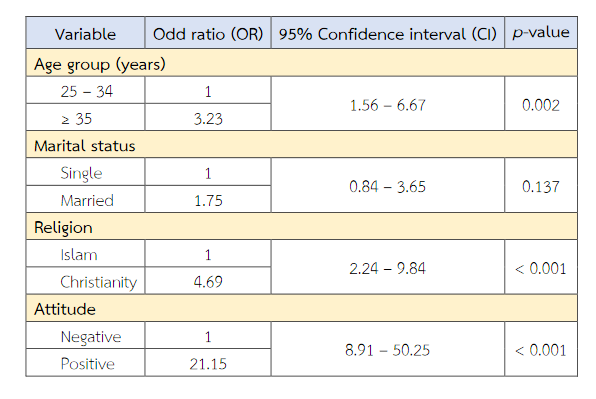 This study reported that deaths from suspected epidemic prone diseases such as haemorrhagic viral diseases are exempted from autopsy follow international practice to reduce the spread of such diseases to these healthcare workers and their close contacts including other patients and family members(22-24).

Also, the study reported that physicians were willing to consent to autopsy for self and relatives. They counsel relatives of dead patients to consent to autopsy so as to improve medical practice. This finding is in contrast with some studies that reported that health workers were averse to autopsy due to litigation fears(23-28). This could be because most deaths in some environment are usually taken to be either Gods wish which cannot be changed or has a diabolical cause or due to the witches and wizards hence the risk of litigation is very low(25-27). However, this spiritual believes and practices of burying the dead immediately by the Islamic faith could be responsible for some physician using religious believe as the basis for not requesting for autopsy or the relatives refusing autopsy(7,13,25).

Also, majority of the physicians believed that doctors should observe autopsy and were willing to counsel family to allow autopsy. A previous study among physicians in Ibadan reported that only 12.5% were willing to observe autopsy which is quite low when compared to our study finding(7). This suggests remarkable positive attitude to autopsy improve with provision of more awareness creation activity.

The factors associated with good autopsy practices include older age, religious belief and having positive attitude to autopsy. The older physicians were more experienced hence were more likely to request and encourage autopsy than younger doctors. Also, the doctors with the Islamic faith when compared to those with Christianity faith tend to resist autopsy because of their religious believes. Previous studies have reported religious objection to be a major hindrance to autopsy (7-9,13).

This study being questionnaire based cross-sectional obtain information whose content may differ from actual behaviour of our respondents. It will be difficult to generalise the study findings as the study was conducted in a site in southwest Nigeria.

Generally, physicians demonstrate good knowledge, positive attitude and good practices towards autopsy. However, some physicians had poor knowledge, negative attitude and poor practices to autopsy. These physicians should be targeted in trainings on autopsy practices. Hospital should have postmortem management committees to train young physicians on counselling skills and counsel relatives of dead patients. Refresher courses on autopsy targeting the consultants will improve training of residents on counselling for the postmortem. The government should also put policies in place that enforces the postmortem examinations especially when the cause of death is unknown especially for coroners' autopsies. Government may also give waivers or subsidise autopsy fess in order to make more people to consent to the procedure.