Breast cancer is a heterogeneous disease. There is a high degree of diversity between and within tumours as well as among cancer-bearing individuals, and all of these factors together determine the risk of disease progression and therapeutic resistance. The significant difference between primary tumour and paired lymph node metastases has been reported to be awareness about tumour heterogeneity to decrease treatment failure rate. The objective of this study was to compare molecular subtypes of primary invasive breast carcinoma and corresponding metastatic carcinoma in axillary lymph nodes by immunohistochemistry. The study subjects consisted of formalin-fixed, paraffin-embedded tissue blocks from 59 patients who was diagnosed primary breast tumour with axillary lymph node metastases. They were assessed for ER, PR, HER2, Ki67, CK5/6, EGFR and p53 immunoexpression. Differences in expression for each of the immunohistochemical markers and molecular phenotypes were analysed. The immunohistochemical markers showed significant concordance in expression of ER, PR, HER2, Ki67, EGFR and p53 (p < 0.05) except for CK5/6 between primary tumour and paired lymph node (s). There was significant concordance in molecular phenotype from the primary tumour compared with the paired lymph node (s) in any subtypes (p < 0.05). In conclusion, the immunohistochemical expression in metastatic lymph node (s) may refer to the similar molecular phenotypes for adjuvant therapy.

Breast cancer is the most common cancer in Thai women with the incidence of 22.8% of new female cancer cases in 2018(1). In addition to pathological grade and stage, breast cancer is routinely assessed for hormone receptor status (oestrogen and progesterone receptors, ER and PR) by immunohistochemistry (IHC) and human epidermal growth factor receptor 2 (HER2) expression by either IHC or in situ hybridisation (ISH). According to DNA microarrays and Gene Expression Profiling (GEP), breast cancer is classified into 5 molecular subtypes, i.e. luminal A, luminal B, HER2-enriched, basal-like and normal breast-like(2). The therapeutic purposes are additionally based on the recognition of intrinsic biological subtypes within the breast cancer spectrum. Thus, 'Luminal A' disease generally requires only endocrine therapy, which also part of the treatment of the 'Luminal B' subtype. Chemotherapy is considered for most patients with 'Luminal B', 'HER2 positive', and 'Triple negative (ductal)' diseases, with the addition of trastuzumab in 'HER2 positive' cancer(3). However, 60% of patients have no benefit from endocrine therapies, and only 30 – 40% of patients receiving trastuzumab get benefit(4,5). The basal-like subtype is most commonly revealed as triple negativity for immunoexpression of myoepithelial markers such as CK 5/6 and also overexpression of epidermal growth factor receptor (EGFR) which has no targeted therapy in the present time(6). In addition, breast cancer with p53 expression has been reported to be associated with poor prognosis(7). Therapeutic decision is based on the molecular pathology of the core biopsy or resection specimen of the primary tumour. The immunoexpression of the primary cancer tissue is assumed to be identical with the corresponding metastatic lymph node (s). If immunoexpression in metastatic lymph nodes differs from the primary tumor, this might be an important reason of treatment failure. As the hypothesis, breast cancer is a heterogeneous disease. There is a high degree of diversity between and within tumours as well as among cancer-bearing individuals, and all of these factors together determine the risk of disease progression and therapeutic resistance(8). Since the immunohistochemical expression in the primary tumour is significantly different from its paired lymph node metastases(9-12), the aim of this study was to compare the molecular subtypes of primary invasive breast carcinoma with metastatic carcinoma in the corresponding axillary lymph nodes by immunohistochemistry.

The formalin-fixed, paraffin-embedded (FFPE) tissue blocks from 59 patients with primary breast cancer stored in the Army Institute of Pathology, Bangkok, Thailand were recruited in this study. The breast cancer tissues were diagnosed between 2009 and 2018 and already had their ER, PR, HER2 and Ki67 immunostainings. The selective criteria included infiltrating ductal carcinoma (IDC) of no special type (NST) of the breast with metastasis to axillary lymph node (s). The characteristics of 59 breast cancer samples are shown in Table 1. 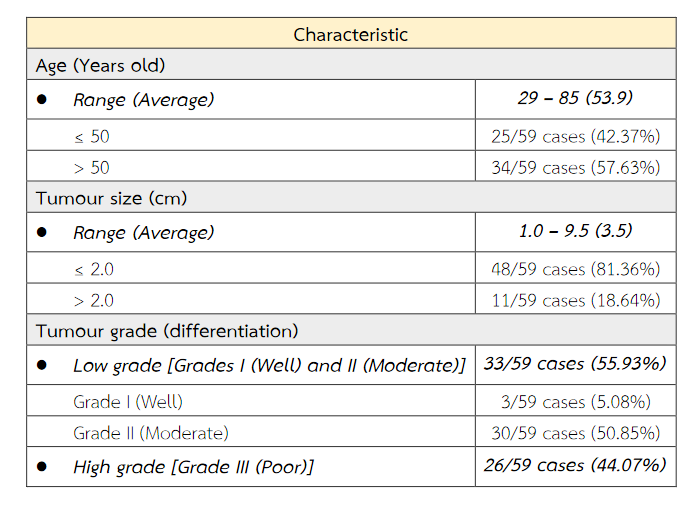 Evaluation of tumour grade and IHC:

An anatomical pathology resident and three Thai board-certified pathologists assessed tumour grade in primary breast tumour and immunohistochemical expression of ER, PR, HER2, Ki67, CK5/6, EGFR and p53 in cancer cells of both primary breast tumour and corresponding metastatic axillary lymph node tissues. The Nottingham combined histologic grade (NCHG) system (Elston-Ellis modification of Scarff-Bloom-Richardson grading system) was used for evaluating tumour grade. Expressions of ER and PR were determined by Allred (quick) scoring(13). HER2 expression was scored as the followings: 0/1+ is negative; 2+ is equivocal; and 3+ is positive(14). Immunoexpression of Ki67 was categorised as low (< 20%) and high (≥ 20%)(15). Expressions of CK5/6(16,17) and EGFR(18) were positive if there was cytoplasmic membrane staining greater than 10% of the cancer cells. For p53 expression, the positive result was nuclear immunostaining at least 10% of the cancer cells(19).

Evaluation of tumour grade and IHC:

The molecular phenotypes were classified into 5 categories, i.e. luminal A, luminal B, Her2-enriched, basal-like and normal breast –like (Table 2)(20).

The immunohistochemical expressions of ER, PR, HER2, KI67, CK5/6, EGFR and p53 and the molecular subtypes were analysed in the primary breast cancer tissues and their corresponding metastatic axillary lymph nodes at the 95% confidence interval (CI).

Fifty-nine patients were included within this study. The patient's age ranged from 29 to 85. An average age was about 54 years old. The tumor ranged in size from 1 cm to 9.5 cm. There was an average tumour size of 3.5 cm. The majority of histologic tumour grades were grade II breast cancer obtaining from 30 patients (50.85%). The immunohistochemical expressions of ER, PR, HER2, Ki67, EGFR and p53 of primary tumour cells were significantly concordant with these immunoexpressions of metastatic cancer cells in paired axillary lymph node (p < 0.05). The expression of CK5/6 of primary tumour cells does not correspond with its expression of metastatic cancer cells (p = 0.219) (Table 3). The molecular subtypes of primary breast cancer were in agreement with that of metastatic cancers (p < 0.05) (Table 4).

It is well established that there is heterogeneous expression of molecular phenotypes in breast cancer patients. According to the hypothesis that metastatic heterogeneity described about cells with different metastatic properties have been isolated from the same parent tumour by the role of clonal selection during the process of metastasis supported by studies in which individual cells were tagged by unique markers allowing them to be tracked(8,21). However, our results were not support this hypothesis but revealed significant concordance of ER, PR, HER2, Ki67, EGFR and p53 immunoexpression between primary tumours and corresponding nodal metastases. This was in agreement with the previous studies(22-25).

Since we found immunoexpressions of ER, PR, HER2, Ki67, EGFR and p53 were able to evaluate in paired axillary lymph node (s), the assessment receptor expression may reflect or predict response in corresponding lymph node(s)(10). However, changes in CK 5/6 expression was detected in minority cases of paired lymph node (s). Therefore, a decision about adjuvant therapy was possibly impacted by the difference in immunoreactivity-based molecular subtypes between primary invasive breast cancer and metastatic carcinoma in corresponding axillary lymph node. 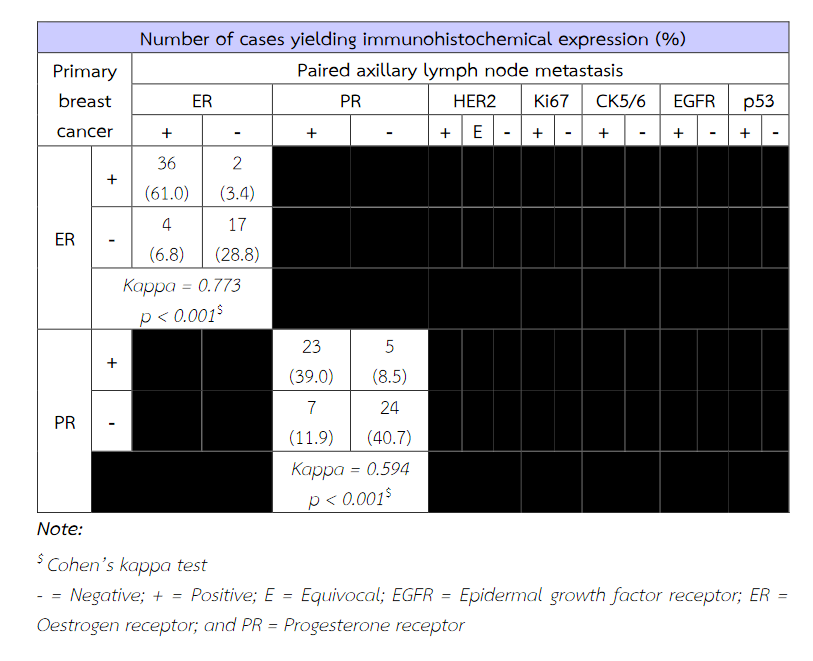 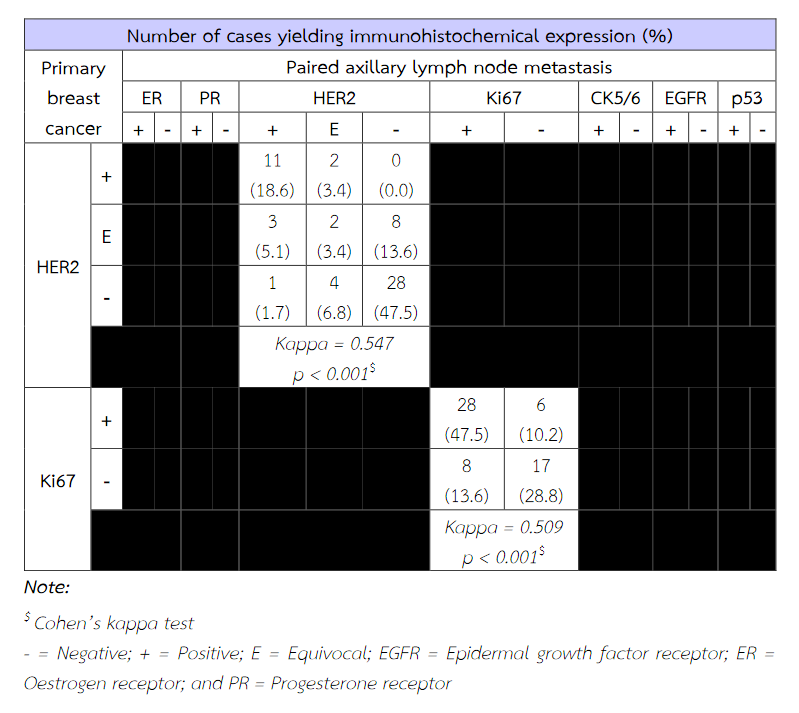 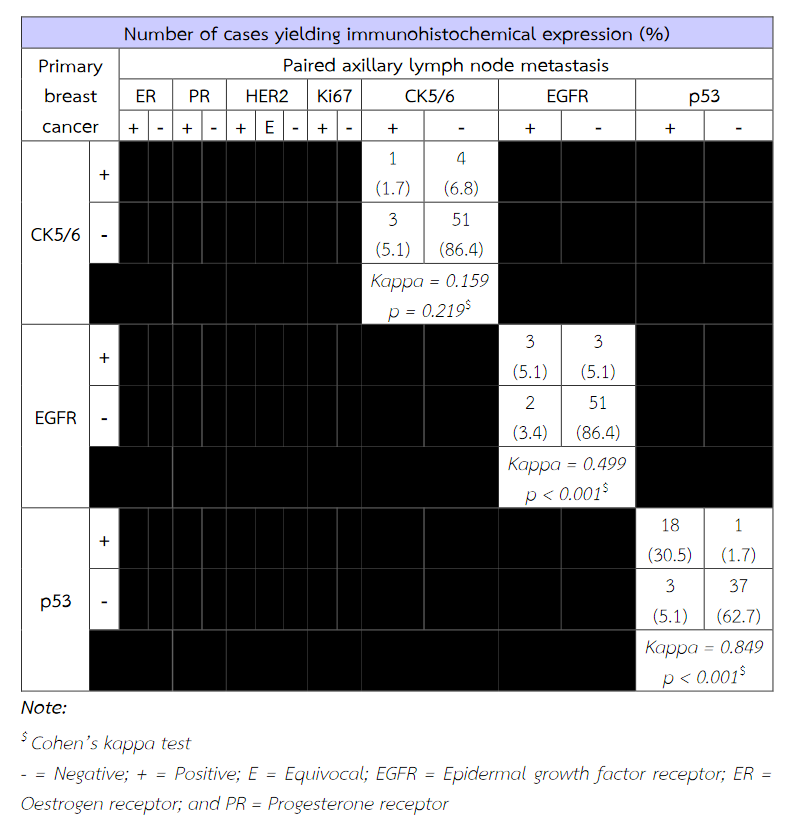 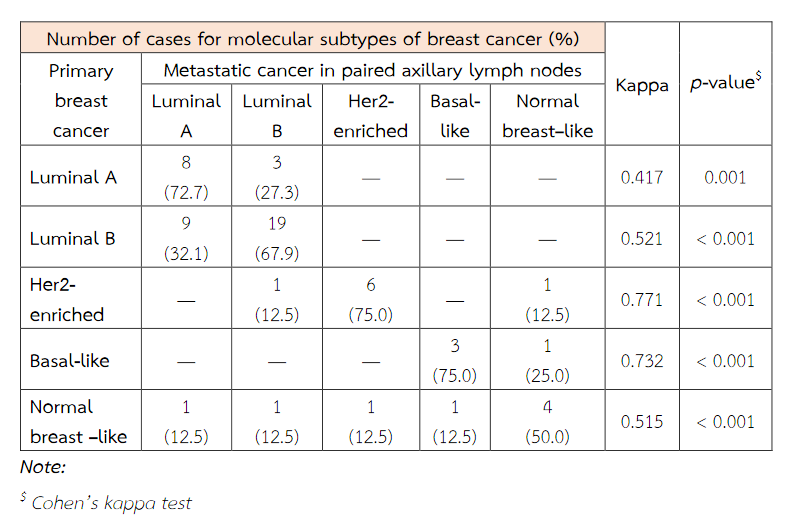 Based on the immunohistochemical expressions of ER, PR, HER2, Ki67, EGFR and P53, the molecular subtypes of primary breast cancer are in agreement with the molecular classification of metastatic carcinoma in corresponding axillary lymph node (s).