Comparison between unbuffered and buffered formalin fixatives for oestrogen receptor and Ki67 immunostains in breast cancer specimens: a pilot study

Pre-analytic steps are important for the immunohistochemical study as in the case of breast cancers. The initial process is the fixation in which the 10% neutral buffered formalin (NBF) is recommended. 10% formalin is less expensive and easier to prepare but its effect on the immunostaining is controversial. The aim of this study was to compare the effect of 10% formalin with 10% NBF on oestrogen receptor (ER) and Ki67 immunostains in breast cancer specimens. Thirty breast cancer specimens were collected. Each tumour was bisected and separately fixed in 10% formalin and 10% NBF, processed, and immunostained with ER and Ki67. Whole slides were scanned and evaluated by digital image analysis. A semiquantitative H-score was determined. No significant differences, both the percentage and H-score, of the ER- and Ki67-positive cells were found between breast cancer specimens fixed in 10% formalin and 10% NBF. In conclusion, 10% formalin could be used as a fixative for immunohistochemical study for breast biomarkers. The unbuffered fixative is less expensive and easier to prepare, compared to 10% neutral buffered formalin. Additional study is reasonable to evaluate the effect of 10% formalin to the quality of nucleic acid.

Breast cancer is one of the leading cancers in Thailand, with the highest incidence among cancers in women(1-3). During 2013 – 2015, the age-standardised incidence rate (ASR) of breast cancer was 31.4 per 100,000 in Thai women(1). Like many other malignancies, breast cancer is not a single disease as it can be categorised into luminal A, luminal B, HER2/Neu-overexpression, and basal-like subtypes(4). College of American Pathologists (CAP)/American Society of Clinical Oncology (ASCO) guidelines recommend oestrogen receptor (ER), progesterone receptor (PR) and HER2/neu (HER2) analysis for all new diagnoses of breast cancer. In routine practice, all breast cancer specimens in Thailand are subject to immunohistochemical study for evaluation of ER, PR, HER2 and Ki67. These biomarkers have long been used to select an appropriate treatment for an individual patient(4,5). ER and PR are the prognostic factors and predictive for the benefit with the endocrine treatment(6).

Pre-analytic process is especially important to ensure the good immunohistochemistry result, and fixation is one of the crucial steps. While 10% Neutral buffered formalin (NBF) is recommended(7-9), some laboratories in Thailand - a middle-income country - still use 10% formalin as it is much less expensive. In addition, 10% formalin is easily prepared by only adding nine parts of water, preferably distilled, to one part of the stock formalin. This is in contrast with the preparation of 10% NBF that needs buffer, typically sodium phosphate, to adjust the pH(10).

Although 10% formalin and 10% NBF have been compared as fixatives; for example, Arima et al. found Ki67 was significantly higher when 10% NBF was used(11), the Ki67 was scored by manual counting in the hot spots without the use of digital image analysis (DIA). The purpose of our study was to re-evaluate the effect of 10% formalin on breast cancer biomarkers, using ER and Ki67 as a model, and compare the results with those obtained from 10% NBF fixative. DIA was used for the objective scoring. This study was approved by the Institutional Review Board at the Faculty of Medicine, Chulalongkorn University (IRB # 132/64).

10% formalin was prepared weekly by dissolving 100 mL of commercially available formalin (100% formalin, TOA Dovechem Industries Co.,Ltd., Bangkok, Thailand) in 900 mL of distilled water. 10 % formalin was prepared fresh from stock solutions before use every week. 10% NBF (Bio-Optica Milano S.p.A., Milan, Italy) was purchased in a ready-to-use form. The pH level of 10% formalin and 10% NBF was 5 and 7, respectively (measured by Litmus paper). All fixatives were precautionarily stored and used at room temperature.

Thirty fresh specimens of the breast cancer were received from the Department of Surgery, King Chulalongkorn Hospital. Cold ischaemia time is less than one hour. For each case, the tumour was cut into two pieces (less than 5 mm in thickness). One half was immediately fixed in 10% formalin, and the other half in 10% NBF for 24 – 48 hours. The 1:15 ratio of tissue volume to formalin volume was used. After fixation, both halves of the tumour were routinely processed and embedded in the same paraffin block. 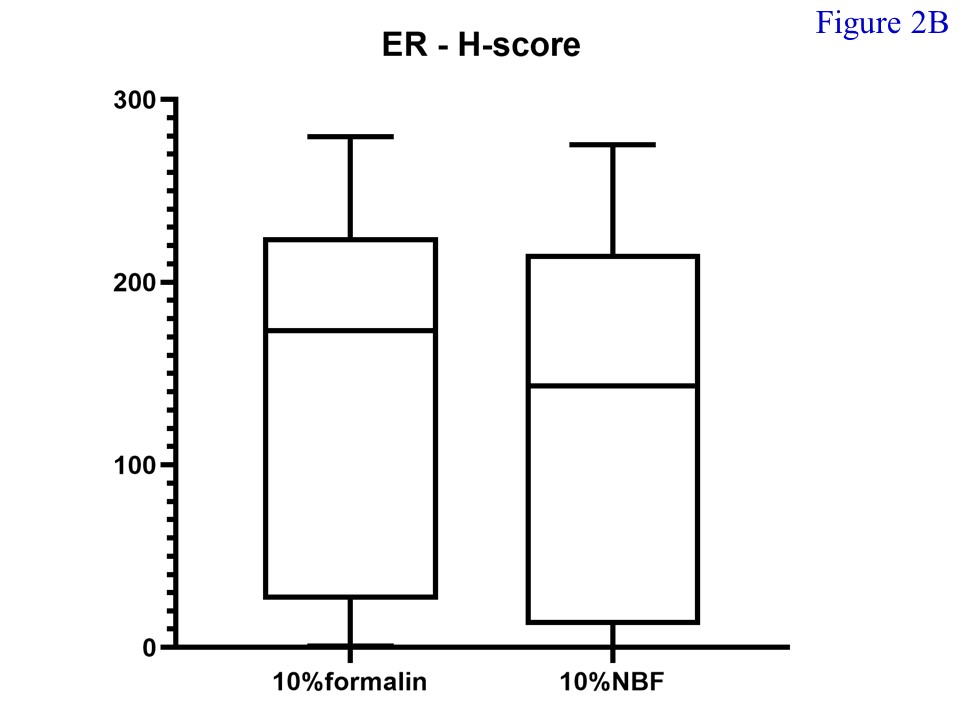 Figure 2 Percentages (A) and H-Score (B) of ER-positive cells. There was no significant difference noted between samples fixed with 10% formalin and 10% neutral buffered formalin (p = 0.848 and 0.734, respectively). 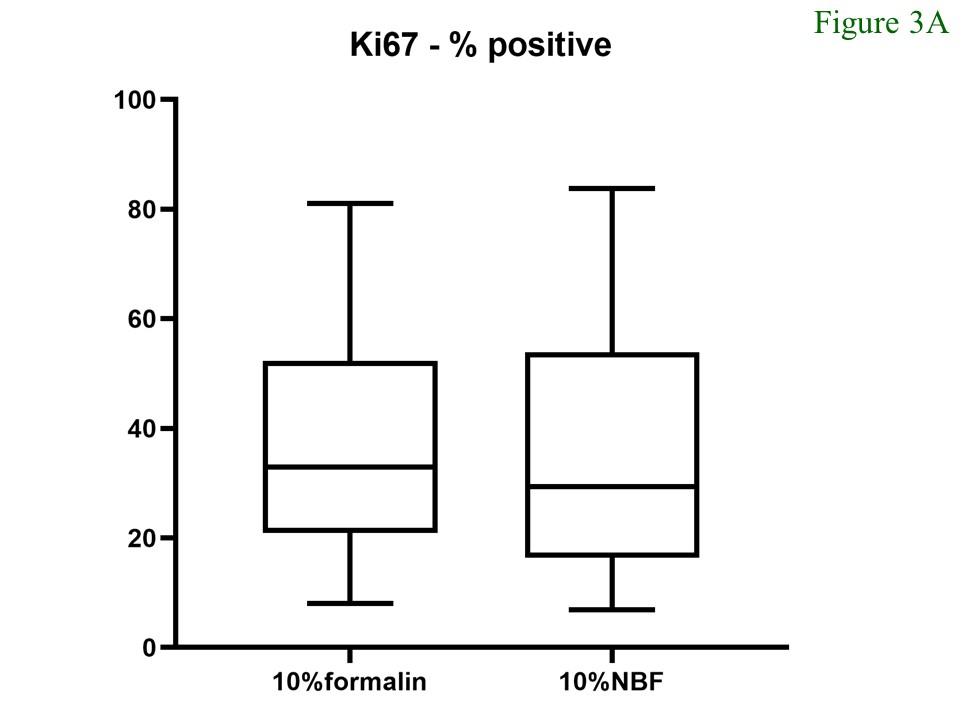 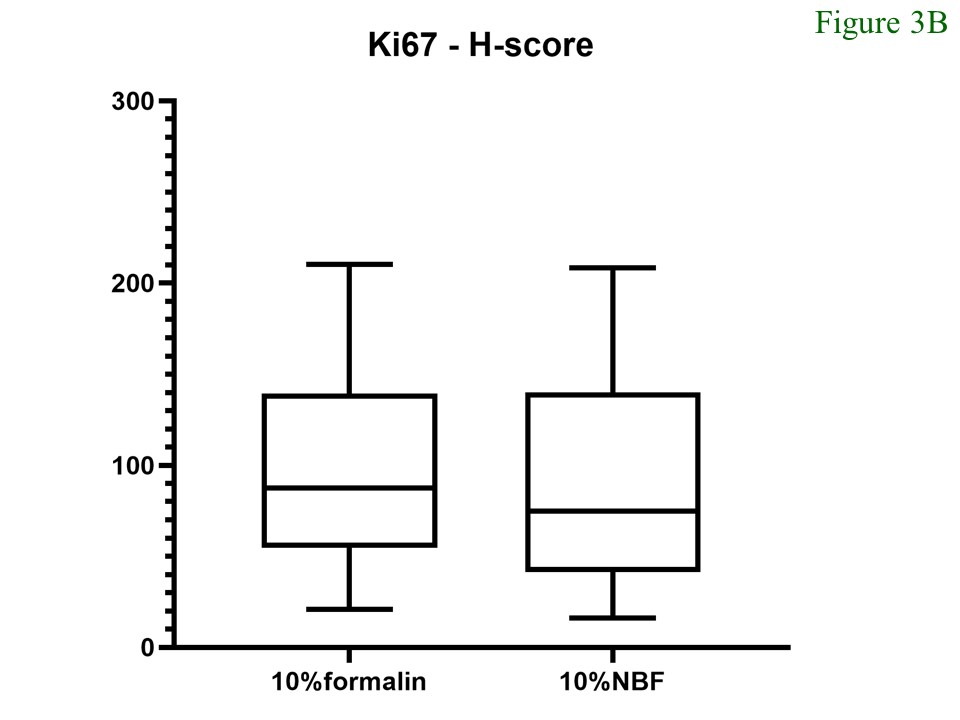 Figure 3 Percentages (A) and H-Score (B) of Ki67-positive cells. There was no significant difference noted between samples fixed with 10% formalin and 10% neutral buffered formalin (p = 0.478 and 0.525, respectively).

Evaluation of breast biomarkers is essentially important to select an appropriate treatment for the patients. Although the immunohistochemical method has remarkably been improved, with the use of automated immunostainers, pre-analytic steps such as cold ischaemic time (time to fixation), fixative (solution that prevents autolysis), fixation time (duration of fixation), are still vital to ensure the reliable results. Improper pre-analytic steps can significantly affect treatment decisions(12). These pre-analytic factors have been studied quite extensively in breast cancer biomarkers(13-19). The recommended cold ischaemic time and fixation time are as soon as possible (or less than one hour) and 6 – 72 hours, respectively, according to the American Society of Clinical Oncology (ASCO)/College of American Pathologists (CAP) 2020(7,24).

Formalin is a universal fixative in surgical pathology, and the volume of fixative should be sufficient or 20 times the volume of tissue(7,8). 10% buffered neutral formalin (BNF), pH (7.2 – 7.4), is recommended since both acidity or alkalinity can interfere with the fixation process(7,20). Compared to 10% NBF (130.80 Bahts/litre), 10% formalin (2.75 Bahts/litre) is much less expensive and easier to prepare but the latter is usually acid (pH = 5.0 to 5.5). Because of the cost and preparation process, 10% formalin is still used in some pathology laboratories. Differences between 10% NBF and 10% formalin on the performance of immunostaining are somewhat controversial. Unbuffered formalin was said to be a better fixative for the immunorecognition of many antigens(21).

Matsuda et al. studied formalin-fixed paraffin-embedded tissue of nude mice implanted with human uterine cervical cancer cells using immunostains and image analysis on limited microscopic fields(22). Compared to specimens fixed with 10% NBF, Ki-67 stain performed in samples with unbuffered formalin showed slightly higher expression. However, no statistical analysis was conducted in this study. Without image analysis, Burns JA et al. noted slightly higher staining intensities of HER2 in cancer tissue fixed with 10% NBF, compared to those prior fixed with unbuffered formalin although this did not reach the statistical significance(23).

The methods used for counting (manual vs. digital image analysis) may have accounted for the discrepancy. Digital image analysis (DIA) has been shown to be superior alternative to the manual biomarker scoring(24). Stålhammar et al. demonstrated that the DIA of Ki67 in hot spots was better than manual Ki67 counts in breast cancers(25). In our study of ER and Ki67 scoring using DIA, we were not able to show significant differences between breast cancer specimens fixed with 10% NBF and 10% formalin.

It should be noted that prolonged storage of unbuffered formalin may induce precipitation of white para-formaldehyde deposits and produce turbidity. Traces of formic acid are formed by oxidation, which decreases the quality of nuclear staining and leaches out haemosiderin resulting in formation of brown-black pigment called formalin pigment(26). To avoid prolonged storage of formalin, 10% formalin solution should be regularly prepared (e.g., weakly). NBF has a longer shelf life(23) and the tissue fixed with NBF has been shown to have better RNA quality(27,28). In our study, 10% formalin was freshly prepared every week. 10% NBF was shortly stored too. This is the possible explanation that 10% formalin seemed to be consistently superior to 10% NBF through not statically different.

PR and HER2 stains were not included in our study, further studies of these stains are considered. Whole tumour areas were analysed but more sample sizes may show the difference of the results. The aim of this study is the comparison of preserved antigenicity between unbuffered and buffered formalin, dividing the group of high and low ER and Ki67 expression may not be significant differences between groups. Since the molecular testing is increasingly needed, further studies are warranted to determine the effect of 10% formalin on the quality of nucleic acid.

10% formalin could be used as a fixative for immunohistochemical study for breast biomarkers. The unbuffered fixative is less expensive and easier to prepare, compared to 10% neutral buffered formalin. Additional study is reasonable to evaluate the effect of 10% formalin to the quality of nucleic acid.