Objective: This study would like to to show an easy and effective way (method) for sperm extraction. The method could be used as basic extraction of sperm from absorbed material; such as swab, cotton or filter paper. Materials and Methods: Filter paper even staining with seminal fluid was cut (punch) for equal pieces and provided for testing in two major parts, the first part for evaluation of optimal time of extraction by mixer and the second part for comparing between shaking method and conventional method. The easy way of the experiment has been use the filter paper staining with semen and punching in equal pieces, then, the pieces of filter papers have been tested step by step for the objective.

Results: The results showed that the shaking method for extracting sperm from materials such as swab or filter paper is significantly better than conventional method (p<0.05). The optimal time for shaking by mixer was three minutes at 1,000 rpm.

Rape is the most common sexual assault case in Thailand. The sexual events appear almost daily in newspapers [1-9]and reports are increasing. The rapists found as the perpetrators, rapists, were the persons close to the victims such as father, brother, brother-in-law or uncle[10-13]. When such cases present in our society, the victims complaint the matter to the police at police station[14]. The police sent the victims to hospital for physical examination including collecting evidences of sexual assault from them. Then, the police would interview the physician who has examined the victim and asked for medical report. Before going to the police, some victims might have come to see physicians by themselves in order to be examined and a few were brought by their father, mother or par-ents[15-17]. Some victims go to see the physician in hospital because of complications from the raping such as bleeding or infection.

As the medico-legal aspect, patients who have been raped or suspected to have been raped and taken or sent to hospital by the police, their parents or themselves must be managed as emergency cases. The physical examination and collecting evidence from the victim must be done urgently[17-22] in order to prevent the loss of sexual evidence or sexual acting, including semen in the vagina and stains on the body of the victim. For principle of evidence, the latter is collected, the less is found. A vaginal swab and smear should be done and collected in suspected rape victims must be sent rapidly to a laboratory center which have appropriated facilitaties and materials for analysis of the samples [ 15,16]

Sperm found on vaginal swab or smear of the victims is important evidence in sexual relationship or rape cases [19]. Although, the finding of sperm in the vagina is not confirmed for the sexual intercourse because it may present by syringe injection. However, the sperm injection by using a syringe is unlikely and impossible for victims in Thailand. Moreover, the DNA analysis for the sperm owner is complicated and expensive[23-25]. So in Thailand, the finding of sperm and seminal chemical component[26-34] from swab and smear, together with witnesses, other material evidences and other environmental evidence are convincing evidence of being raped.

Because of the importance of sperm as sexual evidence in rape cases, so we should concentrate to the sperm extraction. There are many methods of sperm extraction in laboratory centers in Thailand, such as by using 1) distilled water 2) normal saline solution[35] 3) detergent[36] 4)1-5% ammonium hydroxide solution[37] and 5) adhesive tape[38-40].The disadvantages of these methods include: time consuming (some methods require more than 24 hours or overnight), complicated and incomplete extraction, may be unsuitable for routine work. So, the researchers would like to find a new easy method for more complete, quick, efficient and economical sperm extraction than the routine methods. We found that a shaking method, using a mixer[42] is suitable for this purpose. Moreover, this method can be used for emergency sperm analysis. This research improves on previous method of extraction[41] detergent method[36], adhesive tape[38] and alkaline methods[34].

This research is an analytical-crossectional study [43,44]. The main objective of the research is to compare the sperm extracting by the shaking method, using a mixer, with the conventional method using only detergent, stock solution. The research was done at two places as follows 1) laboratory rooms of Forensic Medicine Department, Faculty of Medicine Siriraj Hospital, Mahidol University and 2) laboratory room of Vachira Hospital. There were 3,200 pieces of punched filter paper in this study.

1.    Filter paper, Whatman No 1, stained with semen of author

The method was divided into three steps as follows 1) preparing and testing the samples 2) analysis of raw data and 3) summarizing and writing.

Part I: (Evaluation of optimal time of shaking)

The dry filter paper stained with semen was punched in straight line from left to right side by a puncher to control the size of 0.5 cm. diameter, until ten pieces of punched paper were collected. All of ten pieces of punched paper were assumed to have similar properties and seminal components, called one sample set, divided into five portions. Each portion, composed of two pieces of punched paper, was put into 5 ml. test tubes. Five drops of stock solution were dropped into each test tube. The test tubes were shaken by mixer at 1,000 rpm. (medium rate of vibrating) for 1, 2, 3, 4 and 5 minutes respectively. Pieces of residual filter paper were removed by each clean glass rod at the end of1, 2, 3, 4 and 5 minutes. Then, the five test tubes were turned by centifuge at routine speed of 1,000 rpm. for three minutes. The supernatant from each tube was poured out and the last drop of residue was stained over glass slides one by one. The five dried slides, leaving in room air, were stained by routine process of the Heamatoxyllin and Eosin method[29]. Then, the slides were mounted by permount. Sperm was identified under the microscope, using high power field (40X). The sperm counts were performed on three high power fields and the average of these were recorded as the raw data. There were 200 sample sets (2,000 pieces) in this testing part.

The routine detergent stock solution was prepared by dissolving 1 gm. of detergent, registered trade mark of “Pao”, in 100 ml. of normal saline solution (NSS) and filtered through filter paper. Then, it was kept in a brown glass bottle in room temperature.

The dry filter paper stained with semen was punched in straight line from left to right side by a puncher to control the size, shape and quality of samples until four pieces of punched paper was collected. All four pieces of punched paper were assumed to have similar property and seminal components, called one sample set, divided into two portions. Each portion consisting of two pieces of punched paper was put into a 5 ml. test tube. Then, one portion was extracted as described in Part I at three minutes shaking duration which is the optimum time for extraction determined by the observation in Part I of the study and the other portion was extracted by the conventional method, leaving overnight the sample in 5 ml. test tube containing stock solution, routinely used in the evidence unit of the Faculty of Medicine Siriraj Hospital. The extraction products of both portions were stained, counted and recorded as in Part I. There were 300 sample sets (1,200 pieces) in this testing part.

Analysis and comparison of the raw data to determine the best time for extraction by mixer was done by using the SPSS for Window.

The analysis of the raw data to compare two extraction methods, the conventional method and shaking method using mixer, was done by using the SPSS for Window (license). The results are shown as following below.

The results may be summarized as followings:

1.    The mean quantity of sperm extracted in one minute, from Table 1, was markedly different from those extracted in 2, 3, 4 and 5 minutes. So, we couldn’t use one minute as optimal time for testing.

Table 1. The number of sperms extracted by mixer at various time (minutes) 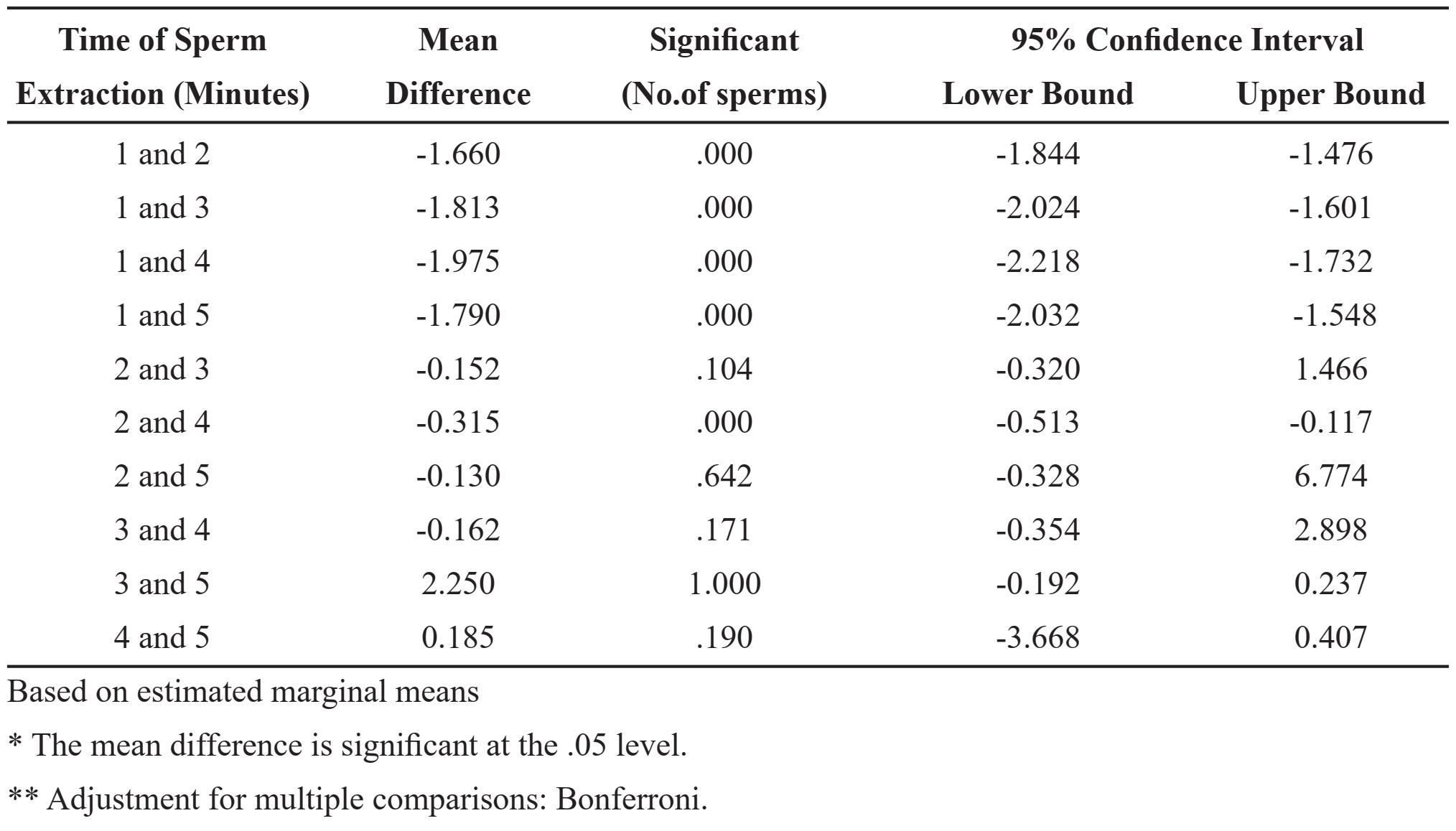 Table 3.    Comparison of number of sperms extracted by the shaking method (three minutes shaking at 1,000 rpm.) with conventional method

The result of the experiment has been discussed and written as shown in below contents.

Sperm from the collecting material, filter paper swabbed from vaginal area in sexually assaulted victims, is very important evidence in criminal procedure against the perpetrator(s). We have tried to find out the best efficient and effective method for extracting sperm from absorbed materials such as swabs for the avove reason. The experiment revealed that the shaking method using a mixer has been effective than the conventional method.

The further process, the mean number of sperm extracted by the two methods, conventional and shaking methods at three minutes, were 7.08 and 7.70 respectively. The distribution of both data groups tested by statistic, Komogorov-Smirnov Test, didn't show normal distribution (p<.001). So, the non-parametric test was to be used. The comparison between the mean number of sperm extracted by both methods showed statistically significant difference (p<.001, as shown by Wilcoxon Signed Ranks Test, table 3). It has shown that the extraction by shaking method was better than conventional method. Therefore, the idea that the conventional method could be the gold standard for sperm extraction from absorbed material is challenged. It is suggested that the shaking method can be used as a routine forensic laboratory instead of the simple conventional method.

The sperm extracted from filtered paper stained with seminal fluid, using by shaking method for three minutes, is 1) efficient and easy 2) saves time and cost. This method is better than the conventional method which is used as a routine process in the laboratory of Forensic Medicine Department, Faculty of Medicine Siriraj Hospital and other places. So, we suggested that this method could be used and applied as routine forensic task in Thailand.

The researchers wish to thank for Dr.Suthipol Udompanturak and Dr.Saowarak Hunangkul from the Clinical Epidemiology Unit, Siriraj Hospital, for their advice and help in the statistical analysis.

The seminal fluid of this experiment has been the product or specimen of the author. So, we do not ask for permission from Ethics Reviewed Board, Committee.

29.    Allard J, Davies A. Further information on the use of p-nitrophenyl phosphate to quantitate acid phosphatase on vaginal swabs examined in cases of sexual assaults. Med Sci Law 1979; 19: 174-8.