Background: Tuberculosis is a treatable disease, but remains a major cause of mortality. Culture for Mycobacterium is needed to make a definitive diagnosis; thus, loop-mediated isothermal amplification (LAMP) was attempted for its detection in formalin-fixed, paraffin-embedded (FFPE) samples.

Conclusion: LAMP for diagnosis of tuberculous lymphadenitis in FFPE lymph nodes has limitations because of the degradation of M. tuberculosis DNA in paraffin-embedded samples. Its simplicity, quick-application, high specificity and low cost make it an alternative in fresh clinical samples. Further studies on fresh lymph nodes are warranted.

Tuberculosis (TB) is a common chronic infectious disease caused by various strains of mycobacteria (Mycobacterium tuberculosis complex strains, e.g. M. tuberculosis, M. microti, M. bovis, M. africanum). M. tuberculosis is the most widespread infectious disease among humans [1]. TB causes an estimated 1.7 million deaths each year with more than 9 million new cases reported worldwide [2]. Typically, infection with M. tuberculosis manifests as pulmonary TB, but it can also affect other parts of the body in up to one-third of cases. Tuberculous lymphadenitis is the most common presentation of extra-pulmonary TB, particularly among HIV-infected patients [3].

A definitive diagnosis of TB is made by identifying Mycobacterium in a clinical samples; however, the difficult and time-consuming culture means that treatment is begun before cultures are confirmed [4]. Routine pathological diagnosis of tuberculous lymphadenitis depends on histopa-thology and detection of acid-fast bacilli using the Ziehl-Neelson stain (AFB stain). Among 89 (67 HIV-positive) tuberculous lymphadenitis-proven patients, histology and culture of a lymph node biopsy had the highest diagnostic yield (85% and 88%, respectively), followed by detection of acid-fast bacilli in biopsy smear (53%) [5]. A study among US immigrant patients (with culture positive tuberculous lymphadenitis samples) showed positive AFB staining in 44% (15/34 cases) [6].

In 2000, a novel technique that rapidly amplifies target DNA under isothermal conditions —the loop-mediated isothermal amplification (LAMP) method—was developed by Notomi [7]. LAMP employs a DNA polymerase with strand-displacement activity, along with two inner primers (FIP, BIP), outer primers (F3, B3) and loop primers (LF, LB), which recognize six separate regions within the target DNA [7]. The LAMP assay has a high specificity for Mycobacterium infection in fresh clinical samples [8-12]; however, no study of LAMP for M. tuberculosis of lymph node in FFPE samples has been conducted. We therefore planned a retrospective investigation of the potential use of LAMP as a simple assay for detection of M. tuberculosis using FFPE lymph nodes for pathological diagnosis.

Sixty-four patients who underwent lym-phadenectomy and tissue culture for diagnosis of tuberculous lymphadenitis at Srinagarind Hospital (Khon Kaen University) between 2007 and 2011 were included. This retrospective study was approved by the Ethics Research Committee, Faculty of Medicine, Khon Kaen University (HE531403).

Genomic DNA was extracted and purified from FFPE tissues using a QIAamp® DNA FFPE tissue kit (Qiagen, Germany). Ten-micrometer-thick paraffin sections were deparaffinized in xylene 2 times and dehydrated twice with alcohol. These sections were rehydrated with alcohol 3 times. Tissue sections were scraped into a microcentrifuge tube and lysed under denaturing conditions with proteinase K at 56°C for 1 hr. The lysate was applied to the QIAamp MinElute column and the bound DNA eluted with 50 ^L of ATE buffer. The DNA concentration and its purity were determined using a NanoVue™ spectrophotometer (GE healthcare, NJ, USA). 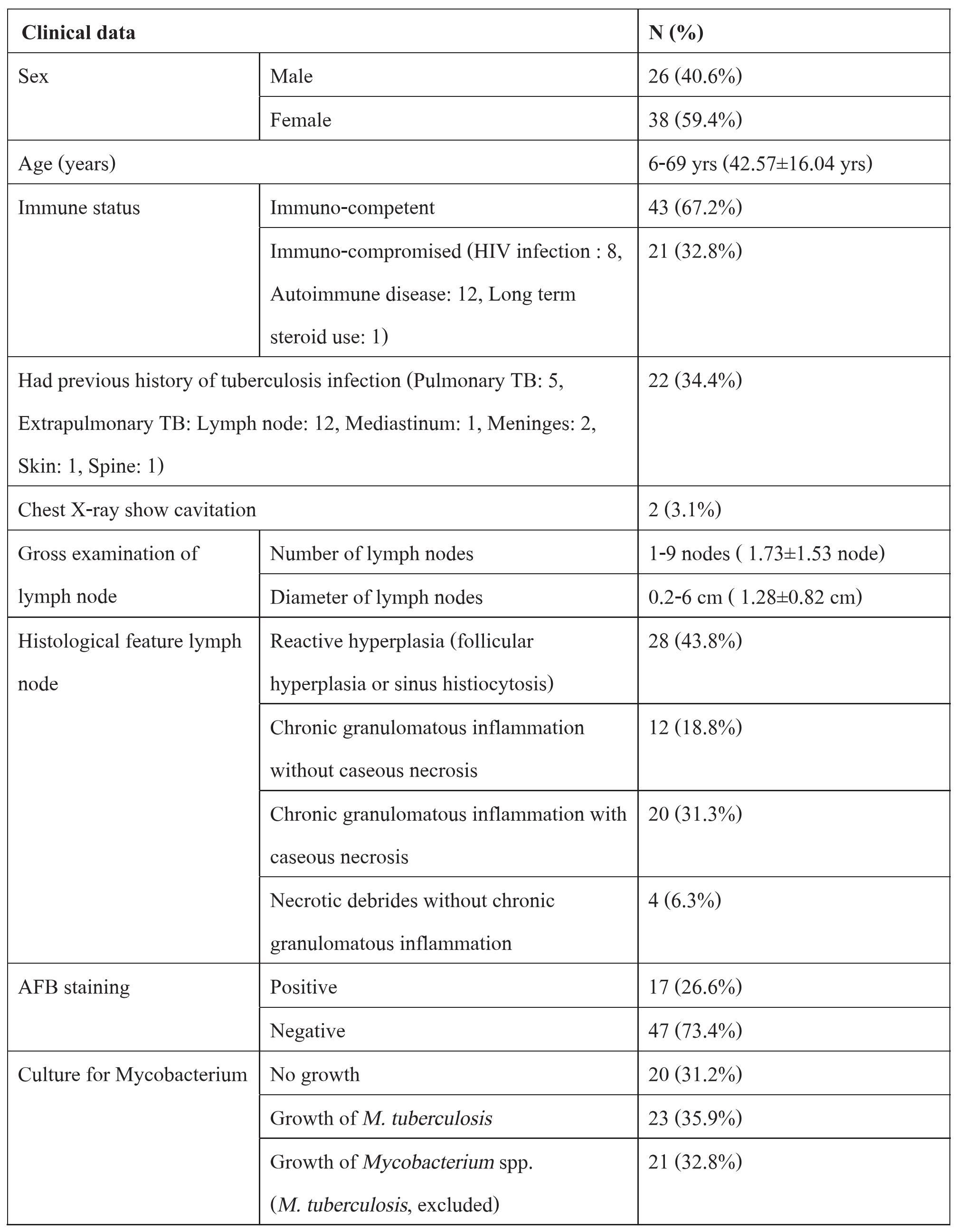 Six primers recognizing distinct regions of the 16S rRNA gene of M. tuberculosis (Figure 1) were designed for specific amplification using the PrimerExplorer V3 software (Eiken Chemical; https://primerexplorer.jp/lamp3.0.0/index.html). A primer set was composed of outer primers F3 and B3, inner primers FIP and BIP, and loop primers FLP and BLP. LAMP reactions were performed in a 25-^L reaction mixture [13]; comprising: 20 mM Tris-HCl (pH 8.8), 10 mM KCl, 10 mM (NH4)2SO4, 8 mM MgSO4, Tween 20 (0.1%), 1.6 M betaine, 1.4 mM deoxynucleoside triphosphate, 1.6 ^mol each of the inner primers FIP and BIP, 0.2 ^mol each of the outer primers F3 and B3, 0.8 ^mol each of the loop primers FLP and BLP and 8 U Bst DNA polymerase (New England Biolabs). Different volumes of template DNA were tested but 7.5 ^L DNA solution extracted was optimal. Double-distilled water was finally used to make up the volume to 25 ^L. No template DNA was added in the negative control reaction. The mixture was incubated at 65°C in a heat block for 60 min then at 80°C for 5 min to terminate the reaction.

A LAMP positive reaction was determined by visual assessment of the amplification reaction indicated by the hydroxy naphthol blue (HNB) changing color from violet to sky blue [7,13] (Figure 2).

The statistical evaluation was performed using SPSSTM 17 (KKU license). The number and diameter in the LAMP positive and LAMP negative groups were compared using the T-Test. The other data were analysed using the Chi-square test. Statistical significance was set at p <0.05.

Figure 1 The 6 primers recognizing distinct regions of the 16S rRNA gene of M. tuberculosis. A primer set comprised the outer primers (F3 and B3), the inner primers (FIP and BIP) and the loop primers (FLP and BLP). 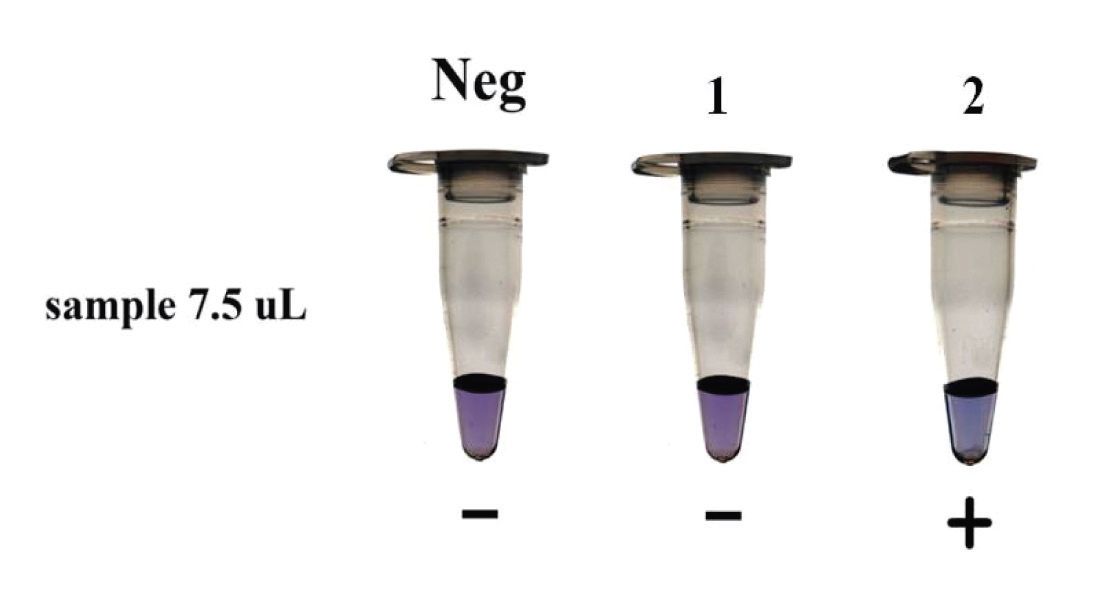 All FFPE samples yielded DNA extraction with different concentrations as determined by a spectrophotometer at O.D. 260 and tested with agarose gel (data not shown).

In our study, LAMP had a positive correlation with the pathology of tuberculous lymphadenitis; viz., histological features, positive AFB staining, and the increased number and diameter of the nodes involved. These factors indirectly indicated that LAMP+ was related to an increased amount of M. tuberculosis in the sample. While DNA extraction from samples yielded a satisfactory amount of DNA, our LAMP assay had a high specificity but low sensitivity for detection of M. tuberculosis in FFPE lymph nodes. The LAMP assay usually has both a high sensitivity and specificity, because the amplification reaction occurs only when all six regions within a target DNA are correctly recognized by the primers. The low sensitivity of LAMP is possibly from bacterial DNA structural damage in some samples during tissue fixation and processing, and/ or there may have been Bst polymerase inhibitor in the tissue during DNA extraction.

Our retrospective study suggests that AFB with a sensitivity of 56.5% is acceptable for routine practice since it is less expensive and common practice; however, for confirming a diagnosis or handling problematic cases in FFPE, PCR would be more appropriate than LAMP. The LAMP technique—an assay with high specificity, simple to do and able to provide a diagnosis in less than 2 hours—is, however, suitable for rapid diagnosis in outpatient care, for field work and in areas where culture is not available.

LAMP for diagnosis of TB in FFPE tissue had a high specificity, PPV and NPV but a low sensitivity. The results of the current study and previous studies indicate that LAMP is suitable for the study of fresh specimens.

We thank (a) the staff at the Medical Records Section (b) the laboratory technicians for their meticulous work (c) Professor Shanop Shuang-shoti for detailed suggestions and (d) Mr. Bryan Roderick Hamman for assistance with the English-language presentation of the manuscript.