The role of Immunohistochemistry in diagnosis of renal cell carcinoma subtypes.

Renal cell carcinoma(RCC) is the third most common cancer of the genitourinary tract and the most lethal urologic cancer, accounting for approximately 2% of adult malignancies and 90-95% of neoplasms arising from the kidney.[1] More than 90% of the renal cell carcinoma arise from the renal tubules[2]. Formally, RCC was divided into 5 main histologic subtypes: Clear cell, Papillary, Chromophobe, Collecting duct and unclassified RCC [3,23]. Clear cell, Papillary and Chromophobe RCC are the three most common types, comprising 70-80%, 14-17% and 4-8% of all RCCs, respectively. Collecting duct carcinoma is the rarest type of RCC(<1%). Unclassified RCCs include those that do not fit into any of the above 4 subtypes either morphologically or cytogenetically.[3,4]

Adult renal epithelial tumors are heterogenous neoplasms. The World Health Organization (WHO) classification recognized a growing number of relevant clinicopathological subtypes with different pathogenetics and prognoses[6]. Although, in most cases, the diagnosis is based on morphological examination, cytogenetic changes, fusion transcript detection and immunohistochemical analysis are useful ancillary techniques to refine the classification [2,7]. In this study, we aimed to identify the IHC panel which would be reliable to increase precision of the diagnosis of the RCC subtypes.

All cases of renal cell carcinoma diagnosed between 2004 and 2009 were retrieved from the departments of pathology, Faculty of Medicine, Chulalongkorn University and King Chulalongkorn memorial hospital. Eighty-three renal tumor cases obtained from patients treated by radical nephrectomy were included. All microscopic sections of these 83 cases were reviewed to select the proper tissue blocks for tissue microarray (TMA) by a pathologist. The previous diagnoses were recorded for comparison. The histological types were determined according to the WHO 2004 classification [6].

Seventy-eight from 83 cases, the diagnoses of the RCC subtypes were concordant, which consisted of 55 CRCC, 17 PRCC and 6 CHRCC. Disagreement in diagnosis was found in 5 cases, some of which the diagnoses were not achieved with IHC. Thereafter, we used CD117 antibody as an additional immunostaining for supporting the result.

The results of immunohistochemical staining in 78 cases were detailed (Table 1). Representative H&E and IHC staining was illustrated (Figure 1).

Table 1 The results of Immunohistochemical staining 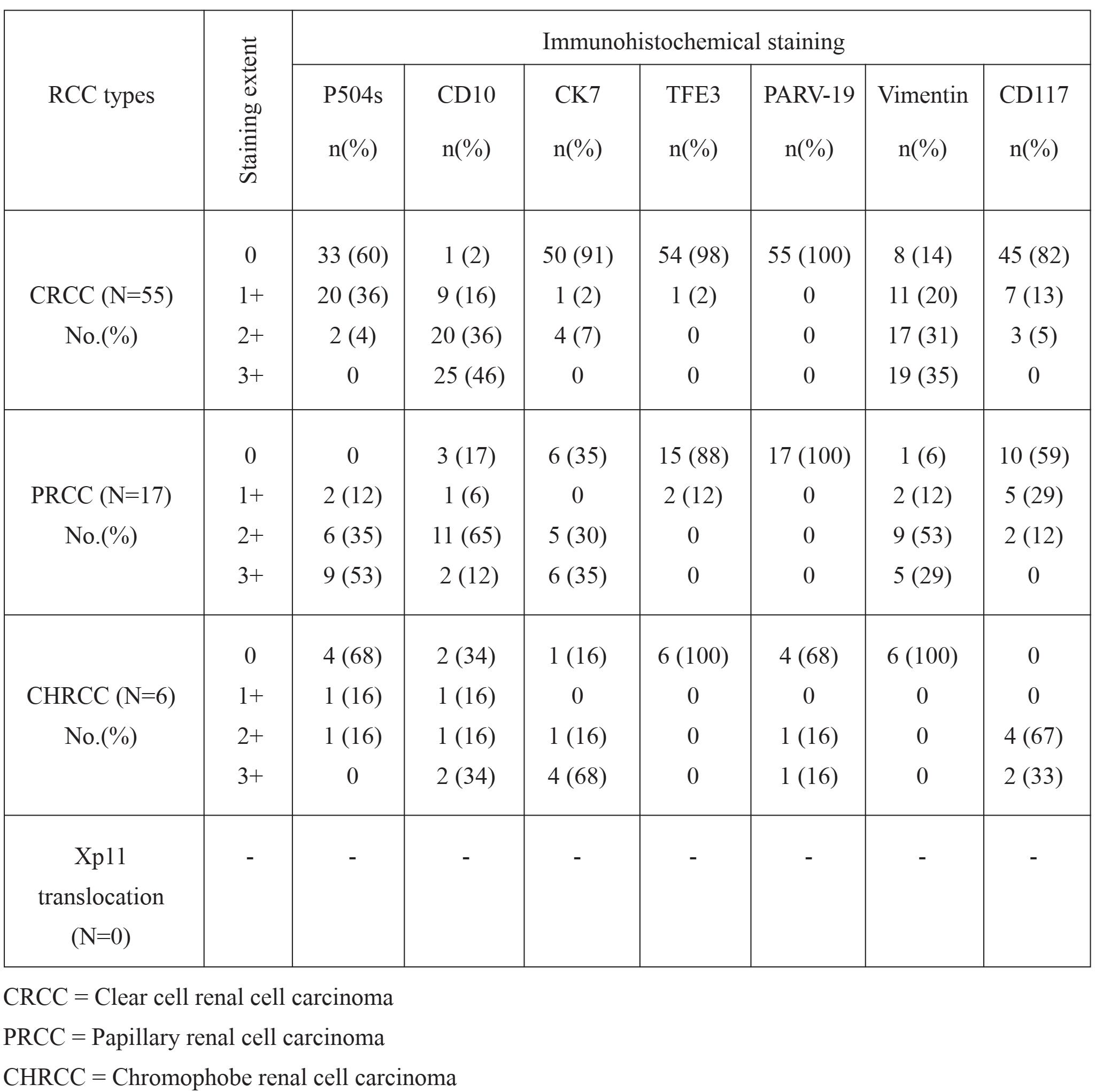 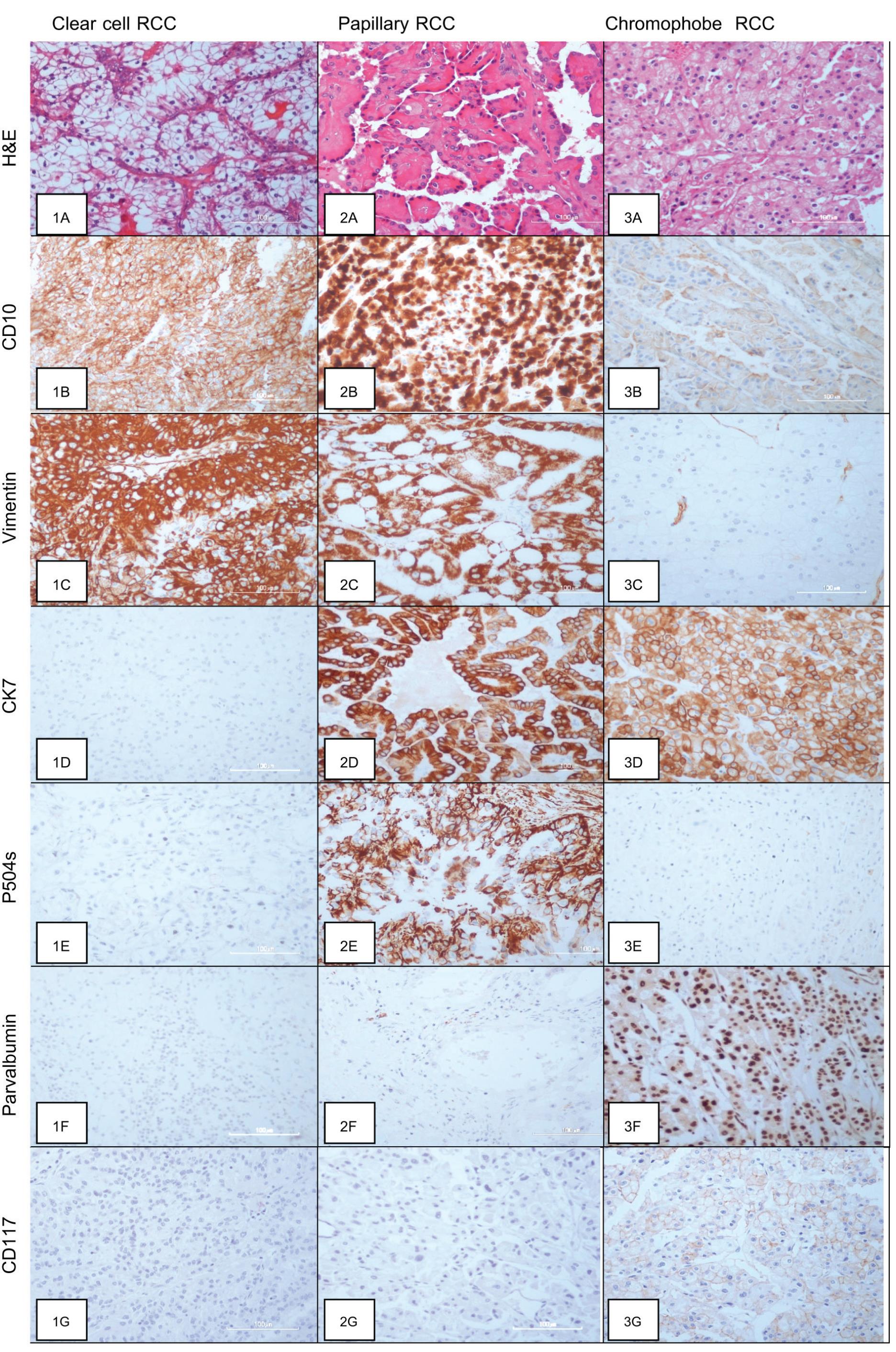 Table 2 The summary of Immunohistochemical staining 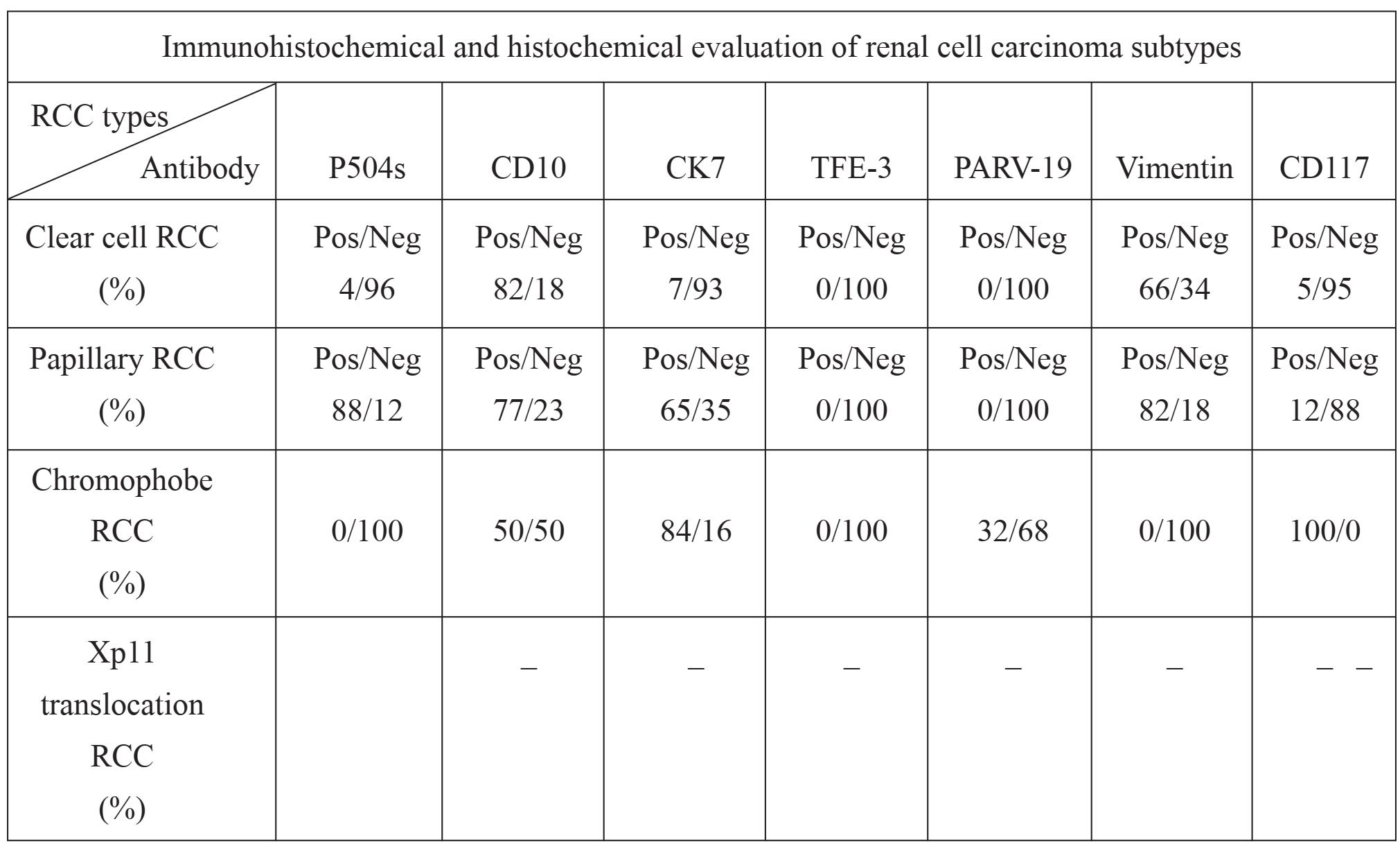 of CK7 were documented in the studies by Adley et al [15]and Skinnider et al [16]. Parvalbumin was expressed in only CHRCC as many as 80% of cases in previous studies [17,18]. The diagnoses were unable in some of the five cases with incongruent diagnoses. The immunoprofiles of these cases were not applicable to any subtype. While some cases, the immunoprofiles were disagreed with the morphology. Additional immunostaining, CD117 were applied in the second step to support the diagnosis of CHRCC [7]. The study by Pan et al [19] and Wang et al [20] discovered the expression of CD117 in CHRCC, while the other subtypes were non-reactive . None of our cases were positive with TFE3 markers. The TFE3 was specific for Xp11 translocation RCC, which was recently added as a new subtype of RCCs [6]. Therefore, incidence of the Xp11 translocation RCC could not be determined in this study. However, other subtypes oftranslocation RCC, such as t(6;11)(p21;q13) translocation were not completely excluded. This type of tumor could be stated by detection of TFEB expression [21].

We recommended using Vimentin, CK7, and CD10 as the first-stepped IHC panel. Then the second step, IHC would be used to confirm subtypes. We suggested P504s (to confirm PRCC), CD117 and Parvalbumin (for CHRCC). However, there were cases which the morphologic features and the immunoprofiles were incongruent. According to the recent WHO classification of the renal cell carcinoma subtypes, genetic derangement of the tumor was the most reliable information to determine the RCC subtype [6]. Therefore, cytogenetic means should be the most appropriate or gold standard to use in diagnosis [22]. However, the cytogenetic methods were costly and inapplicable in our study or even routine pathological laboratory service. Immunohistochemical studies are still an appropriate and advantageous techniques in providing information for accurately categorizing most cases of the renal cell carcinoma.

tion in the Diagnosis and Subclassification of Renal Neoplasms. Cancer cytopathology 2010; 25: 137-145.