The purpose of this study is to describe histopathological findings of frontoethmoidal meningoencephalocele (FEEM), and to correlate with the embryogenesis. The study materials were gathered from 86 cases of FEEM, during 1995-2005. The histopathology was observed in terms of the pattern of the lesion, the relation to the skin and surrounding soft tissue, and the differentiation of cell components. The histopathology was described as solid, disperse and reticular patterns of mature neuroepithelium and meningothelial tissue with varying amount of fibrosis. The lesions occupied the dermis, subcutaneous fat and facial muscle. The dermal-epidermal junction was not involved. Regarding histopathology and embryogenesis, misplaced primitive neuroepithelium in the early embryonic stage before development of the epidermis, muscle and bone are the proposed pathogenesis from this study mechanism for developing such lesion.

Frontoethmoidal encephalomeningocele (FEEM) is a congenital anomaly described as prenasal masses, which continue to the intracranial tissue via bony defects in the anterior cranium between the frontal and ethmoidal bones. It is relatively common in the Southern and South-East Asia with reported incidence varies between 1: 3,500 to 1:7,500 in Thailand [1, 2]. In contrast with the western countries, the occipital form is mostly found [1, 3, 4]. Several reports classified FEEM for surgical correction [5, 6, 7]. However, the histo-pathology of FEEM has been mentioned but not described in detail. Herein we describe the histopa-thology of FEEM and propose pathogenesis based on histopathology and embryogenesis.

The materials were slides of Hematoxylin and Eosin (HE) gathering from surgical specimens of resected FEEM during 1995 to 2005 at the Department of Pathology, Siriraj Hospital. Recurrent cases were excluded from the study. In case that the neuroepithelial tissue was difficult to recognize, additional histochemistry (Masson trichrome, reticulin) was included. In equivocal cases, menin-gothelial cells and astrocytes were confirmed by immunopositive for epithelial membrane antigen (EMA) and glial fibrillary acidic protein (GFAP) respectively.

The histopathology evaluation focused on the pattern of FEEM, the cell components and the relation of FEEM to the skin and surrounding soft tissue.

Sections from 7 cases of normal glabella skin from autopsy subjects whose bodies were donated to Siriraj Hospital (age ranged from 33 weeks gestation to 2 years) were also collected to compare the skin and soft tissue architecture of this region.

There were 86 FEEM cases in this study, 44 patients were male and 42 patients were female. The patient’s ages ranged from 2 months to 23 years. FEEM specimens had 1-11 H&E slides per case. Total H& E slides were 230 slides.

Since the histopathology of FEEM varies from well developed cysts to ill define soft tissue masses, we then described the lesions into 3 categories as follow:

3.1    Solid pattern was defined as a well-demarcated mass or cyst. Within the mass were mature well-organized or disorganized neurons and glial cells. Numerous blood vessels and fibrous tissue encircling the masses were often seen. (Fig 1)

3.3    Reticular pattern was defined as streaks or small groups of meningothelial cells or astrocytes admixed with dense fibrous tissue (scarlike fibrosis). This pattern was hardly recognized on HE alone. (Fig 3, 4)

All lesions were composed of mature cells. Well-organized neuroepithelium appeared as grey matter, white matter, cerebral or cerebellar cortex. Ependymal lining and well-formed choroid plexus were found in only 2 cases (2.3%). In 3 cases 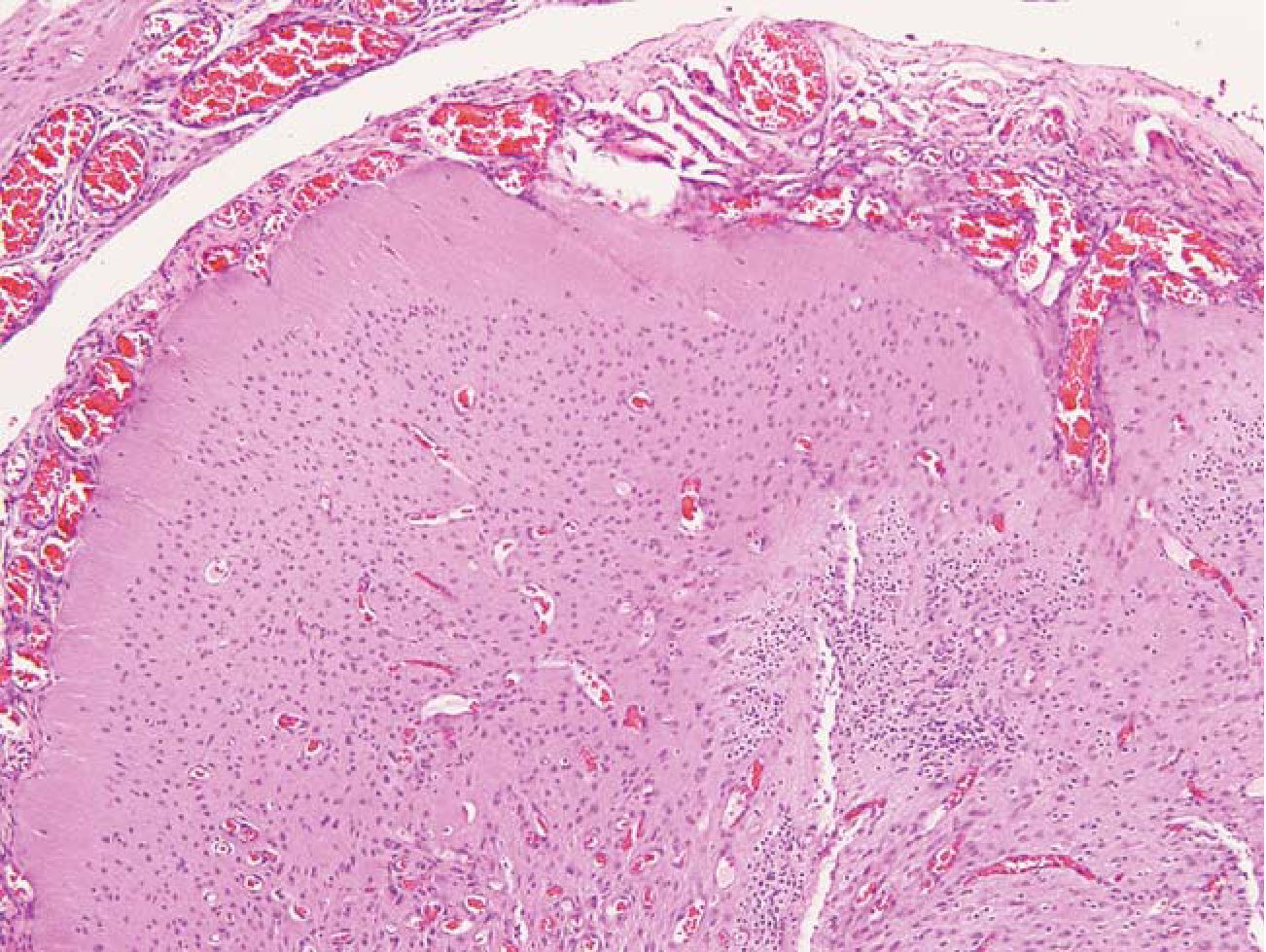 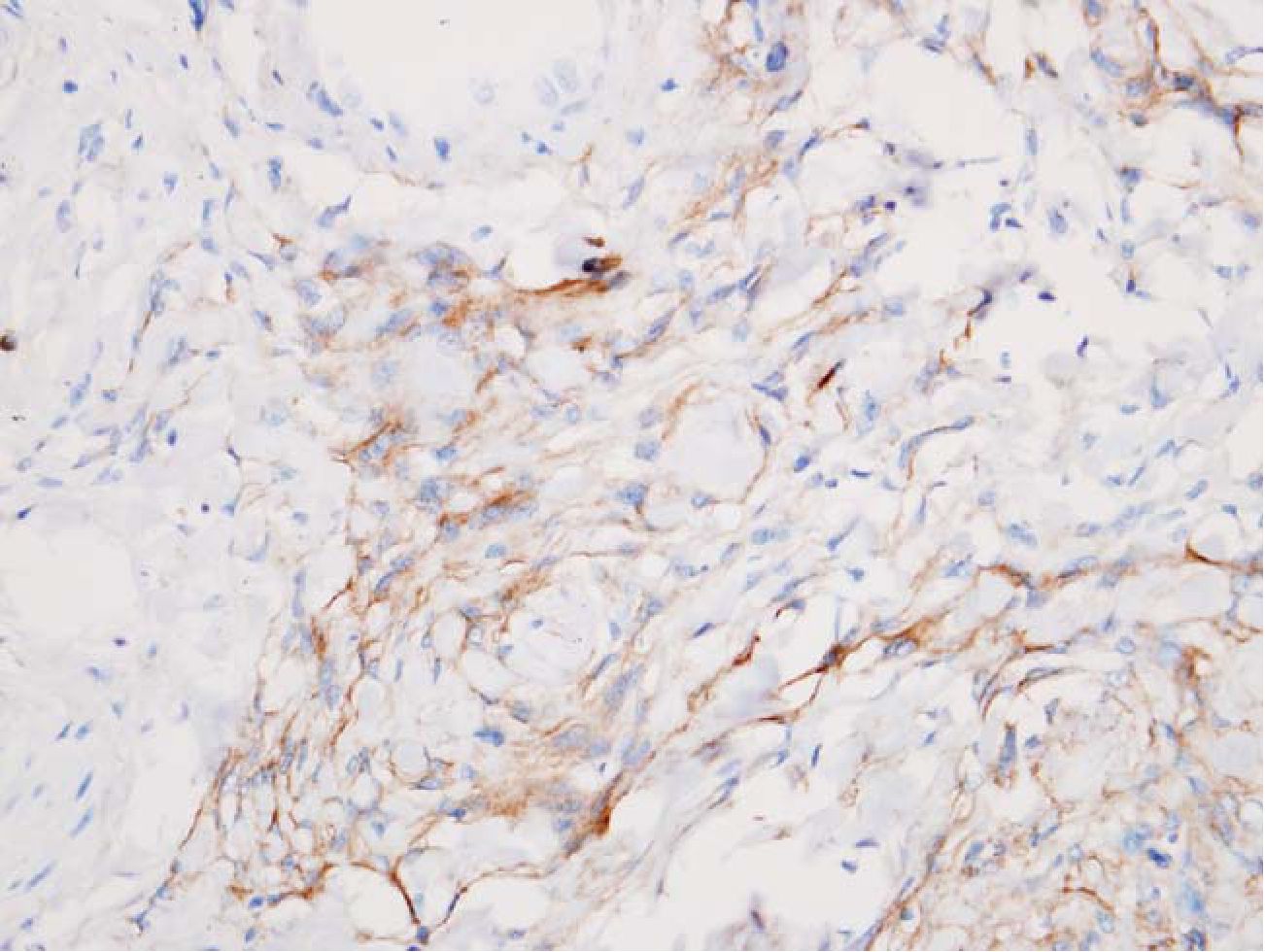 Fig.2 Disperse pattern. A mass comprised interlacing neuroepithelial tissue and dense connective tissue. There is no well- defined membrane around the mass. HE 200x 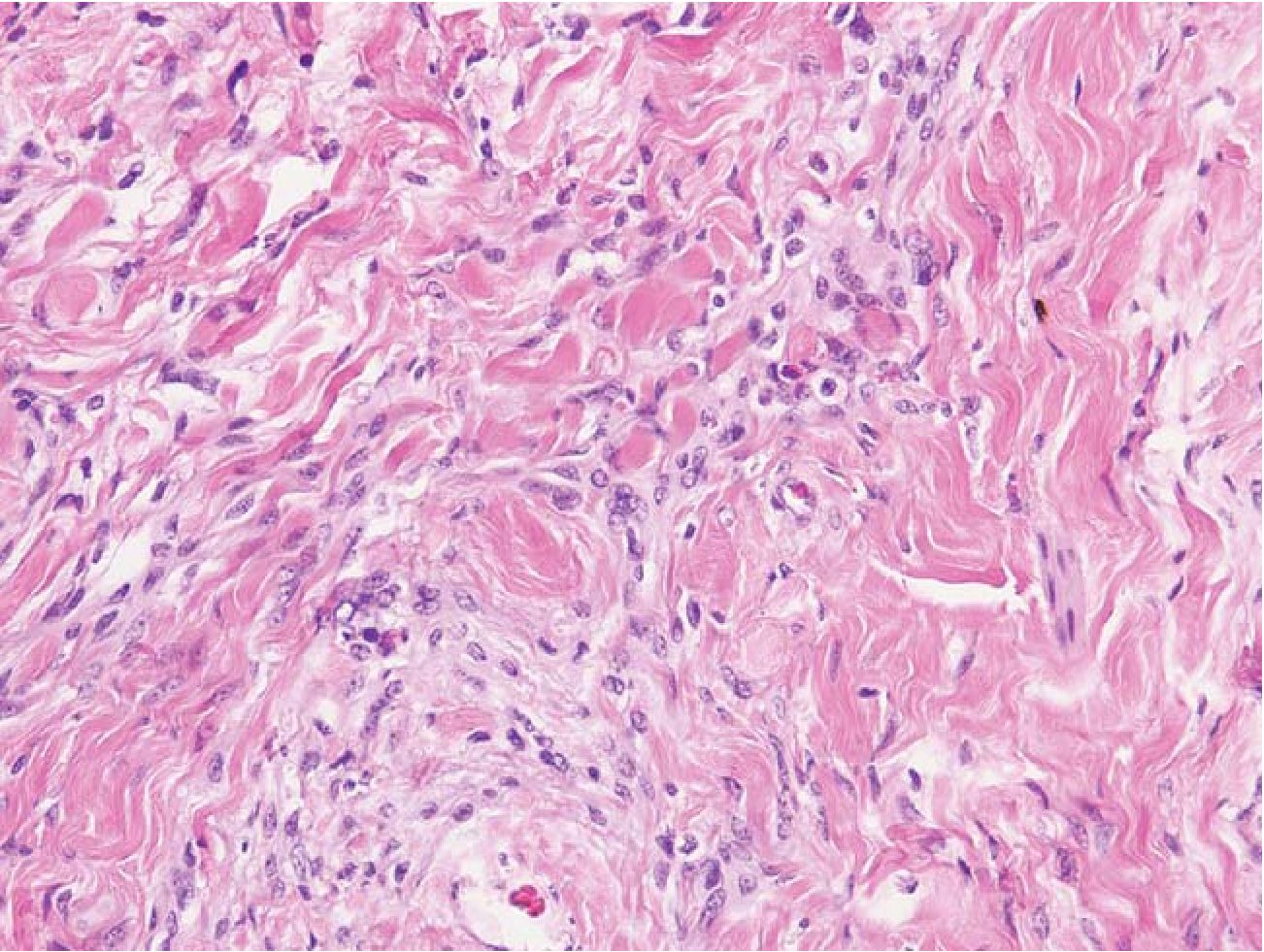 Fig.3    Reticular pattern. An ill-defined mass had streaks of meningothelial cells and astrocytes within densefibrous tissue. HE 400x 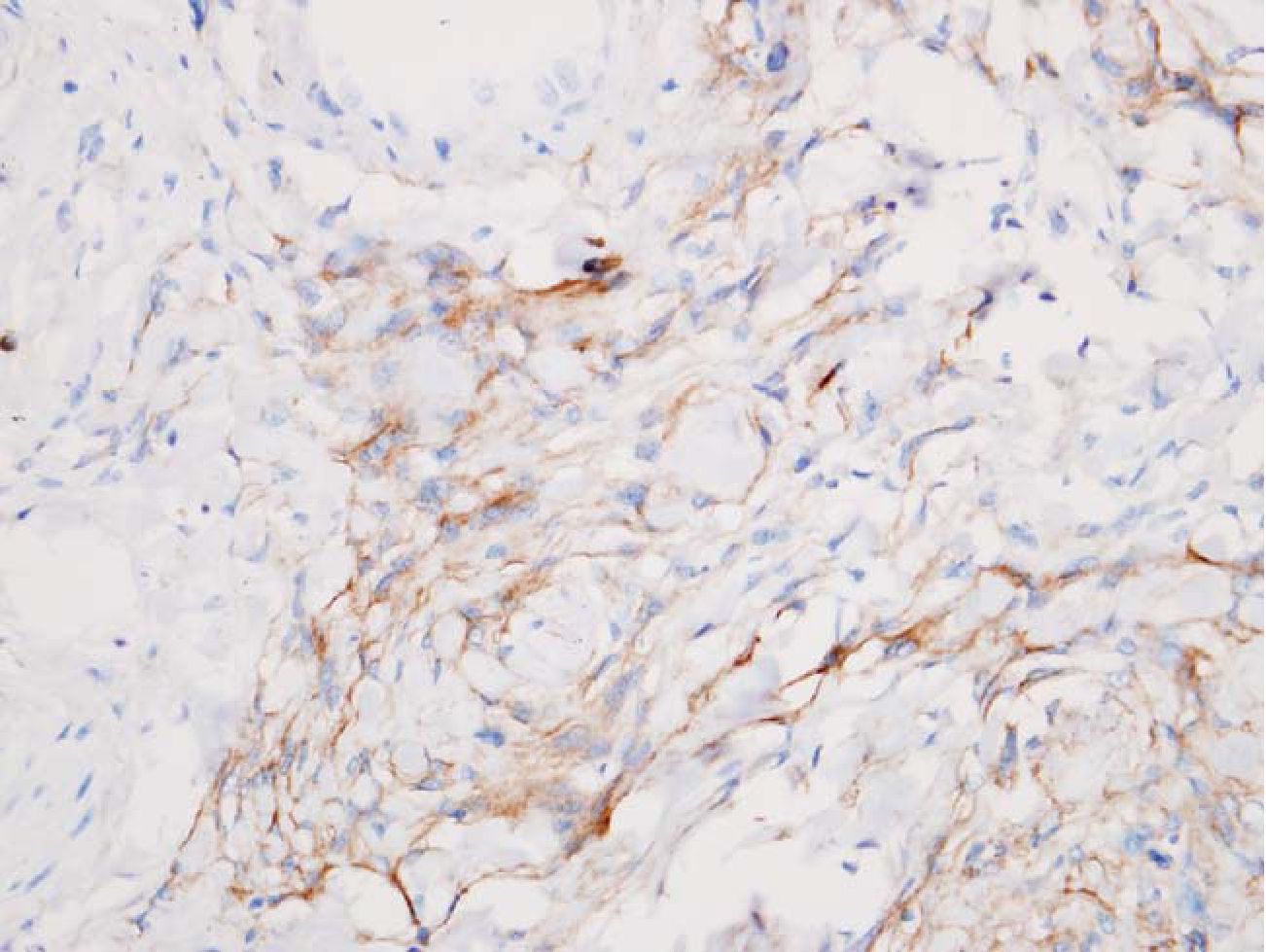 Fig. 4 Meningothelial cells were marked with EMA. HE 400x 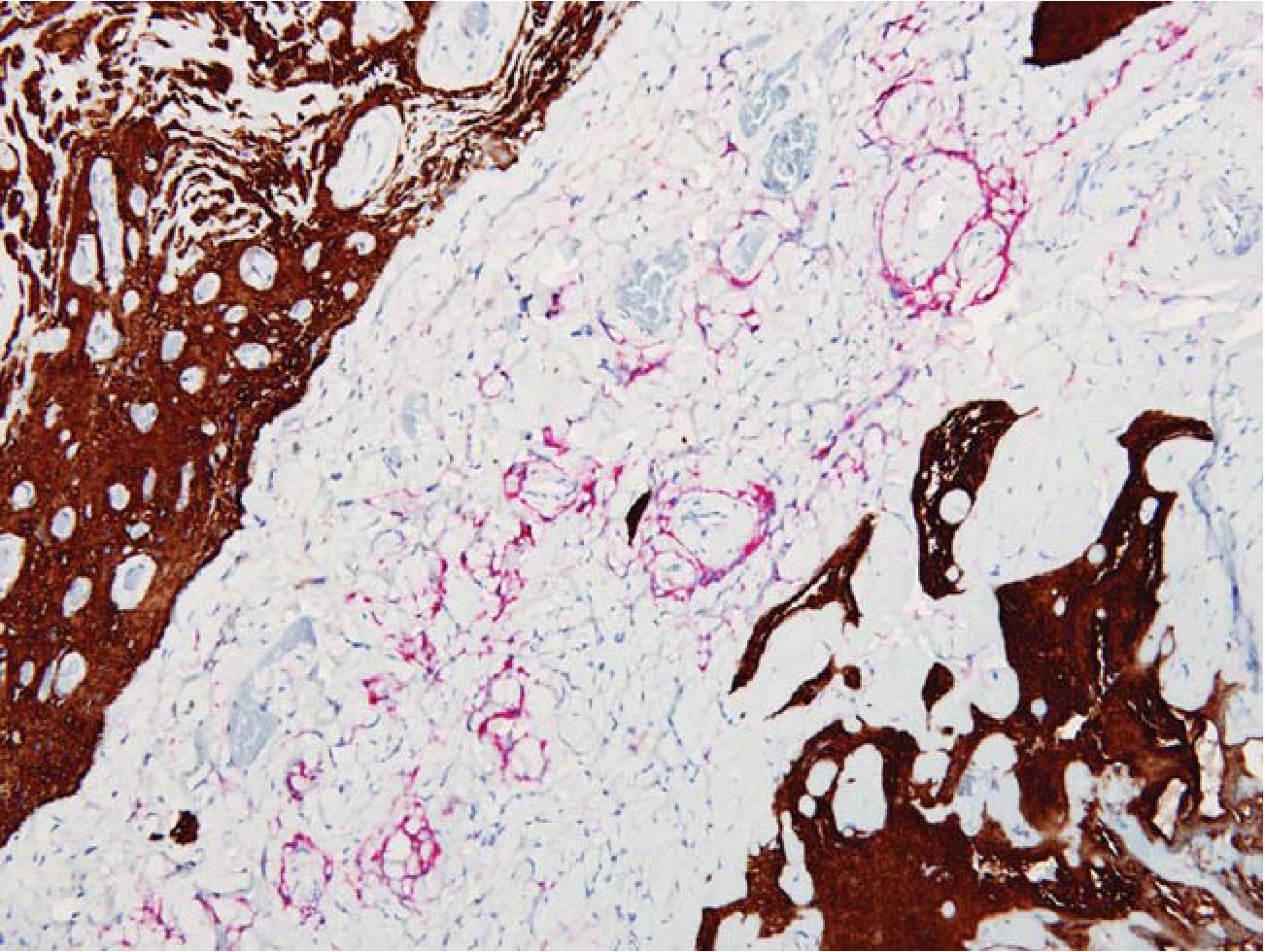 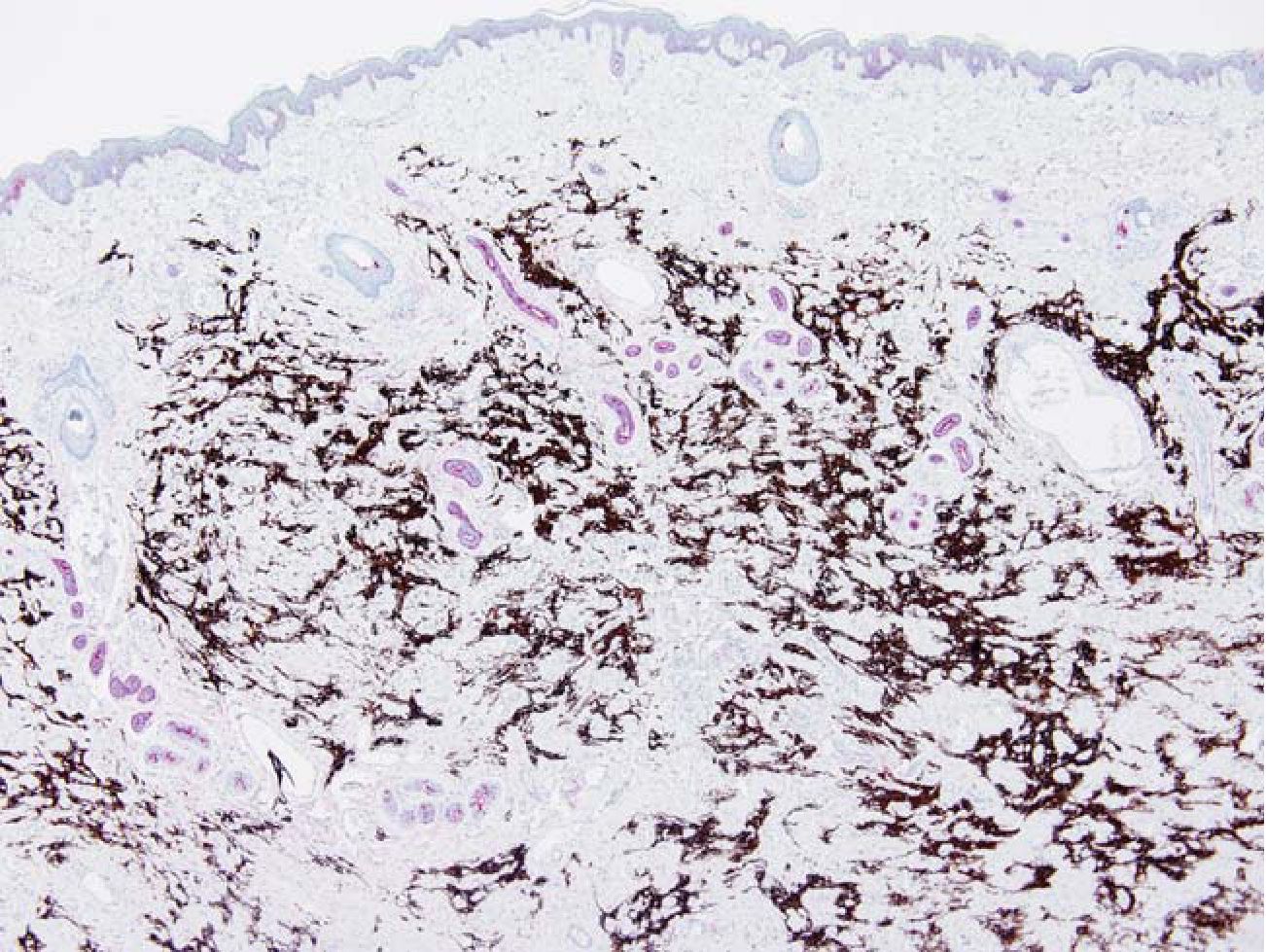 Fig. 6 FEEM in the dermis. The epidermis was thin. The dermal appendages (red) were distorted. Glial tissue (brown). EMA/GFAP 40x

(3.5%), scattered melanocytes were found in the neuroepithelial islands. Disorganized neuroepithelium and glial tissue were more common. Menin-gothelial cells were identified as a well-developed membrane mimicking arachnoid membrane, or scattered groups of cells. Dense fibrous tissue was present in all cases while striated muscle fibers were not seen in the lesions. Unlike immature teratoma, immature neural epithelium or neoplastic tissue was not seen. Few small lymphocytes are noted in some cases.

Relation of FEEM to the skin was identified in 76 cases in which the skin was intact (88.4 %). All lesions regardless of the patterns were confined in the dermis at the level of the skin appendages or below. (Fig 6) FEEM located between the appendages or replaced the appendage structures. None of the lesions reached the dermal-epidermal junction. The epidermis, if not ulcerated, was thin.

The histopathological findings of meningocele varied from case to case. Solid pattern was easily detected but it was found in only one fifth of the cases. Most of the cases were disperse and reticular pattern. On H& E they were sometimes difficult to identified. The findings in this study were similar to those found in nasal gliomas and sequestered meningoceles [8-12]. The constant components were meningothelial cells, astrocytes and fibrous tissue. Neither cellular atypia nor primitive neuroepithelium were described in our study or in previous reports. These entities (FEEM, nasal gliomas, and sequested meningoceles) might be examples of heterotopic tissue during development.

When and how did the neural epithelium misplace? This study showed that the heterotopic tissue occupied any level from the lower dermis to the resected margin from the intracranial component. None of them reached the dermal-epidermal junction and the dermal appendages were distorted or pushed aside. Based on embryogenesis of the skin, the surface ectoderm separated from the neuroectoderm at 4 weeks gestation [13]. At 5 weeks gestation, the ectoderm differentiated to form the epidermis. Not until 12 weeks did the epidermis grew downward, forming dermal papillae and the mesoderm differentiated to form dermal appendages and muscle [14]. Previous studies suggested that any disturbance in separation of neural tube and surface ectoderm at 4 weeks gestation might cause residual neural epithelium at the site of final closure of the rostral neuropore [14, 15]. Our findings, particularly the histopathology of FEEM (neuroectoderm) and mesoderm relationship supported this concept. After 12 weeks, when the mesoderm developed, preexisting neuroepithelium then interfered dermal papillae, dermal appendages, striated muscle and bone differentiation.

In conclusion, the histopathology of FEEM was described. Reticular pattern was hardly recognized and might be missed. From histopathology point of view, defect of neuroepithelial separation in the early embryonic stage leading to heterotopic neuroepithelium are the proposed mechanism of developing this lesion from this study.

This work was supported by Research grants for residents and fellowship and was approved by Siriraj Ethics Committee, Faculty of Medicine, Siriraj Hospital, Mahidol University.