Material and Methods: Sixty patients who underwent thyroidectomy with preoperative FNA and intraoperative FS were reviewed. The results were compared with the final histologic diagnosis (FHD) to assess their effectiveness in prediction of malignancy.

Conclusions: FS appears to give benefit when the results of FNA are indeterminate or benign. FS may not be necessary in the cases of malignant FNA results.

Thyroid nodules are common with the prevalence of 4% to 7% in the general population. Most of them are benign but approximately 5% are malignant. Thyroid cancer is the most common endocrine malignancy and causes 26,000 deaths per year1. According to Siriraj Cancer Center annual statistical report 2004, it revealed that the incidence of thyroid cancer is 2.57% from all cancers and becomes the eighth most common malignancy (3.49%) in Thai female patients2. The clinical history and physical examination are the cornerstones of diagnostic clues in evaluation of the patient with thyroid nodules.

Fine needle aspiration (FNA) provides the most direct and specific informations for thyroid nodule. It can be performed at outpatient clinic and is relatively inexpensive. FNA is currently regarded as the test of choice for the diagnosis and management of the thyroid nodules. Although, up to 30% of the results are reported as suspicious or follicular lesions (indeterminate lesion). For the follicular lesion, cytology is unable to differentiate malignancy from benign aspirates3. According to the previous study, the prevalence of malignancy in patients who had thyroidectomy was 42%3. The sensitivity of FNA was 50- 92% and specificity was 45-99%4-7, 15.

The utility of intraoperative frozen section (FS) of thyroid gland remains controversial. Prolonged operating time and additional procedure cost are important constraint of FS. Literature review showed both extreme ends of the FS usage in management of thyroid nodules. Most authors used the intraoperative FS in the indeterminate cytologic result4, 5 9. The indeterminate result includes the so-called “follicular lesion” or “follicular neoplasm”, which can be hyperplastic nodules, follicular adenoma, or follicular carcinoma. But some authors believed that FS is only indicated in the cases of preoperative FNA of the thyroid nodules suggestive of malignancy and in order to determine the extent of the operation8. But one study concluded that preoperative FNA has no benefit in the selection of the surgical procedure and the intraoperative FS yields only little benefit for surgical management6.

This study was aimed to determine the necessity of FS for thyroid nodule when preoperative FNA is available.

Sixty patients underwent thyroidectomy with both preoperative FNA and intraoperative FS at Siriraj Hospital, from January 2002 to December 2004. The cases with all three materials were included in this retrospective review. The patients with inadequate preoperative FNA were excluded from the study. The adequacy of cytologic specimen was defined by the presence of at least six clusters of 10 well-preserved follicular cells in each group or any material that contains abundant colloid.10, 12 All adequate materials were reviewed.

The intraoperative cytology (IC) was undertaken and included in the study. The IC was categorized similarly to that of the preoperative FNA specimens. The intraoperative diagnosis was concluded from both FS and IC. All final histologic diagnoses (FHD) were performed based on WHO classification of endocrine organs 2004 for neoplastic lesion and AFIP 1992 for non-neoplastic lesion12,13.

Table 1 Comparison of histologic diagnoses between male and female 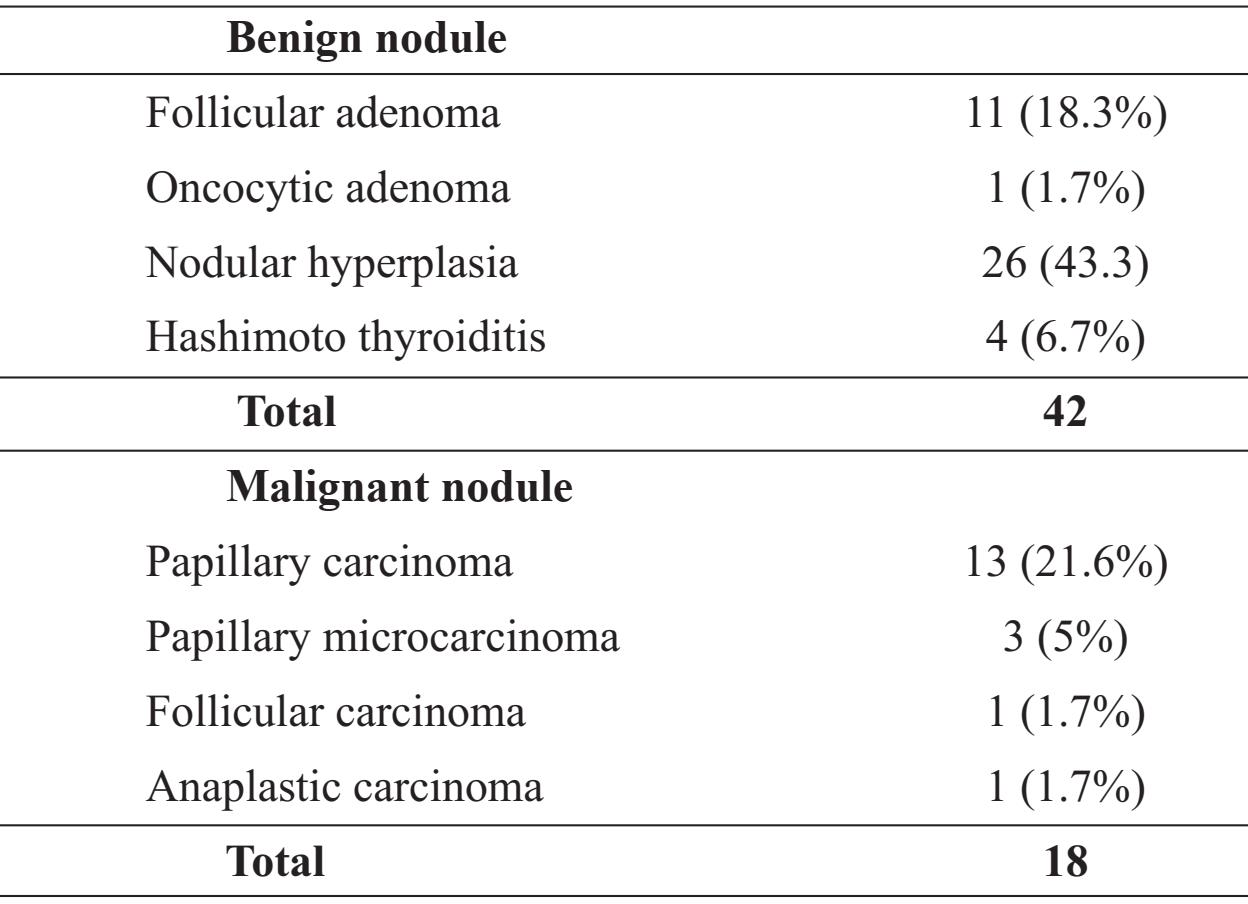 Comparison between FS and FHD

As in table 3, FS found 36 benign, 15 malignant and 9 indeterminate lesions. Thirty-four of 36 benign (94.4%) and all 15 malignant (100%) lesions were concordant with FHD. Two benign lesions diagnosed by FS were papillary microcarcinoma (small sized lesion) in FHD. One in 9 indeterminate lesions by FS as follicular lesion favoring neoplasm was proved to be follicular carcinoma in FHD. Sensitivity, specificity, accuracy, positive predictive value and negative predictive value of FS were 88%, 100%, 95%, 100% and 93% respectively.

Comparison between preoperative FNA and FHD 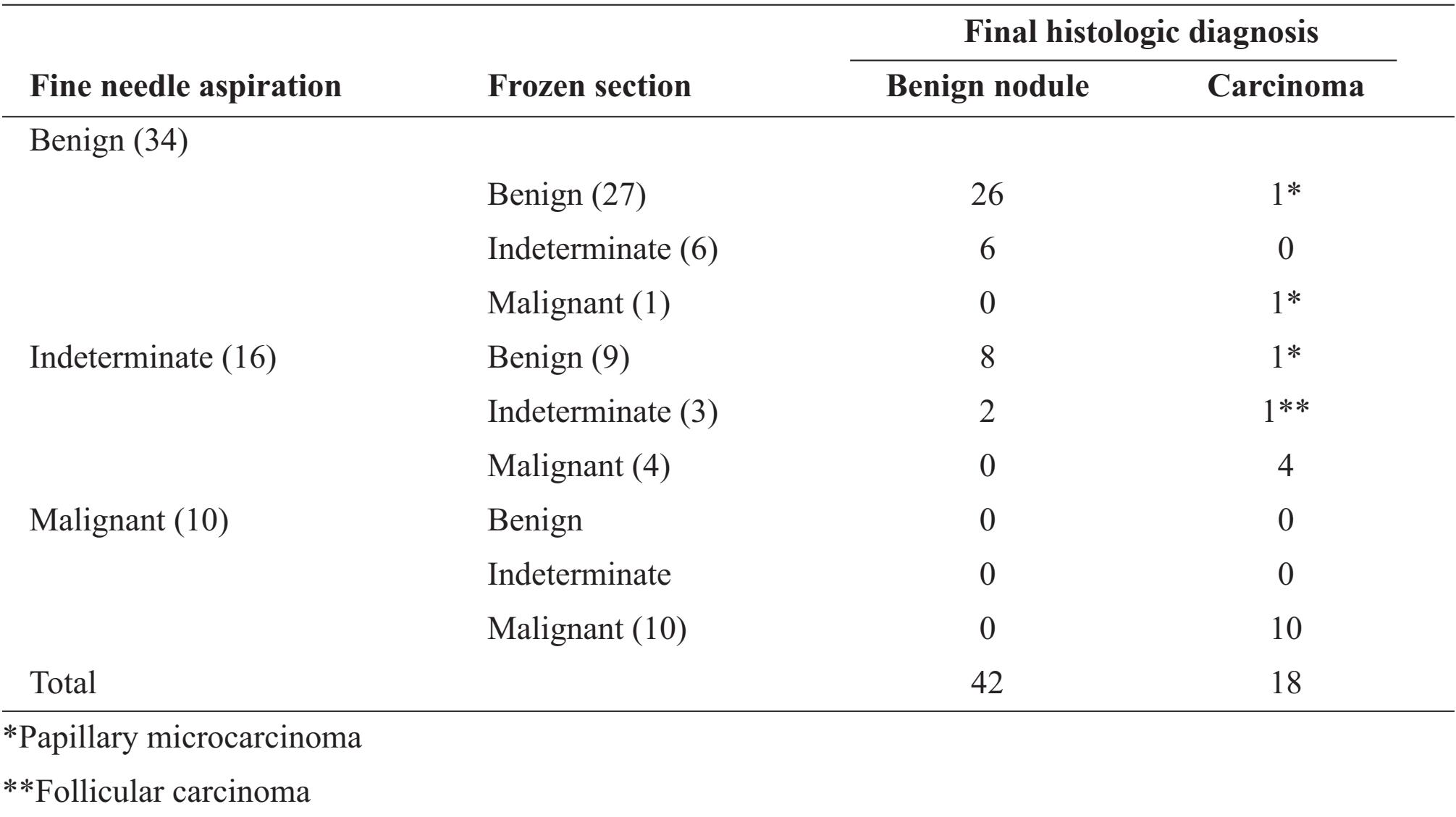 Diagnostic modalities for nodular thyroid lesion include radionuclide scanning, ultrasonography and fine needle aspiration cytology. FNA is currently regarded as the test of choice for the diagnosis and management of the thyroid nodules, thereby reducing the number and the extent of operative intervention performed.

The recent study of Tzu-Chieh Chao et. al. suggested that there is no benefit of FS for benign FNA result14. In our study, 2 in 34 (5.9%) cases in benign group by FNA were malignant lesion in FHD. FS can detect malignant lesion in 1 (2.9%) of benign FNA results (Table 3). One case of papillary carcinoma diagnosed in FHD was previously diagnosed by FS as Hashimoto’s thyroiditis with extensive chronic inflammatory cell infiltration. These results suggested that FS showed less advantage for benign FNA lesion because of chances of sampling error. Thus, the FS in this circumstance may not provide benefit; on the other hand it may increase cost and turnaround time of the operation. Many authors suggested to categorize the atypical and follicular lesion in the same group. Because of both benign and malignant lesions showed similar cytologic appearance. The diagnosis of malignancy depends on the demonstration of capsular or vascular invasion which is demonstrable only in histological preparations12. In indeterminate group of this study, four cases of 13 follicular lesions were proved to be malignant in FHD. Two in 4 cases were detected as malignant in FS. Two of 3 (66.7%) suspicious lesions of papillary carcinoma were proved to be papillary carcinoma by both FS and FHD. Six in 16 (37.5 %) cases diagnosed as malignancy in FNA were interpreted as follicular lesion or suspicion of papillary carcinoma. The sensitivity, specificity and accuracy of FS in the cases with FNA results of indeterminate group were 66.7%, 100%, and 87.5%. These results revealed benefit of FS in case of indeterminate lesions in FNA. FS provides worthy information for determining the extension of operation.

On the other hand, some reports14-15 indicated benefit of FS in malignant cytologic results. All cases interpreted by FNA in our study as malignant lesions were concordant with both FS and FHD. Thus, FS did not show benefit in this condition.

The limitations of our study were 1) the quality of slide preparations varied upon different clinicians 2) small number of patients who had complete all three histologic modalities due to the fact that most cases of FNA in Siriraj Hospital were managed without operation. The prospective study with larger number of patients should be performed to confirm the advantages and disadvanges of FNA and FS in the management of thyroid disease.

FNA and FS are specific, accurate and sensitive diagnostic technique for evaluating nodular thyroid disease. Routine use of FS in all operative cases is not recommended. FS is useful when FNA interpreted as suspicion of papillary carcinoma and shows little benefit in benign FNA results. FS does not prove benefit when FNA interpreted as malignancy.

19. Yusra Cheema, Sarah Olson Diane Elson, at el. What is the biology and optimal treatment for papillary microcarcinoma of the thyroid? Journal of Surgical Research 2006; 143: 160162.