Blood from 564 patients infected with human immunodeficiency virus (HIV) were studied for laboratory analysis. The hematological changes including white blood cell count (WBC), percentage and absolute number of lymphocyte and eosinophil were determined by using the Technicon H*3 RTX hematological analyzer. Analysis of blood cell parameters were done within 4 hours after venous blood collection. It was noted that 201(35.6%) out of 564 patients had eosinophilia and 148 (73.6%) out of those 201 patients with eosinophilia showed increased CD4/CD8 ratio as compared with those in patients with normal eosinophil. Furthermore, we found that the patients with extremely high eosinophilia (greater than 60% eosinophil) had the greatest degree of increased CD4/CD8 ratio. Significant correlation between % eosinophil and absolute CD4 (r = 0.552, p-value = < 0.0001) and between % eosinophil and CD4/CD8 ratio (r = 0.716, p-value = < 0.0001) were also observed. It may be suggested that eosinophil estimation might be used as a simple marker from blood smear observation for an assessment of patient status which could be related to the CD values and possibly prognosis of the HIV-infected patients.

A unique human retrovirus termed human immune deficiency virus (HIV) is the primary etio-logic agent in the pathogenesis of the acquired immune deficiency syndrome (AIDS) [1-2]. Many categories of clinical outcome are recognized after infection with HIV: generalized unexplained lym-phadenopathy, persistent fever, weight loss, unexplained diarrhea, central nervous system dysfunction, and asymptomatic carrier detected by specific serum antibodies to HIV. Several studies have described the hematologic effects including both in peripheral blood and bone marrow of the HIV-infected patients. Decreased blood cell counts are common manifestation of HIV infection. In addition to the characteristic decrease in CD4- positive T lymphocytes, anemia occurs in approximately 70%, granulocytopenia in 50%, thrombocytopenia in 40% and lymphopenia in 70% of HIV-infected patients [3-8]. These blood cell changes are caused by the direct effect of HIV infection or by the coexistent infections and the myelosuppressive drugs used in the treatment. Over the last decade, most of the researches have focused on the unrelenting force of HIV to attack the CD4 cell receptor, to enter the CD4 cell cytoplasm, to use HIV viral reverse transcriptase to insinuate itself into human DNA, and to eventually destroy CD4 cells. However, another cell line, especially eosinophil cell line, may also be abnormal in HIV-infected patients and an increase in eosinophil number and activation of eosinophil may also be important to the patients [9-10]. Eosinophils are produced in bone marrow from pluripotential stem cells. Three cytokines including interleukin (IL)-3, IL-5, and granulocyte-macrophage colony-stimulating factor (GM-CSF) are particularly important in regulating the development of eosinophils [11]. Eosinophilia always occurs as a result of many processes such as differentiation of progenitor cells and proliferation of eosinophils in the bone marrow. However, eosinophilia can occur in a variety of disorders and can be classified as mild (351-1500 cells/cumm), moderate (>1500-5000 cells/cumm), or severe (>5000 cells/cumm) [11]. Eosinophilia may be classified as primary or secondary phenomenons. In primary eosinophilia, the increased production of eosinophils is due to an abnormality in a hematopoietic stem cell, for example, in eosinophilic leukemia. In secondary eosinophilia, the increased production of eosinophils is a reactive process driven by cytokines such as that occurs in the case of allergy. Increased eosinophil levels were also reported in HIV infected patients with and without specific cutaneous diagnosis and parasitic infection [12-13]. In addition, HIV infection itself may induce proliferation of eosinophils while other cell components are declining [14]. The objective of this study is to assess the eosinophil levels in HIV infected patients and to compare the eosinophil levels with white blood cells (WBC), % and absolute lymphocytes including absolute CD4, absolute CD8 and CD4/ CD8 ratio and to use as a marker of immune activation among the HIV infected patients.

Blood samples from 564 patients with HIVpositive were collected from the Department of Pathology Faculty of Medicine Ramathibodi Hospital, Mahidol University. The samples were studied for laboratory investigation including anti-HIV, lymphocyte subsets and hematological analysis. The patient population included 5 boys, 20 female adults and 539 male adults. The age of boy subjects was between 2-5 years old, whereas the average age of male and female adults was 25 years old (range 17-42 years old). Ethical approval was obtained from the Committee on Human Rights Related to

Results were analyzed and expressed as the mean ± standard deviation (Mean ± SD) and were compared among various eosinophil levels. Statistical differences between groups were tested with a non-parametric method (Wilcoxon sighed rank test, ANOVA). Spearman correlation analysis was done to determine the correlation coefficients among the quantitative data. Differences were considered significant when the p values were < 0.05.

Table 1 Comparison between Eosinophil levels, number of HIV infected patients and percent of total patients enrolled in the study. 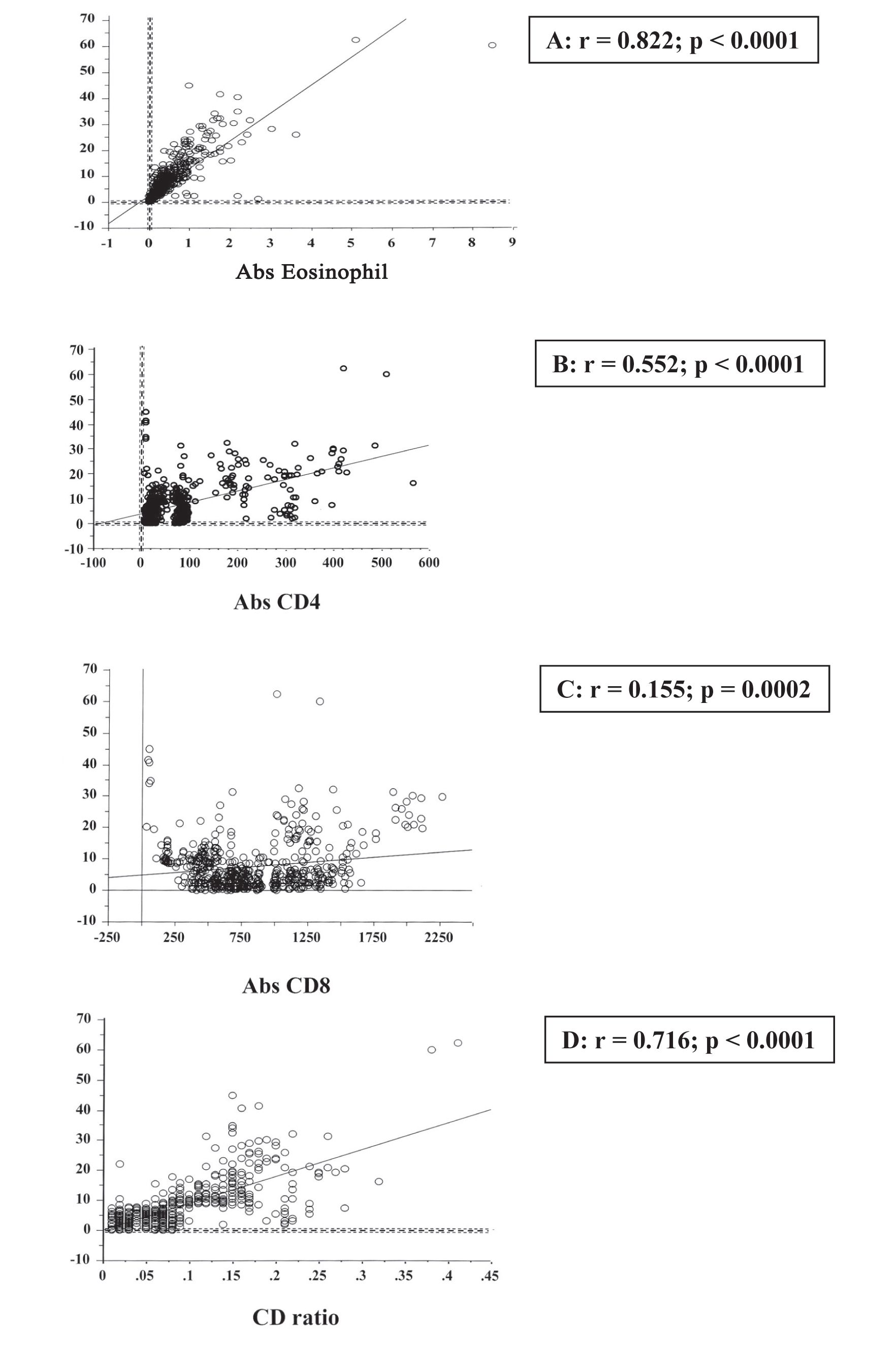 The CD4 is designed as T helper, while the CD8 is designed as T suppressor/ cytotoxic lymphocytes. According to the numbers of cells developing in the bone marrow, the physiological activity of eosinophils including cell surface receptor expression, degranulation and reactive oxygen radical production can be enhanced by the effects of granulocyte - macrophage colony-stimulating factor (GM-CSF), interleukin 5 (IL-5), and interleukin 3 (IL-3) [21-23]. These effects are probably responsible for the altered physiology of eosinophils in eosinophilia. Besides, IL-5 which plays an important role in selective eosinophilia, CD4+T cells in the various events also activate eosinophil recruitment. Recently, Kaminsky et al. [24] reported that 70.8% of HIV - infected patients with high CD4 cells have eosinophilia with or without parasitic infection. Nevertheless, the average percentages of eosinophils with parasitic infection are only 22% for hookworm, 11% for trichuris, 12% for ascaris and 13.2% for strongyloides, respectively.

Even though there were many studies showing correlation of eosinophilia in HIV infected patients with low CD4 count and some with late-stage [9,12-13,25-26]. Another study showed that eosinophil was associated with risk of progression to active TB, male gender, low socio-economic status, high CD4+ T-cell counts, and schistosomiasis [20]. The data from our study showed significant correlation between eosinophilia and Abs CD4 (r = 0.552; p < 0.0001) and also the significant correlation with the CD4/CD8 ratio (r = 0.716; p < 0.0001). We postulated that the HIV-infected patients with eosinophilia who have increased CD4/ CD8 ratio may have a better prognosis as compared with those patients who have low CD4/ CD8 ratio. However, the correlation with clinical outcome from our study was not possible due to unavailable clinical data.

The correlation between percentage of Eosinophil and CD4 lymphocytes and CD4/ CD8 ratio might refer to the immunological response in these patients, so the eosinophil estimation from the peripheral blood of the patients might be one parameter to evaluate patients’ prognosis.

The authors would like to thank all patients included in this study and staffs of Hematology Division for technical assisstance in the laboratory investigations. We also would like to thank Prof. Amnuay Thithapandha, Office of Academic Affairs, Faculty of Medicine Ramathibodi Hospital, Mahidol University for giving suggestions and improving the manuscript.