Methods: Forty-six cases were selected including the two problem cases from our previous study samples of 88. The DNA extracts were sequenced after bisulfite conversion for the epigenetic part of the GSTP1 gene, 298 base pairs, which comprised 38 CpG sites. Methylation status at the sites 10-13 and 20-22 representing in the primer used in MSP study was correlated with the expression of protein to detect the active and inactive sites. result: The two problem cases revealed methylation of CpG sites no.11, 12, 13 and no. 21, 22, suggested that these were inactive sites. The sites no. 10 and 20 were regarded as active sites. The validity was confirmed on the methylation data of the rest of 44 cases. There were 11 cases showing methylated cytosine at either CpG site no. 10 or 20. All cases showed negative for the protein. On the other hand, of the 21 cases with positive protein, none elicited methylation at CpG sites no.10 and 20.

Conclusion: The impact of location of CpG sites on the silencing of the protein expression of GSTP1 is present. There are at least two active sites at no.10 and 20. Further studies to verify the other active sites are encouraging.

DNA methylation is a well-established epigenetic mechanism in regulation of protein expression1. The conjoint mechanism is unclear whether the inhibition is dependent on level of methylation or site specific of CpG that is methylated 2 3. Regarding our finding in the previous study, there were some cases of hypermethylation found and protein present for GSTP1 in invasive breast carcinoma3. We speculated that this event might be due to positive methylation in “inactive” CpG sites. To prove this concept of some sites when methylated will affect the gene silencing on encoding protein while other sites when methylated will not, we carried out the study with Bisulfite sequencing technique to reveal the methylation status of the CpG sites that were comprised in the primer of former MSP study and verify the concept statement.

Fresh tumor tissues of breast cancer kept in the refrigerator (-80°C) were thawed. The source and specimen data had mentioned in the previous paper. DNA was isolated by phenol-chloroform method; in brief, incubate the tissue samples with proteinase K for 16-18 hours before phenol extraction and sodium acetate-isopropanol precipitation. Concentration of DNA was verified by Nanodrop 2000c Thermo Scientific.

PCR products were run on 8% polyacrylamide gel to verify the correct size.

Before the sequencing reaction, PCR products were purified with ExoSAP™ for cleanup of PCR products that eliminates unincorporated primers and dNTPs.

The sequencing reaction contains DNA template from purified PCR product, reverse primer 0.8 pmol/pl, sequencing buffer and dNTP/ ddNTP substrate from the BigDye terminator v3.1 Cycle Sequencing kit (Applied Biosystem, USA). The mixture was performed on Thermocycler and program started with 95 °C for 1 minute and 96 °C for 10 sec, 50°C for 5 sec, 60°C for 4 minutes for 25 cycles and 60 °C for 4 minutes in the final step.

Data were obtained from the previous study and the method descriptions were referred to the paper3. In order to verify the result of immunohistochemistry, the relevant stained slides were reviewed, scanned with Image Scope®, and 400 tumor cells were counted for the positive staining. The cut off was used at 10%.

The candidate active CpG sites were the rest of the CpG sites of the primer of MSP. They were CpG sites no. 10 and 20.

From Table 3, the samples of the group of MSP-related hypermethylation and non-protein expression revealed 6 out of 8 cases were found methylation involving either CpG no.10 or 20.

From Table 4, the samples of the group of MSP-related unmethylation with protein expression showed none of the 16 cases had methylation at CpG no. 10 and 20.

DNA methylation is an epigenetic mechanism that is associated with many phenomena such as gene expression, genomic imprinting, and X-chromosome inactivation4. The mechanism on the protein expression is likely complicated; the attributed factors might include level and location of methylation2. 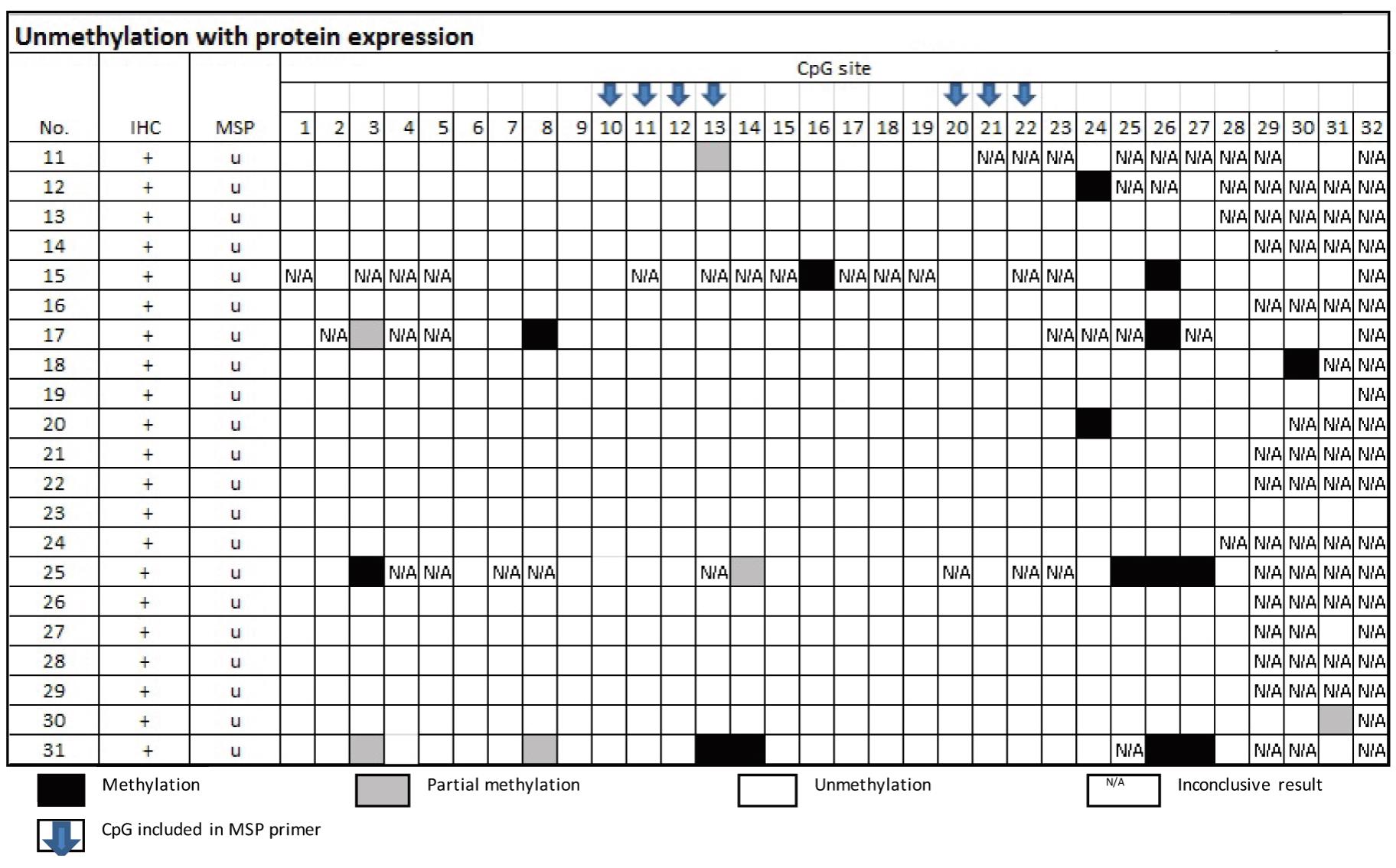 DNA methylation is the adding of methyl group into 5-carbon position of cytosine that interferes the binding of transcription factor and thus protein expression56. As natural regulation, the level of methylation can be found on reducing or inhibiting the expression of consequent protein1,6. In pathologic process, DNA methylation is attributable to carcinogenesis as well as survival prognosis and treatment response1, 5 7 8 9 10. Jain S. et al used Bisulfite sequencing to study methylation status in individual CpG sites on promoter GSTP1 gene in various diseases of the liver and found that there are CpG site specific for disease subtypes and cancer7. Lin et al. reported the correlation between CpG island specific hypermethylation and disease severity of prostate cancer11. It is possible that some sites are active and some sites are not active. In addition, active sites may work in quantitative effects.

There were papers that quoted MSP positive and protein expression, though existed in a small percentage3,12,13,14. The previous study was shown by our group for the GSTP13 and there were for MGMT,

GSTP1 and ATM by other authors 12,13,14. These discordances between DNA methylation and the protein expression were probably from the MSP-based detections of some inactive methylated CpG sites. The individual positive sites could be only viewed with a DNA sequencing technique. In this study, we conducted with Bisulfite sequencing (BS) method to disclose the methylation in individual CpG sites. The MSP-based CpG sites are corresponding to the sites no. 10-13 and 20-22, totally 7 sites. We can find that the sites no. 10 and 20 are likely to be the active and all the other five CpG sites are inactive.

BS method is laborious , not suitable for use as a routine medical test. It is essential when individual CpG methylation status need known. In addition, the method is able to reveal a long segment of DNA region and to show whether the site is partially or fully methylated. In this study, we could demonstrate the CpG sites as far as 32 sites and with some partially methylated sites and much more sites with full methylation.

Although we experimented with a limited number of samples, the findings are adequate for the explanation; however repeated studies in a larger sample size is encouraging in order to achieve a detailed solution. From our findings, the methylated CpG sites that protein GSTP1 existed are regarded as inactive. There are 16 sites namely no. 3, 7, 11, 12, 13, 14, 16, 17, 19, 21, 22, 23, 24, 25, 26 and 27. The discovery of CpG no. 10 and 20 as active sites is not explicit since the other 14 sites that were not included in the candidate inactive group are await verification. The effect of the level of methylation is also not exhibited herewith since there was not any partial methylation of the CpG no.10 and 20 belonging to the protein presence group. The only partially methylated cytosine found at CpG no.10 was associated with fully methylated CpG sites outside the candidate inactive CpG sites.

MSP is the commonly used technique due to high sensitivity, specificity and l [3, 13, 15]. It is feasible to routine. Nevertheless, the reliability is dependent greatly on the primer design. We had tried our best to search the primer that had been used for the MSP to detect DNA methylation on the promoter of GSPT1 gene and found that all the published works quoted the primer from one single source that the specificity was unknown [16]. Based on our protein expression results, the new primer design to cover more active CpG sites may need. This can be accomplished if we know the impact of the remaining CpG sites including CpG sites no. 1,2,4,5,6,8,9,15,18,28-32. On the other hand, in our current experiment, many inconclusive results of CpG sites as well as the unble sequenced CpG sites that were the no. 33-38 were probably limitation of the BS. Pyrosequencing might be the technique of choice for further investigation [17].

In conclusion, the impact of location of CpG sites on the silencing of the protein expression of GSTP1 is present. There are at least two active sites and sixteen inactive sites out of the 32 CpG sites that were investigated. Further studies to design a new primer for the MSP are encouraging.

Disclosure: The authors declare no conflict of interest in this study.

7. Jain S, Chen S, Chang KC, Lin YJ, Hu CT, Boldbaatar B, et al. Impact of the location of CpG methylation within the GSTP1 gene on its specificity as a DNA marker for hepatocellular carcinoma. PLoS ONE 7 (April 2012):e35789.