Background: Paracetamol is one of the most popular drugs used for treatment of pain and headaches. Recent evidences have indicated that long term treatment with this drug can induce the neurotoxic effect in the brain including in the hippocampal neurons, however the mechanism underlying its neurotoxic effect is still unclear. The present study aimed to investigate the effect of long term treatment with paracetamol on the expression of pro-inflammatory cytokines IL-1α and TNF-α in the hippocampus using immunohistochemistry.

Methods: Male Wistar rats (250-300 g) were divided into control and paracetamol treated groups. A single dose for 0 day and a single daily paracetamol (200 mg/kg BW, intraperitoneally) treatment for a period of 5, 15, and 30 days was injected into the paracetamol-treated group (n=5, each) whereas the control group received vehicle injections at the same volume. After finishing the treatment, all rats were humanely killed by injection of a sodium pentobarbital overdose (i.p.). The expression of pro-inflammatory cytokines (IL-1α/TNF-α) in hippocampus was studied by immunohistochemical techniques.

Conclusions: The present study demonstrates that long-term exposure with paracetamol induces an increase in the expression of pro-inflammatory cytokines (both IL-1α and TNF-α) in hippocampus. Since the increase of pro-inflammatory cytokines is associated with the degeneration of hippocampal neurons, with our present results it could be concluded that the abnormality of learning and memory in patients with long term exposure of paracetamol possibly exists.

Paracetamol (acetaminophen, APAP) is one of the most popular drugs used for the treatment of pain and several kinds of headache. Its popularity comes from various properties of this drug including the low price, high availability without any requirement of prescription and low side ef-fects1-4. It has been considered as a safe drug since almost no-side effect has been reported when using within the therapeutic doses5. However during the last decade, few studies have reported non-beneficial effects of this drug on several systems including the central nervous system (CNS)6-8. It is known that paracetamol can easily cross the blood brain barrier (BBB) [9] therefore the impact of this drug treatment on brain cells cannot be avoided.

In 2012, Posadas et al. had demonstrated that injection of paracetamol even in the doses below those required to produce hepatotoxicity could induce the neuronal cell death via the NF-KB signaling pathway10. In addition, a recent study in rats with chronic treatment (6 weeks) of this drug in combination with alcohol intake resulted in the damage of hippocampal neurons11. It is known that the hippocampal neurons are neurons in CNS which play a major role in the memory function and learning12, therefore the discovery of Fakunle et al. indicates that treatment with this drug might increase the possibility of memory impairment and learning loss in chronic usage. However the mechanism underlying this neurotoxic effect is still unclear.

Increase of pro-inflammatory cytokine production in hippocampus is well accepted as a major mechanism underlying the neuronal damage in this brain area. This mechanism is involved in several pathologic conditions related with neurodegeneration including the Alzheimer’s disease.

This present study aimed to investigate the effects of long-term treatment of paracetamol (200 mg/kg BW) on the production of pro-inflammatory cytokines (IL-1α and TNF-α ) in the hippocampus of the rat’s brain at four different time points (0, 5,15 and 30 days) using immunohistochemistry.

Adult male Wistar rats (250-300 g) were obtained from the National Laboratory Animal Center (Mahidol University, Thailand). The rats were housed in stainless steel cages and maintained with normal rat food and water under controlled environmental conditions. All procedures and tests were approved by the Ethics Committee of the Faculty of Medicine, Chulalongkorn University, Thailand (06/55).

The rats were divided into the control and paracetamol-treated groups (n=40, each). The rats were further subdivided into 4 subgroups for paracetamol treatment (n=10, each) as follows: (a) 0 day, (b) 5 days, (c) 15 days and (d) 30 days. A single dose of paracetamol (200 mg/kg of BW) was injected into the rat intraperitoneally (i.p.) at day 0 and repeatedly injected with a single daily dose for 5, 15 and 30 days. In the control group, the rats received the vehicle injections of normal saline at the same volume. The expression of pro-inflammatory cytokines IL-1α and TNF-α were determined by using immunohistochemistry.

At the specific time points, the rats were humanely sacrificed by i.p. injection of a sodium pentobarbital overdose then perfused transcardially with 250 mL of phosphate buffer, followed by 250 mL of 4% paraformaldehyde in 0.1M phosphate buffer pH 7.4. Next, the brain was removed. The thick brain slices were cut at 3 mm anterior to bregma and then immersed in a 4% paraformaldehyde 0.1M phosphate buffer. After overnight fixation, the tissues were processed for paraffin embedding. These samples were processed for immunohistochemistry.

Four brain sections were selected from each animal. Slides were scanned and digitized by using an Aperio ScanScope (Aperio Technologies Inc., Vista, CA). After that they were investigated and analyzed by using ImageScope v.12.0.0.5039 software (Aperio Technologies Inc.). The immunore-action was analyzed for positive pixel counts with an optimized algorithm for cytoplasm staining (Positive

Pixel Count v.9 parameters). Immunoreactivity of pro-inflammatory cytokines IL-1α and TNF-α are reported as % of positive pixel per square millimeters (pixel intensity/mm2). Each slide was evaluated by two independent observers who were blinded to the animal classifications.

Long-term treatment with paracetamol increases pro-inflammatory cytokines in hippocampus of the rat’s brain: 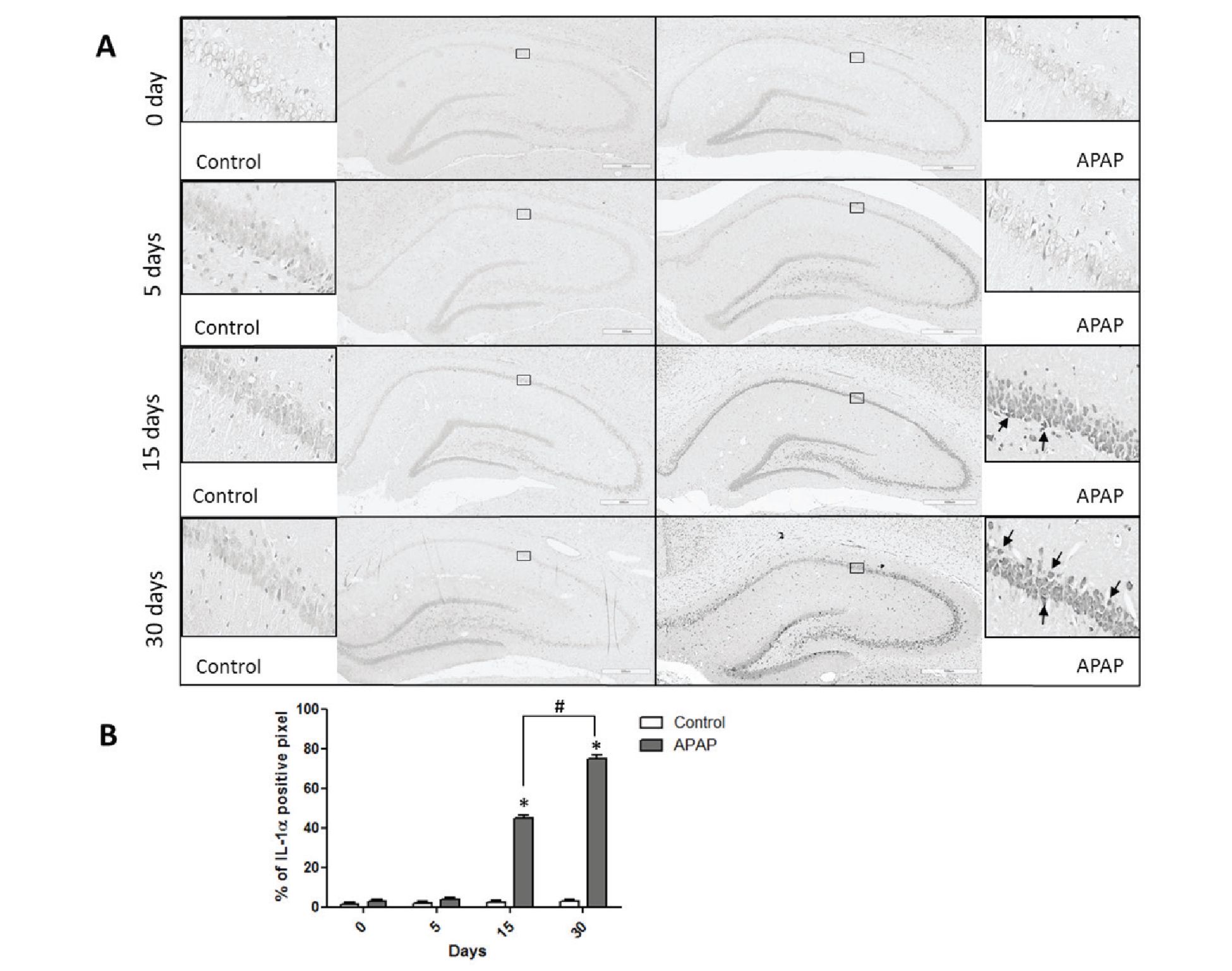 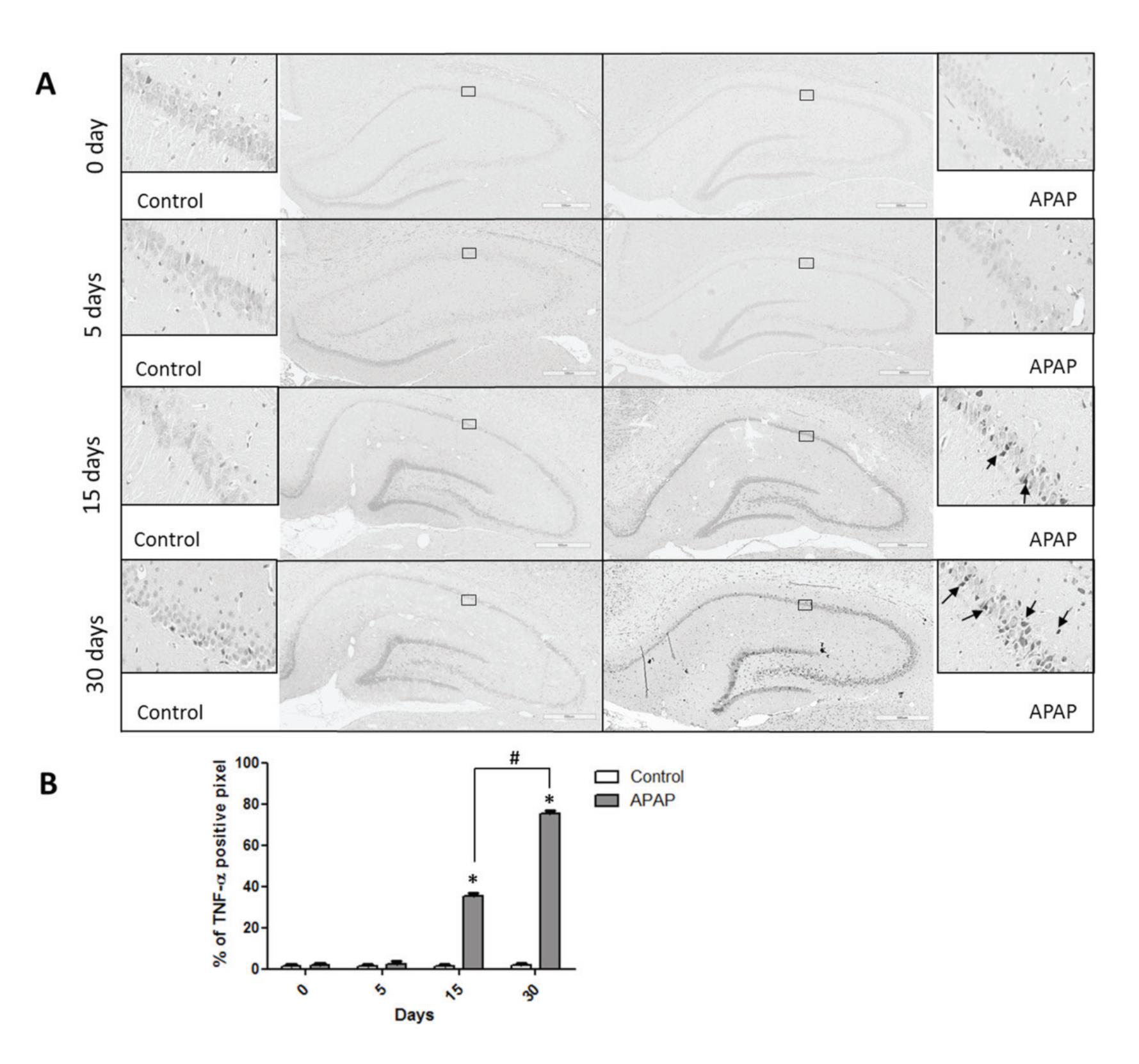 Concerning the effect of paracetamol treatment on the hippocampal neurons which are the neurons responsible for memory and learning function, several studies have demonstrated that this drug can provide either protective or non-beneficial actions on these neurons. Several in vitro studies have revealed that paracetamol treatment could protect neurons including hippocampal neurons from several pathologic conditions such as oxida-

tive stress, and activation by amyloid P-peptides19-21. The neuroprotective action of this drug is suggested to be mediated via the antioxidant property and anti-inflammatory action of this drug19-21. A recent study in rats by Blecharz-Klin et al. has demonstrated that long-term treatment with a low dose of paracetamol results in the alteration of neurotransmission in hippocampus and enhancement of the working memory23. However, unusual non-beneficial effects of paracetamol on the hippocampus were gradually reported11, 23. The study in rats by Chen and Bazan has revealed that paracetamol could reduce hippocampal long-term potential (LTP). This effect was suggested to be mediated via a presynaptic 5-HT2 receptor activation23. In 2011, Fakunle et al. demonstrated that paracetamol treatment for 6 weeks (in combination with alcohol intake) could result in the loss of neuronal cells in hippocampus11. In this study the increase in the pro-inflammatory cytokine production in hippocampus was evident in rats with long-term treatment with paracetamol. Since the increase in pro-inflammatory cytokine is well accepted as a major factor involved in the damage of neurons, thus the increase in the hippocampal expression of IL-1α and TNF-α observed in this study can be one mechanism underlying the neurotoxic effect of paracetamol in hippocampus.

Our data also demonstrated that short-term treatment with paracetamol do not have any effect on the pro-inflammatory cytokine production in the hippocampus. This result strongly suggests that paracetamol treatment is safe for short-term exposure; however, long-term treatment with this drug (more than 15 days treatment) demonstrated different outcomes since it could induce the pro-inflammatory cytokine expression (IL-1α and TNF-α) in this brain area.

Thus, our results provided the evidence that confirms the adverse effect of this drug regarding the duration of the treatment. This part of the result is in line with several evidences reported during the last 10 years. Many adverse effects of long-term treatment with paracetamol were gradually revealed on several systems including the CNS17, 24-25. It is known that the majority of this drug, after reaching the circulation, is mainly metabolized in the liver via conjugation with glucuronic, sulphate, or cysteine and then excreted into the urine as a non-toxic metabolite. Only a small fraction of this drug is metabolized by cytochrome P-450, resulting in the formation of n-acetyl-p-benzoquinone imine (NAPQI) [26-27]. The NAPQI is a toxic substance, after forming it is quickly captured by glutathione (GSH) and also excreted into the urine. The CYP2E1 is the most abundant isoform of cytochrome P-450 which is expressed in several organs including in the brain 17, 28-29. The presence of this enzyme in neurons, astrocyte, microglia and endothelial cells were reported through several studies6, 30-31. Although CYP2E1 in the brain is presented at low levels, its activity is actually higher than those observed in the liver32. In this case, after paracetamol reaches the cerebral circulation, it can pass through the BBB and be metabolized into NAPQI by those cells which express CYP2E1. As mention earlier, NAPQI is a toxic substance, thus it will be detoxified quickly by brain GSH. In case of a high concentration of paracetamol, the excessive level of NAPQI can either directly bind to cellular proteins leading to the cellular damage and death17, 27, 33-34 or indirectly induce the depletion of GSH in the brain. It is known that the depletion of GSH can result in the increase of oxidative stress which consequently alters the balance of pro-inflammatory cytokine production27. Therefore, we suggest that long-term treatment with paracetamol can lead to the increment of NAPQI formation as well as oxidative stress. These phenomenon can finally cause an increase in the pro-inflammatory cytokines expression in several regions of the brain including hippocampus.

The authors gratefully acknowledged Professor Pichet Sampatanukul for his valuable comments and suggestions. This study was supported by the National Research Council of Thailand (NRCT, GRB_BSS_48_55_30_07) and Thailand Research Fund (RSA 5580034).

25. Ward B, Alexander-Williams JM. Paracetamol revisited: A review of the pharmacokinetics and pharmacodynamics. Acute Pain 1999; 2: 139149.

34. Moskowitz MA. Neurogenic inflammation in the pathophysiology and treatment of migraine. Neurology 1993; 43: S16-S20.