The finding of asbestos bodies in lung fluid aspirates represents definite evidence of having prior exposure to asbestos, and having asbestos fibers entering the bronchial tree. After entering the lung, fibers undergo a coating process with ferritin protein to form asbestos bodies. The present study was carried out with the aim of determining whether asbestos bodies could be detected in the lung fluids of cadavers undergoing autopsy at the Pathology Department of the Ramathibodi Hospital during the period of November 2012 -October 2013. Twenty six corpses were randomly included in the study, without specific selection for occupations more likely to result in asbestos exposure. Their sex, age, occupation, diagnosis and home addresses were recorded. The lung fluid specimens were obtained by injecting 150-200 milliliters of normal saline into the lung via a naso-gastric catheter inserted into the bronchial tree, and withdrawing fluid from the lung. Subsequent microscopic examination for asbestos bodies in the fluid specimens was made by the method employed by De Vuyst et al.

The study revealed negative finding in all specimens, with no asbestos bodies identified in aspirates from any of the 26 cases. Such results may be interpreted as indicating that either all subjects studied were exposed to low level of asbestos, which is not detectable using this technique, or had exposure with successful expulsion of the inhalant. However, the presence of asbestos bodies in the lung tissue cannot be completely excluded.

Because of its strength and durability, asbestos, the group of silicate compounds, has been used world-wide in several industries, such as lagging and construction materials, for a century or longer. In Thailand, many types of asbestos have been imported for industrial use since 1938. For the time being, information regarding the health hazards from various types of asbestos has substantiated strong epidemiological links to parenchymal lung disease (asbestosis) and mesothelioma.1 Only chrysotile, the least toxic form of asbestos, remains in use from 1980 up to the present. However, during this period of time, there has been only one probable case of asbestosis who concomitantly developed talc pneumoconiosis; the inhalation of asbestos fiber-contaminated material used for manufacturing body soothing powder was suggested to be the cause of disease in this case.2 Moreover, amongst the 80 documented cases of mesothelioma in this country, only four patients gave a verbal past history of working in factories using asbestos, but none of them had been found to show asbestos bodies in biopsied specimens.3-6 Therefore, the available academic evidences for asbestos use in Thailand has not so far supported the significant hazards by asbestos.7

The purpose of this study was to examine the lung fluid of random autopsy cases to determine whether or not asbestos bodies could be identified using this technique from persons who might inhale asbestos in general atmospheric contamination.

The study was carried out during the period from November 2012 to October 2013. Twenty six autopsy cases were randomly selected as depending on the available working time. Their sex, age, occupation, home address and diagnoses were recorded (Table 1). 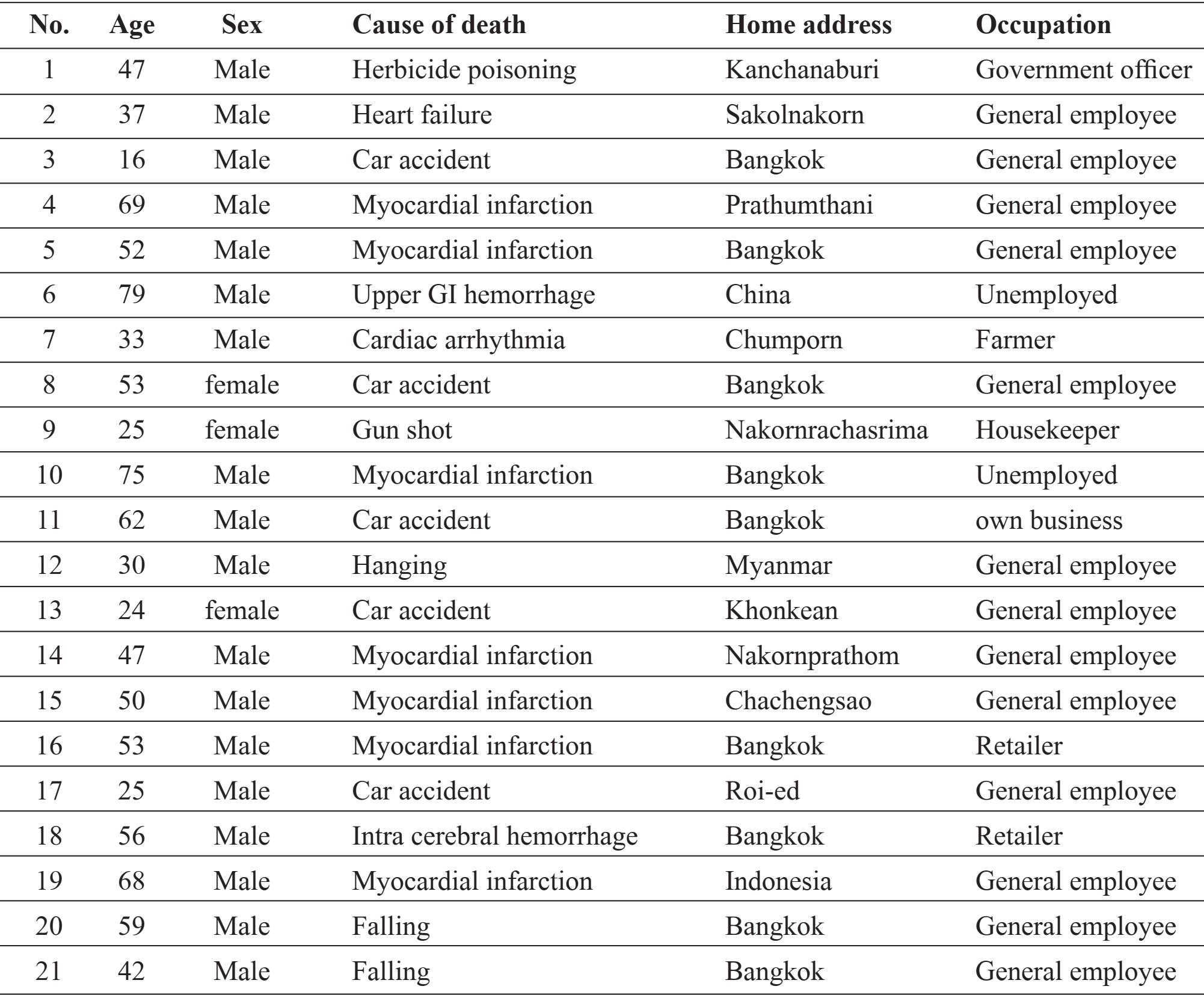 The right main bronchus was clearly dissected. Naso-gastric (NG) tube was inserted in to right main bronchus and placed into right lower lung segmental bronchus automatically. Collections of lung fluid specimens were made by injection of 150-200 ml of normal saline via a NG tube, washing and then withdrawal of the fluid from the lung.

10 ml of washed fluid was mixed with 10 ml of sodium hypochlorite; the mixture was left for 10 minutes for digestion an organic component. The digested fluid was filtered through the 0.45 micron diameter Millipore filter. The filter was stained with Prussian blue and examined under light microscopy. This method of identifying asbestos body was described in earlier studies.8, 9 According to prior study, asbestos bodies were identified by morphology consisting of transparent fibrous core coated with beaded ferro-protein with or without dumbbell-shaped end. 10

There were no asbestos bodies found in the lung washing fluid specimens obtained from this particular group of subjects.

The presence of asbestos bodies in the body tissue or in visceral lavage fluids, would denote that asbestos fibers had successfully gained entry into their body; the exposed persons might or might not or not then go on to develop an asbestos-related disease.12

In the respiratory system, asbestos bodies are formed on inhaled asbestos fiber and accumulated in the airways, intra-alveolar space or buried in the interstitium. Asbestos bodies which deposited in intra-airway and intra-alveolar space can be detected from washing bronchio-alveolar lavage fluid, whilst those remaining which deposited in the interstitium should be detectable on histological lung tissue examination. According to prior studies, asbestos bodies were typically identified from 0-50 bodies/ gram lung tissue and less than 1 bodies/ml of lavage fluid in the general population.10-12 Moreover, some studies demonstrate roughly correlate between asbestos bodies in lung parenchyma and lavage fluid but the subjects in all studies are asbestos exposed workers which have or have not had asbestos related disease.13-14 In our Thai general population, Sriumpai et al demonstrated 33% of 330 cases showed asbestos bodies in autopsy derived lung tissue, compared to none of the cases examined here demonstrating asbestos bodies from washing fluid in our study.15

Thus, the negative findings in the present study might be interpreted in several ways. First that the subjects in our study might be exposed to low levels of asbestos, that were unable to be detected from lung fluid only, or that the incubation period for developing asbestos bodies from inhaled asbestos fibers required a longer time before becoming detectable by our method. Moreover, as the sole type of asbestos used in this country is now the chrysotile type, which is thinner than amphibole fiber, more fragile , and more easily breakable into tiny fragments, rapid clearable from lung tissue resulted in less asbestos-bodies formation. Similar studies examining cases of known occupational asbestos exposure or established asbestos related disease such as mesothelioma may allow the sensitivity of this technique to be more clearly established.

Funding for this research was provided by ORANVANICH COMPANY LIMITED and KI-TERNIT FIBRE CEMENT CO.LTD.