Materials and methods: We retrospectively analyzed the prognostic value of LNR from the survival outcomes in patients with non-metastatic breast cancer from the medical records of 122 female Thai patients who underwent modified radical mastectomy, from 2009 to 2011. The median length of follow-up was 44 months. Based on the LNR, the patients were divided into low (LNR 0.01-0.20), intermediate (LNR 0.21-0.65) and high (LNR 0.66-1) risk groups. Survival outcomes were estimated by the Kaplan-Meier method while the log rank test was used to assess the significance of groups compared in survival. Exploring potential variables for their independent prognostic effects were determined by Cox proportional-hazards regression model. Results: Univariate analysis indicated that high LNR, as well as the presence of lymphovascular space invasion and local recurrent tumor were correlated with poor overall survival. In contrast, tumor expression of the estrogen receptor and patients receiving anti-hormonal therapy were associated with better survival outcomes (p-values <0.05). Multivariate analysis found anti-hormonal and LNR were independent predictors of overall survival (p-values <0.017).

Metastasis status of axillary lymph node determined by pathologic examination is one of the most important prognostic factors in breast cancer12. American Joint Committee on Cancer/ International Union Against Cancer (AJCC/UICC) TNM staging system (2002), classified lymph node burden (pN staging) based on the number of positive axillary lymph nodes into three groups: pNl, 1-3 metastatic lymph node(s); pN2, 4-9 metastatic lymph nodes; and pN3, 10 or more metastatic lymph nodes23. Higher nodal disease is associated with poor overall survival and increased risk for locoregional recurrence4. In the past decade, several studies that included positive lymph nodes and total dissected lymph nodes reported that the LNR or percentage of involved nodes (LNR x 100) had improved the prognostic indicator of axillary node burden5’6’7 8. Vinh-Hung et al. identified the cutoff points of LNR in breast cancer and categorized them as low (LNR 0.01 - 0.20), intermediate (LNR 0.21 - 0.65) and high risk groups (LNR 0.66 - 1.00)7’8. He showed that LNR predicts survival in breast cancer more accurately than the pN staging7-8. However, there were inconsistent findings of the prognostic value of LNR on Asian breast cancer patients910. To the best of our knowledge, this is first study to evaluate the prognostic value of LNR in Thai breast cancer patients.

We retrospectively analyzed the medical records of 122 women who were diagnosed with invasive ductal carcinoma, NOS. All of them underwent modified radical mastectomy between January 2009 and December 2011. The patients with evidence of metastasis at the time of diagnosis were not included. The study (MSKH58/007) was approved by the Human Investigation Committee, Maha Sarakham Hospital. Clinicopathological data included: age, tumor size, tumor grade, T stages, N stages, M stages, pTNM stages, presence of lymph-vascular space invasion (LVSI), local recurrent, number of total axillary nodes examined, number of metastatic lymph nodes, estrogen receptor (ER) status, progesterone receptor (PgR) status, Her-2 status, chemotherapy, radiotherapy and anti-hormonal drug. Follow up for each patient was calculated from the date of operation to the date of death or date of last follow-up (Sep, 15 2014) (Table 1). The endpoint was overall survival (OS) defined as the time from any cause of death. They were obtained from the hospital records and by linkage with provincial department of dead registry.

Statistical analysis: Survival outcomes were estimated by the Kaplan-Meier method while the log rank test was used to assess the significance of groups compared in survival. Stepwise Cox proportional-hazards regression model was used to determine potential variables for their independent prognostic effect. Statistical analyses were performed with SPSS 17.0 (KKU license). All statistical assessment values ofp<0.05 were considered significant.

For multivariate analysis, we used the Cox proportional-hazards regression model to show the independent prognostic effect of LNR on patient survival (p-value <0.0017) (Table 2). 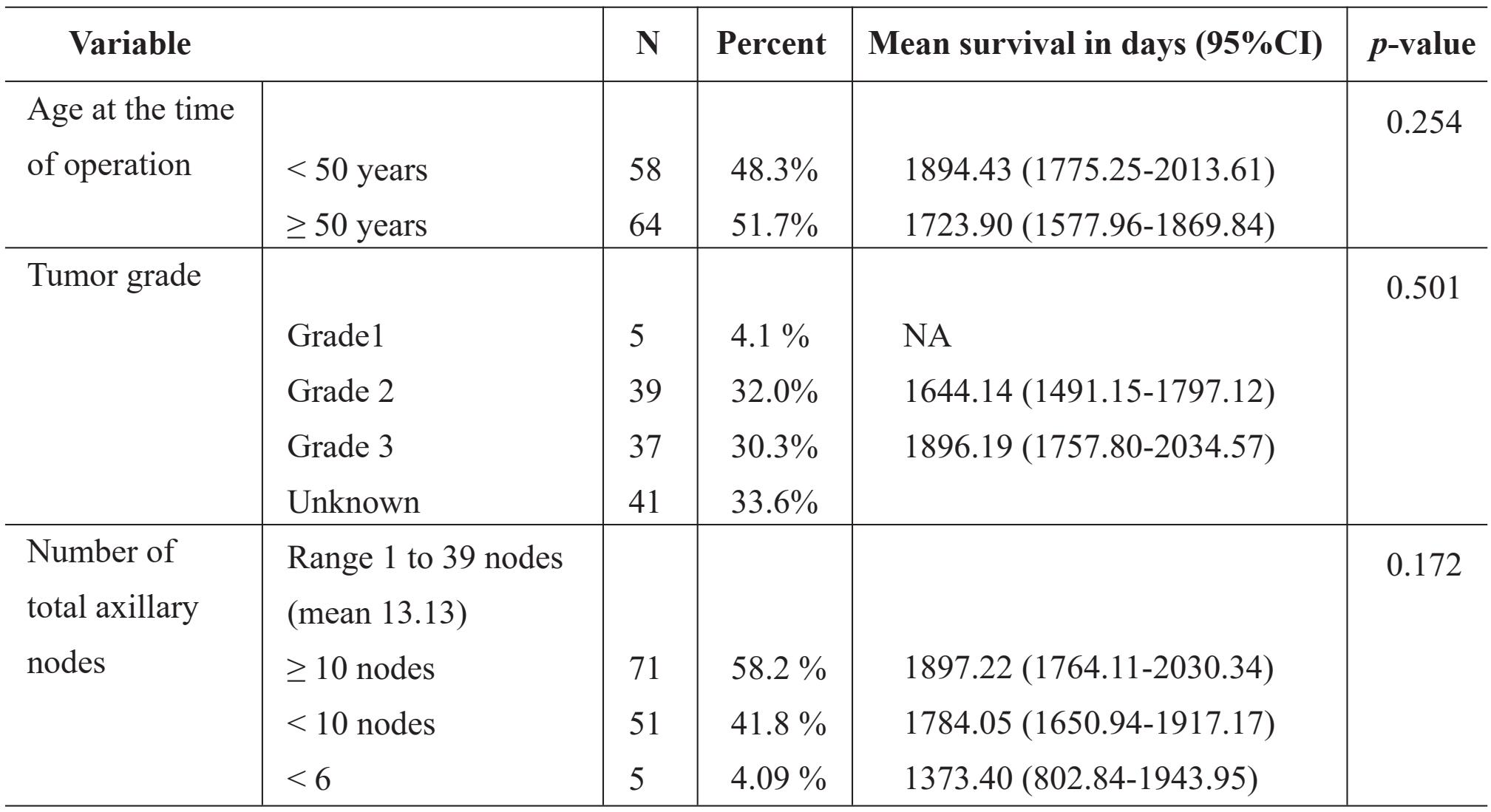 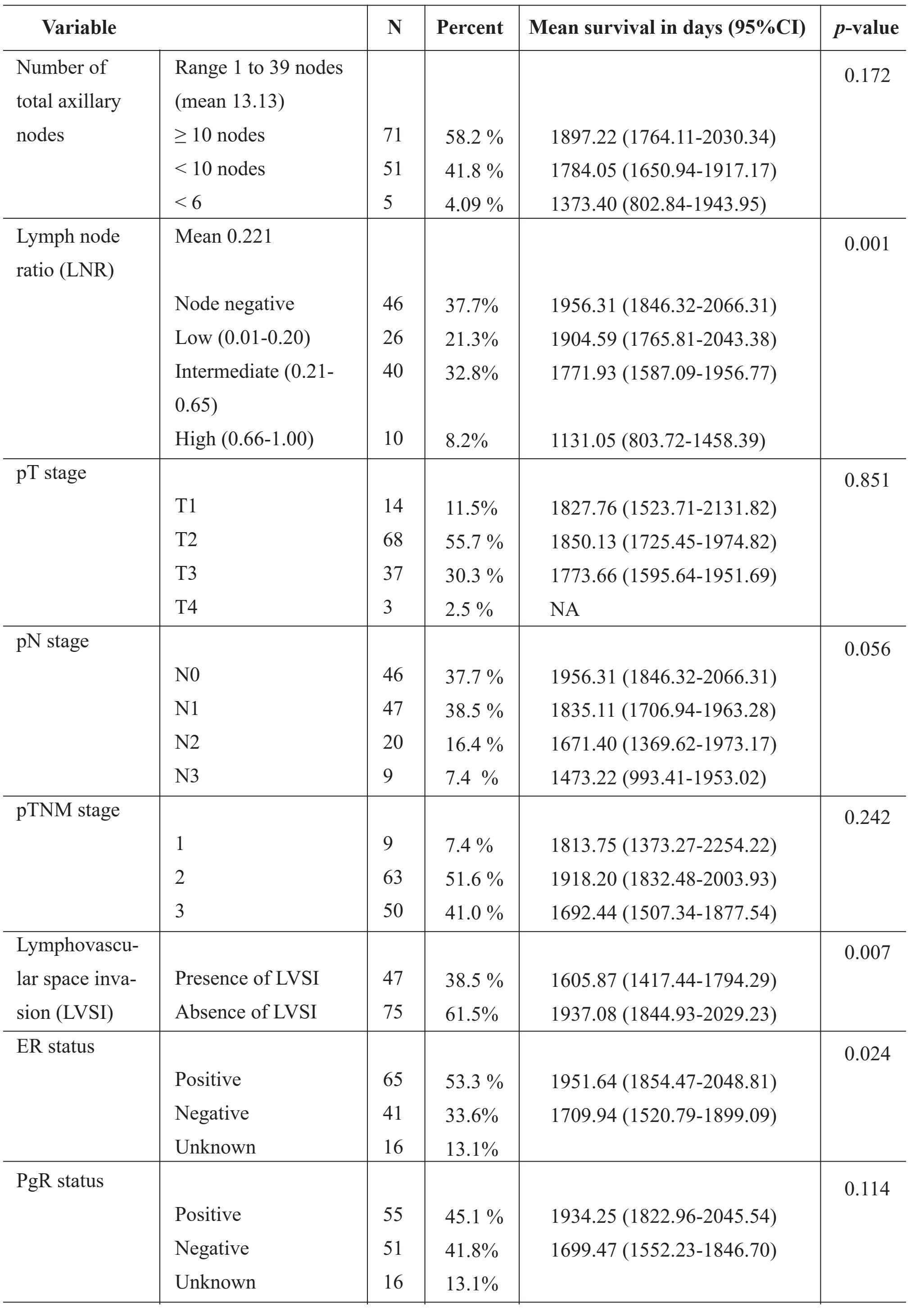 Table 2 Multivariate analysis for survival probabilities and hazard ratios for all cause mortality. 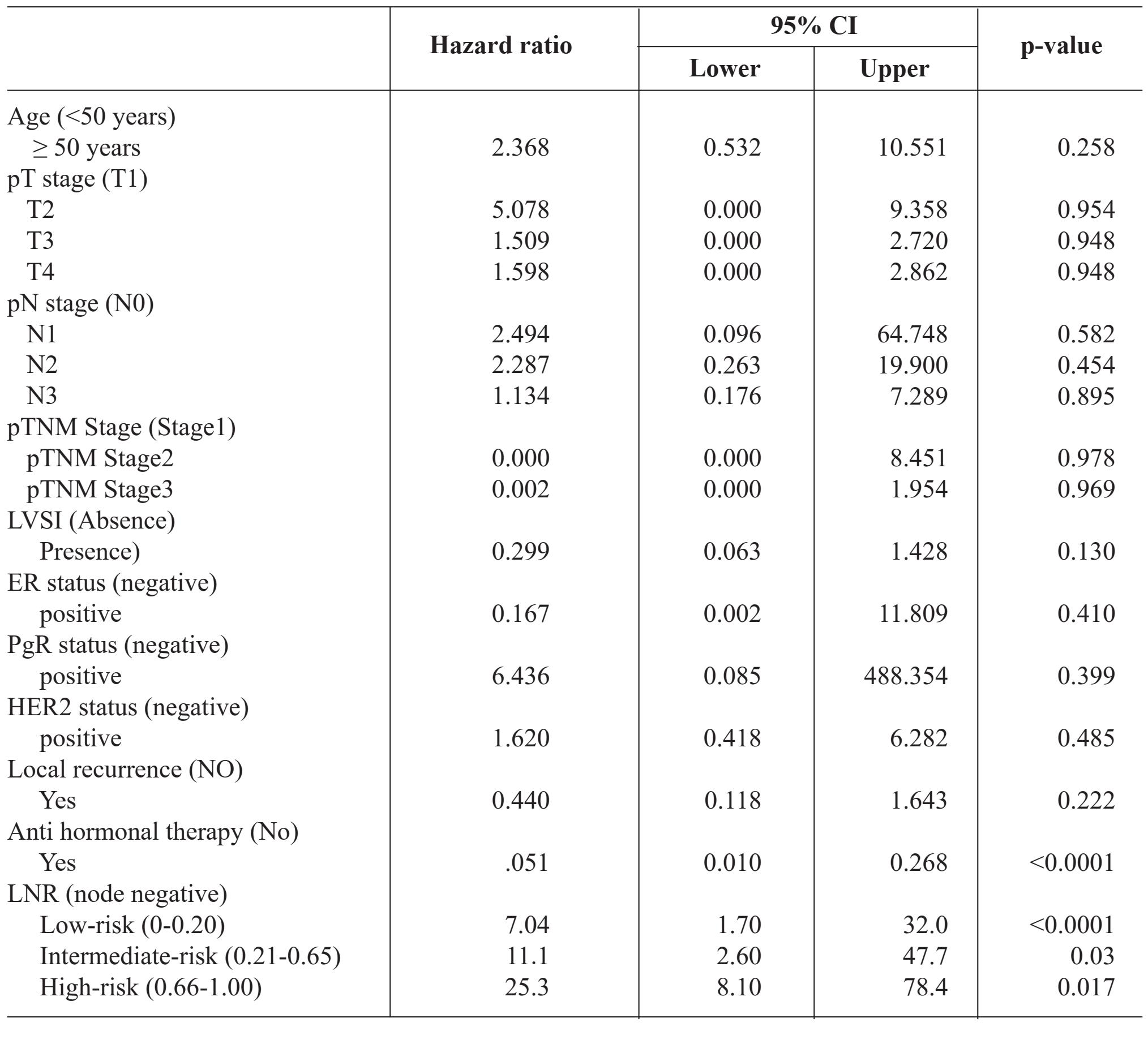 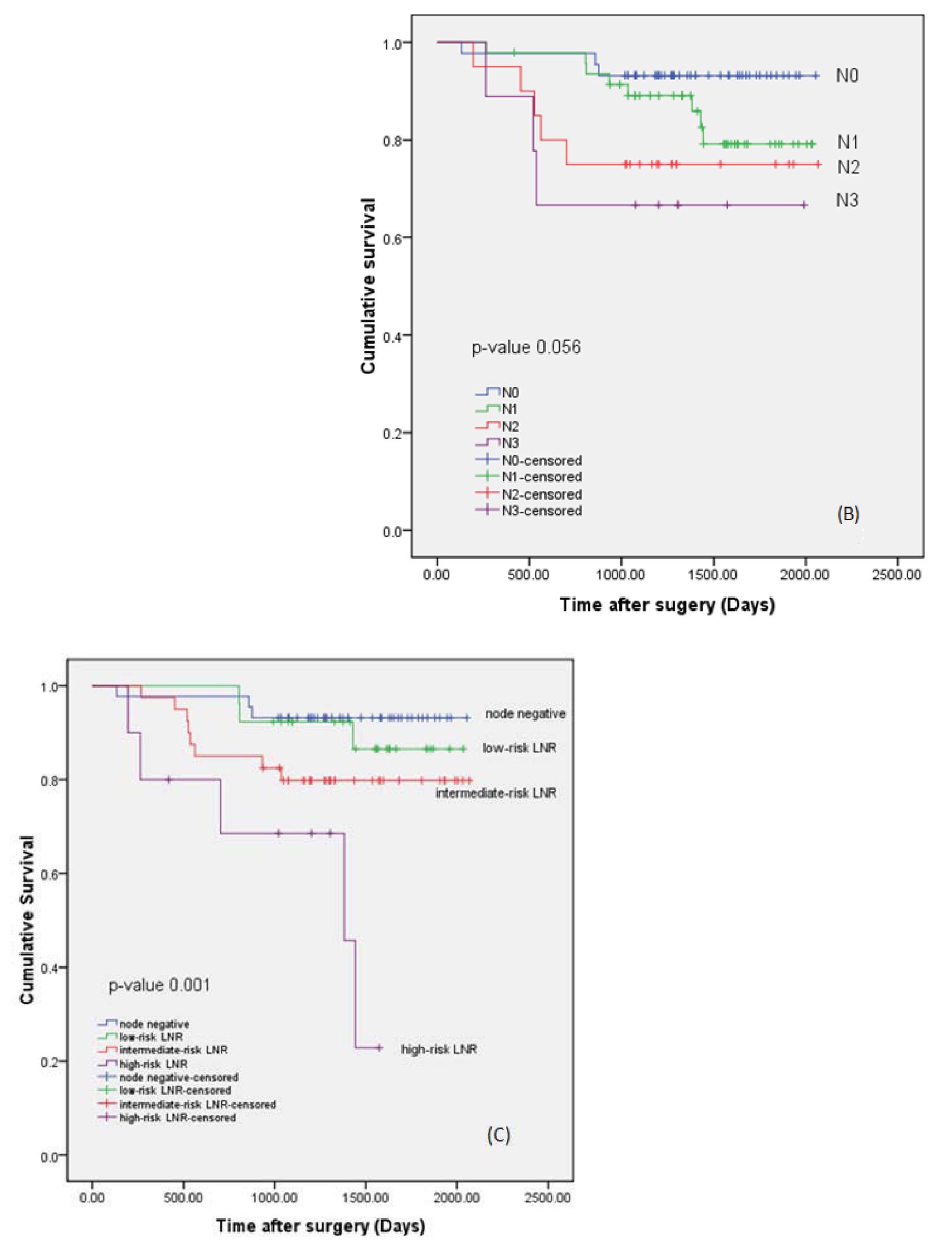 Although the axillary lymph nodes status is considered the most important prognostic factor in breast cancer patients1,2,4. The ideal means by which to classify lymph status remains controversial. The current AJCC staging system uses the increasing absolute number of positive nodes to classify patients (pN stage)2,3. Vinh-Hung and colleagues identified and verified classified cutoff values for LNR7,8. They concluded that these LNR cutoff points define breast cancer prognosis more adequately than the pN categories7,8. Several subsequent studies and a meta-analysis had confirmed the validity of risk categorization according to this hypothesis11,12,13. We tested the applicability of these cutoff points on our data. The presented data confirm node status as a strong independent factor in univariate and Cox regression multivariate analysis. We found that LNR could not only predict overall survival, but this variable had prognostic value independent of traditional clinicopathologic factors. Moreover, LNR was a stronger prognostic variable for overall survival than the currently used variable, pN staging. Univariate analysis showed that the pN stage was the favorable variable in predicting the overall survival of patients, however it was not statistically significant (p = 0.056). Various factors might explain these findings: (1) the number of patients was too small to detect a small effect on survival; (2) a relatively short follow up time, and (3) the number of inadequate axillary node dissections causing the under staging of the pN stage. In the current staging system, the pN stage for predicting disease burden was confounded by the number of nodes removed14. The minimal number of nodes required to establish lymph node metastasis is unclear. The American Joint Committee on Cancer (AJCC) recommends that at least 6 axillary lymph nodes should be removed and examined 215.

However, it is generally accepted that at least 10 nodes should be removed to accurately stage the axillary lymph nodes6,15,16. While only 5 out of 122 patients had less than 6 axillary lymph nodes, 51 out of 122 had less than 10 axillary lymph nodes. The latter group could cause under staging in the pN stage, because it is likely to find positive nodes in the axilla increasing with the number of nodes dissected and nodes examined. Additionally, the most obvious change of prognosis occurred between node negative to node positive status17. If all patients underwent the same extensive axillary dissection, the distinction between a number-based and a ratio-based staging would disappear18. A possible explanation for the better prognostic value of the node ratio might be that the node ratio can be interpreted as a more standardized form that reflects both the number of node positive and the number of nodes examined6,18. In other words, 2 positive nodes out of a total 6 nodes examined has a different implication than 2 positive node out of a total 10 nodes examined in LNR, however, the implication is the same in pN staging. At least 10 axillary lymph nodes are required in axillary dissection; however, in routine practice heterogeneity of lymph node retrieved is commonly utilized19. Our results support studies that considered LNR as a prognostic factor in cases with a limited number of lymph node dissections14,15,19.

Outside lymph node involvement other known factors are relevant to breast cancer prognosis, univariate analysis indicated that the expression status of the estrogen receptor, local recurrent and anti-hormonal therapy were associated with survival rate. Our study included breast cancer, NOS type patients, in whom the majority were luminal A and B type breast cancers. Patients with this type of breast cancer usually have good prognosis and are resistant to chemotherapy while exhibiting sensitivity to hormonal therapy2,17.

Our study clearly has a number of limitations. It is a retrospective study within a single institution, in which the small sample size did not represent the greater population. It may be biased in terms of patients and treatment selection. The advantages of this study include the time allowed for follow up; the uniform guidelines utilized in surgical intervention and uniform pathological examination. All the patients underwent modified radical mastectomy, making it possible to compare the patients in axillary node negative and node positive groups. Since the Thai population registry department does not register the cause of death, only all-cause mortality could be determined. Therefore we were only able to determine the role of LNR as a prognostic factor for overall survival and not for breast cancer-specific survival.

The patients in this study were treated in the pre-sentinel biopsy node era. However, a number of studies have demonstrated the value of evaluating the ratio of the number of positive sentinel lymph nodes to the total number of sentinel nodes removed to determine the probability of axillary node metastasis20. No further dissection is performed when the sentinel nodes show no tumor involvement. However, when a sentinel node is involved, a complete axillary dissection is recommended2021. Our results support the use of LNR as a tool for more accurate prognostic assessment than using the pN stage. In addition to breast cancer, LNR has been widely demonstrated to be a useful alternative node classification to predict prognosis in many other cancers, including gastric cancer22, colon cancer23-24 and pancreatic cancer26. The concept of this ratio suggests that cancer is a disease of progressively increasing severity21-26.

This study confirmed that the percent of positive axillary lymph node metastasis could predict survival in patients with non-metastatic breast cancer. We further suggest that the LNR should be included in pathological reports of modified radical mastectomy specimens.

We thank Christina Sunyoung Kim for detail suggestions and assistance with the English language presentation of the manuscript.

22. Marchet A, Mocellin S, Ambrosi A, et al. The Ratio Between Metastatic and Examined Lymph Nodes (N Ratio) Is an Independent Prognostic Factor in Gastric Cancer Regardless of the Type of Lymphadenectomy. Ann Surg. 2007 Apr; 245(4): 543-52.