Myocardial infarction (MI) is an anatomical change owing to an irreversible ischemic injury to focal cardiac myocytes. On one hand, its pathological presentation uniformly presents with death of cardiac muscles, on the other hand, its etiology can be from several ways. In the majority of cases, coronary artery atherosclerosis is the main underlying cause. Diagnosis of acute MI is usually made by clinical presentation, specific EKG patterns, and increase in serum cardiac enzymes. MI, either recent or old, is often identified and sometimes significantly contributes to a cause of death during a routine forensic autopsy practice in a sudden unexpected death. Although medico-legal cases tend to be unnatural causes of death, it has been shown in many literatures that coronary artery atherosclerosis is one of the most common causes of death in the cases which are eventually proven as natural deaths. However, if myocardial infarction or scar, and also coronary artery stenosis cannot be seen during an autopsy, several unnatural causes, especially toxicology, should be considered and needed a further investigation.

Whenever MI symptoms present, necessary investigations such as coronary angiography should be performed to make the definite diagnosis and provide a proper treatment. Many cases show abnormal findings on a coronary angiogram, nevertheless, some of them are normal. Therefore, the term myocardial infarction with normal coronary artery on angiogram (MINCA) was introduced to such those cases1. Even though there have been lot of studies about MINCA since 1980’s, a number of studies in a pathological aspect are still low. Moreover, clinical investigations may have some limitations in comparison to autopsy findings,

i.e. an angiogram may not show an anatomical pathology outside coronary lumen such as coronary bridging. This study reviews the probable causes of MINCA and may hopefully be useful to both anatomic and forensic pathologists, perhaps to clinicians, in the cases with MI with causes other than coronary stenosis.

Till present, most studies were autopsy case reports and clinical studies based on angiogram findings. There was the only one pathological study by Silvanto et al. in 2012 which was a review study in sudden cardiac deaths using the database from the referral center in UK.2 In this study, 19 MI cases without coronary artery disease were included and therefore concluded that myocardial infarction in patients with normal coronary artery had multifactorial etiologies, including toxicological factors such as alcohol and drugs.

Coronary artery spasm (CAS) is one of the most controversial issues in cardiovascular pathology. Even though its pathophysiology is well-accepted in medical community, there is a recommendation for a pathologist not to diagnose from an autopsy unless a regional infarct is obviously determined.2 CAS can present with variable clinical degrees, ranging from angina, silent myocardial ischemia, to a sudden death. Major risk factors of CAS include smoking, high-sensitivity C-reactive protein, and old age9. The causes and mechanisms of CAS are still poorly understood and thought to be multifactorial. The proposed pathophysiology includes abnormality of autonomic nervous system, endothelial dysfunction and oxidative stress causing decreased nitric oxide (NO) activity10 and various predisposing genetic and biochemical factors such as endothelial NO synthase gene, paraoxonase I gene, adrenergic and serotoninergic receptors, angiotensin-converting enzyme, and inflammatory cytokines9. The most common types of CAS are Prinzmetal angina and drug-induces CAS.

Prinzmetal angina or variant angina is a rare condition and was first described by Dr. Myron Prinzmetal in 1959.11 The term “variant” is used to differentiate this clinical entity from classic angina pectoris. Variant angina is described when the symptom occurs at rest or during a non-exerting activity. CAS is thought to be a cause of variant angina and is postulated to be due to many mechanisms such as acetylcholine-induced NO, impaired fibrinolysis causing platelet-released thromboxane A2, and increased alpha-adrenergic receptor activity on epicardial coronary arteries.9,43-44

In teenagers, many illicit drugs were found to be associated with CAS, including cocaine, marijuana, butane, toluene, amphetamine, ecstasy, LSD, heroin, and Khat.12 Stimulation of sympathetic nervous system might probable be the common mechanism of CAS. In case of heroin abusers, enhanced parasympathetic activity was proposed to initiate the process of vasospasm, nevertheless, the true mechanism is still controversial and debatable.13 Besides illicit drugs, therapeutic medications have also been reported to cause CAS including over-the-counter drugs, chemotherapeutic agents, antimigraines, and antibiotics.12

Cigarette smoking is an important precipitating factor of CAS in both atherosclerotic and non-atherosclerotic patients. Smoking is known to increase risk in plaque erosion and rupture. It is also a major risk factor of vasospasm susceptible to concomitant agents. Cocaine and amphetamine derivatives consumption causes similar effects on the cardiovascular system, mainly via activation of sympathetic nervous system. The pathogenesis of myocardial infarction in the drug-users includes an increase in myocardial oxygen demand, marked vasoconstriction of the coronary arteries, and enhanced platelet aggregation and thrombus formation.12 Figure 1 shows coronary artery thrombosis without atherosclerotic plaque rupture in an anti-obesity medication user (phentermine-fenflur amine).

Cocaine and amphetamine derivatives themself have an atherogenic effect. Coronary atherosclerosis was found more commonly in fatal cocaine users rather than in opioid overdose and hanging cases.14 In addition, methamphetamine is also able to cause several cardiovascular pathologic conditions, including premature atherosclerosis.15

A number of case reports described MI in patients without atherosclerotic coronary artery disease which were obstructed by thrombus owing to thrombophilic disorders such as antiphospholipid syndrome16, protein C deficiency17; or myeloopro-liferative diseases such as essential thrombo-cythemia.18

Many genetic risk factors such as mutation in factor V Leiden or pro-thrombin genes are able to be potential risks of having venous thromboembolism but are less likely to have an effect in the arterial system.19 However, many studies demonstrated the association between thrombophilic gene polymorphisms and coronary thrombosis in young individuals who developed acute myocardial infarction without any identifiable cardiovascular risk factor.20-22 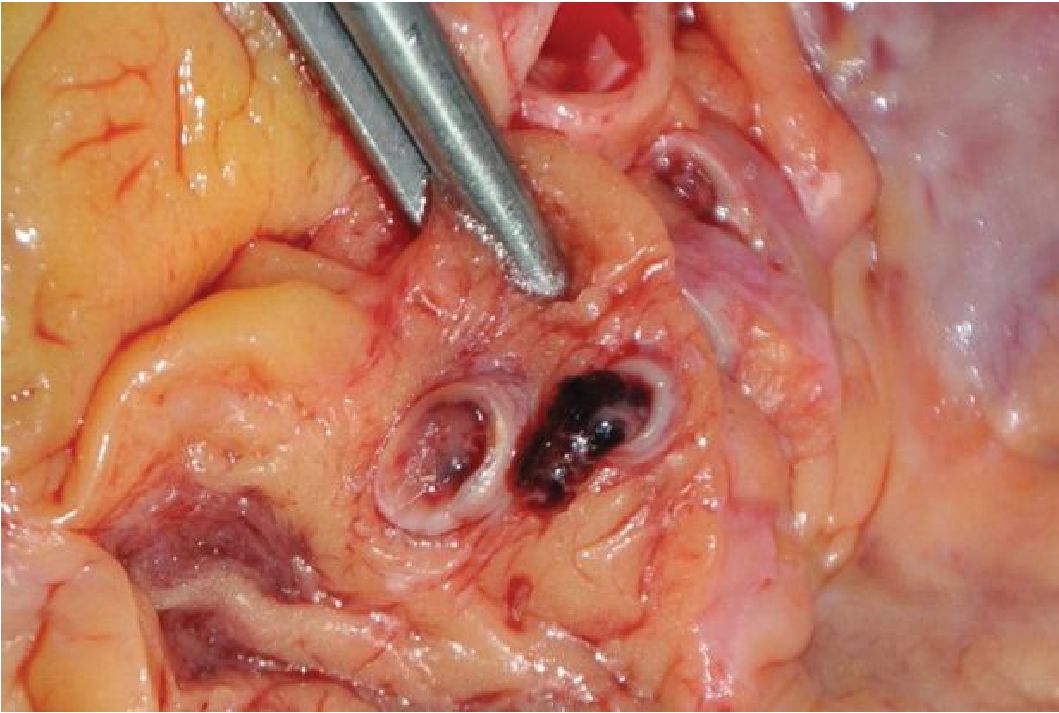 If coronary thrombosis without plaque rupture is detected in an autopsy, a set of screening tests for antiphospholipid antibodies, lupus anticoagulant, and myeloproliferative disorders may be helpful to determine a cause of thrombosis. Several popularly cited articles recommended that tests for venous thrombophilia should be performed after the acute thrombotic event or after cessation of vitamin K antagonist therapy for at least 6 weeks,23. These are because the effect of acute thrombosis or vitamin K antagonist may give false positive results. In contrast, tests for arterial thrombophilia were found to be much less influenced by the effects of acute thrombosis and can therefore be performed soon after an acute thrombotic event.24 Particular genetic tests including factor V geneotyping at 1691 locus, prothrombin genotyping at 20210 locus and etc. should be done in a young individual whose strong family history of thrombophilia is presented.19

Coronary artery anomalies, 5% of incidence in population, account for 1 % of sudden cardiac death.28 Some of them may cause myocardial infarction depending on impairment of oxygen supply. The classification of anomalies maybe categorized as 1) anomalies of origination and course, 2) anomalies of intrinsic coronary arterial anatomy, 3) anomalies of coronary termination, and 4) anomalous anastomotic vessels.28 Myocardial infarction may often be seen in Anomalous origination of a Coronary Artery from the Opposite Sinus (ACAOS) with intramural course or preaortic course, ostial atresia or stenosis, and Anomalous origin of the Left Coronary Artery from the Pulmonary Artery (ALCAPA)29. But one of the most prevalent type resulting in MI is an anomaly of course, for instance, coronary bridging.

Coronary bridging is an abnormality of the arterial course which lies deeply into myocardium or is overlaid by muscular bridge. This abnormality was first described in the 18th century and was significantly emphasized in the 1980s as one of the potential cause of sudden death in the young. Because of its high prevalence in population (25 - 50 % of adult autopsy cases30), sometimes it might be considered to be a possible cause of death even though myocardial infarction is not anatomically detected. In such event, it should lie into myocardial layer deeply and long enough to be considered as a cause of death (greater than 2-3 mm in depth and 2-3 cm in length31). Taengtard and Phuangphung in 2014 found that the individual with significant coronary arteries bridging showed an increase in heart weight and presented with left ventricular hypertrophy.32 Myocardial infarction resulting from coronary bridging can also present in various stages of infarct-liked coronary atherosclerosis in etiology.33 Unless significant depth, length, or findings of hemodynamic disturbance are found, coronary bridging should be considered as a benign condition. 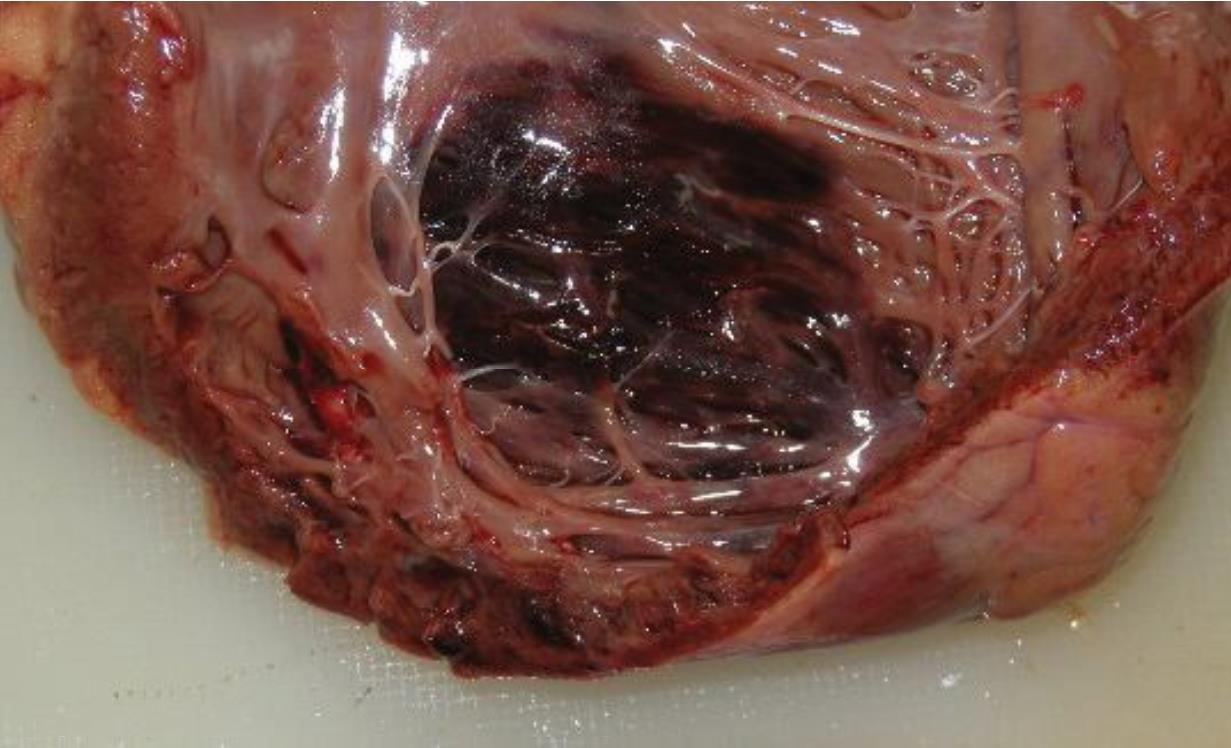 Figure 2 a 50-year-old man passed away in a hospital after involving in a traffic accident. The figure shows myocardial contusion in interventricular septum due to blunt chest trauma.

Coronary artery dissection may either be a traumatic or non-traumatic cause of separation of coronary arterial walls and creation of a false lumen34. Expanding intramural hematoma within the separated arterial wall can narrow luminal diameter. This pathology will decrease blood flow and subsequently results in myocardial infarction34. There are two proposed mechanisms of intramural hematoma formation. First, it is caused by intimal tear, and second, it may be due to a rupture of vasa vasorum of coronary artery34. On the other hand, arterial dissection from atherosclerosis (one of non-traumatic causes) tends to be less severe because medial atrophy and scar contraction may help preventing progression of hematoma35.

Among other non-traumatic causes of coronary artery dissection including fibromus-cular dysplasia, multiple pregnancy, systemic inflammatory diseases (systemic lupus erythematosus, Crohn’s disease, polyarteritis nodosa, and sarcoidosis), connective tissue disease, hormonal therapy ,and coronary artery spasm, fibromuscu-lar dysplasia was found to be the most common predisposing factor by the mechanism of fibroplasia, hyperplasia, and aneurysmal changes.34 Besides cellular pathological factors, physiological conditions such as pregnancy are thought to induce arterial dissection, in this instance, through hormonal changes.36

Tako-tsubo cardiomyopathy (TTC) or stress-induced cardiomyopathy is a form of cardiomyopathy characterized by angina-like chest pain, typical morphological change on echocardiogram (apical ballooning) resembling a style of Japanese octopus trap (tako-tsubo), and ST-segment elevation and/or T-wave inversion on ECG without obstructive coronary artery disease.37 The patients are predominantly post-menopausal females aggravated by stress37. Patients with TTC usually have more favorable prognosis and outcomes rather than acute myocardial infarction, with only 1-2.2% mortality rate in the acute period.37 However, several case reports described a group of TCC patients presenting with left ventricular free wall rupture, cardiac tamponade and death.40 Histopathology of cardiac tissue in these patients showed non-specific myocyte changes as same as in myocardial infarction from coronary artery disease. The findings include contraction band necrosis, transmural coagulative necrosis of myocyte with nuclei loss and polymorphonuclear leukocyte infiltration.40 These correlate well with the hypothesis of pathophysiology in TTC which was thought to be neurocardiogenic injury to myocardium from massive catecholamine dis-charge.39

Myocarditis is an inflammatory disease of myocardial tissue caused by infection, hypersensitivity reactions,or toxic substances. It could be sometimes one of the presentations in systemic inflammatory diseases. A patient with myocarditis may also present to the emergency department with clinical symptoms resembling those of myocardial infarction.41 Histopathology usually shows inflammatory cell infiltration, mostly lymphocytes, but neutrophils, eosinophils, or giant cells may be seen and giveclues to some specific etiologies.42

Myocardial infarction without coronary atherosclerosis, clinically termed MINCA, is not a rare condition in forensic practice. It can be diagnosed as either sudden unexpected death or unnatural death, depending on pathological and toxicological findings. Further study emphasizing on a pathological aspect should be conducted including postmortem investigations, causes, mechanisms, and pathophysiology to elucidate and establish the way of autopsy practice.