Contribution of MYC FISH in Pathological Diagnosis of Burkitt Lymphoma

Burkitt lymphoma (BL) is an aggressive B-cell non-Hodgkin lymphoma typically with MYC rearrangement. Distinction between BL and diffuse large B cell lymphoma (DLBCL) is not infrequently encountered in routine practice. In this communication, we report our experience with the MYC break-apart probe FISH in the diagnosis of BL in 19 cases of aggressive B-cell lymphoma. BL was the final diagnosis in 10/19 cases (52.63%), and 9 of them were shown to carry MYC gene rearrangement. DLBCL was the final diagnosis in 7 cases and all had negative FISH test. B-cell lymphoma, unclassifiable, with features intermediate between DLBCL and BL were diagnosed in the remaining 2 cases, and one of them showed MYC rearrangement. To summarize, identification of MYC gene rearrangement by FISH assay helps supporting the diagnosis of BL in most of the cases.

Burkitt lymphoma (BL) was first described by Denis Burkitt in 19581. It is an aggressive non- Hodgkin lymphoma of B-cell lineage. Since the original description, tremendous progress has been made in understanding molecular mechanisms of the cancer. Pathological diagnostic criteria have been changed and it is now clear that traditional morphological approach alone is not sufficient to make a firm diagnosis of BL.

One of the fairly common differential diagnoses in routine pathological practice is to distinguish between BL and diffuse large B cell lymphoma (DLBCL). Since dysregulation of MYC gene, mostly commonly t(8; 14) (q24;q32), features all cases of BL, assessment of the gene is diagnostically helpful2. In this communication, we report our experience with the MYC break-apart probe FISH in the diagnosis of BL.

For all cases, the histologic differential diagnosis was between DLBCL and BL. The demographic data (age, gender, and site of lesion), immunophenotype, and MYC FISH result were recorded. Materials used in all cases were formalin-fixed paraffin-embedded tissue. Details of the antibodies used were shown in Table 1. MYC FISH was performed by break-apart (split signal) DNA probe (DAKO, Code Y5410). Translocation involving the MYC gene was scored when a specific signal pattern (co-localization of one pair of signals and segregation of the other, see Figure 1) was identified by a non-numerical approach3. Final diagnosis was rendered by combining the FISH result and other parameters. 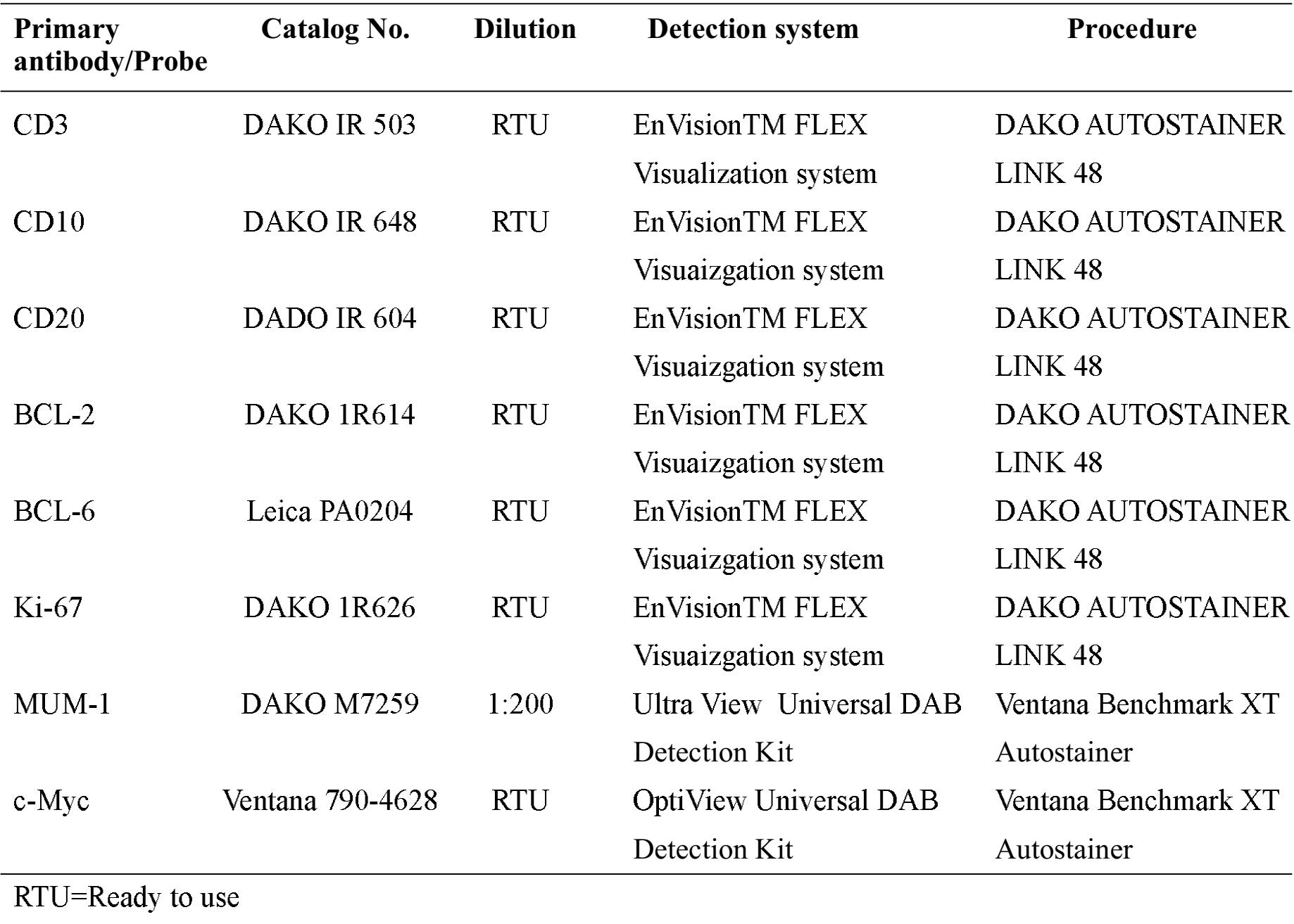 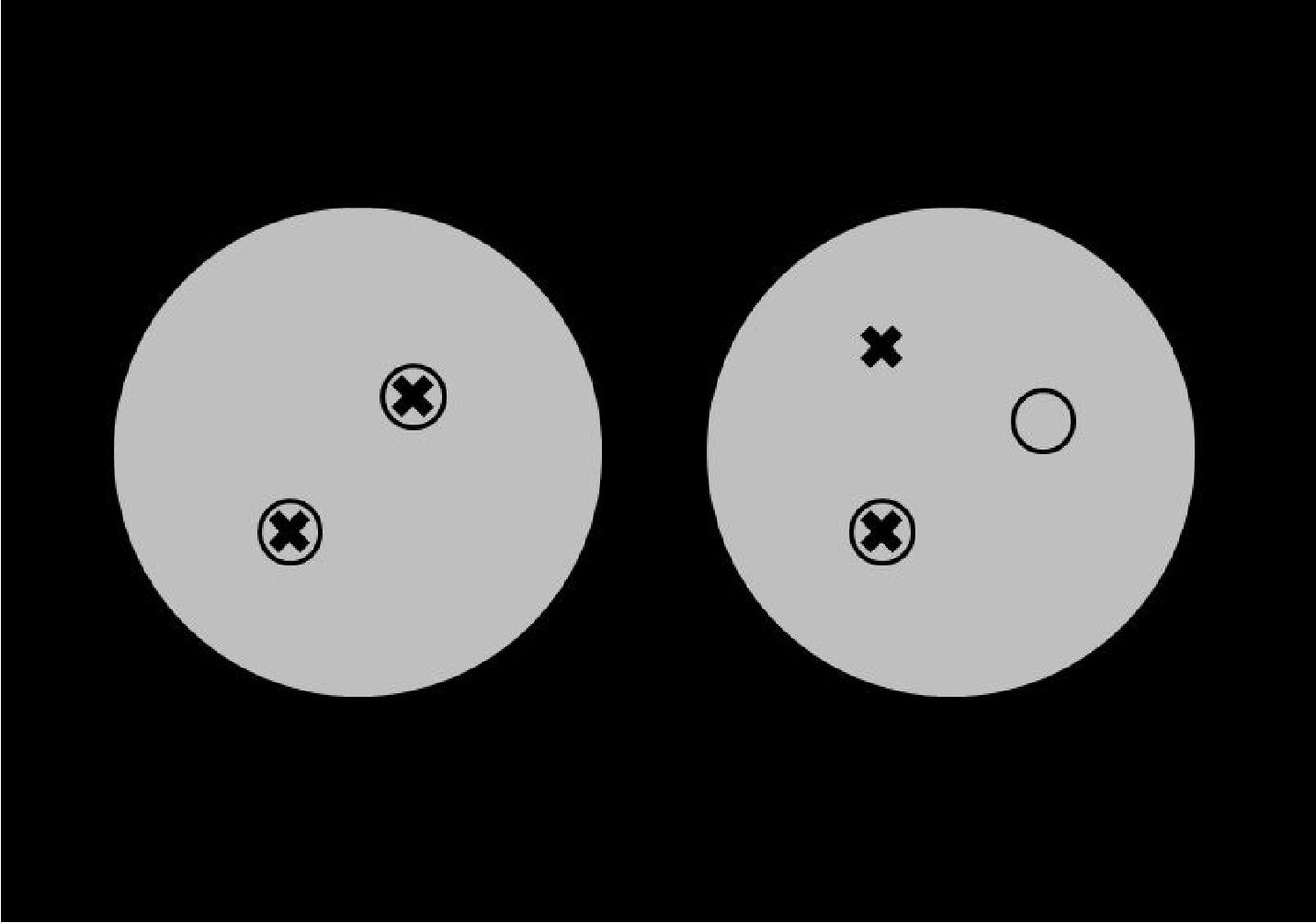 The patients’ age ranged from 9-89 years (mean = 47.47). There were 5 females and 14 males. Anatomical site, histopathology (nuclear size and starry-sky pattern), immunophenotype, MYC FISH result, and the final diagnosis of all cases were shown in Table 2. One BL (case # 19) tested for EBV showed positive result of EBER in situ hybridization.

Table 2 Details of cases and results 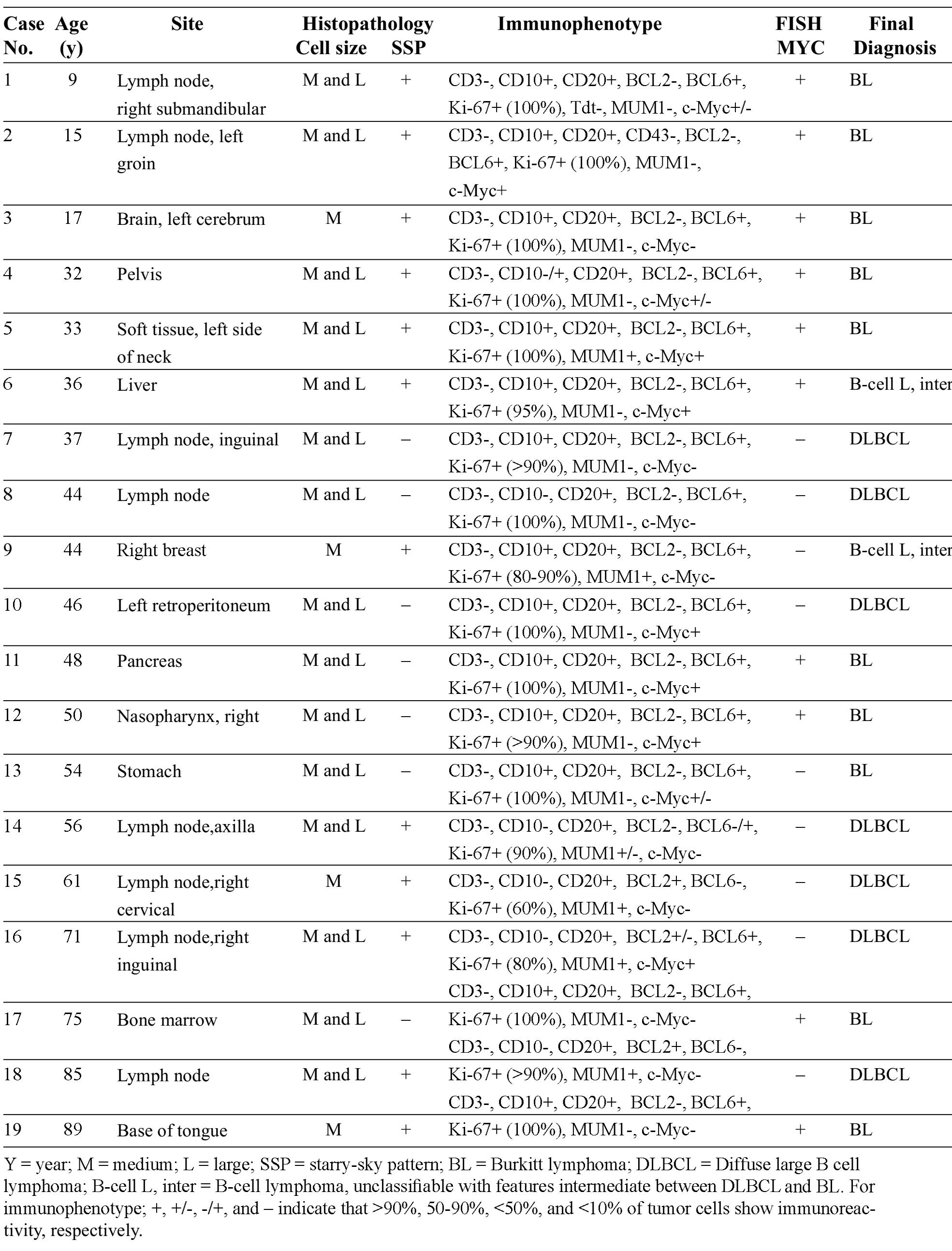 Distinction between diffuse large B cell lymphoma (DLBCL) and Burkitt lymphoma (BL) is a fairly common differential diagnosis in daily practice, and it is crucial since the latter requires more aggressive treatment. BL is high grade B-cell lymphoma that is characterized histologically by monomorphic proliferation of medium-sized non-cleaved malignant cells, with round nuclei, clumped chromatin, two to five nucleoli, medium-sized paracentral nucleoli, cytoplasmic vacuoles, and an appreciable rim of basophilic cytoplasm. Nuclear and cell membrane of the individual tumor cells frequently show molding or “Square-off’. High mitotic rate with “starry-sky” pattern imparted by tangible-body macrophages is characteristics, but not pathognomonic. DLBCL, despite the name implies (“large” cell), the size of tumor cells may be overlapped with that of BL. Furthermore, starry-sky pattern could also be encountered in DLBCL2.

Diagnosis of BL is currently based on several parameters, including histomorphology, immunophenotype, cytogenetic, molecular study, and gene expression profiles; since there is no single test that can be used as gold standard for the diagnosis4. Immunohistochemical study is helpful, to some extent, in the differential diagnosis between DLBCL and BL, and the typical profile is summarized in Table 3. 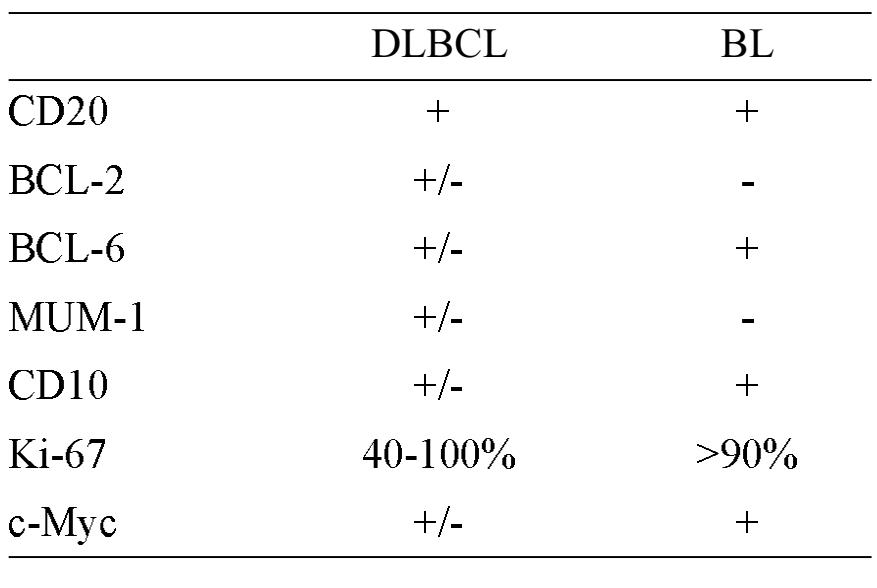 Despite the IHC panel, diagnosis can still be ambiguous, and assessment of MYC gene rearrangement is needed. Having said that, translocation involving MYC gene, though characteristic, is not specific for BL. Furthermore, diagnosis of BL can still be made when MYC FISH test is negative if all other features (morphology, CD20+, CD10+, BCL6+, BCL2-, and Ki67+ >95%) fit well with the diagnosis 2, 5.

In 2008, a new category of B cell neoplasm, “B-cell lymphoma, unclassifiable, with features intermediate between DLBCL and BL” was introduced by the World Health Organization2. Diagnostic criteria of the entity include (1) morphologic overlap between DLBCL and BL with typical im-munophenotype of BL, (2) morphologic features of BL with atypical immunophenotype, and (3) MYC rearrangement with concomitant BCL2 and/or BCL6 rearrangement (so called double-hit lymphomas)2,6.

In our cohort of 19 B-cell lymphomas with the differential diagnosis between DLBCL and BL, positive MYC FISH supported the diagnosis of BL in 9 out of 10 cases. For the remaining BL case (#13) where FISH was negative, the diagnosis was based on clinical data, histomorphology and immunohis-tochemistry (IHC). 7/19 patients were diagnosed as having DLBCL and all of these tumors showed negative result of MYC FISH. It is important to note that discrepancy between c-Myc IHC and MYC FISH was found in 6/19 cases (31.58%): 3 cases with positive IHC but negative FISH (#10, 13, 16), and the others with the opposite result (#3, 17, 19). Mechanisms other than gene rearrangement may underlie the positive IHC in the former 3 cases whereas antigen loss may have resulted in the negative IHC (positive FISH) in the latter. B-cell lymphoma, unclassifiable, with features intermediate between DLBCL and BL were diagnosed in 2 cases (cases # 6 and 9). The former case had overlapping morphological features between DLBCL and BL but typical immunophenotype of BL and positive FISH result; the latter showed typical BL morphology but atypical immunoprofile and no MYC rearrangement.

In summary, several parameters are required for the distinction between diffuse large B cell lymphoma (DLBCL) and Burkitt lymphoma (BL). In addition to morphology and immunoprofile, identification of MYC gene rearrangement by Ff SH assay helps supporting the diagnosis of BL in most cases.