Results: Patients <40 years constituted 20%. Right and left-sided CRC constituted 34.5% and 63.5% respectively. KRAS mutation was seen in 18.2% and BRAF (V600E) in 0%. No association was found between KRAS mutation and clinicopathological features. All mCRC cases were wild except one. Patients aged <40 years showed lower mutation rate (13.6%) than patients of >40 years (21.6%). Young age was significantly associated with perineural invasion and necrosis. Right-sided tumors were significantly larger (>4 cm) than left-sided, had lower stage and lymphnode metastasis.

Colorectal cancer (CRC) is the third most common cancer in males and second most common cancer in females worldwide, however its frequency is quite low in the south Asian countries [1]. In Indian registries, incidence of rectal cancer is reported to be higher than colon cancer [2,3]. The localized CRC without lymph nodal metastasis may be cured by surgery alone, however the prognosis of metastatic disease is worse even after adjuvant chemotherapy or radiotherapy due to relapse of the disease in approximately 34% cases [4] which raises concern for development of more specific and targeted therapies to prevent relapse of disease in advanced cases of CRC. Monoclonal antibodies like cetuximab and panitumumab [5,6] are being currently used to target EGFR especially in metastatic CRC. The response of anti-EGFR therapy is determined by mutation status of downstream biomarkers (KRAS, BRAF) that influence cell proliferation, angiogenesis and migration [7-10]. CRC with wild type KRAS are believed to respond to anti-EGFR therapies, however 40-60% of patients with wild-type KRAS tumors do not respond to such therapy [11]. In these patients, data suggest that the mutated BRAF gene, which is present in 5-10% of tumors, can affect response to these agents [12-14]. Both the costs and potential toxicities associated with this management paradigm adds to the relevance of efforts to more critically define particular patient populations that would be most likely to respond to treatment with this class of agents, or, conversely, that would be highly unlikely to exhibit clinical benefit.

The mutation frequencies of various oncogenes and molecular biomarkers vary widely in different regions and in different populations. This study was planned with an aim to evaluate the mutation status of KRAS exon 1 and BRAF exon 15 in CRC and its correlation with clinicopathological parameters and followup in north Indian population.

Consecutive cases of CRCs received within a period of 3 years in the Department of Pathology were included for this study. All the cases were reviewed for gross (size, location) and microscopic features (tumor differentiation, extent of infiltration, perineural and lymphovascular invasion, necrosis, presence of tumor infiltrating lymphocytes, mucinous areas and lymph node and distant metastases). The DNA was extracted from formalin fixed paraffin embedded tissues containing >90% tumor area. QiaAmp FFPE DNA extraction kit was used for DNA extraction. Mutation analysis for KRAS exon 2 and BRAF exon 15 was done by PCR-Sanger sequencing. The primer sequences and PCR cycles used in the study are given in table 1. Follow-up data was retrieved from the case files and Hospital Information System. 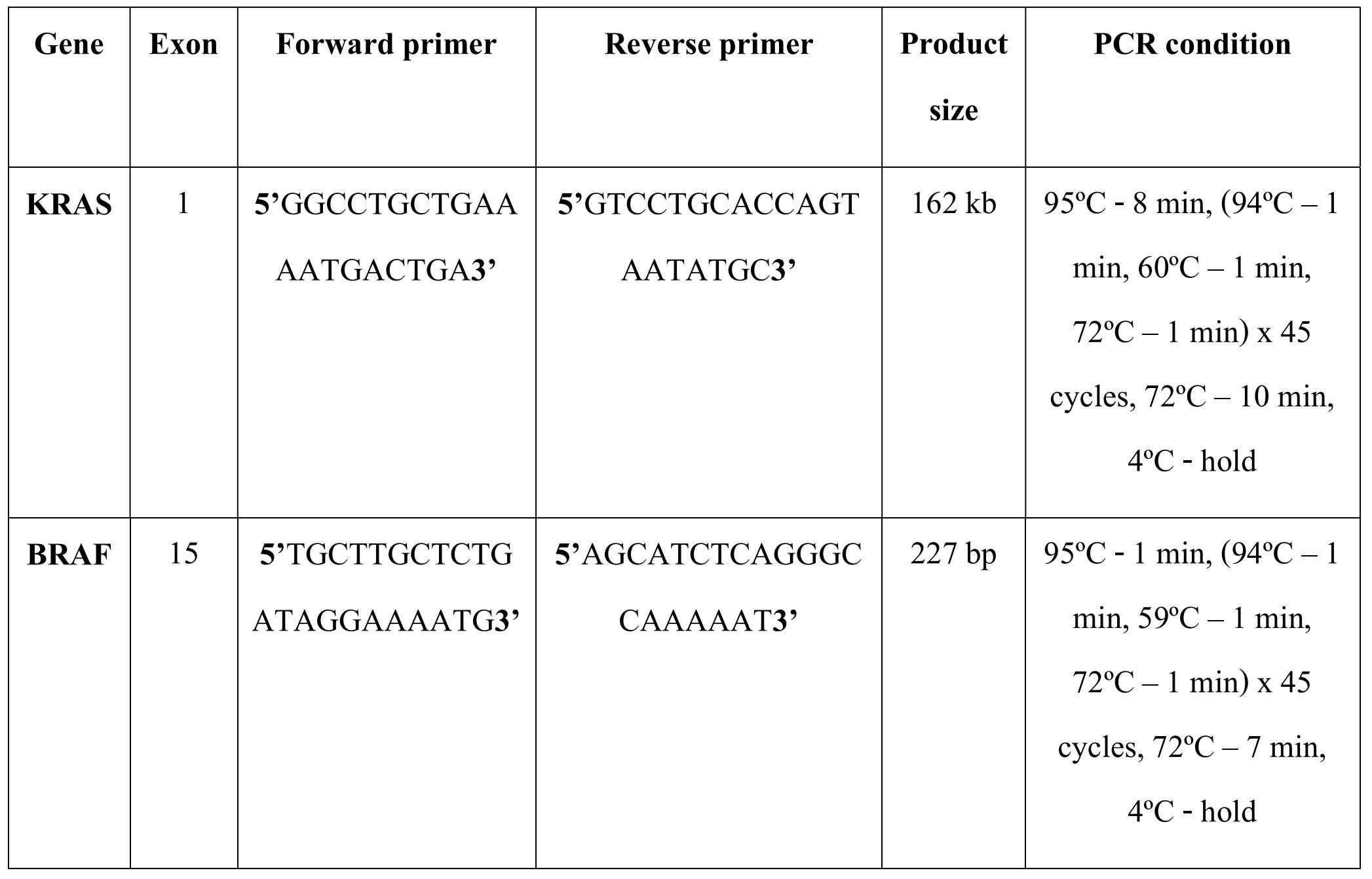 One hundred and ten consecutive cases of CRC were evaluated with M:F ratio of 2.5:1 (79 men, 31 women) having an age range of 23 years to 86 years (median 51 years, mean 52.5 years). Twenty-two patients (20%) were of age less than 40 years. The predominant histological type was conventional adenocarcinoma (92 cases) followed by mucinous and signet ring cell adenocarcinoma (16 cases) and papillary adenocarcinoma (2 cases). Proximal (right sided colon) CRCs accounted for 38 cases (34.5 %) and distal (left sided colon and rectum) accounted for 72 cases (63.5%), however, equal distribution was seen in colonic and rectal locations with each site accounting for 55 cases. KRAS mutation was detected in 20 (18.2%) cases. KRAS codon 12 mutations were seen in 12 (65%) cases and codon 13 in 7 (35%) cases (Figure 1a, 1b, 1c). Three different mutations were seen in codon 12. The commonest one was G12A, which was found in 9 cases followed by G12V in 3 cases and one case showed G12S. All 7 cases of codon 13 mutations were of G13A. BRAF V600E was not seen in any case, however two cases (1.8%) showed R603L and L588P mutations (Figure 2a, 2b). Two other cases showed single nucleotide polymorphisms (SNPs) at Q609Q and S602S and both these cases had mutation in KRAS gene. KRAS and BRAF mutation was seen equally in both proximal and distal CRCs, however KRAS mutation was marginally higher in colonic CRCs (12 cases, 60%) than rectal CRCs (8 cases, 40%). 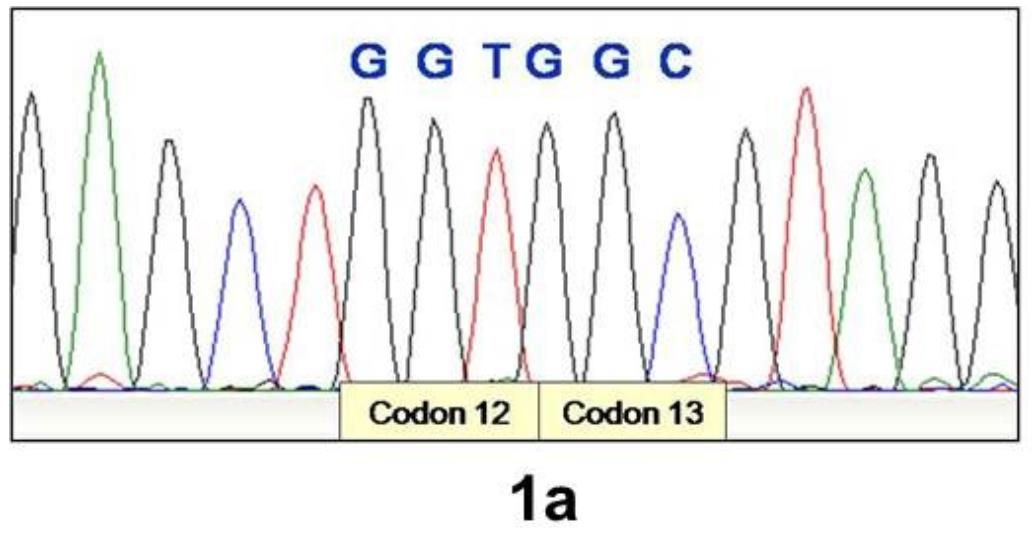 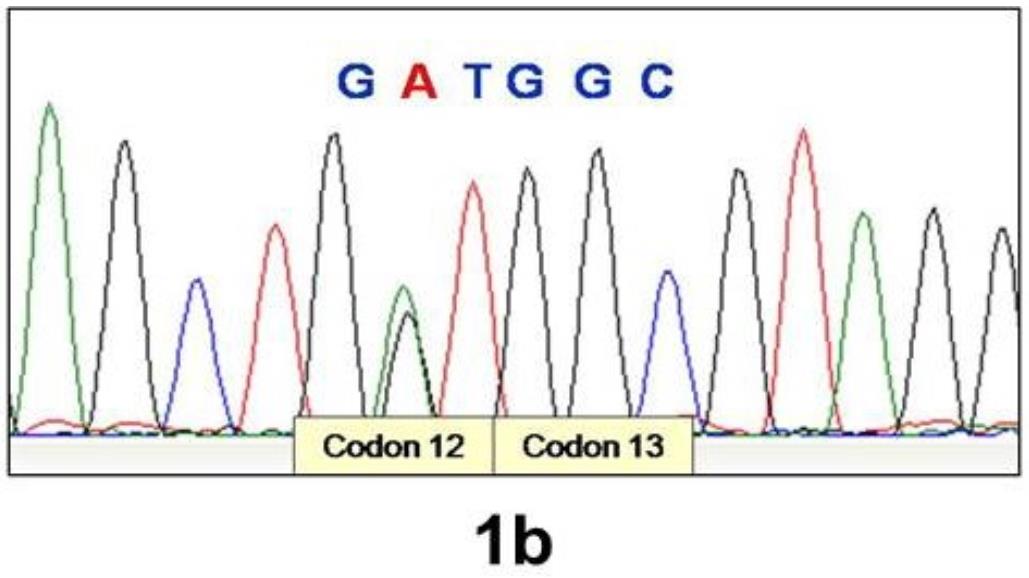 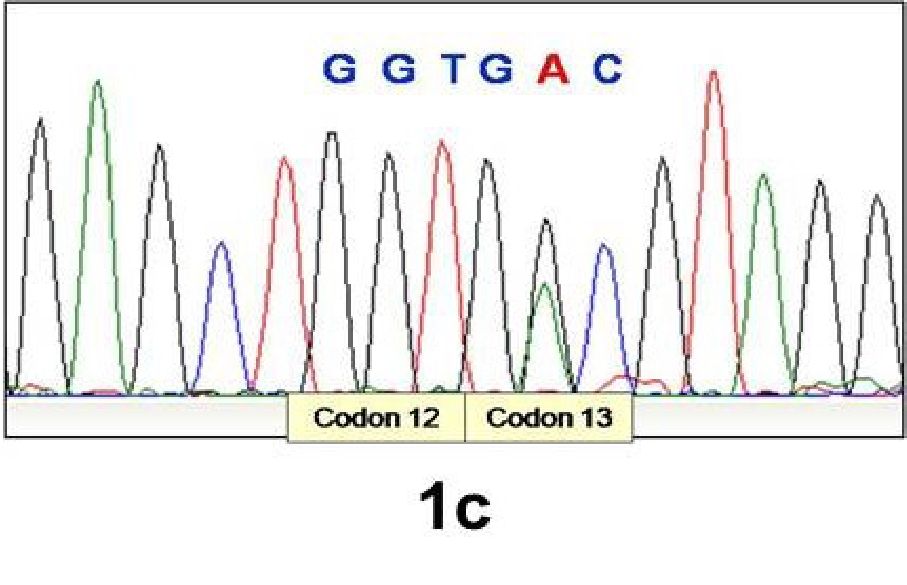 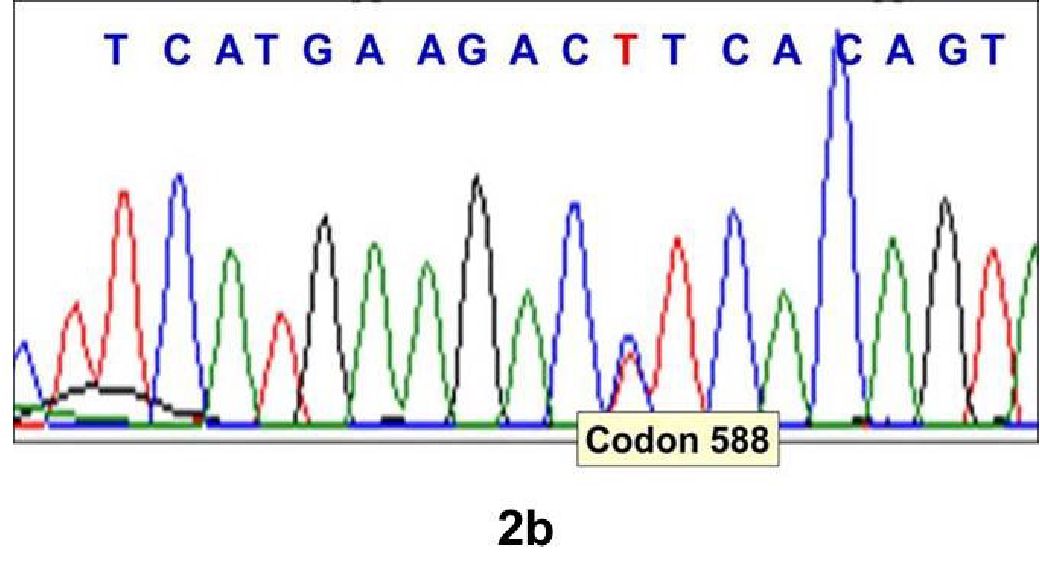 Twenty percent cases (22 patients) with CRC were aged 40 years or younger. Three of the 22 patients aged 40 years and younger (13.6%) showed mutations with two cases (9.1%) harboring KRAS mutation and one case (4.5%) harboring BRAF mutation. In the age group of more than 40 years, 19 cases (21.6%) showed mutation with 18 cases (81.8%) harboring KRAS and one case (1.1%) harboring BRAF mutation. Younger age (<40 years) at presentation was significantly associated with perineural invasion (p=0.04) and necrosis (p=0.04) whereas distant metastasis showed a p value of 0.05. In both the age groups proximal colonic CRCs were more common than distal CRC, however younger patients had more of rectal involvement whereas patients aged more than 40 years had more colonic involvement (table 4). 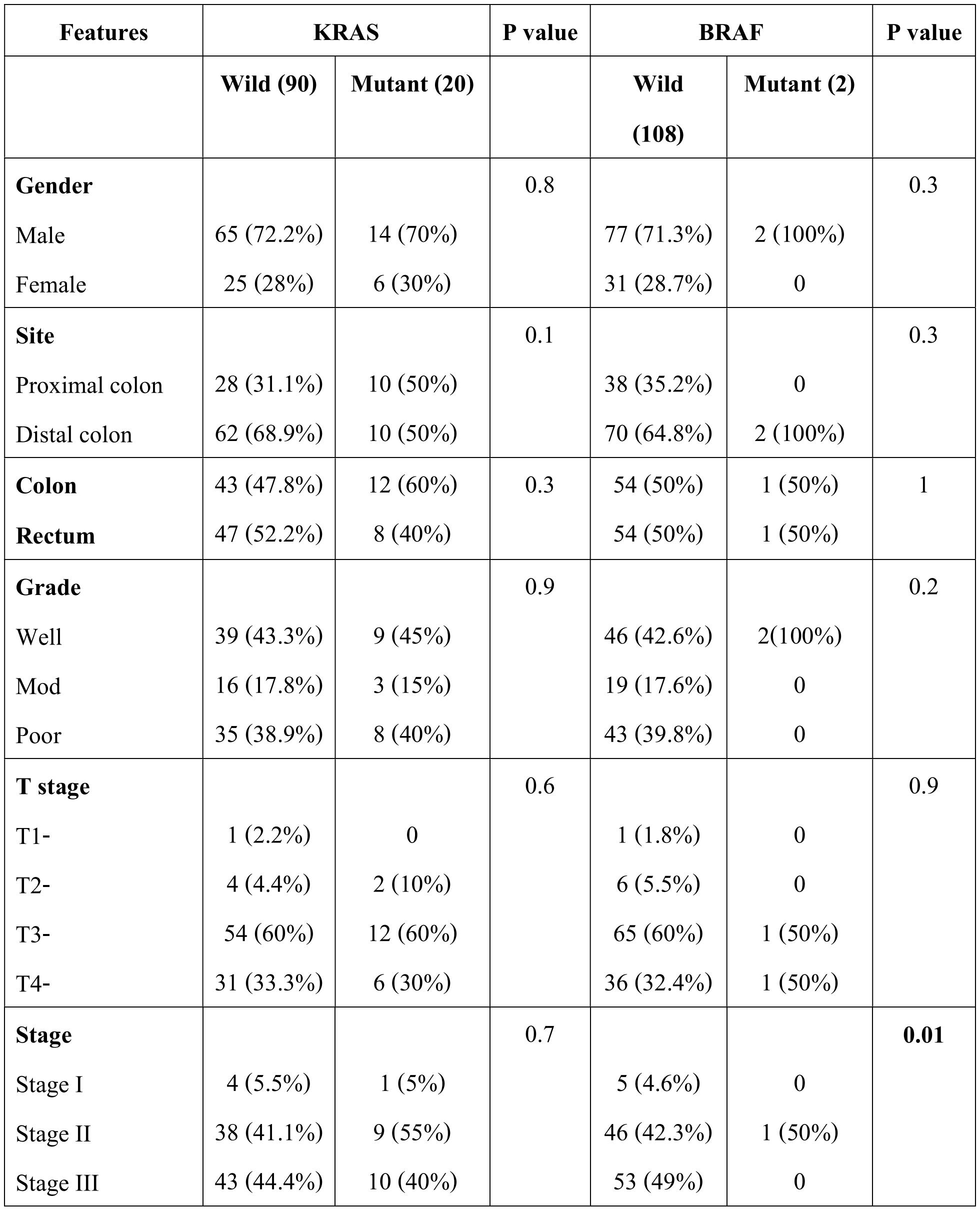 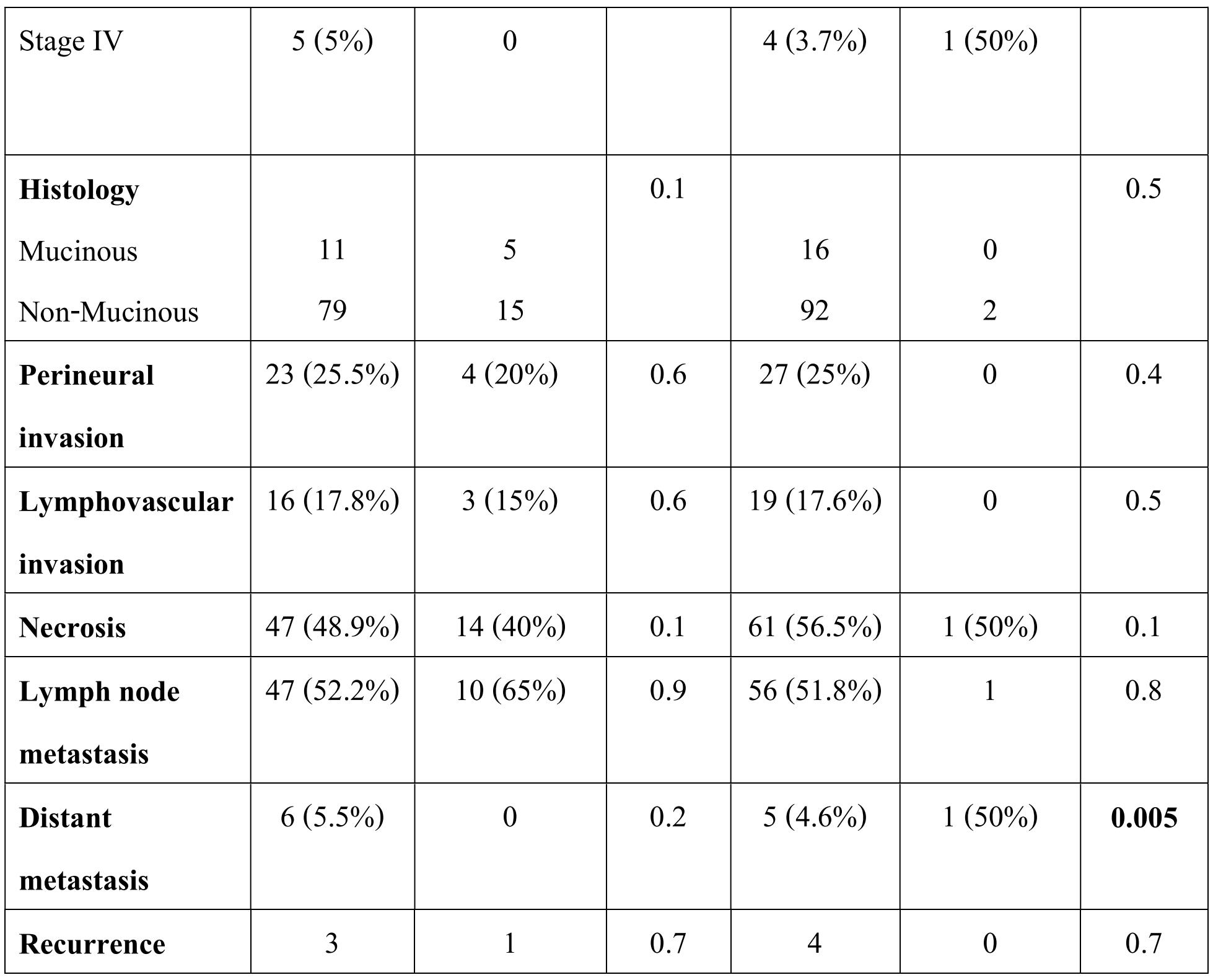 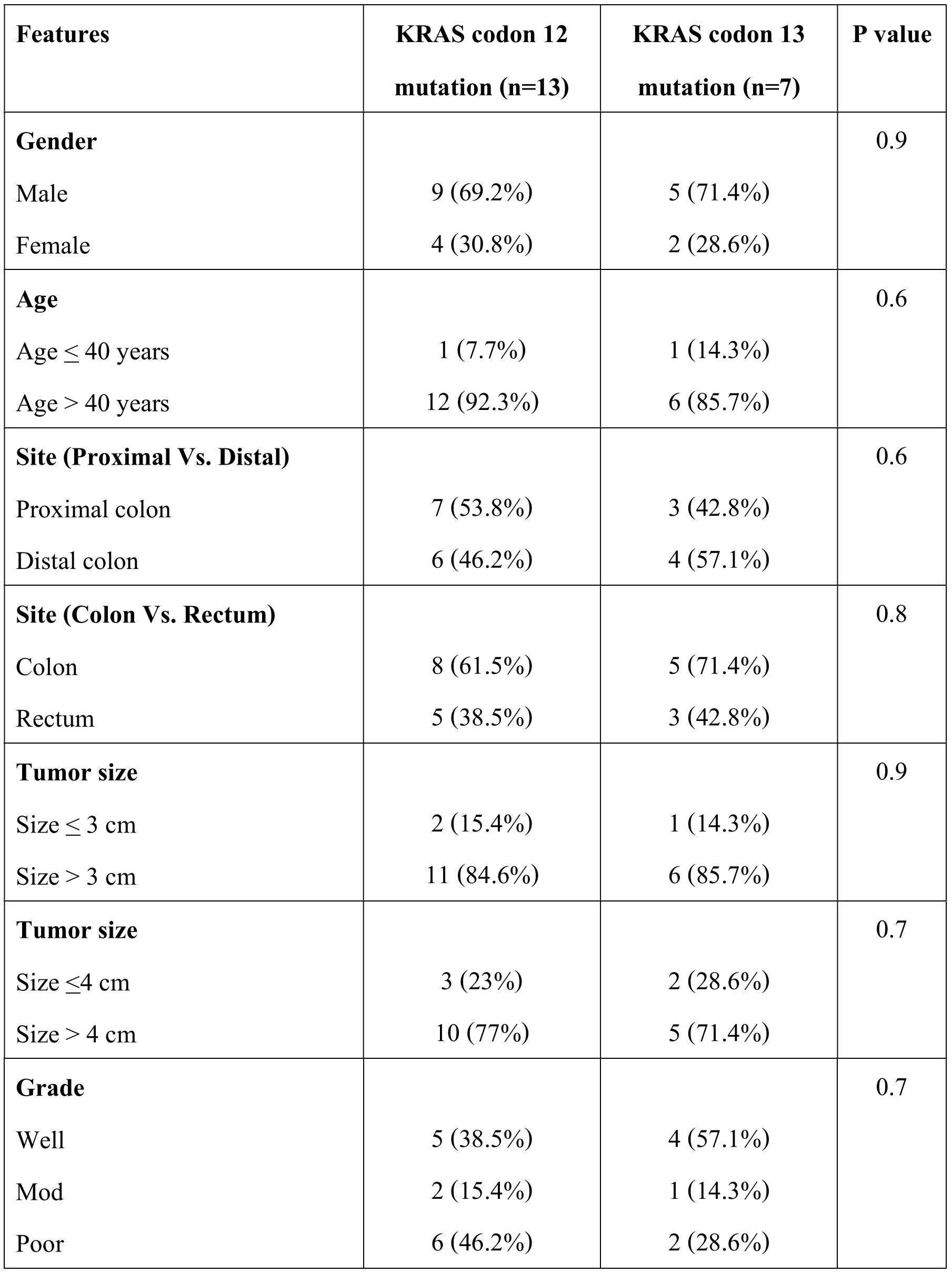 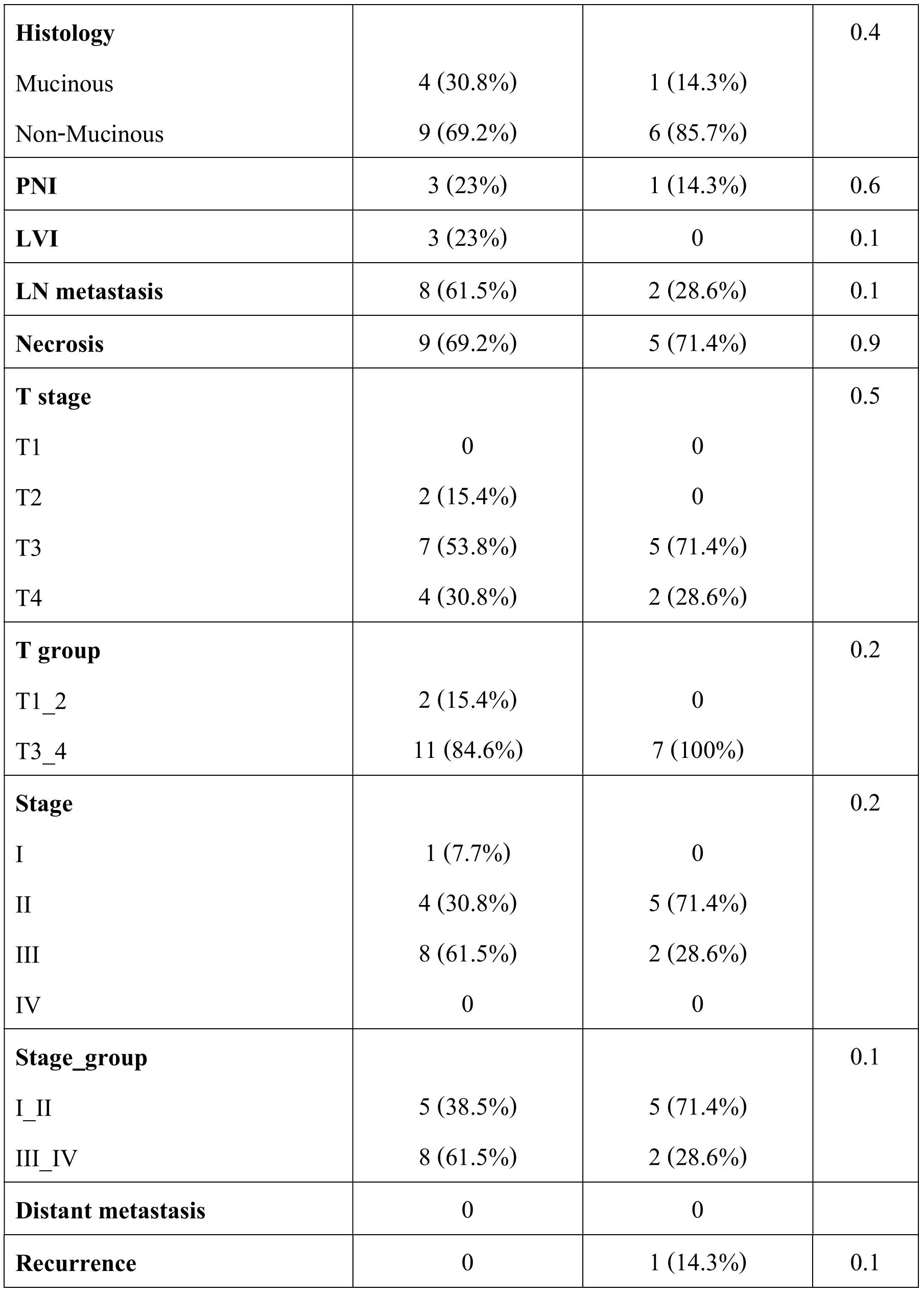 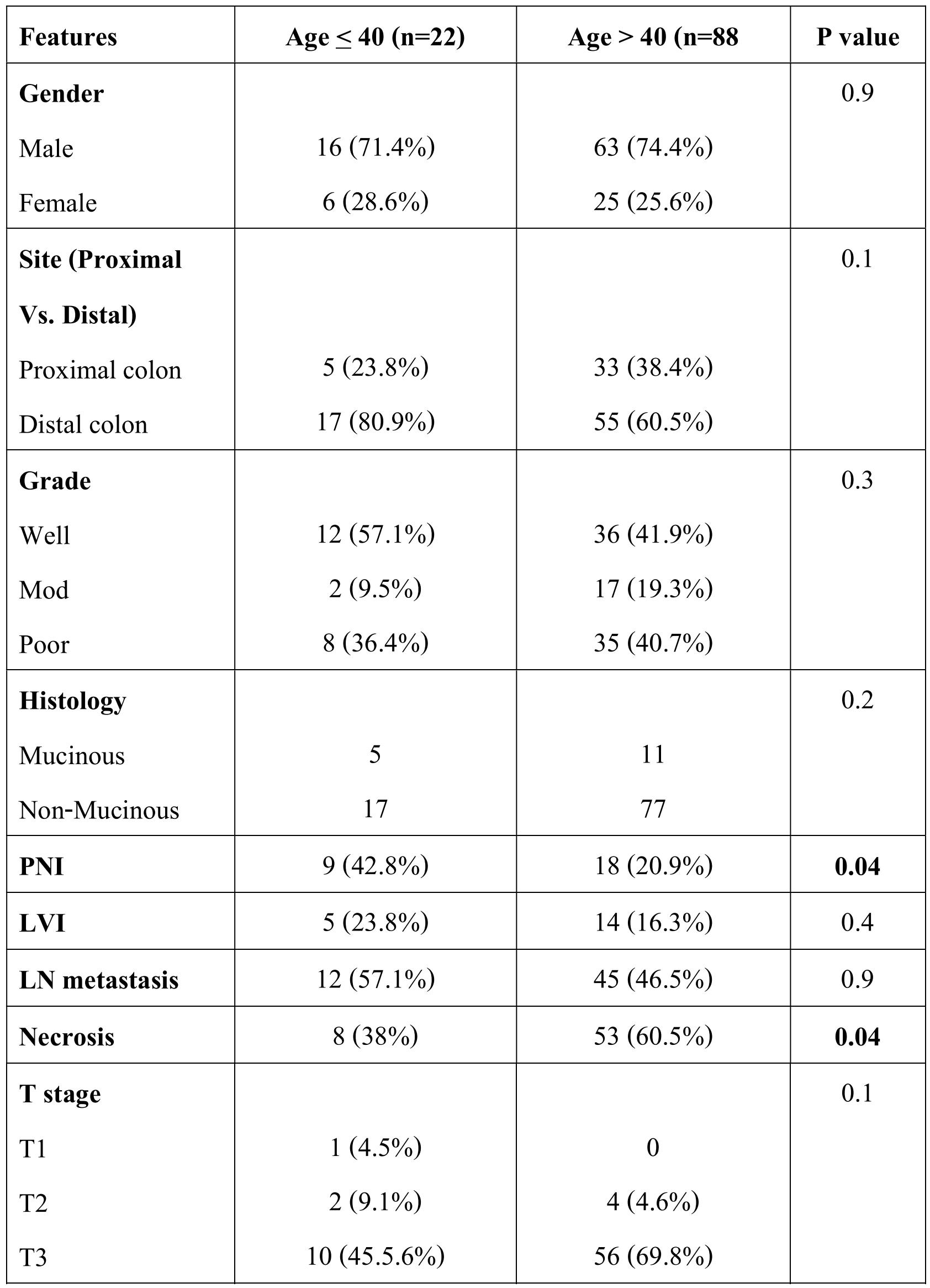 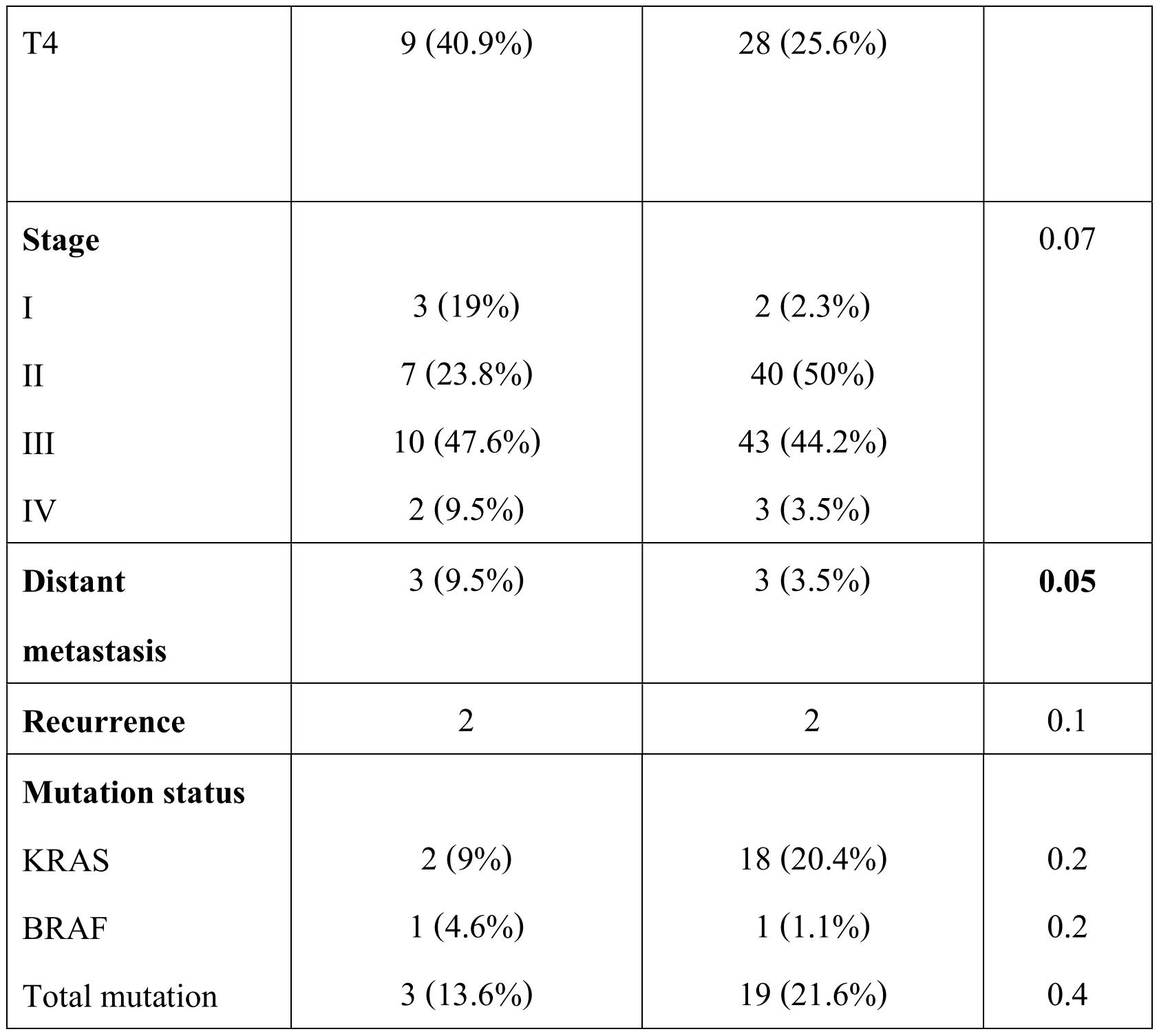 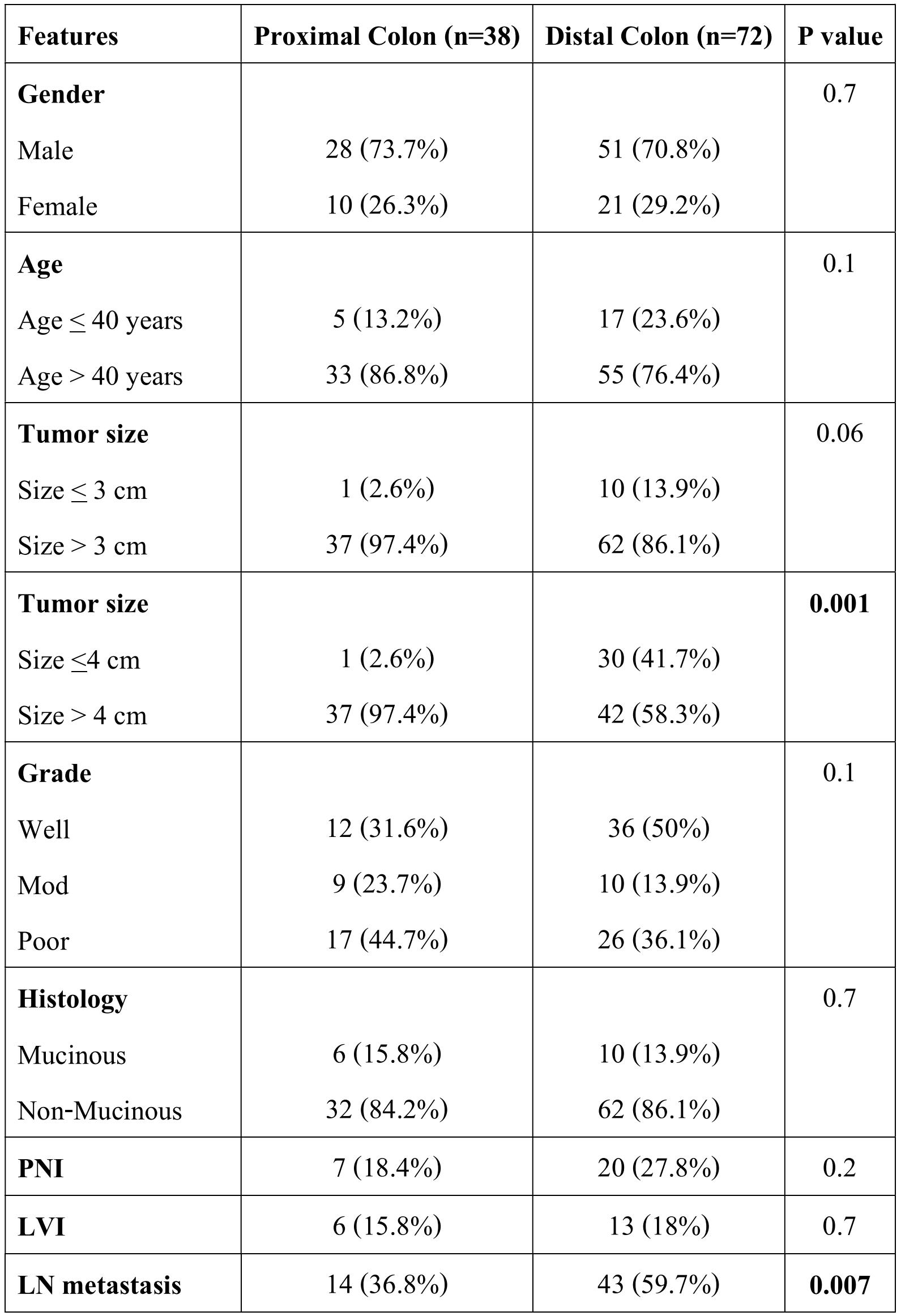 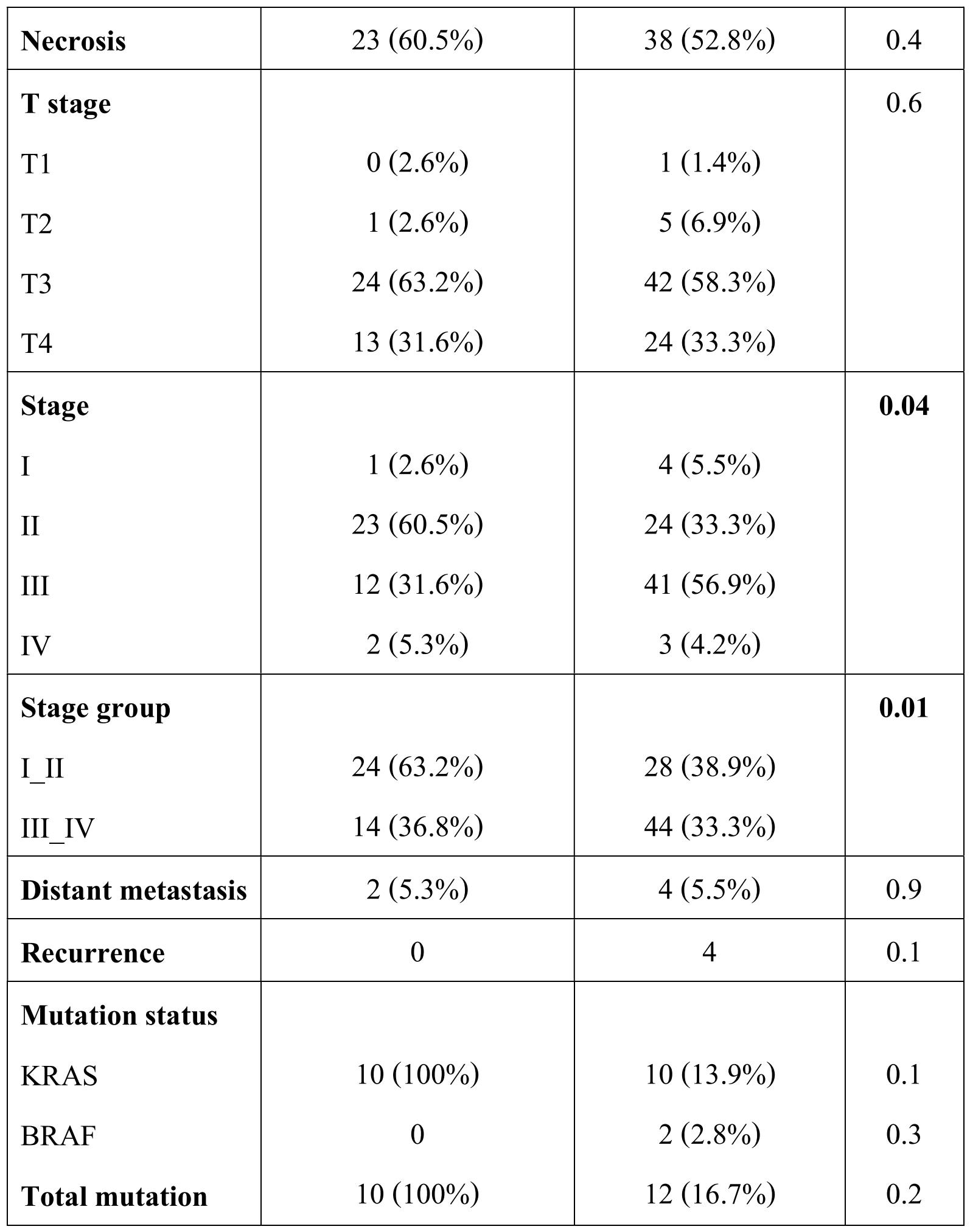 Colorectal cancer is less common in Indians than the western population with an age adjusted incidence rates of 4.2 for males and 3.2 for females per 100000 populations as opposed to 35.3 and 25.7 per 100000 respectively in United States. Approximately 90% of CRC occurs in more than 50 years of age, however the incidence is increasing in younger patients of less than 40 years age in the recent past [15]. In the present study 20% of patients were less than 40 years of age. Targeted therapy with anti-EGFR monoclonal antibodies has been approved in metastatic (stage IV) CRC with better tolerance and improved survival. The National Comprehensive Cancer Network (NCCN) Clinical Practice Guidelines recommend testing for KRAS mutations at the time of diagnosis of stage IV disease so as to better prepare an appropriate management plan in case treatment with an anti-EGFR antibody is later considered [16]. The KRAS mutation rate has been reported in the range of 22% to 40% [17-22] and that BRAF between 0% to 17% in different studies across the world [9,18,19,23-26]. The prevalence of KRAS mutation has been found to be lower in Indian patients as compared to other Asian studies and western population [20-22,27-29]. In the present study KRAS mutation was detected in 18.2% cases which are nearly similar to that reported in other Indian studies from north and west parts of India, [17-19] however the distribution of codon 12 and codon 13 mutations were almost similar to the previously reported studies. However, one study from south India showed KRAS mutation frequency of 46. 8% [30]. We did not find V600E mutation in our study, however two (1.8%) other reported mutations were found, the role of the same on prognosis is not well described in the literature because of its rarity. This is in contrast to that reported by Bagadi et al and Bisht et al from India [18,19] as well as from other Asian studies [28-31]. The mutation rate in BRAF varies widely even in the western population from 0 to 15% [23-25]. Low rate of KRAS mutations found in the present study are in accordance with those found from other parts of India,[17-19] however reason for low rate BRAF mutations along with absence of V600E is largely unexplained and should be supported or negated by carrying out larger studies in different parts of our country. One of the possible reasons could be variation in dietary habits and environmental factors in different parts of the country.

Moreover role of anti-EGFR therapy has been recommended in metastatic or advanced CRC. In the present study, according to the current NCCN guidelines [16] there were only 6 cases of metastatic CRC, which were candidates for anti-EGFR therapy and thus ideally suitable for KRAS-BRAF testing. In countries where most of the patients are of low socio-economic group, hardly 10% of metastatic CRC patients would afford for the anti-EGFR therapy and molecular biomarker testing. Going by the data of the present study, there would be one to two cases of CRC out of 110 cases that would need and may afford biomarker testing for anti-EGFR therapy. With limited resources, it would be preferable to start with KRAS mutation testing in metastatic disease followed by BRAF testing if KRAS is wild type. Although the current NCCN recommends extended RAS and BRAF with deficient mismatch repair / microsatellite instability testing, we suggest that exon 1 of KRAS and exon 15 of BRAF would be tested first, as these two exons cover nearly 90% [16,20,2325] of mutations occurring in these markers, followed by other exons of KRAS and NRAS and MSI testing in countries with low socio-economic group where health care burden is to borne by the patients themselves.

The present study shows a lower rate of KRAS mutations and rare BRAF mutations in CRC in Indian patients. However all the metastatic CRCs were wild type for KRAS except one which showed the rare BRAF mutation (p.R603L), significance of which is not well known. The younger age (<40 years) at presentation and anatomic location but not the mutation status of KRAS or BRAF showed significant association with tumor size, perineural invasion, necrosis, disease stage and lymph node metastasis. In countries with low socio-economic conditions, metastatic CRCs should be chosen judiciously for molecular biomarker testing and anti-EGFR therapy, preferably starting with common mutations first and then going to extended panel. This will reduce the extra burden on patients who can barely afford the minimum required treatment of their advanced disease.

Conflict of interest: None